The economy is still strong but with US economic growth peaking, the maturing US mid-cycle offers both a constructive expansion and a more volatile backdrop for markets that have already priced in a lot of good news.

As observed in our last Investment Strategy and Outlook 2022 part 1. the general environment might see some slowing.

The latest ISM indicator figure confirmed the trend as December ISM Manufacturing printed 58.7, well below the 60.0 expected and the 61.1 prior as it caught down to the 12-month lows of Markit’s measure. Orders dropped modestly also. The ISM’s factory production measure slipped to 59.2, the lowest since July but robust by historical standards.

Looking at the our proprietary ABS Matrix (DEFINITION here)-below- it can point to some clues for our strategy (according to your style/factor) as we tend to readjust the sector allocation accordingly, although we expect hesitations between the transition phases and rapid rotations between the leading and lagging sectors. Rapid changes in trends, inflation, market uncertainty, and a less accommodating Federal Reserve means investors need to have a realistic expectation of potential returns. 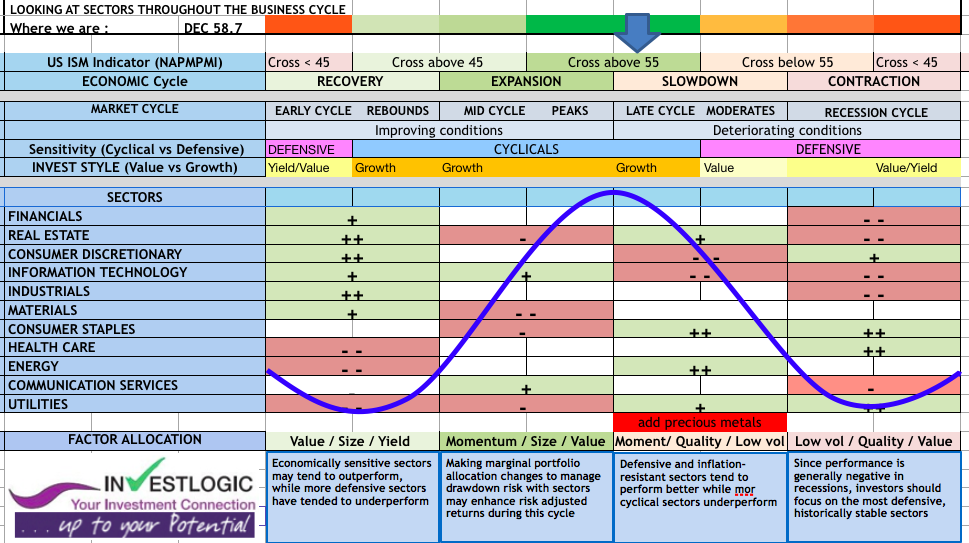 Note: The typical business cycle shown above is a hypothetical illustration. There is not always a chronological progression in this order, and in past cycles the economy has skipped a phase or retraced an earlier one. Unshaded (white) portions above suggest no clear pattern of over- or underperformance vs. broader market. Double +/– signs indicate that the sector is showing a consistent signal across all three metrics: full-phase average performance, median monthly difference, and cycle hit rate. A single +/– indicates a mixed or less consistent signal.

What sectors, styles and strategies worked in 2021 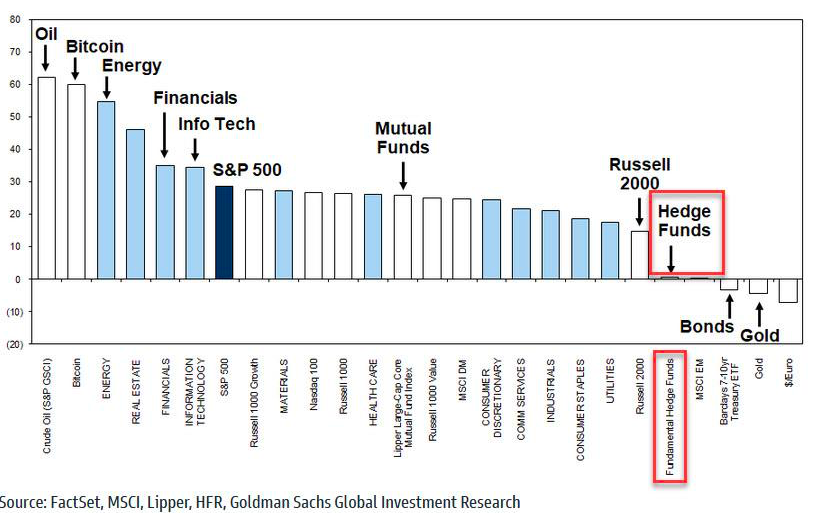 Mid-cycle environments have historically favored riskier assets such as growth stocks, but they also tend to experience the highest incidence of stock-market corrections (10% to 20% selloffs).

The US tech sector (and also the FAANGs) could hold the key for markets. Unlike any other major equity market, the S&P is dominated by these stocks and if they go belly up, inevitably so too does the whole market. The following chart shows that although until recently there had been a supportive underlying earnings story, now the sector has become reliant on massive multiple expansion relative to the rest of the market. 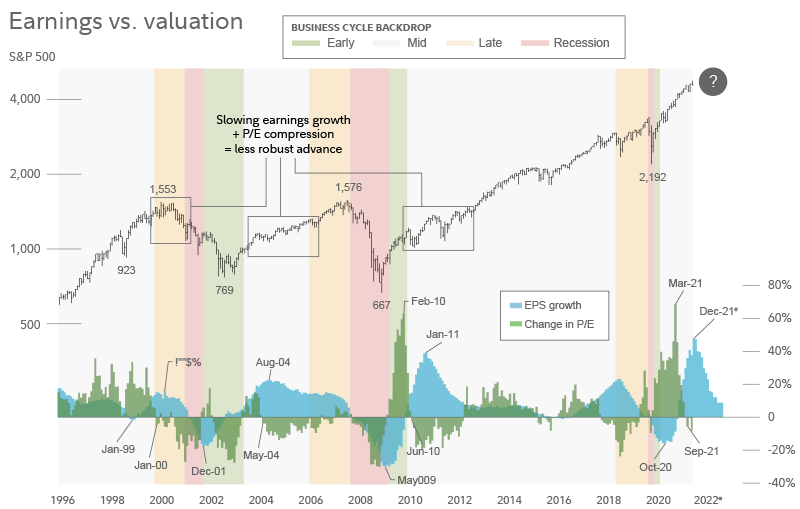 As for which sectors of the stock market offer the most upside, Wall Street analysts are, again, all over the map. After all, there are 11 sectors in the S&P 500 to choose from.
Looking at the Bloomberg’ tables, sector strategy shows a break-up of cyclical trade is likely, and is leaning back into tech.

Factor strategy favors momentum and low volatility above others

Note that  smaller stocks are still showing a relative undervaluation. 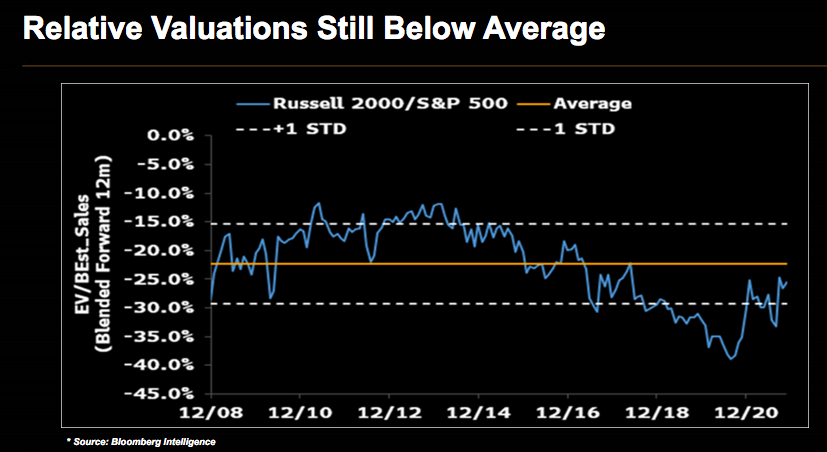 TINA is still at work

Sector Rotation is the movement of money in the stock market from one sector (industry) to another as investors anticipate the next phase of the economic cycle.
We continue to favour those stocks and sectors that are more sensitive to the economic cycle and that continue to benefit from the above-trend momentum. While the economic reopening in the broader sense may have been dampened a little by this latest wave of Covid infections, the recovery continues nonetheless, and as solid growth in earnings and economic data prevails, it remains our view that the so-called re-opening trades can continue to perform with potential still to be captured.

Looking at the heat indicator Ten of the 11 sectors show a significant green majority in the group i. We can see our top sector are energy and financials, as well as technology which will continue to be at the heart of productivity gains and our consumption patterns – so this sector will be central in the choice of stocks to be put in portfolios. 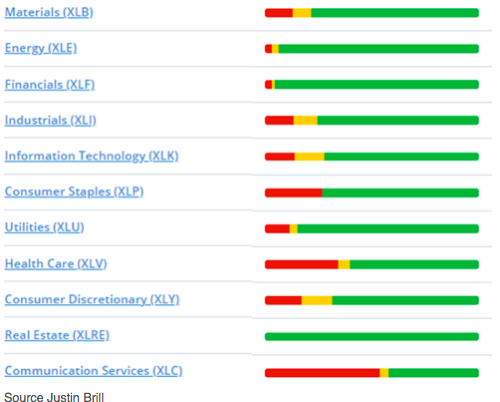 We like to focus on sectors that are leading. That’s especially true if they have just crossed from improving into a leading position.

Of course, this doesn’t mean the market can’t move lower in the near term. But it does tell us that any additional downside is likely to be a temporary correction rather than the start of a more severe decline.
It will also be necessary to increase the weight of yielding assets, intended to stabilize performance, in view of the growing feverishness and a more limited expectation of performance in the equity compartment. 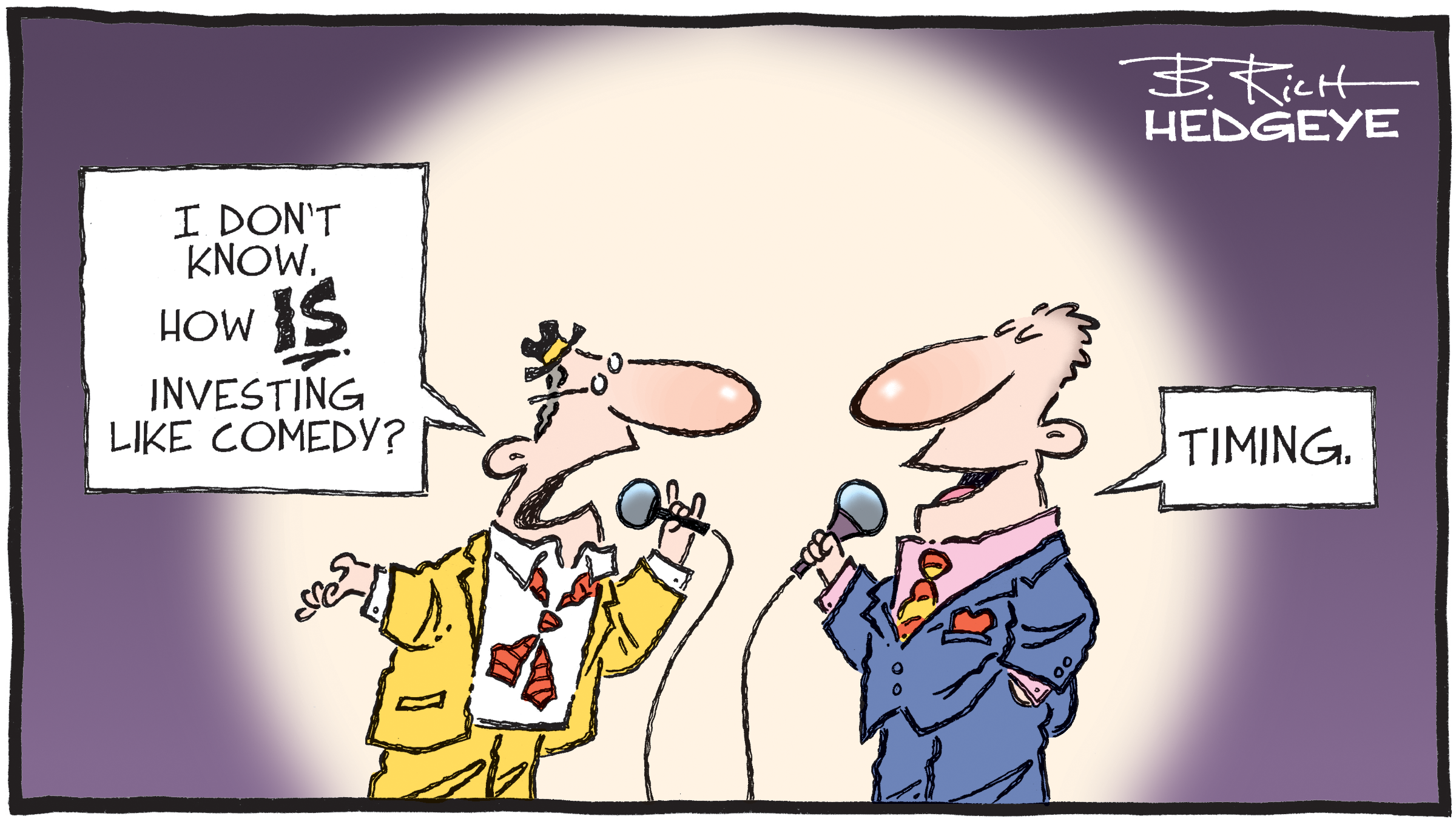 We expect Europe to head into 2022 with healthy growth momentum, with business surveys showing broad-based gains across countries and sectors, and fiscal policy set to provide persistent support to growth.

In Europe the macro backdrop remains solid and we think Europe has a great deal to offer in terms of a catch-up trade vis-a-vis other developed equity markets. It also remains attractively valued compared to the US with a central bank that is expected to remain more accommodative for longer than the Fed and other central banks (while the region also benefits from the more cyclical profile of its equity indices). We believe that the MSCI EMU Index, which reflects the European Economic and Monetary Union, has the potential to outperform the S&P 500 Index in the coming quarters.

In 2022, monetary policy normalization could offer a more favourable backdrop to European stocks. Our view is that the greatest potential continues to reside in those names that suffered the most through the pandemic, and financials. This while tech leadership may be waning – although companies within the sector should continue to benefit from a high growth rate.

Those sectors that have lagged through the recovery are more heavily represented in the European indices, which could accordingly offer more upside potential.  We believe Europe’s exposure to financials and cyclically sensitive sectors—including industrials, materials and energy—gives it the potential to outperform as economic activity picks up and yield curves steepen.

The earnings growth differential and index composition are among the factors that have largely favoured US equity markets over the past decade. In particular, US technology and growth stocks have benefited from the low interest rate environment which has allowed, among other things, an expansion of the valuation ratio, whereas European financials (which have a heavy weighting in the European indices) have suffered from the low interest backdrop.

Note also that we expect the euro to stabilise for the first part of the year, which would also be positive for the attractiveness of European equities for foreign investors. 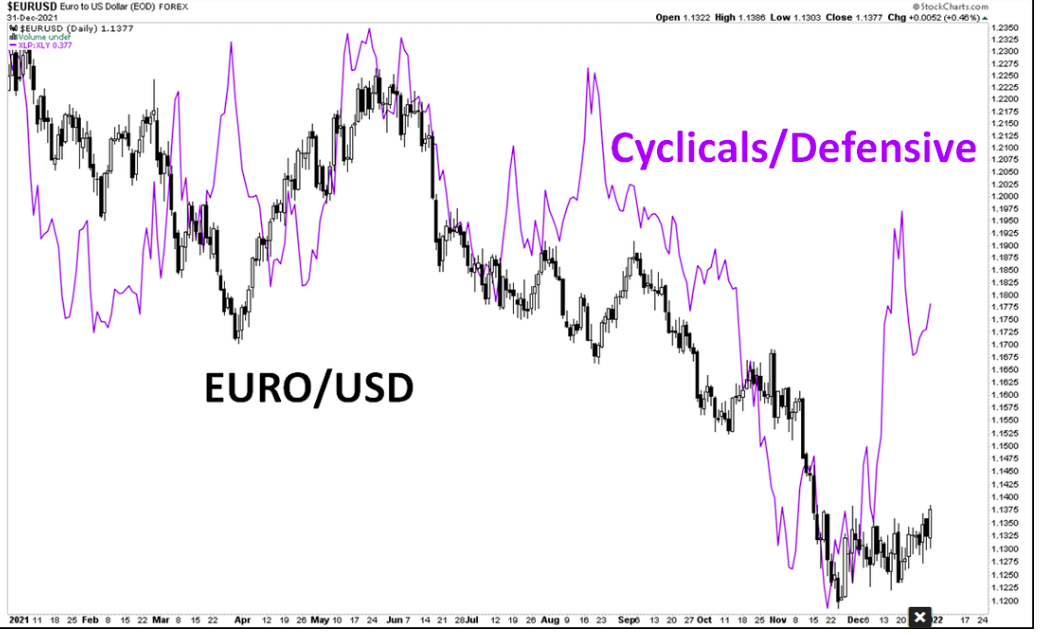 What can be the main moving characteristics for this year ?

2021 was a year of rebound and recovery, and we expect that 2022, by contrast, will be a year of moderation—particularly when it comes to growth, inflation and investment returns. inflation and the possibility of rising interest rates are perhaps two of the biggest threats to the stock market in 2022. Developed economies have spare capacity, households are sitting on accumulated savings from the pandemic lockdown and central banks are planning to remove accommodation only gradually.

Overall, the global economy appears poised for a second year of above-trend growth, but at a slower pace than in 2021. We believe global growth will be slower in 2022 than 2021, but still above trend. While inflation has yet to peak, we believe it will likely decline over the year. As a result, we expect any tightening by central banks in 2022 will be modest.

The last few months of 2021 have seen the warning of rising inflation. Undoubtedly, it has become an increasingly real, present, and noticeable threat. And that’s how most analysts see it, as they point to inflation as among the key factors for 2022.

Commodities How High Can They Go ?

To explain the strong performance of commodities in recent years, experts point to the fact that commodity baskets, although cyclical, complement other asset classes very well. As a result, the Bloomberg Commodity Index (BCOM) has risen by almost 60% since the beginning of the pandemic and by 24% since January 2021. 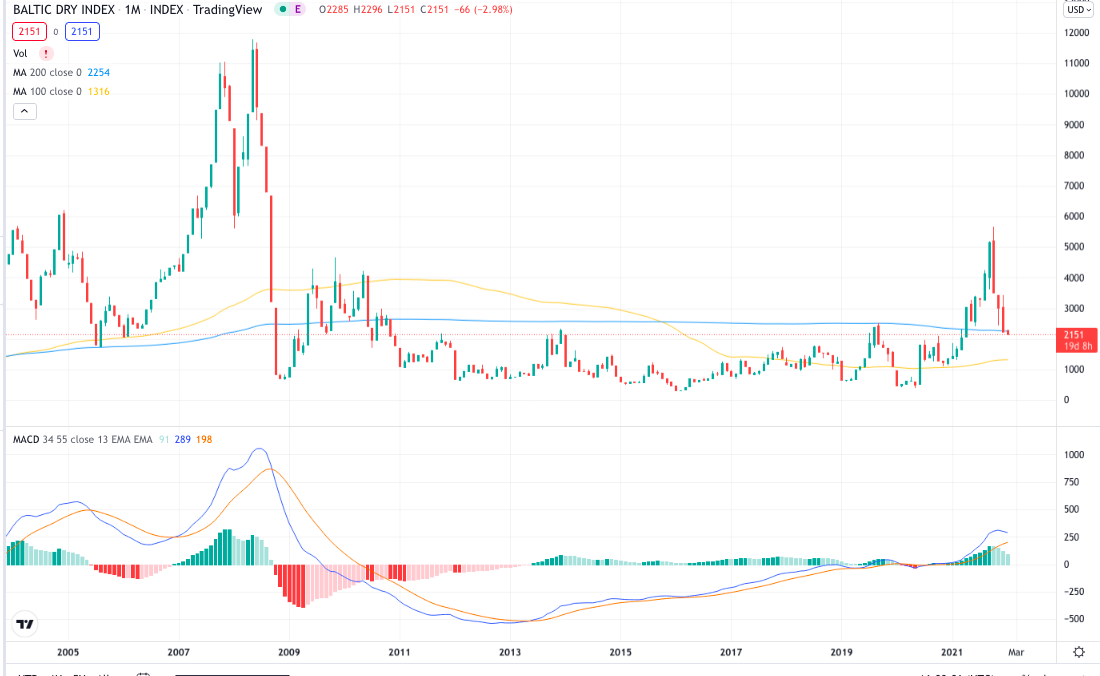 But look at the chart, as previously mentioned when an uptrend breaks and a rally fails at that previous support- technically that is bad news

Baltic Dry Drawdown
The Baltic Exchange Dry Index slumped by 5.8% to 2,027 on Wednesday, January 12 its lowest since March 16, extending losses for a fourth straight session, amid weaker seasonal demand across all vessel segments. 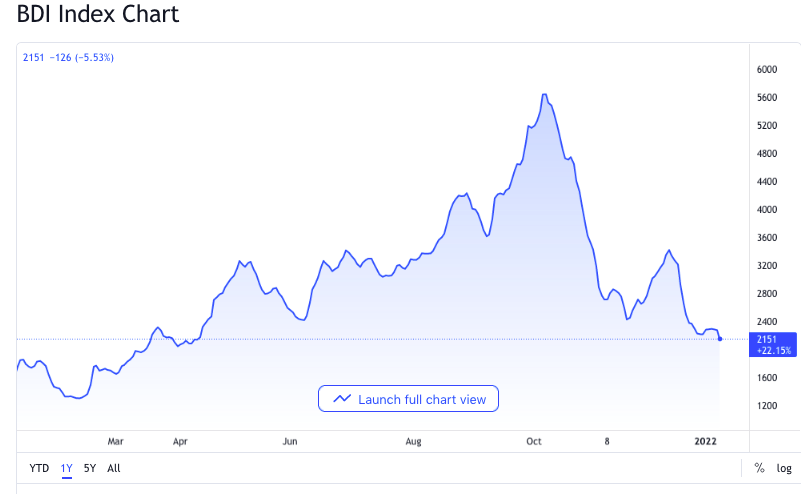 For many months the messages from the top central bankers have played the ambiguity card, although in their latest meetings they have clarified the picture considerably. In this sense, the conclusion is that the important meetings in December have not surprised the market, even though important decisions were taken. 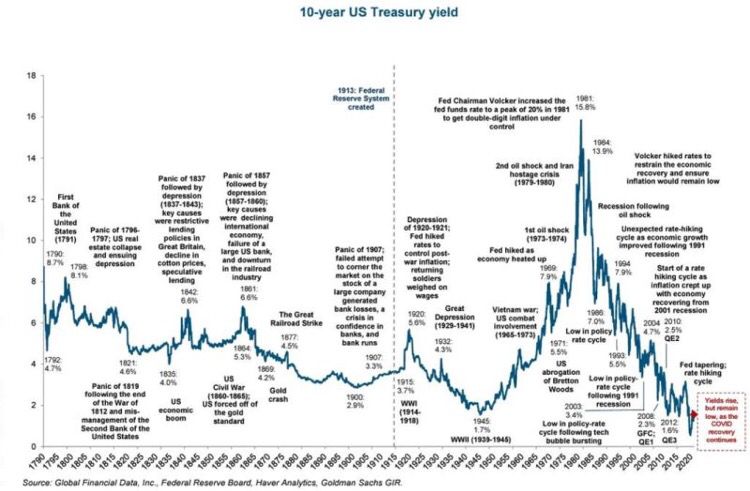 The focus of FOMCs has clearly been more restrictive or hawkish, which seems to mark the future of upcoming meetings. However not all central banks are at the same point in the cycle, with the Anglo-Saxons leading the way for the ECB from next year onwards, especially if price expectations continue to surprise on the upside.

Asset prices have inflated due to the message from the Fed that any tightening of policy will be limited and gradual. However, if the bank is forced into more extreme monetary policy action, richly supported valuations could melt away.

Volatility may still be the name of the game, but if history is any guide, the Fed’s “taper tantrum” of 2013 was followed by strong gains for equities, as traders bet the economy was healthy enough to stand on its own. Following Ben Bernanke’s comments in May 2013, stocks fell 5.8% in the next month, but for the rest of that year, the market was up 17.5%. Raising rates in 2022 could also be a “net positive” event by signaling that the central bank feels comfortable about the U.S. recovery.

It goes without saying that Covid and its new variants must be taken into account in 2022. Two years ago, the pandemic emerged, acting as the trigger for many of the factors described above. Almost 24 months later, new mutations of the virus continue to emerge to spook the markets. Even with vaccinations, this will still be a problem that does not appear to be easy to solve in the short/medium term.

If four catalysts break the right way the market could move significantly higher next year. Among them: 1) Inflation peaks, 2) Central banks don’t tighten too much, 3) Earnings remain very strong, 4) COVID ends. If all the scenarios come to fruition, the S&P could close as high as 5,775 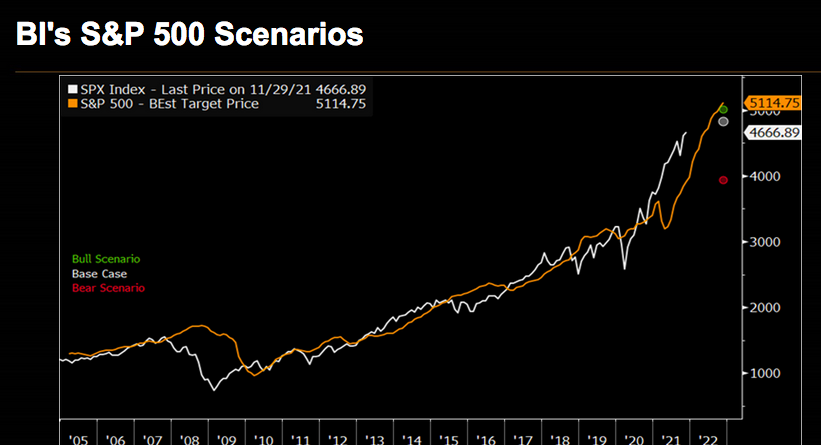 In our view, the wall of worry built on the back of high multiple stocks bodes well for equities. The strongest bull markets do climb a wall of worry, a fact that those making comparisons to the 1999 tech and telecom bubble seem to forget. No wall of worry existed or tested the equity market in 1999. This time around, the wall of worry has scaled to enormous heights.