Recession at the Horizon

We are happy to share with our faithful readers and trustful clients our  Investment Strategy for the end of 2022. 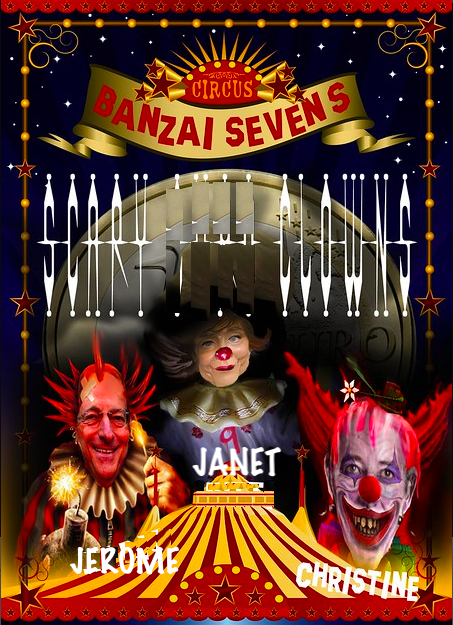 It was another tough quarter for asset markets, with returns across almost all asset categories of stocks, bonds, and commodities finishing in negative territory.

One of the major headwinds for markets was the shift toward a more aggressive pace of monetary tightening by most of the world’s central banks. In parallel governments aim to mitigate a potential slowdown through fiscal support. 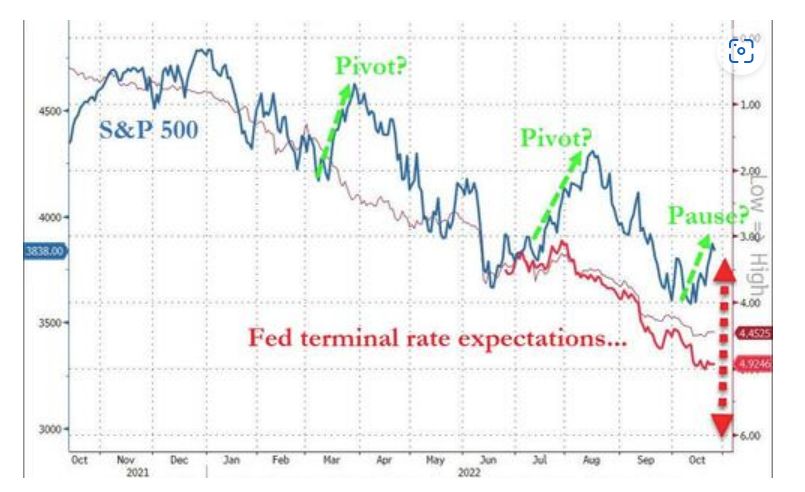 We maintain an negative stance on equities in our portfolios. We are still holding back on bonds, although prices have now reached attractive levels.  We are positive on commodities (see end) and have we remain positive on the dollar against all currencies (see below) as the greenback remains the only true inflation hedge at this stage. 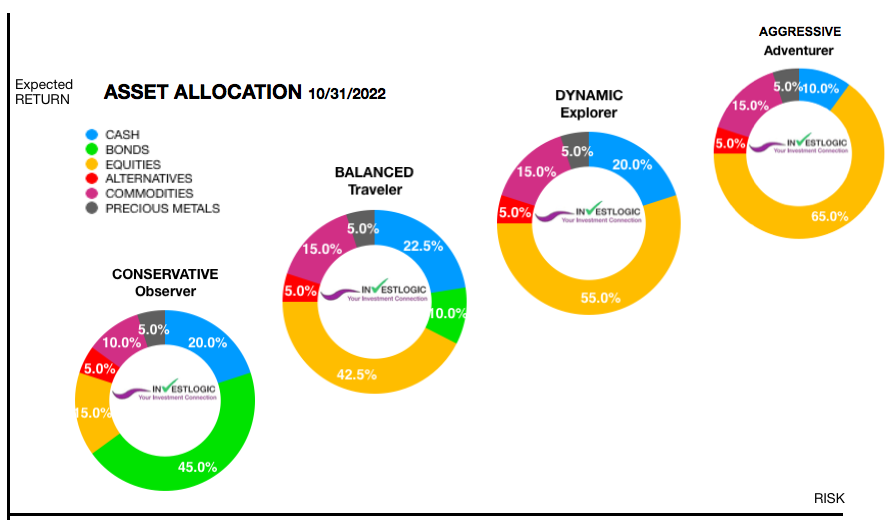 The return of inflation leads to a return of the cycle. From now on, it will be key to know how to identify the moments of inflection. This return of the cycle therefore allows a winning return of active management capable of anticipating inflections. It multiplies and diversifies opportunities. -Based on our proprietary ABS matrix to guide us to the optimum investment opportunities in the prevailing economic environment  and according to various investment approaches based on style or sensitivity-. 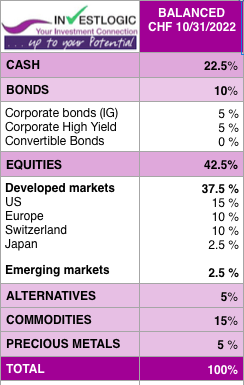 We remain tactically defensive in our investment committee. It is still important for investors to adopt a long-term perspective and not become over pessimistic.

We favor positioning in value stocks, which tend to outperform in environments of high inflation and rising policy rates. We confirm our overweight stance on Energy and Health Care and a positive exception for Financials and Staples. 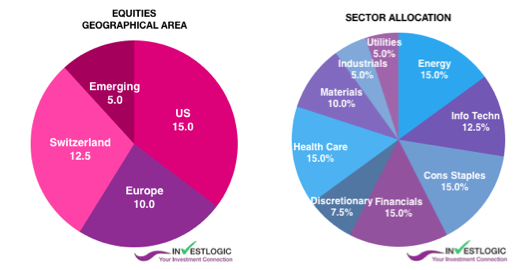 We remain patient, given the fact that core inflation, which excludes energy and fresh food prices, continues to rise in the industrial nations. At the moment, there’s still a risk of long-term interest rates rising again and bond prices falling accordingly.

We maintain that investors no longer have the luxury of being passive and inattentive, which was possible during the previous era of steadily declining interest rates and a benign geopolitical scene. Interpreting these dominating macro developments and translating our analysis into a coherent investment strategy is our mission. 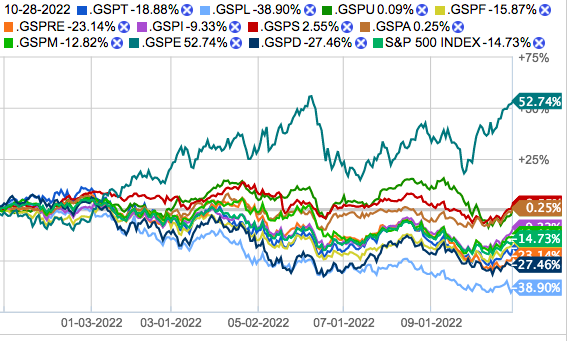 Have We Hit Rock Bottom Yet?

The developed economies are in the fringe of the recession cycle phase although strong employment markets continue to provide support to the US consumer.

Consumer inflation rates moderated during the quarter and have fallen modestly from their four-decade high of about 9% in June. But we anticipate that inflation will have a difficult time returning to a low level any time soon. In part, due to high inflation , and monetary tightening, the US 10-year Treasury Bond yields reached their highest level since 2009, which provides a mixed picture for investors. 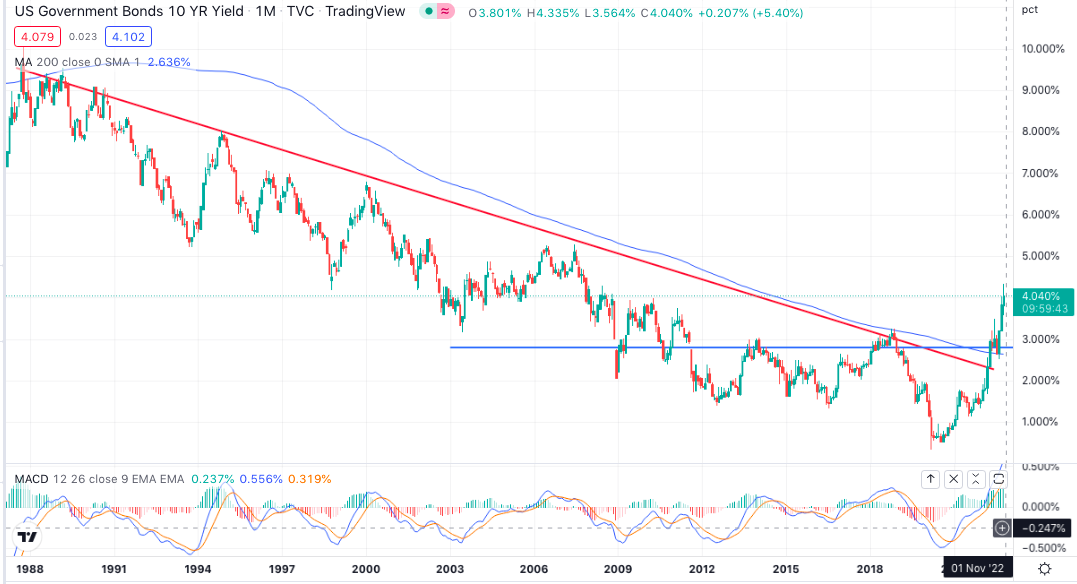 The outlook for the stock markets remains challenging as there are no signs as yet of the economic environment improving – quite the opposite, in fact.

Last month’s major downturn has tipped momentum on the stock markets back into negative territory. As well as the European markets, the east Asian countries, including South Korea and Taiwan, were also badly hit. While Europe is anxious about the energy shortage this winter, the east Asian countries are now feeling the impact of the recession in China.

Market expectations remain positive for corporate profits. But earnings growth is slowing. And estimates for 2023 profit growth have been revised lower this year.

Well, here we are in the midst of Q3 earnings season with early results definitely on the weaker side. We will dig into the stats to understand what it tells us about the market outlook and why we remain decidedly bearish.

Presently, we are having another bear market rally as stocks have bounced nearly 8% from the recent lows. Any observer of past bear markets will see that each had several meaty bounces before the next leg lower. Meaning there is no real reason to give this bounce any merit as the beginning of the next bull market. That is because investors cannot accurately call bottom yet as we are still in the midst of things getting worse. 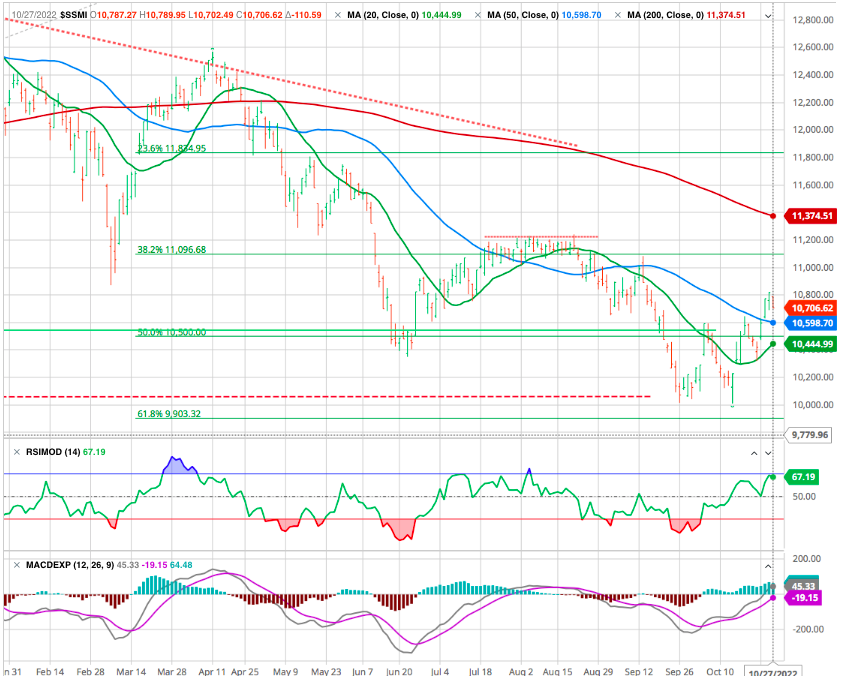 Overall, caution remains the order of the day, due to the risk of a collision between dissonant fiscal and monetary policies, as well as to the still overly optimistic outlook for earnings growth per share. Disappointments are almost inevitable and are likely to interrupt short-term market rallies.

Investors still generally see gold as a means of protecting against crises and inflation. The precious metal is only performing this role to some extent this year – at least from the perspective of US and Swiss investors. 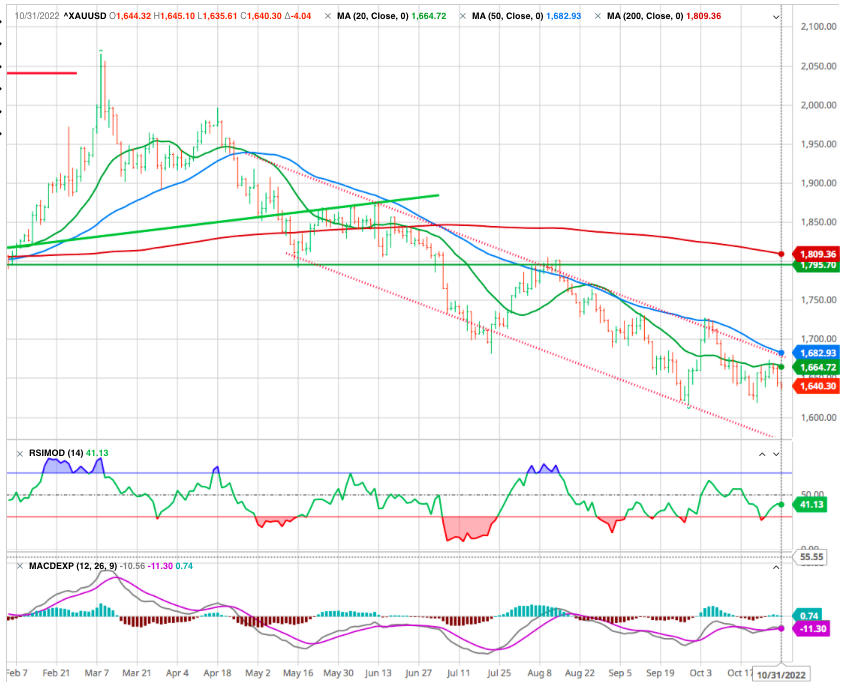 The gold price plummeted by 100 US dollars to 1,620 US dollars within a few days in September, hitting a new low for the year. Despite a phase of recovery, the precious metal is still hovering around the 1,650 dollar mark. The recent strength of the US dollar has also had a major impact on price performance.

The US dollar and Swiss franc remain strong. However, Asian countries are going through a phase of weakness, while the commodity currencies have also performed disappointingly recently.

The currency landscape changed dramatically over the past year, becoming much more one-sided. The US dollar and Swiss franc reaffirmed their strong position again last month, clearly benefiting from their reputation as crisis-proof currencies. In contrast, the pound sterling and the Swedish krona suffered considerable losses.

Only the EUR/USD reacted positively after the ECB 0.75% rate hike. 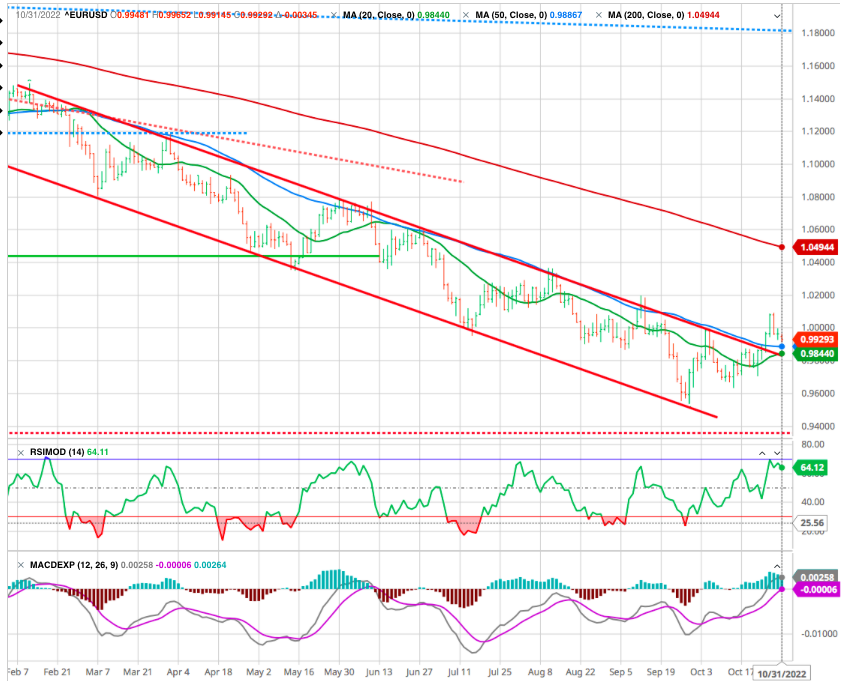 The Japanese yen bucked the trend, and did not suffer any further price losses last month. For the first time in 20 years, the Japanese central bank was forced to intervene in the currency markets to protect the value of the yen from slipping further.

It’s been a wild year for commodities like oil, gold, copper, lumber, and wheat. Back in February, the opening salvo of the war in Ukraine sent commodity markets into turmoil. Commodity prices skyrocketed, with some hitting all-time highs.

Commodity prices had already been on the rise before Russia invaded Ukraine, as global supply disruptions and COVID broadly impacted markets. The chart below of the S&P Goldman Sachs Commodity Index vs the Dow Jones Index, 8courtesy of TheFelderReport) which reflects the price of more than 24 commodities, shows how wild a ride it has been for commodity prices thus far this year 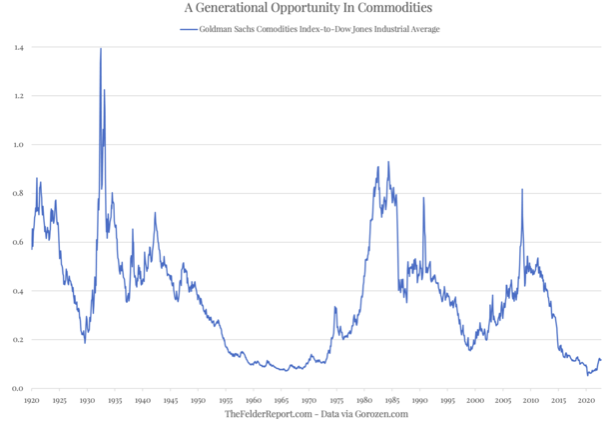 As a result, many investors have come to the conclusion that they have missed the trade. The truth, however, is that the bull run in commodities is probably still only in its early innings.

From a fundamental standpoint, commodities are still dramatically undervalued relative to equities. This suggests that the outperformance they have seen over the past two years still has plenty of room to run. There is also the crucial fact that capital flows in recent years represent a tremendous tailwind to the rise in this ratio which, due to the long lag time associated with these trends, will persist for years to come.

Should commodities have a role in your portfolio?

It may depend on your inflation expectations.

As we are concerned that future inflation could be worse than expected we could consider establishing an allocation to commodities for some protection. 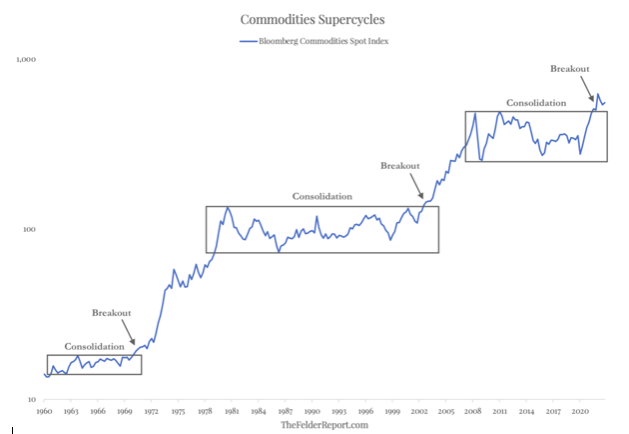 So while most investors continue to shun the asset class in favor of financial assets due to hindsight bias created by the long consolidation period over the past decade or the misperception that commodities are now somehow overvalued after their stellar performance over the past two years, the fundamentals and technicals continue to tell an increasingly bullish story. Active (rational) investors shouldn’t have to strain to hear it as they evaluate their objectives and risk tolerance before establishing an allocation to the asset class.

But be aware that compared with traditional asset classes, commodities’ performance has been highly volatile, and has often lagged over longer periods.

We believe that a diversified mix of US and international stocks, bonds, and short-term investments can lead to long-term growth in a risk-managed way.

We believe commodities can be helpful at times. But we tend to think of that as an opportunitic position we take on occasion. as opposed to a foundational position that we always have in a portfolio.

Don’t Be an Irrational Investor

It is not uncommon to see big rallies like we saw the last week of October or in July-August. But like we also saw, those rallies can be very short-lived. There are some things we can control and some things we can’t. But remaining mechanical in our approach to markets can alleviate some anxiety and keep us from making emotional (a nice way of saying, irrational) decisions.

For longer term investors looking to take new or add to existing positions, there will be opportunities on  the downside. For shorter term traders, a highly volatile market is full of opportunity, and risks.

But most importantly, try avoiding allowing your emotions to dictate your investments, especially in a market that moves around like this one.

We find ourselves using the term “irrational” rather frequently in these weekly investment comments, which is a reflection of the times in which we live.

We have entered an era in which some of the preconceptions of investors developed over the past few decades will no longer hold true. As investors, we will have to stay alert to change and adapt according. We believe the insights will prove valuable to our subscribers. 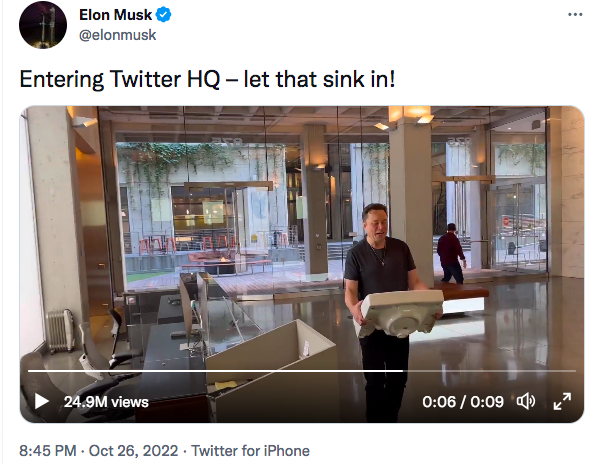