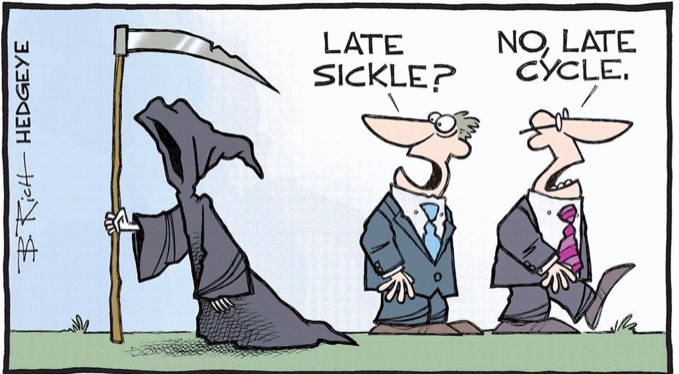 The November Manufacturing PMI registered 49 percent, 1.2 percentage points lower than the 50.2 percent recorded in October. Regarding the overall economy, this figure indicates expansion for the 30th month in a row after contraction in April and May 2020. The Manufacturing PMI figure is the lowest since May 2020, when it registered 43.5 percent.

The ISM manufacturing data was weaker than expected, suggesting the US economy is inching closer to recession. The ISM report noted that the reading of 49 indicated that the REAL GDP growth in the fourth quarter was around 0.1%.

The move in the ISM report indicates that S&P 500 earnings growth could turn lower in 2023 and perhaps go negative. The relationship between the ISM manufacturing survey goes back a long time, and they, too, tend to track each other very well.

Thus, hard to appreciate why right now would be different with the economy on the verge of recession. 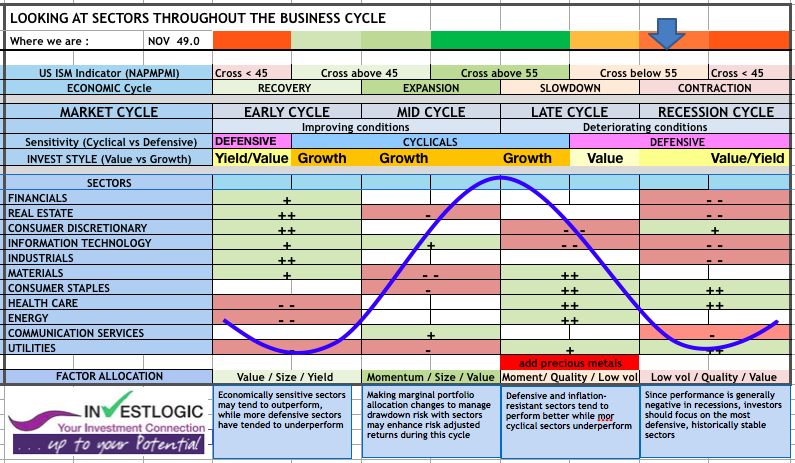 Note: The typical business cycle shown above is a hypothetical illustration. There is not always a chronological progression in this order, and in past cycles the economy has skipped a phase or retraced an earlier one. Source for sector performance during business cycle: Fidelity Investments (AART).  Past performance is no guarantee of future results.

Over the intermediate term, asset performance is often driven largely by cyclical factors tied to the state of the economy, such as corporate earnings, interest rates, and inflation.

The business cycle, which encompasses the cyclical fluctuations in an economy over many months or a few years, can therefore be a critical determinant of equity market returns and the performance of equity sectors. 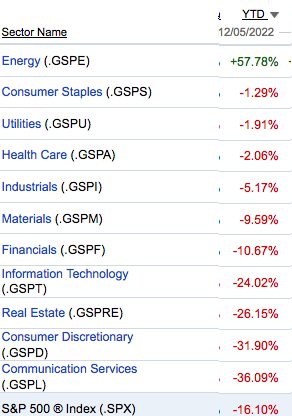 The fundamental investor in us still strongly foresees a recession and deepening bear market evolving in early 2023. At this junction we therefore would prefer to stay defensive favoring Staples, Health Care, Utilities with some exception in Energy for geopolitical reasons. 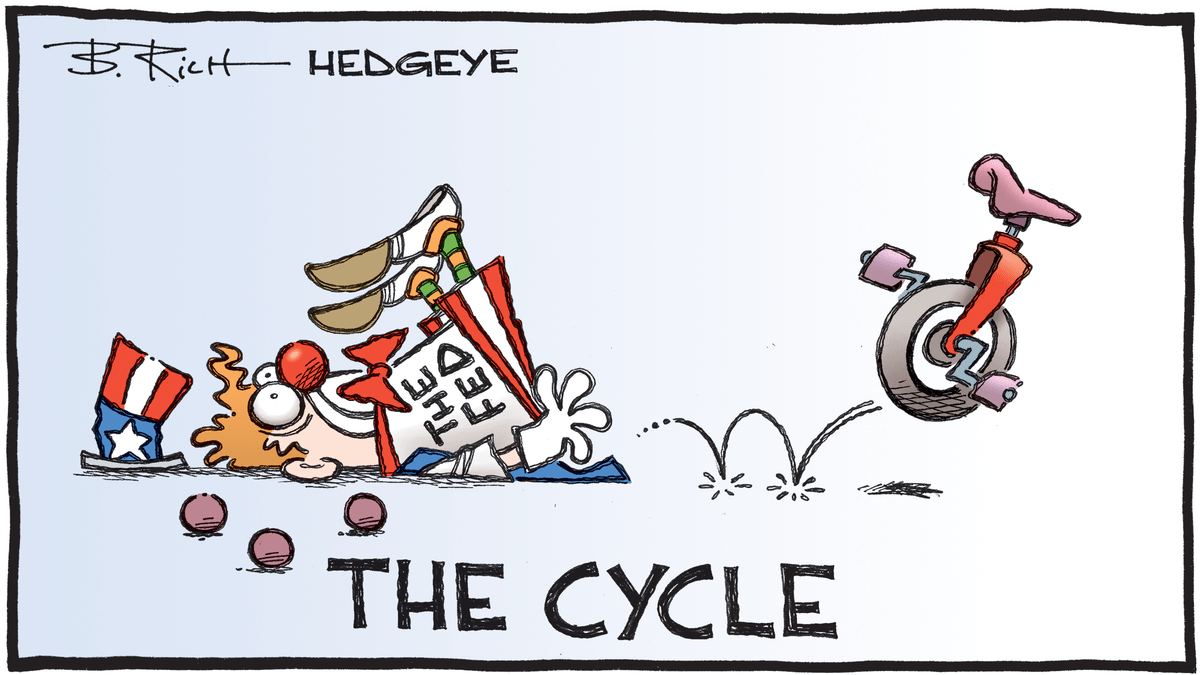 Two of the best mainstream market indicators of economic bearishness are :

(if shorter-term yields are higher than longer-term ones, that implies a belief that the economy is due a fall).

The yield curve,is an emphatic signal of an approaching recession. Early easing would do nothing to change that implicit prediction.

Spread between 3-month and 3m/10-year U.S. Treasury yields hovering near its lowest (most negative) since early 2007 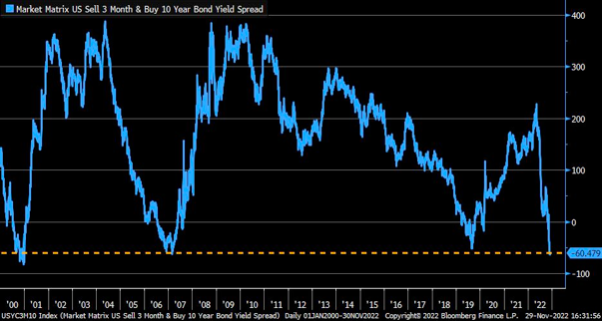 Discretionary Stocks to Be Clobbered Along with U.S. Economy

The more the Fed raises interest rates, the more likely the economy will fall into a definitive recession following the year’s first two quarters’ technical recession.

As the sector’s name implies, demand for these companies’ goods and services is at the consumers’ discretion. Therefore, when times get tough, consumers cut back on these nonessential spending so that they have enough money for what they can’t do without, listed on Consumer Staples (XLP). 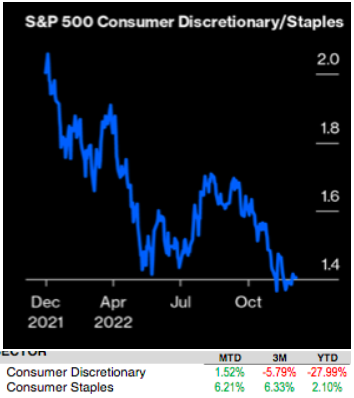 On these simple measures, a recession looks ever more likely, and nothing much has changed in the last three weeks.

As strategists publish their predictions for the US economy next year, it’s clear that recession-positioning is regarded as more of a when than an if. Perhaps consumers should take their cues from Wall Street and gear up for one as well.

The business cycle describes how the economy expands and contracts over time. It is an upward and downward movement of the gross domestic product along with its long-term growth rate.

The business cycle consists of 6 phases/stages: 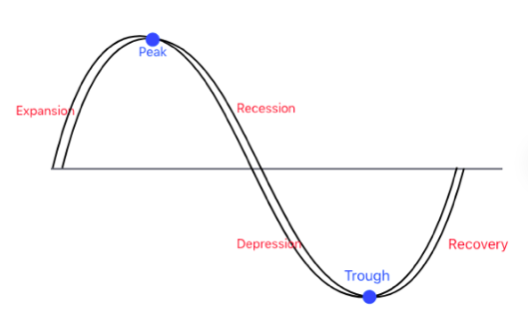 Expansion is the first stage of the business cycle. The economy moves slowly upward, and the cycle begins.
The government strengthens the economy:

– When the growth slows, the central bank reduces rates to encourage businesses to borrow .

– As the economy expands, economic indicators are likely to show positive signals, such as employment, income, wages, profits, demand, and supply.

– A rise in employment increases consumer confidence increasing activity in the housing markets, and growth turns positive. A high level of demand and insufficient supply lead to an increase in the price of production. Investors take a loan with high rates to fill the demand pressure. This process continues until the economy becomes favorable for expansion.

– The second stage of the business cycle is the peak which shows the maximum growth of the economy. Identifying the end point of an expansion is the most complex task because it can last for several years.

– This phase shows a reduction in unemployment rates. The market continues its positive outlook. During expansion, the central bank looks for signs of building price pressures, and increased rates can contribute to this peak. The central bank also tries to protect the economy against inflation in this stage.

– Since employment rates, income, wages, profits, demand & supply are already high, there is no further increase.

– The investor will produce more and more to fill the demand pressure. Thus, the investment and product will become expensive. At this time point, the investor will not get a return due to inflation . Prices are way higher for buyers to buy. From this situation, a recession takes place. The economy reverses from this stage.

– The recession is followed by a peak phase. In this phase economic indicators start melting down. The demand for the goods decreased due to expensive prices. Supply will keep increasing, and on the other hand, demand will begin to decline. That causes an “excess of supply” and will lead to falling in prices.

– Consumers don’t borrow or spend because they are pessimistic about the economic outlook. As the central bank cuts interest rates, loans become cheap, but businesses fail to take advantage of loans because they can’t see a clear picture of when demand will start picking up. There will be less demand for loans. The business ends up sitting on inventories & pare back production, which they already produced.

– Companies lay off more and more employees, and the unemployment rate soars and confidence flatters.

Safe heaven/Defensive Stocks – It maintains or anticipates its values over the crisis, then does well. We can even expect good returns in these asset classes. Ex. utilities, health care, consumer staples, etc.

5) Trough:
– When economic growth becomes negative, the outlook looks hopeless. Further decline in demand and supply of goods and services will lead to more fall in prices.

– It shows the maximum negative situation as the economy reached its lowest point. All economic indicators will be worse. Ex. The highest rate of unemployment, and No demand for goods and services(lowest), etc. After the completion, good time starts with the recovery phase.

– As a result of low prices, the economy begins to rebound from a negative growth rate, and demand and production are both starting to increase.

– Companies stop shedding employees and start finding to meet the current level of demand. As a result, they are compelled to hire. As the months pass, the economy is once in expansion.

– The business cycle is important because investors attempt to concentrate their investments on those that are expected to do well at a certain time of the cycle.

– Government and the central bank also take action to establish a healthy economy. The government will increase expenditure and also take steps to increase production.

After the recovery phases, the economy again enters the expansion phase.