WEEKLY MARKET REVIEW AS OF MAY 18

This  Kamikaze rally is the rise in the stock market you get from currency depreciation/debasement. This kind of victory-through-weakness is every bit as destructive, in the end, as the kamikaze attacks. The ‘victory’ is the rise in stock prices and the temporary boost in exports from countries that debase first and fastest. 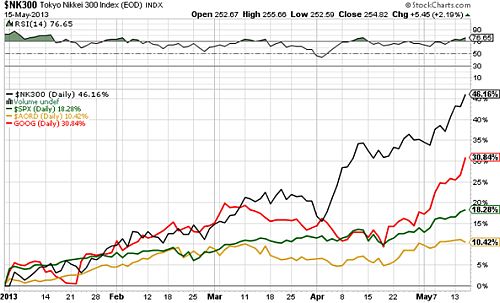 One intended consequence when the central bank steps into to be the main buyer in a market is rising stock prices. But not just in Japan. Can you really make people wealthier by making them feel wealthier? Well, Japan is having a red hot go at the idea. The chart above shows Japanese stocks going into high gear since April, when the Bank of Japan declared war on the Yen. The S&P’s gain is modest by comparison.

Equities: Equities were higher once again, although Canada and Australia lagged reflecting generally lower commodities.  The stock market has rallied sharply in direct correlation to the expansion of the Fed’s balance sheet yet economic growth has floundered much to the dismay of the Federal Reserve. As stated recently “The increases in excess reserves, which the banks can borrow for effectively zero, have been funneled directly into risky assets in order to create returns. This is why there is such a high correlation, roughly 85%, between the increase in the Fed’s balance sheet and the return of the stock market.”

Currencies: USD remains broadly bid. JPY topped 103 for the first time since October 2008. AUD dropped below parity for its first time in nearly a year.

When fixed income, which is the world’s largest asset class, is yielding almost nothing, it has a significant impact on other asset classes since money goes in search of returns elsewhere. In fact, central banks are also now buying equities for this very reason. All of this is why we continue to hold gold but have also increased our exposure to stocks (particularly dividend paying blue chips; in order to make hay while the sun shines.

The S&P 500 is in uncharted territory, and the only resistance is the top of the rising trend channel, at which point we would expect a consolidation or correction toward the point of breakout to begin. The long-term breakout implies that prices are going to go higher, and the parabolic nature of the advance implies that it is likely to accelerate.

Money managers (particularly macro managers), that have been sitting in cash watching the market’s rise in disbelief have been seriously underperforming their benchmarks. As a result they are under considerable pressure to produce returns, and have therefore been deploying funds at the first sign of a pullback. It is this desire not to get left behind that has kept recent corrections so muted. Those entering the market at this stage should do so with caution and preferably with the safety and security that’s provided by a trailing stop loss.

The Canary in the Coal Mine

Central to the BoJ’s enhanced quantitative easing announced last month are massive purchases of JGBs at levels sufficient to increase the amount on its balance sheet by ¥50 trillion per year—an expansion amounting to roughly 10% of GDP. Thus, it was perhaps not surprising that JGBs rallied strongly in anticipation of this well telegraphed move—10-year yields fell from as high as 0.82% in January to as low as 0.44% just after the April 4 BoJ announcement. What is more surprising is the complete reversal of this rally. Although yields did back up some during April, most of the move occurred in just three trading days in the past week―10-year yields jumped from 0.59% on May 9 to as high as 0.85% on May 14. 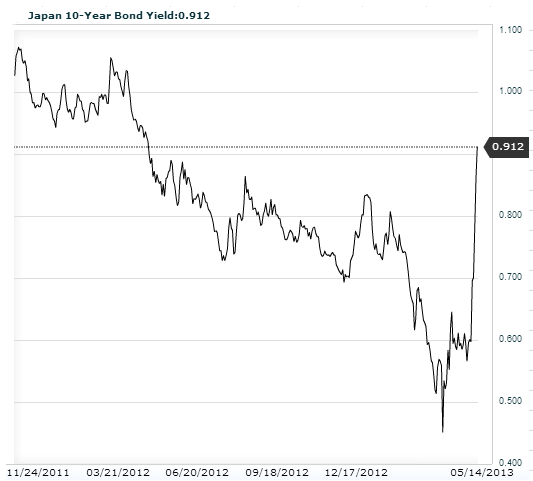 So, what’s behind this jarring surge in yields, which occurred even as the BoJ began to roll-out its aggressive purchase program? (SEE  BANZAI ! ). See also last Weekly Market Review as of May 10

The move out of JGBs seems to have sparked a major shift in global capital flows. This has been great for US-dollar denominated assets. It hasn’t been great for other economies in the region.

And it doesn’t seem to be getting any better. See our blog The Good, the Bad and the Ugly

While stocks are taking rising yields in stride, a sharp, sustained rise in U.S. yields would be good for equities, either. So in the end, it could be the stronger dollar that serves the canary function for U.S. equities, though that at this stage it’s not clear what it will take to break the stock rally.

There has been some speculation that this severe JGB sell-off could be the proverbial “canary in the coal mine.”  In other words, perhaps the BoJs aggressiveness has actually eroded investor confidence, and could be unintentionally fomenting a breakdown in market stability. However, it’s not at all clear that there is a widespread erosion of confidence in Japanese markets. After all Japanese equities continue to rally impressively.

There have also been technical considerations contributing to the severity of the JGBs’ move. The initial rally after the BoJ announcement was likely overdone, leaving JGBs due for a correction. Indeed, at the lowest yields, Japanese real money buyers disappeared making the market vulnerable to hedge funds that have been waiting years to attack such an overbought market.

The move broke back above a trendline which had been a previous floor but there remains  2 year overhead resistance in the next few points and a five year trendline comes in around 1%. If the point of BoJ QE is to raise inflation expectations then bonds by definition should also rise but we’d expect the BoJ to see this as unhelpful and enter the market sometime soon to drive down yields or at least cap them under 1%. 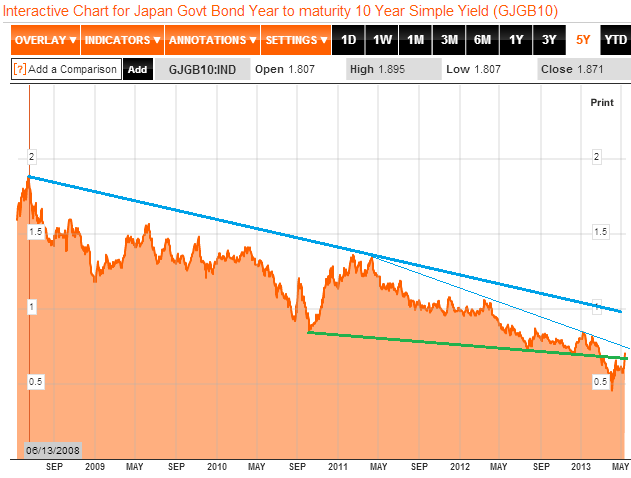 JGB Futures avoid a third halt in three days by 1 tick (drop 0.99 vs 1.00 handle limit) but two words spring to mind – not orderly. Both times JGBs approached the -1.00 level, a miraculous JPY selling pressure appeared (stealing the devaluation/inflationary thunder) and the bonds rallied modestly off their lows… 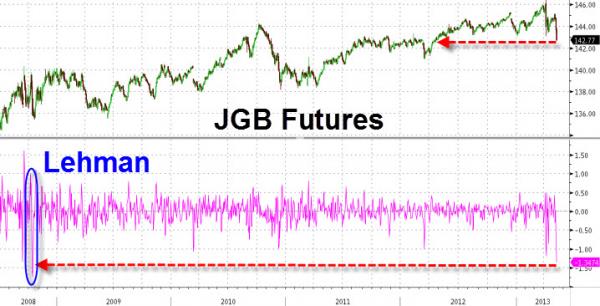