WEEKLY MARKET REVIEW AS OF MAY 10

It is also quite clear that tightening doesn’t appear likely to begin any time soon in the major advanced economies. Indeed, most major central banks are still in easing mode. (see below “When will interest rates head up”)

In Europe, the ECB cut rates again last week, and is open to further cuts. Indeed, it hasn’t ruled out experimenting with a negative deposit rate. And while the BoE has not change its primary policy levers in a while, it is still providing policy accommodation by extending its targeted credit support programs until at least 2015.

The RBA has also resumed its easing cycle this week, cutting its policy rate to a record low. And it appears poised to cut further.

And in North America, while the BoC also hasn’t moved its policy rate in a while, last month it eased its policy stance by signaling that it is moving out any rate hikes to late 2014 at the earliest. Similarly, the Fed continues to flash signals that the current near zero funds rates aren’t likely to be raised this year or next. Moreover, last week the policy statement made clear that the Fed hasn’t even ruled out the possibility that it could increase bond purchases from the current $85 billion per month pace launched in December.

So the monetary policy environment will continue to provide an extraordinary amount of support for markets and the economy for quite a while yet. And there appears to be plenty of time for investors to plan and position for what is the inevitable tightening phase of the cycle.

The most aggressive recently has been the BoJ, which announced plans just last month to double its monetary base by the end of 2014 with the goal of finally breaking the back of deflation. Among other components, the plan includes purchasing JGBs in sufficient quantity to expand the BoJ’s balance sheet by ¥50 trillion, or roughly 10% of GDP, per year. (See Below)

Equities: Easing monetary policy continues to support risk appetites and in turn equities.The worldwide rally remains on a roll. All eight indexes on my watchlist posted substantial gains with Japan topping the list with a stunning 6.67% advance in holiday-shortened four days of trading. In fact the East dominated the action, with the four Asia Pacific indexes taking the top four spots. Even the worst performing CAC 40 posted a tad over one percent. Most notably, the Nikkei remains on an astonishing rally, having now risen more than 60% since last fall (although admittedly this rise is closer to 30% in USD terms, taking into account the depreciation in JPY) – See below  Abenomics to levitate the Land of the Rising Sun –

The Shanghai remains the only index on the watch list in bear territory — the traditional designation for a 20% decline from an interim high. The index is down over 35% from its interim high of August 2009.

Currencies: USD was broadly bid after the good jobless claims print. AUD flirted with parity in the wake of the RBA cut. JPY finally broke through 100 to its weakest since October 2008.

Commodities: The USD bid is weighing on commodities, sending both oil and gold lower on the week. 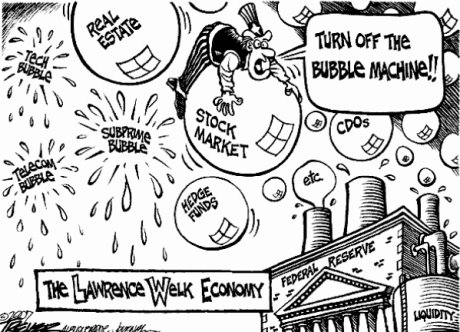 With U.S. stocks hitting all-time highs and bond yields under pressure, bubble talk is rampant. But you shouldn’t pay any attention to it, according to Princeton economics professor and New York Times columnist Paul Krugman.

The Fed is keeping yields artificially low and shows no signs of changing course.

The Federal Reserve, under chairman Ben Bernanke, is holding rates down two ways. It is keeping short-term rates near zero by targeting the federal funds rate, the rate at which banks lend money to one another overnight. And it is holding down long-term rates through monthly purchases of $85 billion worth of Treasuries and mortgage-backed securities. The Fed’s actions have driven investors to look further afield for income, which has in turn pushed down rates on everything from junk bonds to municipal bonds.

The consensus is that massive global QE will end in tears, but the final act may take quite some time to arrive in the US. Today, many central bankers are looking at the currency wars of the 1930s, and the lessons they are drawing from the Great Depression are clear. In a speech to the Economic Club of New York in early 2013, Fed Chairman Bernanke boasted, “In fact, the simultaneous use by several countries of accommodative policy can be mutually reinforcing to the benefit of all.” Bernanke argued that rather than call unconventional policies and devaluations “beggar-thy-neighbor” policies, they should be called “enrich-thy-neighbor” policies. That’s taking the lessons from the 1930s a step too far, but when it comes to unconventional policies and devaluations, Chairman Bernanke believes the more the merrier.  And so do his fellow central bankers, apparently.

The exit strategy will be: QE first, rates later.

And although Bernanke has said the Fed will stop its long-term bond purchases before it raises short-term rates (which could cause long-term yields to rise even as short-term rates stay put), the end of its bond-buying spree could still be years away. In a late-March press conference, Bernanke provided a road map on what needs to happen before the Fed trims its monthly bond purchases. The central bank will adjust in a “sensitive way” based on several measures, including payrolls, wages, and unemployment claims. He noted that the Fed’s bond purchases seem to be helping the economy and have done so without creating any major risks so far. Moreover, the Fed has signaled that it will vary or taper its purchases before it ends them outright. All of this suggests that the Fed isn’t seriously considering allowing long-term rates to rise yet, and that any rise may be slow in coming.

As Blankfein  said  on May 2 the Fed’s actions are “sensible” given the potential effects of deflation. While the risk of inflation in the longer term is more likely than deflation, deflation can be more devastating to the economy, he said. “I’d be most afraid of the economy sliding back into a deflationary period. “Psychologically we are in a bit of a deflationary mindset,” as companies and investors hoard cash. Everything You Think You Know About the Fed’s Exit Plan May Be Wrong

Opposite is Buffet warning that inflation is likely when the Fed stops its $85 billion a month bond-buying program.

Nevertheless we want to emphasize that for four years, markets  have accepted  yields at the lowest, which has nothing to do with the incurred real risk. Under normal circumstances, a lower risked investment offers you a minimum yield. But while Sovereign nations  have never been much indebted, while this debt will never be paid off, the bond yields are there lowest. Thus the control of the yields might escape the central banks when the investors will become aware that the sovereign bonds are not so safe investments.

Abenomics to levitate the Land of the Rising Sun

Speaking of the sun, I hope the future doesn’t trigger an allusion to a Japanese version of the myth of Icarus.

It appears things are getting a little out of control around the world. Between the collapse in JGB implied volatilities in recent days, today’s melt-down in JPY (+255 pips from pre-open US levels), the last few days melt-up in the Nikkei (+6.8% in 3 days), and now the quadrillion Yen Japanese government bond market is halted limit down as yields smash higher by 11bps to 70bps in 10Y – the highest yield since mid-February. Japan’s economy watchers see the current economic climate dropping for the first time in six months (and household expectations also fell for the first time in six months).

We are glad to share Keith Fitz-Gerald, Chief Investment Strategist for Money Morning   report on “Abenomics,” the radical, not to say outlandish, fiscal moves that the newly installed government of Japan is making. And Keith has a ringside seat: he spends much of each year in Japan. HERE

Japan should serve as a lesson to central planners around the world.

Japan’s stock market/ real estate bubble burst in the early ‘90s. Since that time Japan has launched NINE QE efforts equal to roughly 25% of its GDP. And GDP growth has worsened despite these efforts from 2% to 1%. Ditto for employment. 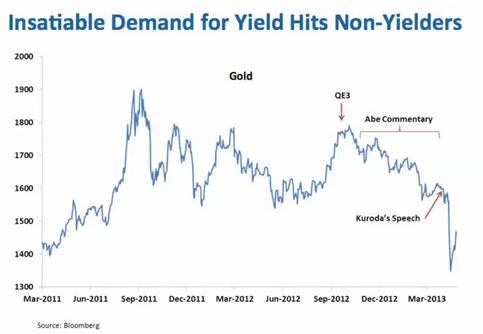 Japan elected a new Prime Minister Shinzo Abe in September 2012. Since that time, his primary belief has been that Japan hasn’t engaged in enough stimulus. He threatened the Bank of Japan to get working… and it did, announcing a $1.4 trillion stimulus last month. This has created an insatiable demand for yield around the globe as rates on European periphery debt has been pushed down. The flip-side is that non yielding instruments such as gold have been punished in the short term. The recent precipitous drop in the price of gold occurred almost immediately after the BOJ announcement.

Since that time, the Yen has positively imploded. It broke below 100 yesterday for the first time in years. It’s now fast approaching the long-term trend line. When we take this out, it’s GAME OVER for the great monetary experiment of Japan.
Japan has a Debt to GDP of over 200%. Japan’s demographics are terrible (the country sells more adult diapers than child diapers). Its economy has been imploding for 20 years, and now its truly epic bond bubble is on the verge of collapse as well.

In the longer term, the real question is, what happens when a weak Yen is no longer viewed as a positive? Although 90% of the Japanese debt is held within the country, it will not remain a domestic issue. According to Hughes, when the bonds are perceived to be at risk, the money will flee. Currently Japan has a debt to GDP of 245% and the interest rate clock is ticking. Tax revenues have fallen for the last twenty years and the total amount of interest due is accelerating even in the face of falling rates. In the long term Hughes likes gold as nothing has changed regarding the ultimate fate of Japan, they have only brought forward their day of reckoning.

If you thought Greece was bad for the financial system, wait until you see what Japan will do to it.

Since mid of last week, price has fallen from the high $1470s to the $1,420s. These are levels we haven’t seen since April 25.That’s when gold began trading in a nice, orderly horizontal channel. 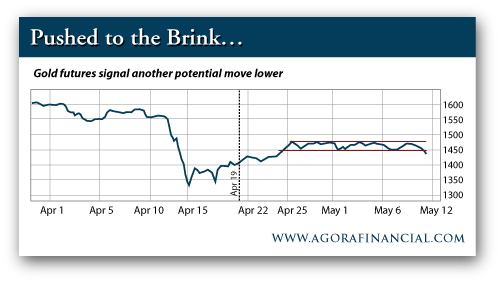 End of the week, it broke through its price floor on strong volume. Not a good sign if you’re a gold bull… Here are two important takeaways from all of this:

At this point, too many investors are convinced gold can move higher from here. You’ll want to buy when everyone agrees that gold is cooked.

On the other hand, not everyone buying gold because of future inflation is on board. Our reason to buy gold has always been motivated by what we believe is too much debt in the developed world. While Eurozone members are trying to address their debt loads through austerity with rather mixed results, we believe the U.S., U.K. and Japan are more likely to resort to their respective printing presses. In that environment, we believe gold should perform rather well over the coming years.

To paraphrase the great technician Walter Deemer:  When it’s time to buy, you won’t want to… 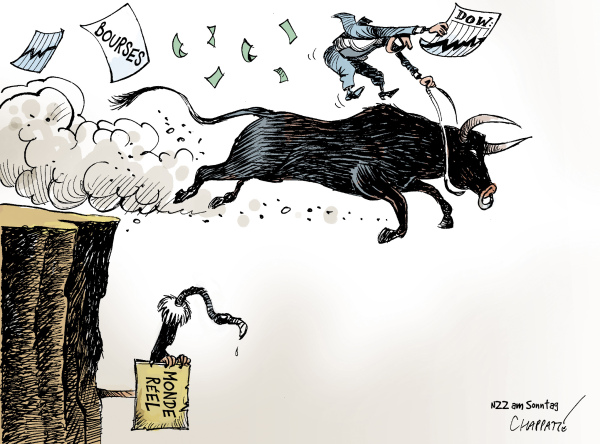