ISM : The Canary in the Coal Mine 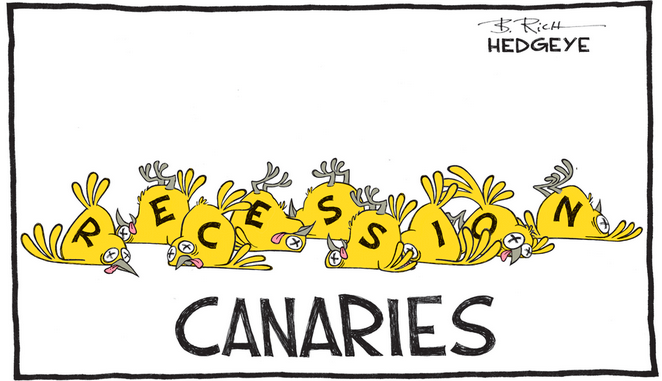 The first half of 2022 has reminded investors, both professionals and do-it-yourselfers alike, that the predictable cycles of economic and business activity aren’t the only things that can push financial markets up and down.

As the sun rose on January 1, the future looked bright. Corporate earnings were strong, the economy was growing, stocks were near record highs, the COVID threat was shrinking, and the Federal Reserve was planning only a gradual rise in interest rates.

But at mid-year that hopeful dawn has given way to a bear market in stocks, the biggest-ever drop in bond prices, the highest inflation in decades, the sharpest rise in interest rates in years, and the most destructive conflict in Europe since World War II.

More and more it looks like recession is here. This includes a dramatic decline for ISM Manufacturing discovered early this month. The June ISM Manufacturing Index was the lowest in 2 years. The latest headline Purchasing Managers Index (PMI) was 53.0, a decrease of 3.1 from 56.1.

As you likely know, most economist call manufacturing the “canary in the coal mine” for the US economy as it often shows weakness before other areas. We are going to discuss these new economic facts…what it means for the stock market outlook. All that and more is coming your way in this week’s commentary.

Fortunately we have our proprietary ABS Matrix which shows us what could be decided relatively to our asset management styles and how we can position ourselves. 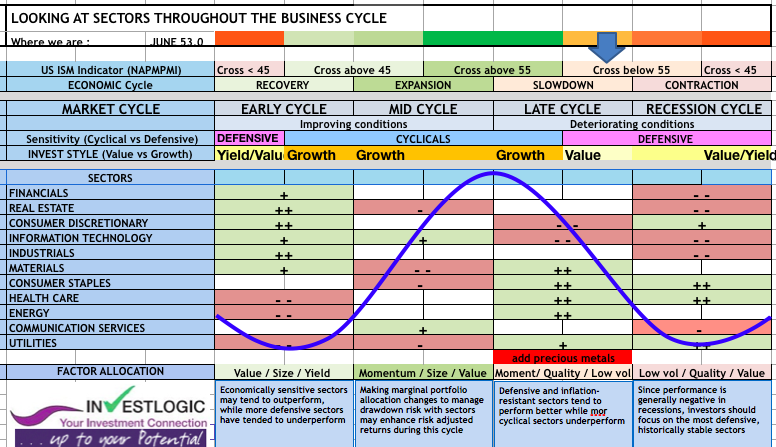 The worry of the moment is  economic growth. That’s not unreasonable, as the latest update US gross domestic product declined at an annualized rate of 1.6% in the first quarter. With the huge exceptions of the Covid-scarred first two quarters of 2020, this was the weakest US growth since the spring of 2009: 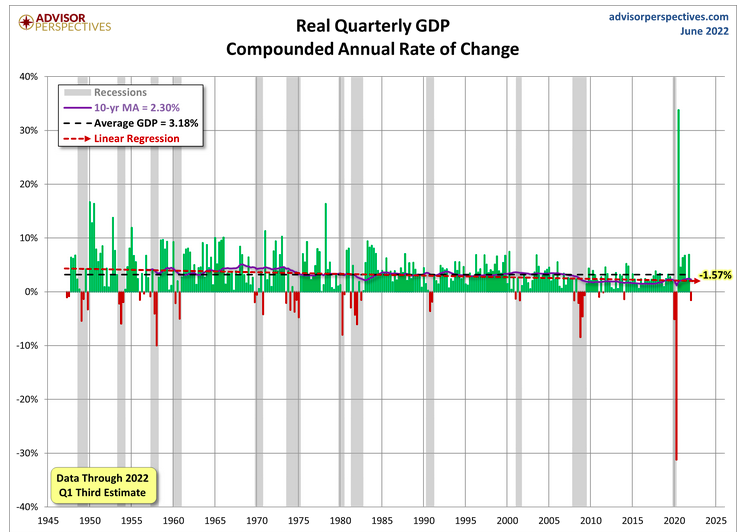 In fact, GDPNow from the Atlanta Fed reads it loud and clear with a negative revision for the US economy down to -2.1% for Q2. Ouch!

The latest reason for pessimism about the economy comes from the June ISM supply manager surveys for manufacturing. They were unambiguously disappointing. Over time, the surveys have been good leading economic indicators, scaled so that a number below 50 means a contraction, while numbers above it signal growth. On that basis, US manufacturing is declining fast, but is still not yet into recessionary territory. 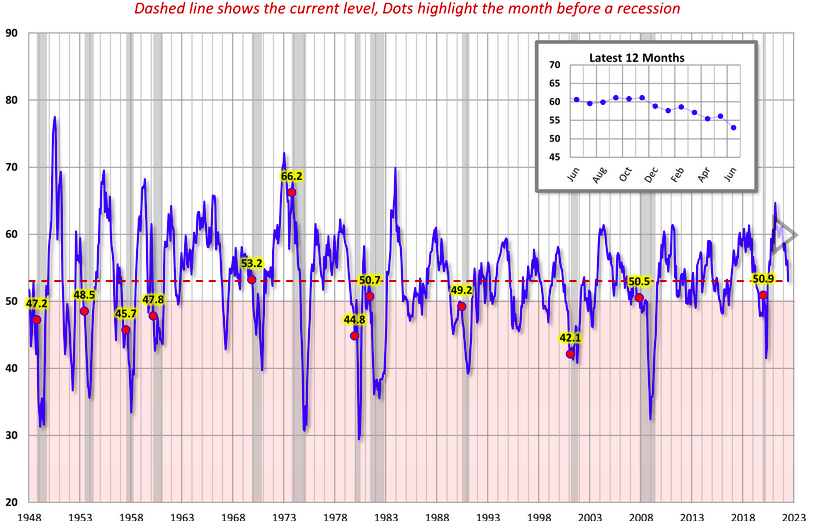 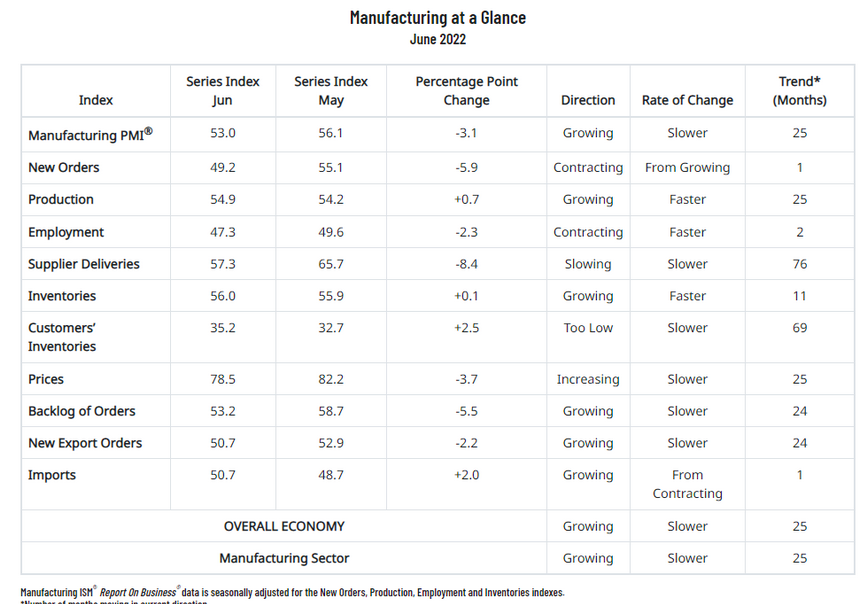 With inflation already running at 40-year highs, the risk of an economic recession has risen markedly in 2022. Historically, when inflation rises by more than 5% annually, such has triggered an economic contraction.

Something just isn’t right, and consumers have a gut feeling it’s not, even if jobs and spending remain robust.

Whether the odds of a recession are 30,40% or (*shudder*) 99%, fear can make itself into reality, if it impacts the public’s willingness to open their wallets in an economy overwhelmingly powered by consumer spending.

When Does The Recession Begin?

Market commentators are now determinedly saying that the recession (which they never forecast in the first place) will be shallow. That is again a normal spurious landmark we pass at this stage in the cycle before all hell breaks loose and both the economy and markets collapse.

Perhaps the more interesting question is not how deep the recession will be, but how large the fall in yields will be? The recent inflation surge broke the close link between the real economy data and bond yields.

Let’s assume – plausibly – for a moment that the US economy does suffer a hard landing and the S&P collapse resumes apace. It goes without saying then that at some point rising unemployment and chaos in the markets will force the Fed to capitulate, or as they will euphemistically call it, pause their tightening cycle! And then the next step as the economy collapses will be to slash rates back to zero and resume QE. We have been on this trip before, and we know what happens.

The counterargument to this is that the Fed will stay the tightening course because of sky high inflation. And they may do so for a short while, but what if headline inflation collapses?

Lower commodity prices may be signaling peak inflation in the US, which is positive for stocks, though a strong dollar and weaker overseas economies are negative for earnings of US multinationals.

That brings us to the final question: “Will equity markets rebound from the current bear market (a decline of at least 20% from the last peak), or will they plunge even lower? Most likely, they will plunge lower,” wrote Nouriel Roubini. “After all, in typical plain-vanilla recessions, U.S. and global equities tend to fall by about 35%. But, because the next recession will be both stagflationary and accompanied by a financial crisis, the crash in equity markets could be closer to 50%.”

This is a recession. And thus a bear market. Stocks going down in coming weeks and months is the most likely outcome.

The realignment of market prices and valuations is always a brutal process. While many believed the Fed had eliminated bear markets and economic recessions, the business cycle can only be delayed but never repealed.

HOW, WHEN & WHERE we find bottom is the great mystery. But as long as you appreciate the big picture on these things you can align yourself to the prevailing trends and find a way to outperform.