Thunder Road Report : Into a Bubble ?

Buying Time and Why there is no Plan B 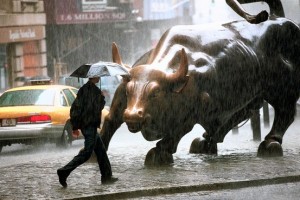 Policy makers are pushing monetary systems and experimental policies to their limit, so shouldn’t we consider the possibility of correspondingly extreme outcomes in financial markets in due course… cause and effect?

After Lehman, policy makers went “all-in” on bailouts/ZIRP/QE etc. This avoided an “all-out”collapse and bought time in which a self-sustaining recovery could materialise. The Fed’s tapering threat showed that, five years on from Lehman, the recovery was still not self-sustaining. Mylchreest’s study of long-wave (Kondratieff) cycles, however, leaves us concerned as to whether it ever will be. More commentators are having doubts; and the problem looming into view is that we might need a new “plan.” The (rhetorical) question then is “Have we really got to the point where it’s just about more and more QE, corralling more and more flow into the equity market until it becomes (unsustainably) ‘top-heavy’?“

Does the incoming Fed Chairwomanhave a new plan and, more importantly, one which could work? We have our doubts, the default strategy being continued reliance on liquidity-driven asset bubbles, while hoping for the best in terms of traction with the real economy. Interestingly Paul questions at the end the systemic risk link to the largest financial institutions and the repos ?

“The unspoken benefit from tapering would have been to free up the QE-driven shortage of “high quality” collateral (i.e. Treasuries and MBS) in the repo market. In the words of the Oliver Wyman consulting firm, the repo market is the “structural backbone of US financial markets” and its primary source of leverage.”

The IMF, Bank for International Settlements, Bank of England, US Treasury (TBAC) and Janet Yellen have all warned about the risks from the repo market in recent months. We also wonder whether Dallas Fed Governor, Richard Fisher’s, post-FOMC quote…

“The largest financial institutions are a dagger pointed at the heart of the economy.”

…was an oblique reference to repos?

With US$3.47 trn of securities on the Fed’s balance sheet (US$2.06 trn Treasuries), the Fed has plenty of ammunition with which to supply the repo market if financial markets become “stressed”. This should provide a substantial stability “buffer” in the early stages of a crisis in the US.

However, we are sceptical that it will be enough if there is a sharp deterioration in the global economy, or one or more major financial institutions get into trouble. For example:

We spent quite a lot of time in this report talking about “duration” in one form or another. Then you stop to think that there’s US$4.6 trn of leverage in US financial markets which is largely OVERNIGHT.

Here we go again, creating another asset bubble for the third time in a decade and a half,

see previous reports   here and there