As Bloomberg author John Authers notes : one of the best moments in “Pulp Fiction” comes when Samuel L. Jackson is questioning a hapless victim and breaks off to shoot someone else in the head. “Oh I’m sorry, did I break your concentration?” he says.

In the same way, it’s very easy for what now looks like the possible imminent invasion of Ukraine to break everyone’s concentration. There are very good reasons why it should. Many established certainties of the world order would be scrambled by such an event, while in markets it is reasonable to assume that such a shocking incident would lead to lower bond yields once more, and higher oil prices. -see below-
week February 7 to 11, 2022

At one point on Friday the US market was up 5% form the January 27 low. Then came a ugly red bear on Friday afternoon. 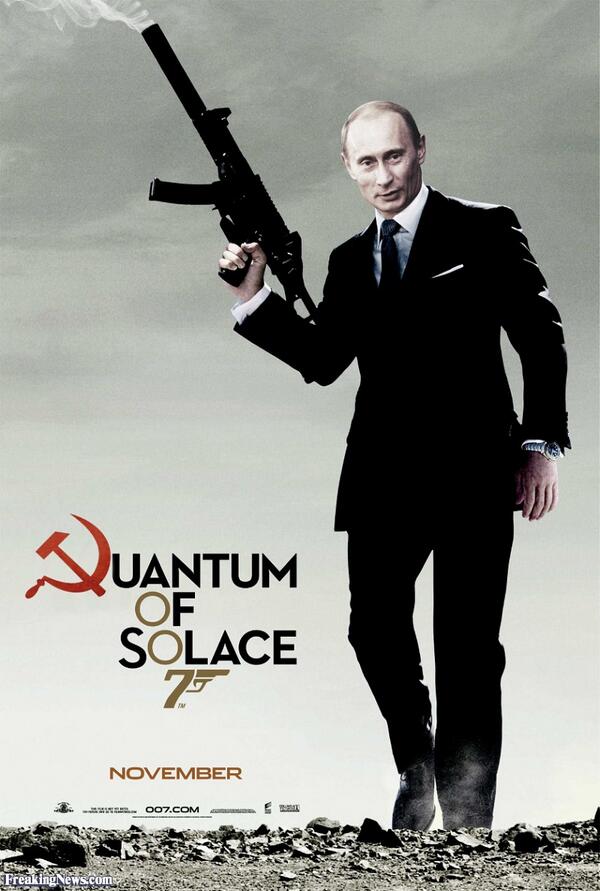 The current market environment is far tougher to risk manage than 2021. Volatility remains high in the markets, reflecting the nervousness of market participants due to

Equities, especially tech and growth stocks, came under pressure after the explosive inflation data, and many are warning that the recent volatility could rise across all asset classes in case of a policy mistake (acting too late, too strong, or not strong enough). However, should the rate hikes successfully put a lid on price pressures this year, early losses could be followed by strong gains for equities.

Most major indexes did turn lower as per last Thursday, — or the increased downside momentum and short-term overbought conditions— that would suggest a decline to new lows. 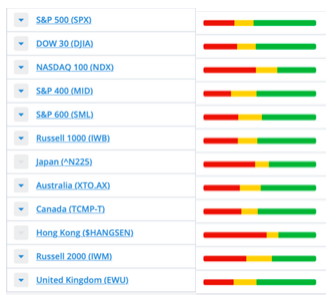 With the market sliding on Friday and breaking the 200-dma and indicators still negative such suggests a retest of January lows is a rising probability and we expect the move to eventually ends in a “C”wave down to 3900 for S&P500.

SEE OUR REPORT : ANATOMY OF A BEAR MARKET (click) 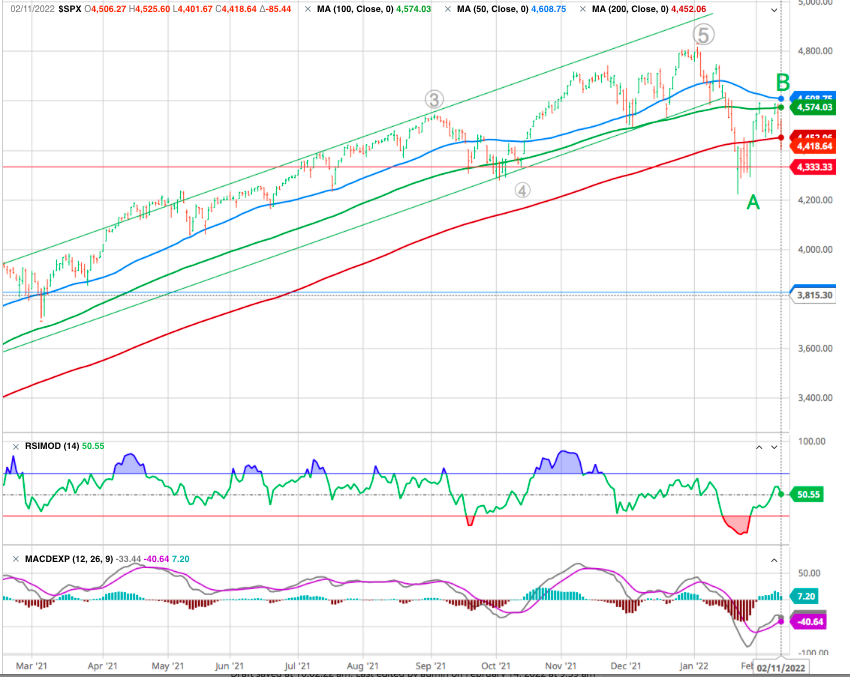 On the subject of the earnings season, perhaps the single most important trend to emerge is that companies are markedly less optimistic for the future. As this chart from Bloomberg Jim Bianco shows, companies are suddenly guiding more bearishly than they’ve done in a decade. It’s been easy to miss amid the excitement over inflation, not to mention the possibility of war in Europe and the continuing pain of the pandemic. But it would be wise not to ignore: 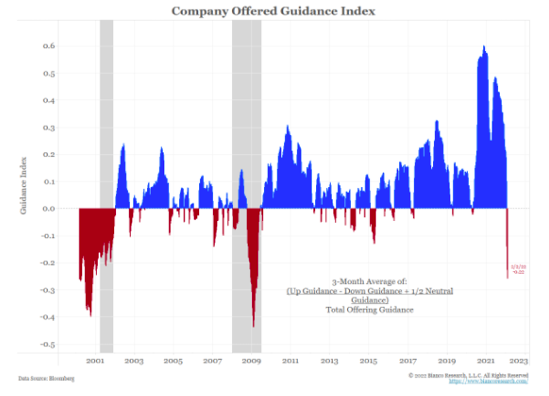 US small vs large caps: The Russell 2000 has been underperforming the S&P500 since the beginning of the year, yet we would still not encourage buying the dip in US small caps.

Sometimes we’d like to talk about something other than inflation… but how can we do that when prices in the United States are continually rising and the Fed has to react vigorously? 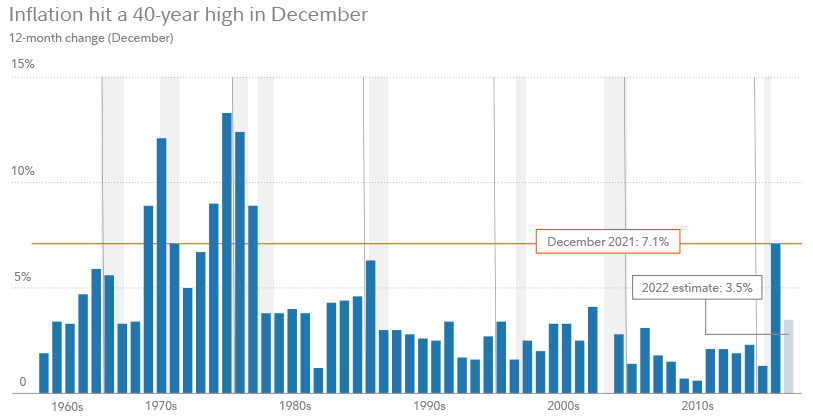 The cost of living rose by an average of 7.5% between January 2021 and January 2022, according to statistics published Thursday afternoon. It reinforced the already strong impression that the Fed will have to work hard to catch up.

However, with inflation at multi-decade highs, we expect an imminent peak in inflation we do not think that will be necessary:

While stocks overall have historically fared well when inflation was as high as 5% and have provided investors with hedges against inflation, some categories of stocks have performed better than others depending on how sharply the CPI was rising or falling.

Historically, when inflation has slowed but remained higher than average, value stocks—those that trade at lower prices than stocks of other companies with similar earnings—have been among the best performers. But while value may be poised to outperform the broader market, discovering value can present challenges, even for experienced investors.

Value stocks now make up just 18% of the total value of US stocks, which means the large-blend or large-cap core mutual funds that are basic building blocks of many portfolios may be much more heavily weighted toward growth than they once were. Investors would be wise in adding value stocks to help diversify their portfolios.  Having exposure to both growth and value stocks may lead to smoother investment performance over the long-run.

Making the case for materials: the macro backdrop looks supportive,  indicators remain bullish for the sector, and it is attractively valued both on an absolute and relative basis;

The prospect of more policy support in China, higher commodities prices, and healthy earnings across the sector should all in our view support materials, while the sector’s historical correlations with economic activity data and inflation also suggest room for more upside performance both in the US and Europe on a relative basis for materials stocks. We continue to prefer the more cyclical and reflation-oriented sectors (i.e. banks, energy, materials and industrials), that historically tend to thrive in an economic environment featuring rising interest rates, strong economic activity and higher levels of inflation.

Energy has had a terrific run recently, and tailwinds remain. However, the time may have come to be more selective;

Oil prices are up 23% thus far in 2022 and are now above $90 per barrel for the first time since 2014. Rising geopolitical tensions among key oil producers—namely the US and Russia—have added to some supply issues, helping drive prices to their highest level in more than 7 years. On the flip side, with the Federal Reserve hinting at pulling back some of their monetary support for the US economy, many commodity market watchers think this dynamic could act as a brake on oil prices over the near term.

In one of our previous posts, we looked at price behaviour from EURUSD, where we had the same sequence play out almost identically to historic price action. The eventual return of Iranian oil would mean an increase in supply of nearly 2 million barrels per day, which represents a real breath of fresh air in a market that is tight due to the dynamics of crude demand. 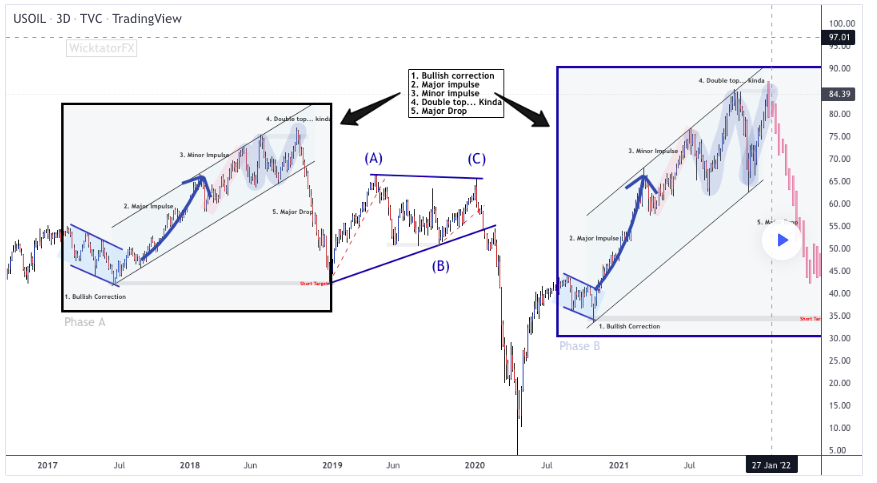 The same thing is probably about to happen in Oil. Buckle up.

Gold and Bitcoin   do they sleep together ?

GOLD has gained some ground this week, but has fallen sharply since the release of high inflation figures in the United States. The mechanism at work is simple, rising consumer prices should push the Federal Reserve to act quickly on its key rates, which impacts the yield curve with the T-Bond yield now exceeding the 2% mark. Real yields have also increased, which penalizes gold, which by definition delivers no yield.

The cryptocurrency market is resurfacing after long weeks in troubled waters. The price of bitcoin has risen more than 15% in the last seven days and is back over 43000.
This does not necessarily mean a quick return to the historical highs reached three months earlier. Let’s not forget that it still suffered a 50% drop over this period and the road could still be long and full of pitfalls before seeing bitcoin erase this counter-performance, especially since the macroeconomic context does not necessarily play in its favor.

What’s the fair value of Bitcoin? Around $38,000, or 13% below the current trading price, according to JPMorgan analysts led by Nikolaos Panigirtzoglou. The estimate is based on Bitcoin (BTC-USD) being about four times as volatile as gold, citing “the biggest challenge for Bitcoin going forward is its volatility and the boom and bust cycles that hinder further institutional adoption”.

Although JPMorgan’s long-term theoretical target – which would mirror the total amount of gold held privately for investment purposes – suggests the crypto could potentially reach $150,000.

And now Goldman Sachs says Bitcoin is vulnerable to interest rate hikes in the US despite increased adoption. In fact, this is the main reason why there could be such a big impact as BTC has become correlated with macro assets in the past 2 years.

Indeed, consumer sentiment (as measured by The Michigan Survey) is already at recession levels.
US Consumer Sentiment has fallen close to the lows of the 2008 recession. It might lead to  a rapid ebbing of the economic cycle in H2 of this year, and with the ISM falling below 50,  driven in large part by the tightening already in the system, pulling bond yields sharply lower again.

The chart below shows the latest reading from the American Association of Individual Investors (AAII) market sentiment survey. It’s a poll that’s been conducted weekly since 1987 to measure whether retail investors’ six-month outlook is bullish or bearish. 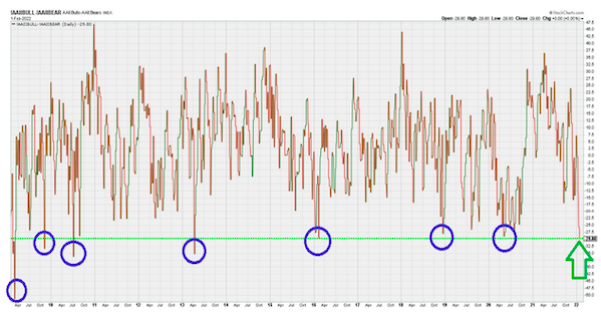 You can see when retail investor sentiment drops to extremely bearish levels at the points circled in blue.
Current sentiment, at the green arrow, just reached the lowest point since 2013 (fourth circle from the left). And it’s not far from the extreme low near the market bottom in the 2009 financial crisis.

In the coming years, and perhaps the coming quarters, the Federal Reserve will have to navigate the collapse of a yield-seeking speculative bubble created by its own policies. The greatest difficulty will be during periods when investors are inclined toward risk-aversion.  Faced with a combination of record speculative extremes and deteriorating speculative conditions, investors may want to remember that the best time to panic is before everyone else does.

Consider the policy responses to the 2008, 2010, 2019 and 2020 market sell-offs, and the support given through the colourfully dubbed “Greenspan, Bernanke and Yellen Puts”, after successive Fed chairs.

Today, the Fed has a serious inflation problem, and even if the S&P 500 corrects, the Fed will have to ignore it because it is behind the curve and its credibility is on the line- at least for a time !

Unless the spiral is broken by higher interest rates, global liquidity will ultimately bound higher. At the same time, asset allocation has been put on a potentially self-destructive autopilot that ignores sensible investment criteria, so that money is focused on the largest stocks, driving their valuations and sometimes even their owners towards the moon.

A renewed dose of QE, or a “Powell Put”, seems the inevitable remedy for the next stock market sell-off. In short, future growth of global liquidity has seemingly become institutionalised by these debt burdens.

The Fed put is gone for now but not for good ! 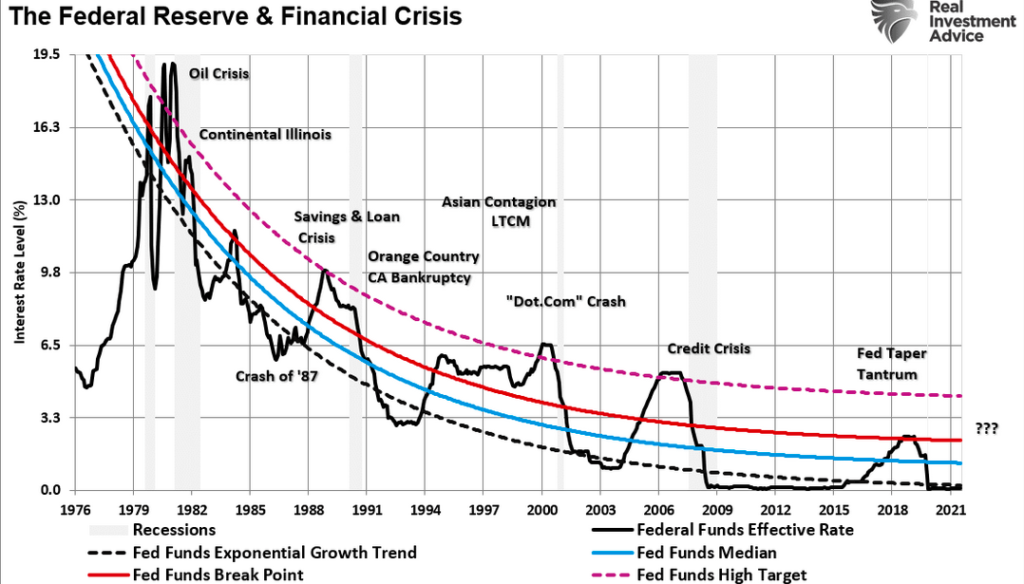