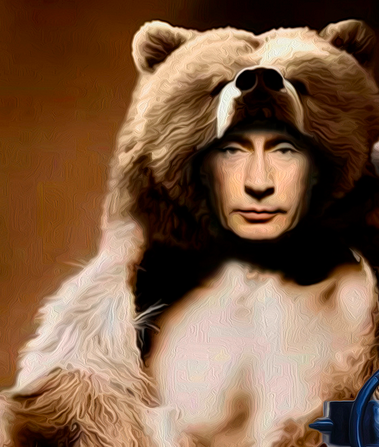 Volatility persists, along with the uncertainties that currently inhabit the market. This week, it has moved with each new developments regarding Russian soldiers at the Ukrainian border. After the pandemic pseudo-experts, we are seeing the emergence of Russian-Ukrainian geopolitical pseudo-experts (and my little finger tells me that they are the same).

As for good earnings releases, they are often shunned by traders who refocus on the macro-economy, especially since inflation is still very much with us. Statistics released  this week will not ease inflationary fears. In the US, January producer prices rose twice as fast as expected and consumption is still in the black. In the UK, prices rose by 5.4% year-on-year. Everything points to a vigorous monetary response through rate hikes, which is only moderately pleasing to financiers, who are hungry for cheap money.

Pessimism is gaining ground and markets are naturally correcting, which is rather healthy, given the rapid rise in prices in 2020-2021. However, be careful not to confuse a legitimate correction with a bear market: What is the underlying trend in the the current turmoil.

Is a Bear Market Inevitable ?

Both bulls and bears can point to plenty of fundamental and technical evidence to support their outlooks. Given this uncertain mix of data, we suspect the move out of this consolidation could be powerful… one way or the other.

Looking at the Swiss Market Index (SMI) we can get some elemets of answer. 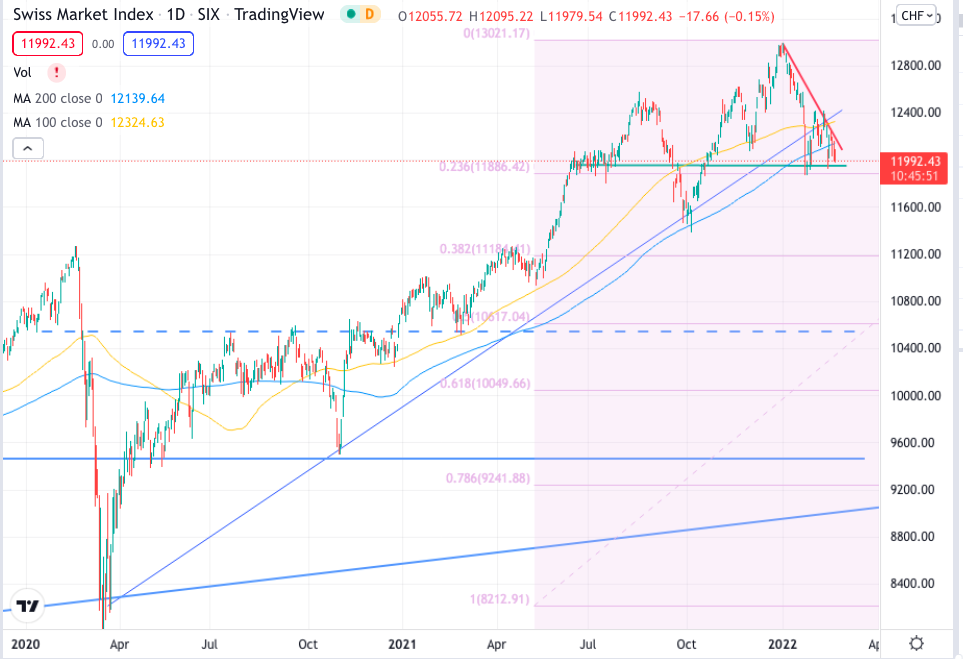 So far, the market reacted to any sharp pull back with a recoup of the uptrend. After a long period of only 5% drawdowns, the 10% market pullback in January “felt” like a crash. However, if we go back to 2009 and draw a trendline from there we see the recent correction has done little to violate that bullish trend (lower blue line).

First, for this market is going to maintain its bullish bias, it must hold those January lows (11’900) corresponding to a support at 23.6% set back otherwise we are looking at a potentially deeper correction. The good news, if you want to call it that, is the market has now reversed its previous overbought condition.

Currently, the risk to investors is a market pullback to October lows equal to the 38.2% correction (11200). A failure of that support would suggest a deeper correction to 10100 and 61.8% Fibonacci retracement levels. Such levels would approach a 20% decline.

As you can also see above, SMI rebounded to touch the January down trendline and each time turned lower as it touched the 100DMA and then the 200 DMA. I t proves the strong bearish sentiment. In other words, this pattern suggests SMI could move significantly lower soon.

On the contrary, if the index is to close back inside this range instead, it could suggest a bullish resolution is more likely.

The same is true for  major indexes and the SPX . In the US  (hence developed markets) it is worth noting the massive advance of the market from the 2009 lows was a function of more than $43 trillion injected into the economy by the Government and Federal Reserve. With inflation now surging and the Fed trapped into a rate hiking cycle, there is a risk a market pullback could morph into a bear market.

For the latest we can identify a possible “bear signal” on our monthly indicator. 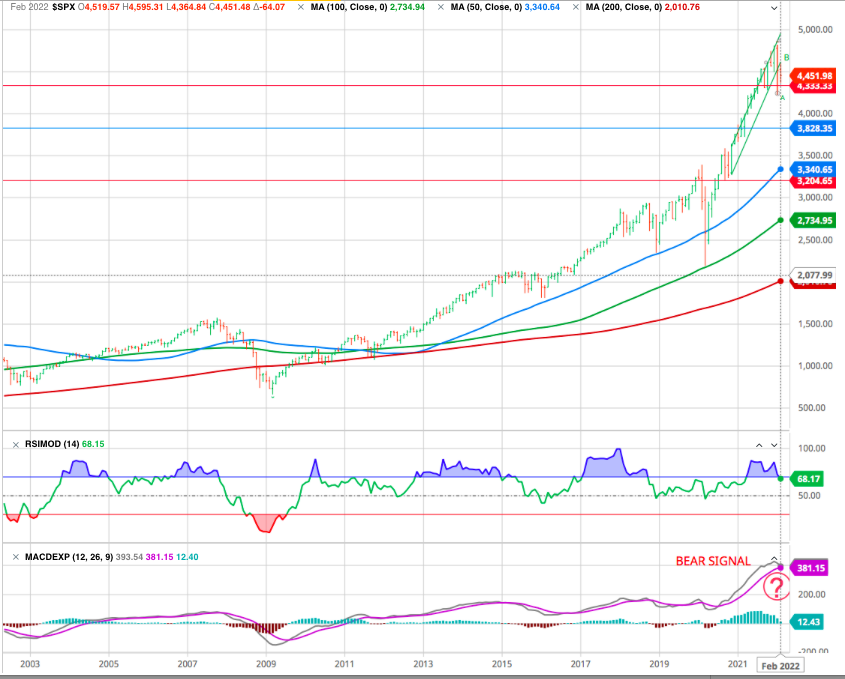 You can guard against this danger with a simple rule of thumb: Do not buy stocks below the 200-day moving average.

To borrow a term, investors are now convinced that the stockmarket has decided to invade into bear market territory. Interesting to note how rare it is for bullish sentiment to drop this low. It may sound hard to believe, but net bullish sentiment is lower now than its was at the depths of the COVID crash and has fallen to its lowest level since early 2016 when Jamie Dimon ‘saved the market’ with an insider purchase of JP Morgan (JPM) shares.
Besides that period, the only two other periods where net bullish sentiment was as low or lower was in Summer 2010 and during the Financial Crisis. 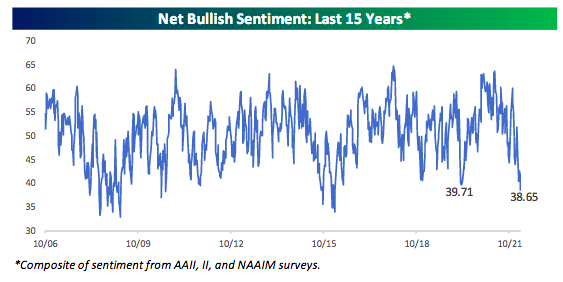 Why is it so hard to accept that speculative bubbles can burst? Interest rates were driven to zero for a decade. Yield-starved investors chased stocks to valuations beyond the 1929 and 2000 extremes. That speculation front-loaded more than a decade of future market gains into the present. Those gains are now behind us, embedded in breathtaking multiples. If history is any guide, a collapse in valuations is likely to return those gains to the future.

In the coming years, and perhaps the coming quarters, the Federal Reserve will have to navigate the collapse of a yield-seeking speculative bubble created by its own policies. The greatest difficulty will be during periods when investors are inclined toward risk-aversion.  Faced with a combination of record speculative extremes and deteriorating speculative conditions, investors may want to remember that the best time to panic is before everyone else does.

Does this mean a “bear market” is inevitable? No.
Does it mean you should sell everything and go to cash? No.
It does mean you should at least be aware, and prepare for, the potential risk.

Geopolitical tensions are also impacting industrial and precious metals. Gold is thus back in the spotlight and taking advantage of its safe haven status. The price of the barbarian relic has indeed jumped to briefly reach 1900 USD. Still in the precious metals register, silver is trading near USD 24 per ounce while platinum and palladium are up to USD 1088 and 2320 respectively.

Oil markets remain tense and particularly sensitive to the Ukrainian risk, with Washington and Moscow sending mixed signals. However, prices have fallen back slightly this week and this is enough to end their eight-week run of consecutive increases.

Markets are also eyeing the Iranian nuclear talks, which appear to be moving in a positive direction. Tehran has said that a deal is close, raising hopes that Iranian oil will soon be back on global markets. Brent crude is trading around USD 91.50 a barrel.

Just one figure to keep in mind: if energy commodity prices (oil, natural gas) were to return to their pre-pandemic levels, the inflation rate in Europe would move into negative territory. A scenario with the (likely) consequence of a return to negative bond yields and an outperformance of growth stocks.

Cryptocurrencies : Bitcoin and its peers are testing the nerves of crypto-investors. While the price of the crypto-currency seemed to resume the bullish path in recent days, in the last 48 hours, the market leader has shed almost 10% of its valuation and thus returns below 40’000 -see bottom-

The Crypto vs Dotcom Super Bowl.

Remember the 2000 Super Bowl at the peak of the dotcom mania, where newly minted dotcom companies spent most of their entire IPO proceeds to buy Super Bowl commercials to generate “eyeballs” to their websites to drive their stock price higher?

The Super Bowl commercials were clearly a signal that marked the top of dotcom mania, which crashed a few months later in March.

Fast forward to the 2022 Super Bowl which pointed towards the powerful pull of speculation that has enraptured so many over the past few years as betting platforms and cryptocurrency exchanges flooded the air with eye-catching spots.These ads weren’t cheap. NBCd Universal reportedly charged $7m for 30-second spots, the highest price ever. 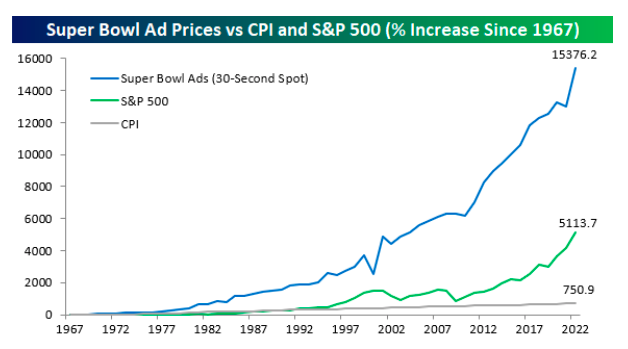 This Super Bowl felt like a coming-out party for the exchanges. Four of them bought ads: EToro, Crypto.com, CoinBase and FTX. Some people nicknamed the contest “the Crypto Bowl”.

In 2000 the dot.coms needed more eyeballs and the ads were generated to lure in more “greater fools” to keep buying their worthless stocks to remain viable.

We don’t know how this all ends but know the history, folks: The winner of the 2000 Super Bowl? The Rams, ….

The number of crypto-currencies has increased 10-fold in the space of five years. In other words, there are 10 times as many assets to speculate on, and some are predicting that they have found the “next bitcoin.” Naturally, the money supply is diffusing into all these new alternatives to bitcoin and ether. Although many of them are actually scams-fraud-scams that lead to the ruin of early traders-investors. Yes, because it is undeniable. Most of the players in the market have an appetite for risk.

But it’s a safe bet that even those who invest in this market, at least a large portion of them, are buying crypto-currencies without mastering the underlying technology, speculation still dominates this market.

Once the underlying technology is better understood, which will come through concrete and more tangible use cases, only true blockchain solutions will remain and dominate. For now, Bitcoin and Ethereum retain their leadership status. But maybe we don’t know the best crypto-blockchain solutions yet. These will probably emerge in the coming months/years.