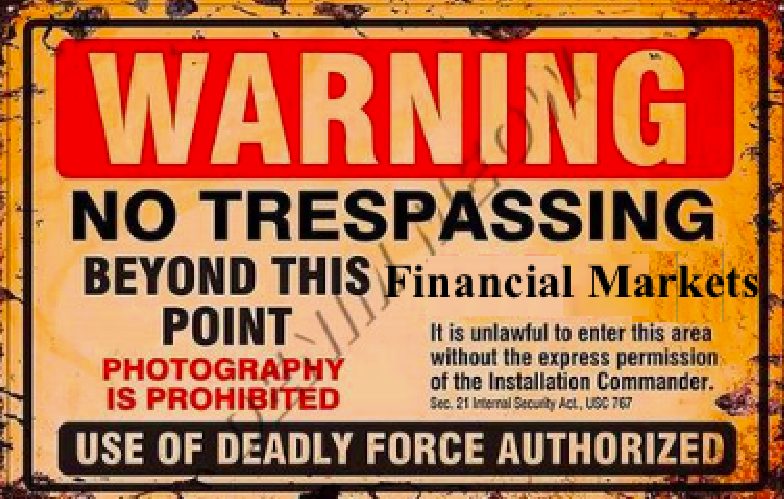 Contrary to previous expectations, U.S. inflation did not take the nice downward slope that the market had imagined,after a hotter-than-anticipated consumer price inflation report, with the headline print for August rising 8.3% from a year ago, raising fears of another aggressive tightening next week by the Federal Reserve.

See below the Goldman Sachs research “Bear Repair : The Bumpy Road to Recovery“ 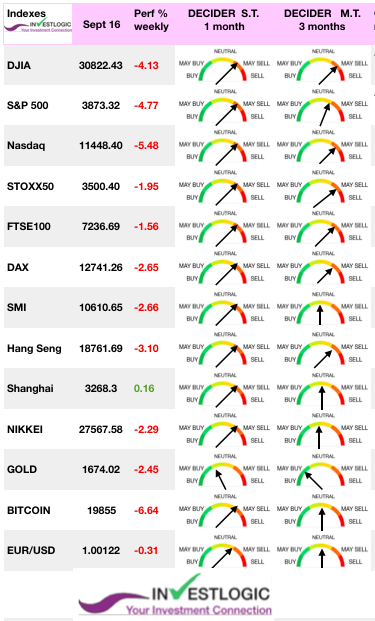 The discrepancy between investor sentiment and macroeconomic reality caused an earthquake on Tuesday. Stocks hit its lowest point on an intraday basis since mid-July on Friday visible in the drop of more than 4% in the S&P500 and growth stocks fared worst, with the Nasdaq Composite falling nearly 5.5%.

We note that the VIX index remains well below the levels seen at the start of the pandemic.

Bond yields continue to rise and indexes are logically undergoing further declines. Volatility is not expected to abate.

On Friday, a gloomy outlook on the global economy from shipping giant FedEx sent stocks sharply lower after the transport giant pulled its earnings guidance for fiscal year 2023 and its new CEO told CNBC that he expected a global recession. Here’s a critical excerpt from FedEx CEO Raj Subramaniam

When the Federal Reserve actually goes dovish, they are acknowledging that we are in a recession.

If that’s the case, a full-fledged recession could be around the corner, with rapidly rising borrowing costs pushing any prospects for a “soft landing” off the table. 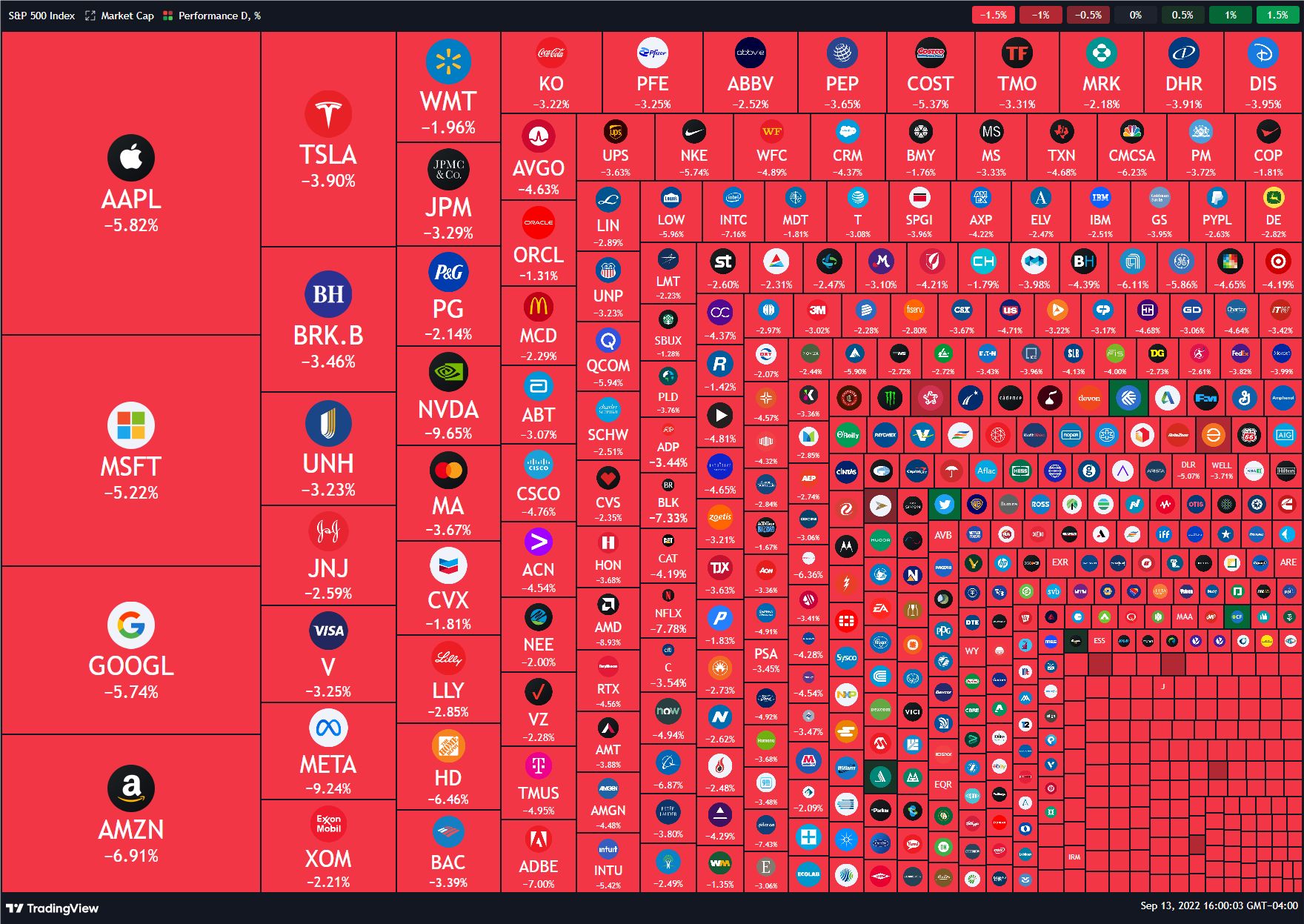 See our previous “What are the charts telling us “

The S&P 500’s bear market began right around the start of 2022. Since the bearish trend began, we’ve seen a series of lower highs and lower lows. The most recent high occurred in mid-August when I put out a near-term top alert. Now, things are becoming more bearish. After the recent high, the market attempted to rebound but got smacked down by Jerome Powell’s Jackson Hole remarks. More recently, the market tried to muster another rally, but the higher-than-anticipated inflation numbers brought a quick end to that attempt.

If all three major U.S. indexes – the SPX, the NDX, and the Dow Jones Industrial Average (DJIA) – close below their June intraday bear market lows, the probability of a prolonged bear market will rise dramatically.

Given the worrisome fundamental backdrop we’ve been monitoring for the past several months – alongside the still-bearish message of our tools and indicators – a break below these levels is likely to lead to significant further downside in the months ahead. Technically, this past week was not good. The market failed at the downtrend resistance line (upper dotted red line), broke below the 50 and 100-dmas, and took the 3900 support. Those levels remain key resistance for the market currently. Furthermore, the MACD signal, close to triggering a “bullish buy signal,” also failed to trigger and continues to work its way lower.

Now, we’re looking at an increasingly bearish technical image as we are approaching our identified pivot point (red circle) which might well determine the next market move !

Once below this level, the S&P 500 should at least retest the prior low around 3,700-3,600. However, a likelier scenario is that the S&P will make a lower low, dropping the SPX down into the 3,300-3,200 range next, a 61.8 % Fibo retracement and the long support(red horizontal line). As you can see in the chart, this area also acted as both support and overhead resistance several times

If market fundamentals continue to deteriorate – if inflation remains stubbornly high, the economy falls into recession, corporate earnings weaken significantly, etc. –  the second leg would be roughly one and two-thirds the length of the first, another common target in bear markets. The next target near the 2,745 level could come into play. This level is about 25% below the June low. 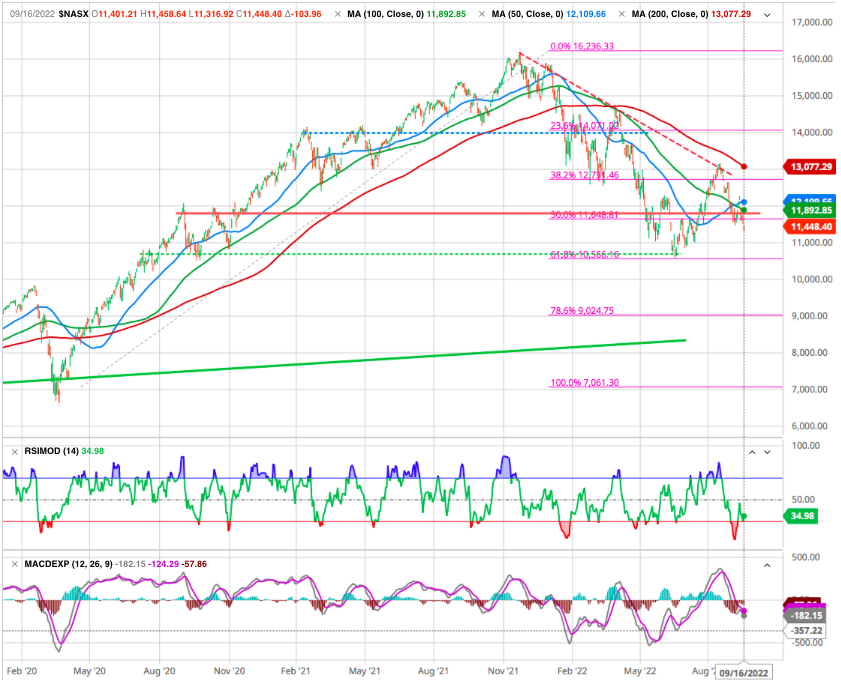 If you want to call it that, the good news is that Friday, which was options expiration, saw a massive surge in volume, suggesting a temporary low.

The same is true for the European markets where prvious low should be overruled. 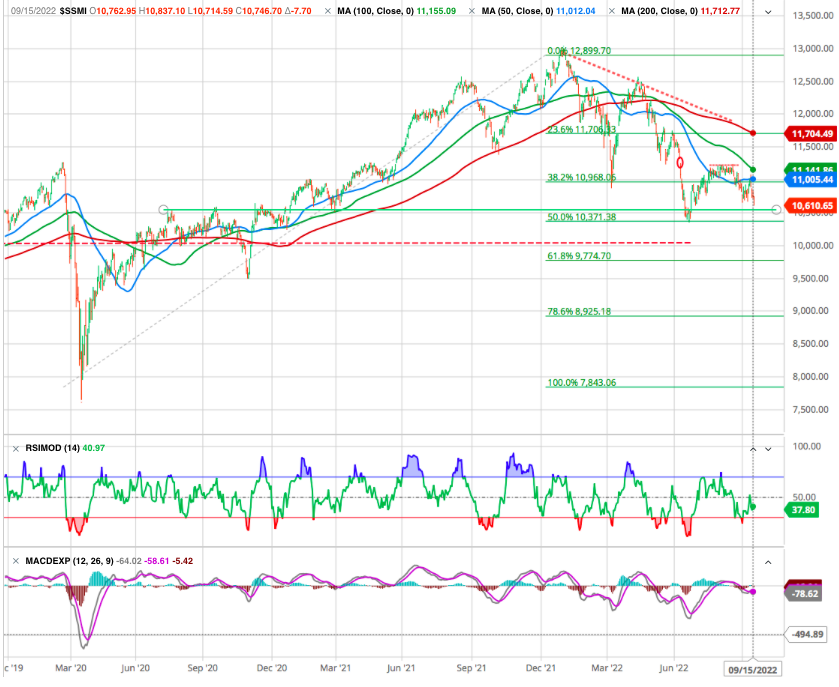 In precious metals, gold broke down to the USD 1,700 per ounce mark. The inflationary context is counter intuitively not benefiting the precious metal. 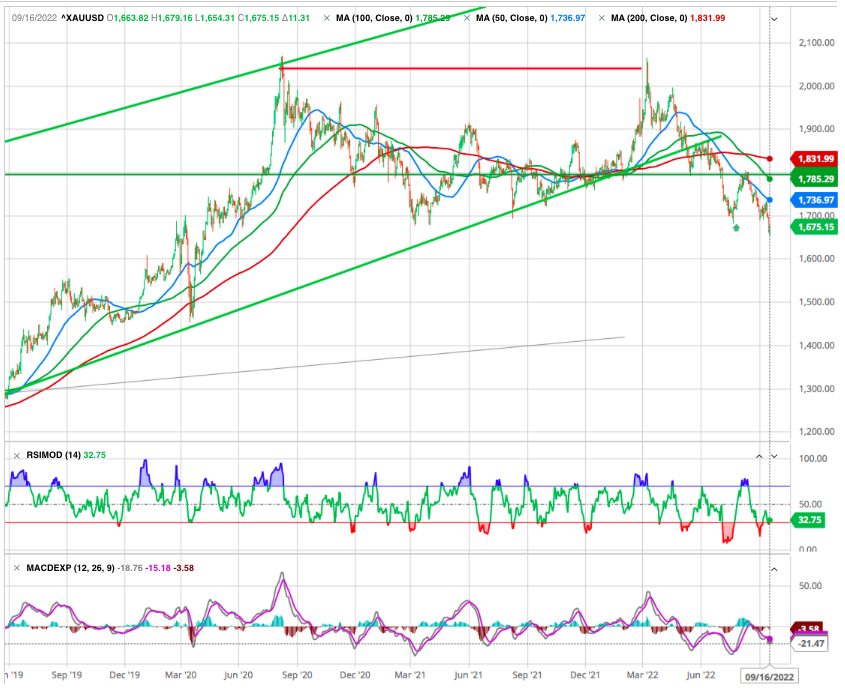 In our opinion it will change once the USD will top. 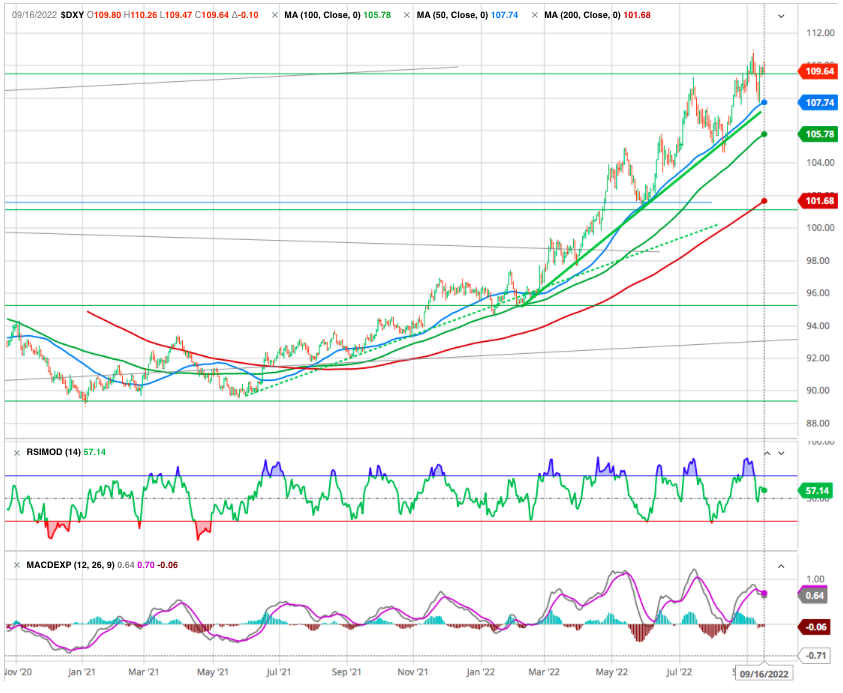 Last week’s surge in cryptocurrencies was wiped out by Tuesday’s relapse in risk assets. Bitcoin is once again trading below the USD 20,000 mark. 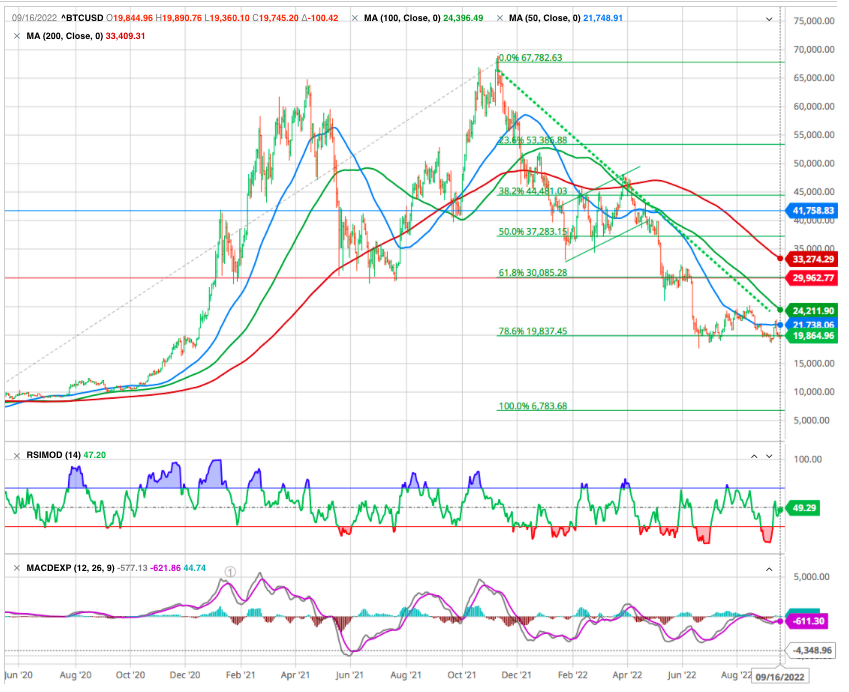 As for Ether, the last few days have been difficult: the major technical shift that took place during the week on the Ethereum blockchain went well, but speculators chose to “sell the news” instead.

This shift which transitioned from the proof-of-work (PoW) consensus mechanism to a proof-of-stake (PoS) model. The move aims to reduce the power needed to secure Ethereum by around 99.95%, easing the concerns of those worried about the environmental impacts of crypto.

A Look at Inflation

While inflation has decreased from the 9.1% reading, it remains remarkably high. Inflation is running hotter than we have seen in about 40 years now. 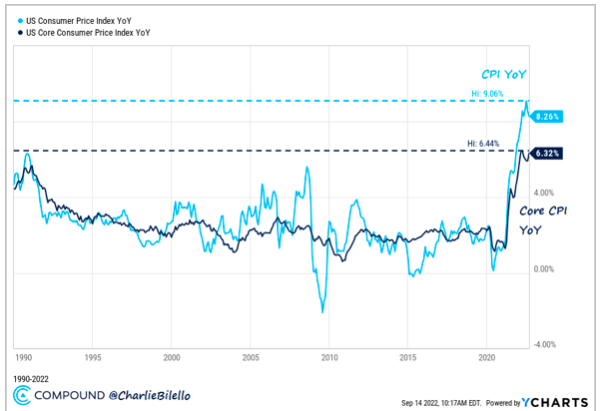 Worse, “core” CPI – which the Fed has typically paid more attention to because it excludes volatile food and energy prices – rose to 6.3% in August from 5.9% in both June and July. 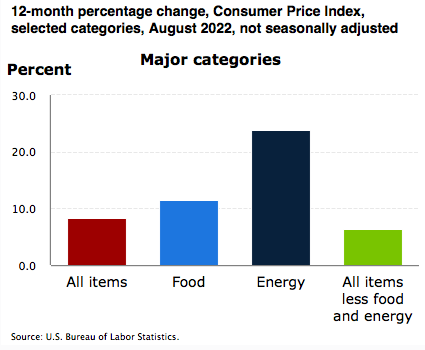 In a blog post for BlackRock    authors Boivin and Brazier noted that
Implicitly, central banks seem to believe that pain is trumped by the risk of inflation expectations de-anchoring – and that justifies aggressive rate hikes to “kill the bear.” Indeed, it would be justified if inflation expectations were unanchored. And it’s true that no one really has a good handle on how inflation expectations work: They’re anchored until they’re not. But contrary to when Paul Volcker took office as Fed chair in 1979, they remain anchored now. Unlike Volcker, they still have a stock of credibility to draw on.

The Fed Needs To Break The Market

No matter how much the Fed has tried, the market still doesn’t believe how serious the Fed is about bringing down inflation. The Fed has consistently said that it plans to raise rates to restrictive territory and hold rates there until there are clear signs that inflation is heading lower.

Wise people have told, “Don’t fight the Fed.” You don’t want to fight the Fed when the central bank is easing. We saw ultra-loose monetary policy since the 2008 financial crisis, and stocks did great for much of that time.

However, we are in a completely different economic environment now. As the Fed pulls liquidity out of markets, the cost of borrowing increases, growth slows, sentiment worsens, and risk assets deflate. Furthermore, we’ve underestimated the severity of the inflation problem and the Fed’s commitment to making it “go away.”

As  Lance Robert from RIA noted

“There is currently a large contingent of investors who have never seen an actual “bear market.” Their entire investing experience consists of continual interventions by the Federal Reserve. Therefore, it is not surprising that despite the recent price decline, they aren’t selling out of the market.”

This is the Fed’s battle, and it needs the market to align with its view if it has any chance of bringing inflation down. Because the Fed can only really move the front of the yield curve, but through communications and projections, it can heavily influence the longer-dated side of the curve, and that is the part of the curve the Fed has struggled the most with. 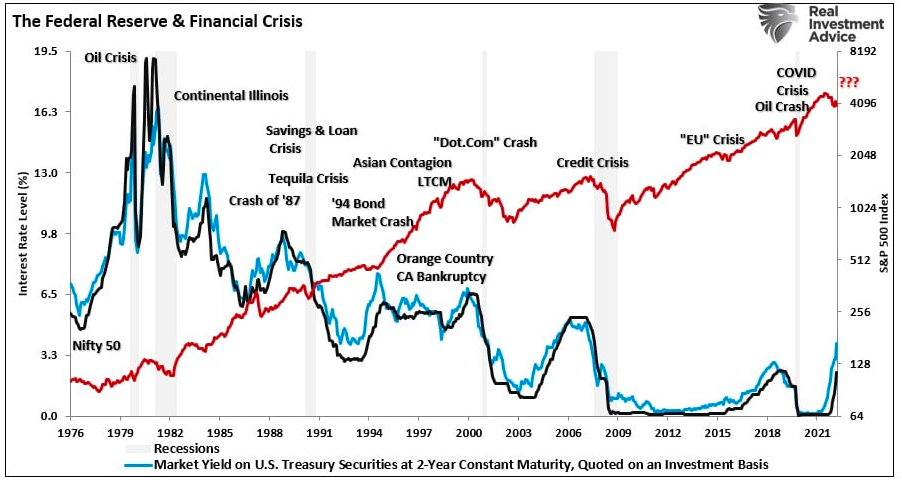 Mortgages continue to climb as well. The 30-year mortgage rate in the US has moved above 6% for the first time since November 2008, doubling over the past year.

Whether we see a 75 basis point hike or a full 1% increase next week is not that relevant. The fact is that the Fed is intent on increasing interest rates until inflation is under control. Unfortunately, the benchmark will be above 3% after next week’s meeting. With rates at such elevated levels, economic growth will weaken further, and there is no telling when the inflation problem may end.

Nomura now expects a terminal rate of 4.50% to 4.75% by February of 2023 before inflation is expected to cool rapidly,

So while stocks may rise sharply if the Fed only delivers a 75 bps rate, don’t be surprised if that rally fades quickly if the Fed can provide a hawkish message through its forward guidance. That is where the Fed can finally shock the markets and get them to break.

Because for the first time in many years, it may be the market that finally gives into the Fed, not the Fed giving into the market.

The risk of disappointment is high as history suggests the Fed will cause a “hard landing” in the economy. If that is the case, a full-fledged recession could be around the corner, with rapidly rising borrowing costs pushing any prospects for a “soft landing” off the table. A further decline is likely as investors finally give into fear. 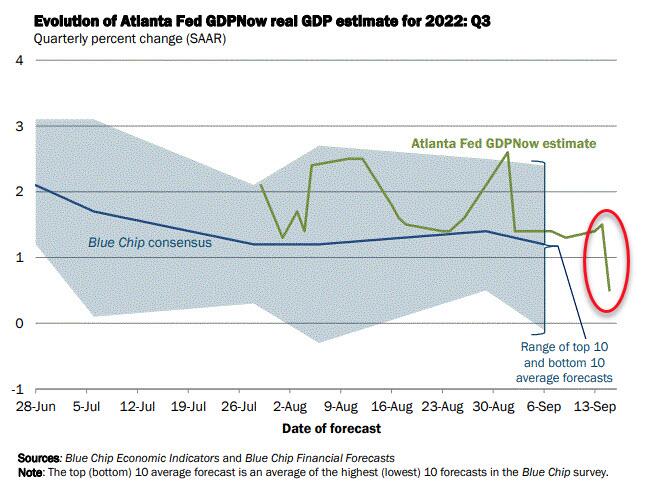 Globally the Fed is not the only game in town. Central Bank policymakers in the U.K., Switzerland and Japan will also meet during the week as the global fight against inflation intensifies.

Investors should sell any rally next week. The technical backdrop remains bearish, and with Fed Ex’s bombshell announcement, the fundamental backdrop likely took a sharper turn for the worse.