MARKETSCOPE : Blood in the Streets

This was a tough week for Wall Street due to fears about the impact of inflation on global economic growth. The market hoped rally ended abruptly as retail reports showed a recession is coming. Traders were trying to do some bargain buying on Friday. The S&P 500 Index tracked back late on Friday to avoid sitting in official bear market territory, but has now logged seven straight losing weeks for the first time since 2001.

Markets are bleeding hard, but the shorts right now are extreme, so we have liquidity to pump and maybe close in the green this week.

Investors seemed to worry that major retailers would be forced to pass on more of their higher input costs to customers in coming months, keeping inflation elevated. There was no place to hide this week: the consumer staples sector which was flat YTD has lost 8.1% with Walmart, Procter and Hershey all tumbling. Investors may be jittery going into next week with more retailers due to report. Comments from Fed officials during the week did little to calm inflation and interest rate fears.

The hawks are out in numbers. Western central banks seem ready to do whatever it takes to curb inflation. The markets are afraid that this will lead to a recession. The latest statistics are still relatively strong, but some of the richest countries may find it hard to escape a sharp downturn. There is also a lot of uncertainty about the side effects of rate hikes, for example on the housing market or on the speculative corporate debt market.

The market is reacting downward to bad news against the backdrop of a recessionary or even stagflationary scenario. Since the stock market leads the economy, a recession could already be here. Jeremy Grantham commented “We should be in a recession, mild or severe, is the question. But we should be in some sort of recession fairly quickly and profit margins, from a real peak, have a long way that they can decline”.

Our Chart of the Day shows the percentage of stocks trading above their  200 day moving averages (21.46%).  Make your own conclusions but we do not see the bottom yet. 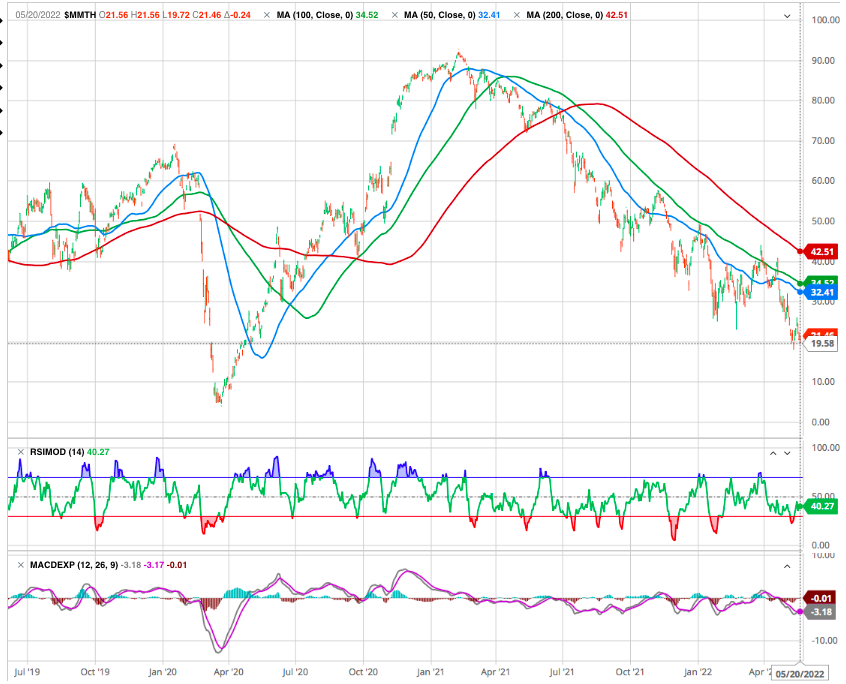 Although as noted previously, bear markets don’t go down in a straight line — indeed, bear market rallies are common feature. 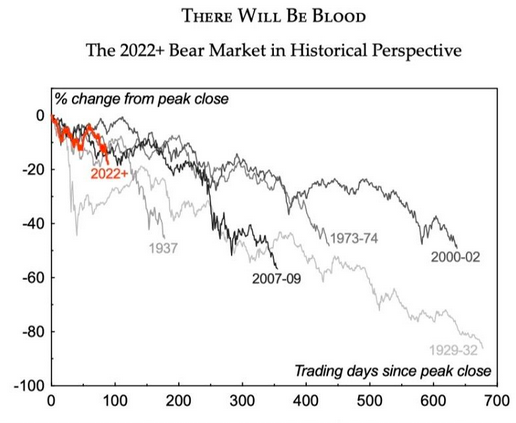 The markets reprice the excess valuations given to financial assets during the previous expansion. Higher valuations during expansions tend to precede deeper reversions during recessions.  As is evident, recessions are coincident with market corrections and bear markets. The problem with trying to avoid a recession, from an investment perspective, is this: by the time a recession is evident, it is often too late.

The market are often accompanied by a spate of negative news, making it very difficult for many investors to keep a steady hand. But now is a time to be patient and to avoid emotional decision-making.
STRATEGY & MARKET ALLOCATION OUTLOOK

As exposed is our latestwe continue to keep our reduced equity exposure at lower levels. We would use any  decent reflexive rally to increase cash levels further and reduce risk.

There is one question that investors must ask themselves before buying back into the market when it bottoms. Have the causes of the sell off,  created any paradigm shifts in consumer, business or macroeconomic behaviour?

In other words will anything be done differently when the US economy, and the global macroeconomic climate improves. This is an important question because many of the cheap (perceived) tech stocks might become irrelevant in the new economic environment if one emerges. It would be a mistake to assume things will just return to previous norms. Some crystal ball gazing is also a useful tool right now.

A sequence of stabilisation for oil, which oscillated this week between USD 105 and USD 115 for the two world references, Brent and WTI. WTI even rose above Brent for a few days. Despite the pause this week, however, risks remain on the upside given China’s reopening and the EU’s continued efforts to embargo Russian oil.

For its part, bitcoin is just about even on the week, trading around the $30,000 mark as of writing. Its the seventh consecutive week of historic declines. Without any real bullish catalysts, crypto investors’ nerves may be tested for some time to come. 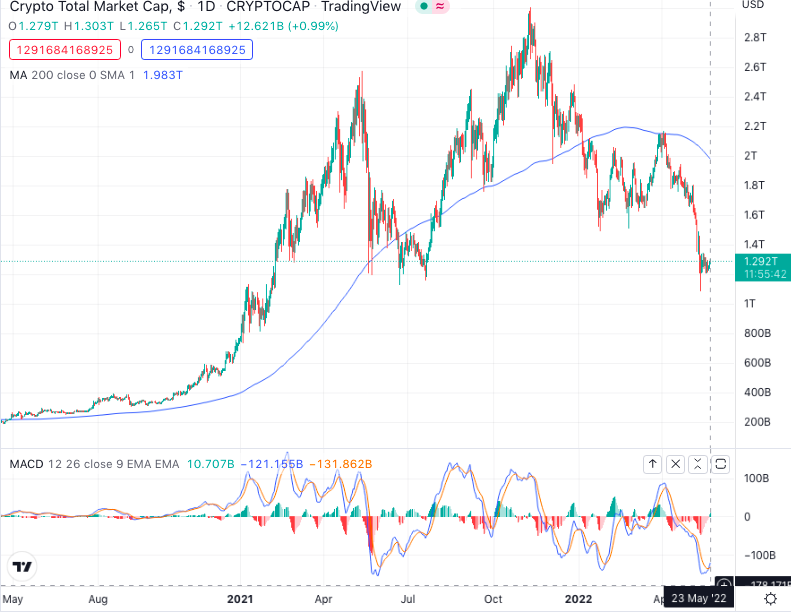 The market capitalisation of crypto has slumped to just $1.3trn, from nearly $3trn in November. On May 18th bitcoin traded at around $29,000, a mere 40% of its all-time high in November; the price of ether, another cryptocurrency, has collapsed just as spectacularly. Six months ago Coinbase, an exchange and the leading crypto-industry stock, was worth $79bn. Now it is valued at just $14bn, and the firm is “reassessing its headcount needs”.  – Economist

The dollar juggernaut rolls on. The U.S. currency has rocketed to a near three-year high versus the euro, a 10-month high against the yen and an 11-year peak versus the Aussie. This month alone it’s added 2.5% against six currency peers. Economic indicators are reinforcing the U.S growth engine’s outperformance.

A lower dollar would trigger some  temporarily releases for the market outlook and  could be a signal to add gold positions. 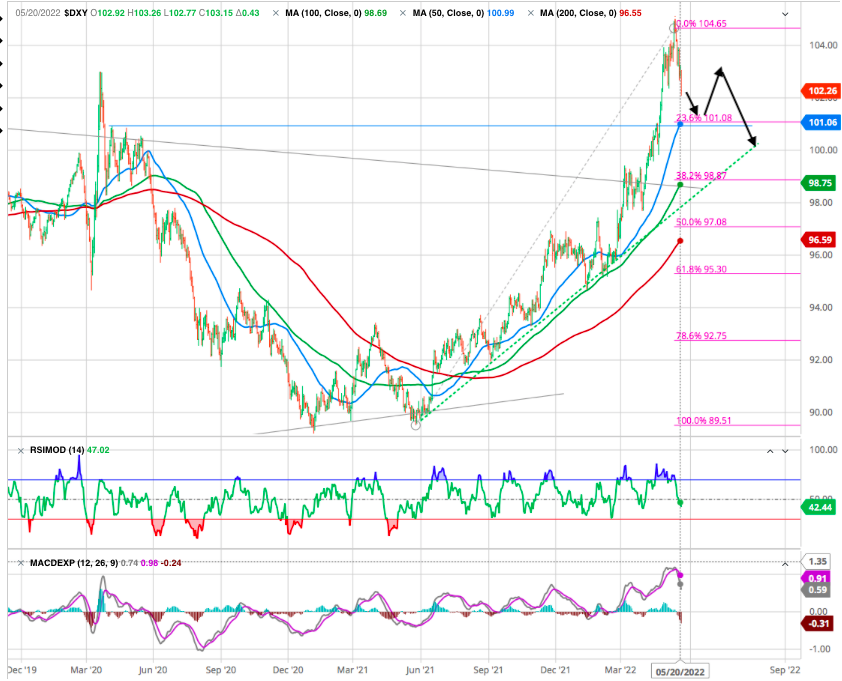 After forming a double bottom at around 89.40 in mid-2021, the index started to rise again, breaking through a series of intermediate resistances. The positive momentum subsequently managed to push the index on back above this key level, the index continuing to climb despite brief signs of momentum exhaustion. Short-term, the index briefly surpassed 2016’s high just shy of 104, and the RSI is moved into extremely overbought territory. Might a pause finally occur? If so, the 50-day SMA, corresponding to the 23.6 % fibo correction of the last up wave, currently at 101, should act as a support. Then we might test the uptrendline (dash green).

Our Currency, But Your Problem

China, Russia and increasingly Europe want an alternative reserve currency system. The problem is that immediate replacement of the dollar is difficult. 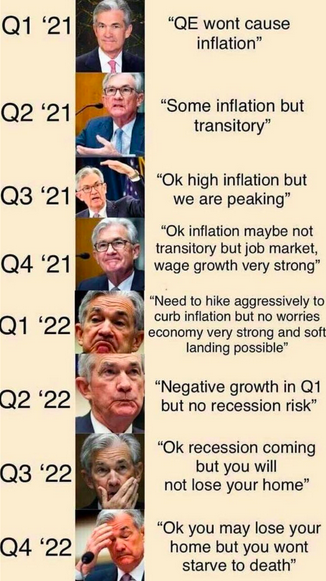 First, the euro, the yen, the yuan and the ruble are not realistic options. The euro’s long-term future and stability isn’t assured, while Japan’s economy remains trapped in two decades of torpor. The Chinese and Russian political and economic systems lack transparency, and the yuan isn’t fully convertible.

Second, the required change in infrastructure is daunting. Foreign-exchange markets where the US dollar is the currency of reference would have to be fundamentally restructured. Deep and liquid money markets to support a reserve currency can’t be conjured up overnight.

Third, most candidates are reluctant to take on the role of a global reserve currency because of tensions between national and global economy policy. The economist Robert Triffin pointed out that the country whose medium of exchange is the global reserve currency must meet external demand for foreign exchange. This necessitates running large trade deficits, requiring fundamental changes in the mercantilist policies of Germany, Japan and China.

This means that the US can continue to use its currency to help further its trade, financial and geopolitical aims, largely outside the strictures of international laws and institutions and without the need for messy, unpredictable military campaigns. As John Connally Jr., Richard Nixon’s Treasury secretary, put it in 1971: The dollar is “our currency, but your problem.”

A recent study by Gavekal, points to the difficulties encountered by many countries in the face of the dollar’s appreciation could tip us into a new international liquidity crisis. Indeed, the rise in commodity prices is forcing many of them to dip into their dollar reserves to finance their energy resources purchases.

Proof of this shortage of dollars: an item in the accounts of the US Federal Reserve called “securities held on deposit for foreign and international official accounts” shows a sharp drop in the amounts held. These are U.S. dollar assets held at the Fed by non-US central banks as foreign exchange reserves.

Over the past 50 years, most financial crises have occurred when these assets held at the Fed were down year over year (see chart below). 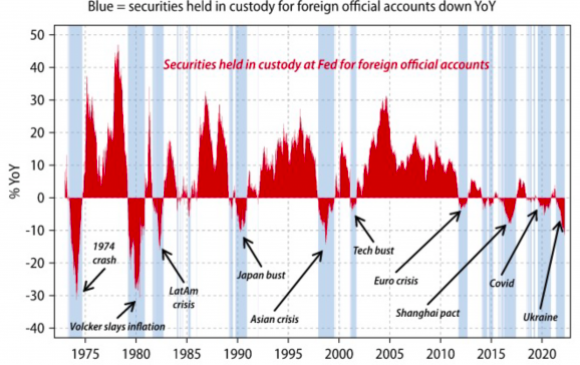 Most of these international liquidity crises have involved the failure of a large bank, a very large corporation or a sovereign state. In the past, the Federal Reserve has intervened in every case, usually by lowering rates or flooding the markets with liquidity.

But can the Fed afford to do so this time?

The euro has regained some ground against the dollar, at USD 1.0562. The European currency is trading at CHF 1.0286 and GBP 0.8463. The comments of some ECB members in favor of a more or less pronounced monetary tightening as early as July have weighed in the balance. Moreover, Christine Lagarde reportedly asked some members of the central bank’s executive board, including its chief economist Philip Lane, to “talk less and listen more” to the comments of central bankers from each member state.

Given the significant long-term economic uncertainty, the rush of investors to the global safe haven currency is not surprising. The other two “safe havens”, the Swiss franc and the yen, have disappointed of late. Even the previously strong currencies of commodity-exporting countries such as Canada, Australia and Norway have seen the winds of change blowing against them in the past month.