MARKETSCOPE : Blood In The Street 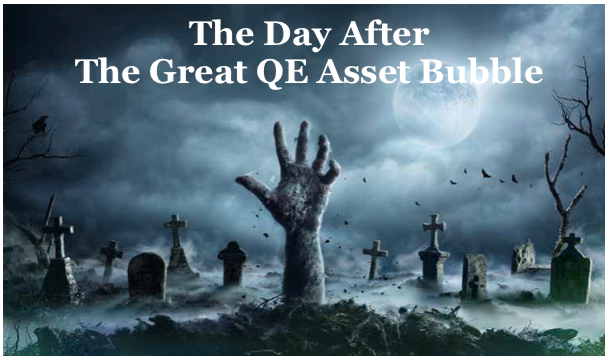 If you missed last week’s market action, it wouldn’t matter much. Risk assets surged higher at the beginning of the week, driven by belief in an imminent Federal Reserve pivot (toward cheaper money), and then themselves pivoted lower as hopes for rate cuts receded. The lasting lesson is that it really matters whether and when the Fed turns. 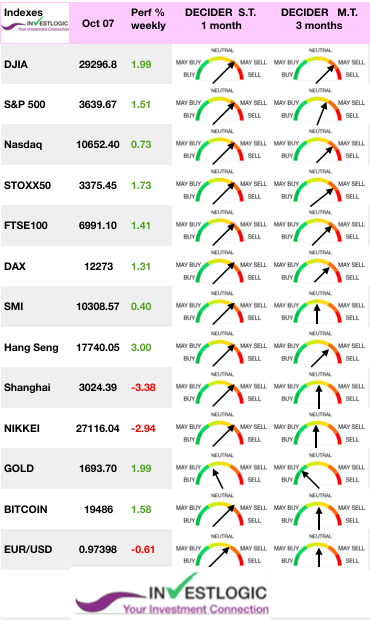 The week started out with a bang, with a market rally of more than 6% in two days. Stocks bounced off nearly two-year lows on Monday and Tuesday, with the S&P 500 rising 5.6%, its best two-day move since 2020. But markets plunged Friday after the latest government data showed a hot U.S. labor market that likely ends any doubt that the Federal Reserve will maintain its aggressive policy of raising interest rates. Nonfarm payrolls increased 263,000 in September after a 315,000 gain in August, and the unemployment rate unexpectedly dropped to 3.5%, matching a 50-year low. Another case of good news is bad news. If the economy holds up, the Fed will probably have to tighten its monetary policy even more. And investors don’t like that at all.

It’s hard to see that unemployment, on any sensible measure, could force the Fed to abandon rising rates at a time when inflation remains stubbornly untamed. The labor market matters most for inflation because of its effect on wages.

Investors are now evolving in a world where monetary policies take precedence over economic policies, particularly in the United States. Good economic news is now synonymous with a contraction in equity markets. And if their was hope for a little respite this week, we would advise  to stay cautious :Risk aversion and volatility should nevertheless persist, especially since major data on inflation are expected next Wednesday in the United States and especially with quarterly earnings releases.

Over $930 billion was wiped out from the US stock market Friday….

Friday’s selloff was brutal. As shown, the MACD signal remains intact but was weakened considerably, and the market is approaching short-term oversold conditions. Additional selling should occur early this week. 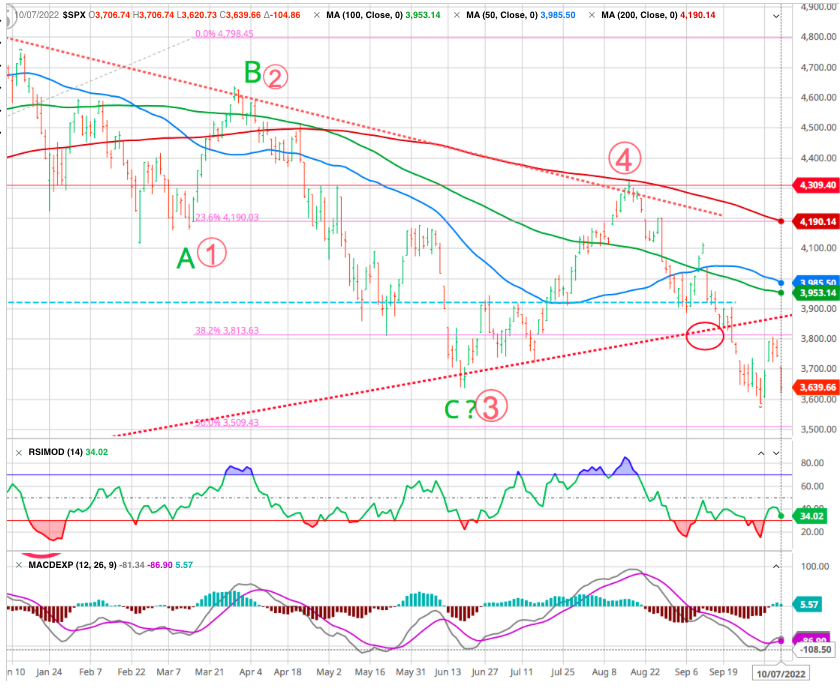 The downside risk is prevalent, as the Fed policy is increasing the risk of a recession, which will slow earnings growth. Such is a bad combination for stock prices as we head into 2023.

As to the fundamentals, history suggests that the rapid rises in the dollar, interest rates and oil prices over the past couple of years represent a uniquely bearish trifecta that will likely have a very negative effect on earnings over the next year or so.

We previously noted   -See our ABS matrix at the bottom of the last week published “What Are the charts Telling Us ?” – following  the high correlation between the ISM Manufacturing Index and corporate earnings. With the latest release of the ISM Index, the economic backdrop continues to deteriorate, suggesting earnings growth rates will decline further. 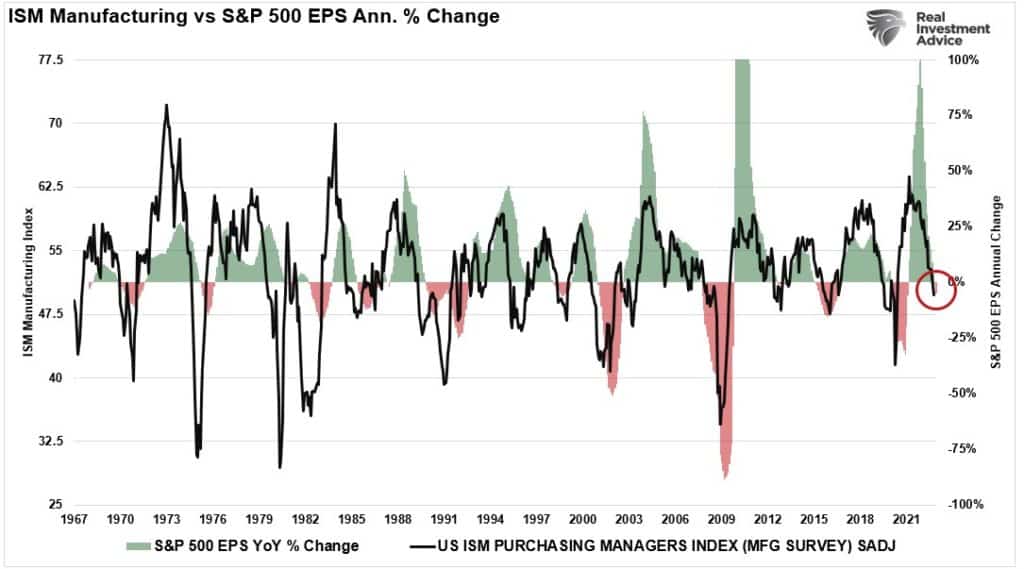 Analysts and investors are not looking for bullish numbers that can give the overall market a boost, with expectations for earnings per share growth consistently coming down into reporting season and an overall sense that the broader market will react badly.

What does that mean for stocks? 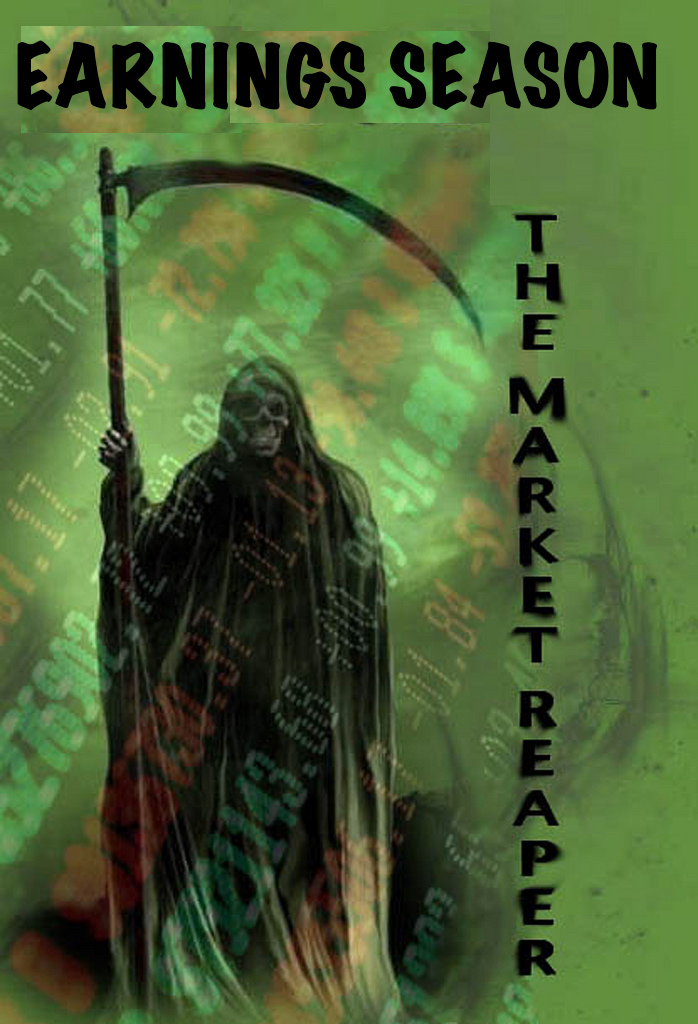 According to the latest MLIV Pulse survey of investors, more than 60% believe this earnings season will push the S&P 500 lower.  The BlackRock Investment Institute said it thinks earnings estimates still look “optimistic.” It remains underweight U.S. equities “valuations have not come down enough to reflect weaker earnings prospects.”

Long-term investors should thus have time to build long positions into weakness and volatility during the quarters ahead.

From a perspective of events that could lead to a continued decline and bottom at the end of October, a better-than-feared earnings season could be one such event. Whether a late October low will be the bottom or a short-term low is yet to be seen, but given how high valuations are, more work will need to be done for the bottom to be put in place.

Long-term technicals, notably momentum, appear to confirm this analysis. And bearish fundamentals paired with bearish technicals may simply be an effective way of defining a bear market (better at least than the arbitrary 20% rule).

The bear market of 2022 still has further to run based on historical trends and valuations versus interest rates. The 2022 S&P 500 continues to trace bear markets of 1937, 2000, and 2008, which is more an indication of the ebb and flow of human nature than past and future events. 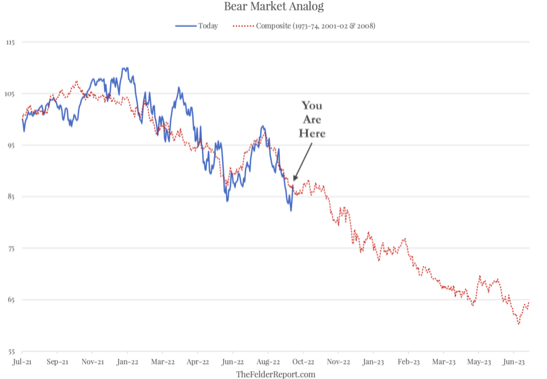 We showed previously the 2008 analog the markets continue to follow this year. While we are not suggesting the next “Lehman moment” is about to arrive, the lesson is that even during bear markets, there are market rallies that can be sold into.

Given that we are now in a bear market (however you choose to define it), history suggests we may only be about halfway through the process.

There are plenty of reasons – from earnings to liquidity to a strong dollar – to distrust a move higher in equities.  Any market rally remains another “opportunity to sell stocks” as the Fed remains on the offense of fighting inflation. 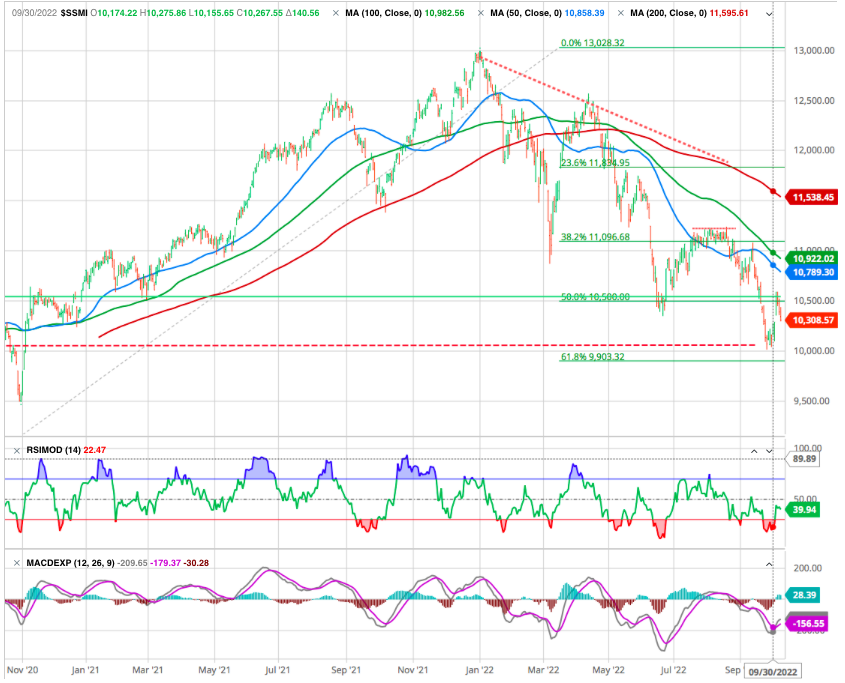 OPEC+ announcements provided significant support to oil prices. The enlarged cartel decided to reduce its production by 2 million barrels per day, while the market was expecting a contraction of one million barrels per day. This reduction in supply is obviously to the detriment of oil consuming countries such as Europe and the United States. North Sea Brent is trading around USD 95 while US WTI is trading at USD 89 per barrel. 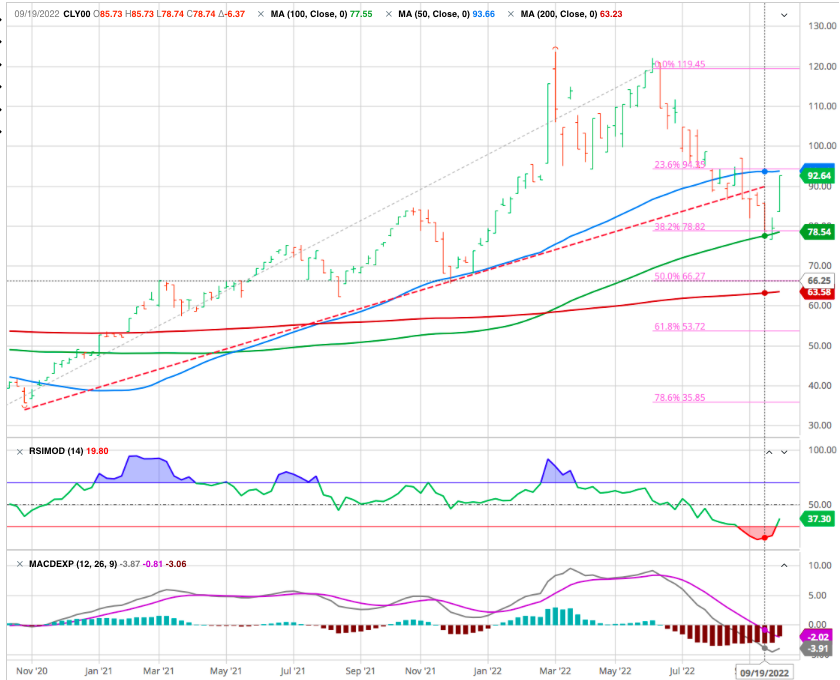 The Energy  has been the clear leader since the beginning of the year, clearly outperforming the S&P500.

The break below the recent low at 85.7 paved the way for a decline towards the next support at 78.5. Since then, a relief rally is underway and the price is approaching the 50-day SMA, a past support that has become a resistance.

Bitcoin is starting October on the same track as previous weeks, still sailing around $19,500. A low volatility that indicates the mistrust, the wait-and-see attitude and the observation of individual, professional and institutional investors, while waiting to see more clearly in a still very tense macroeconomic context. The ether, the second crypto-currency of the market in terms of capitalization, also fails to attract capital despite the success of its merger that took place in mid-September.

Traders hoping that Pivot (unlike Godot in Samuel Beckett’s play) would eventually arrive.

It’s hard to see that unemployment, on any sensible measure, could force the Fed to abandon rising rates at a time when inflation remains stubbornly untamed. The labor market matters most for inflation because of its effect on wages.

But most importantly, hopes of a pivot — which is defined increasingly elastically these days — have been overdone all year. History’s clear pivots (after the Long-Term Capital Management crisis in 1998; in 2008 as the credit crisis grew extreme; and in the desperate hours of the Covid shutdown in March 2020) have been driven by extreme events, and not by deteriorating macro numbers. And in general, a pivot is not exactly a consummation devoutly to be wished. Changes in the macro lead to changes in policy, but both tend to be gradual.

The year-over-year growth rate in the US money supply moved down in August for the 12th straight month. At 4.1%, it’s now below the historical average of 7.2% since 1959. There’s more work to be done but this is moving in the right direction if the goal is to break the back of inflation. 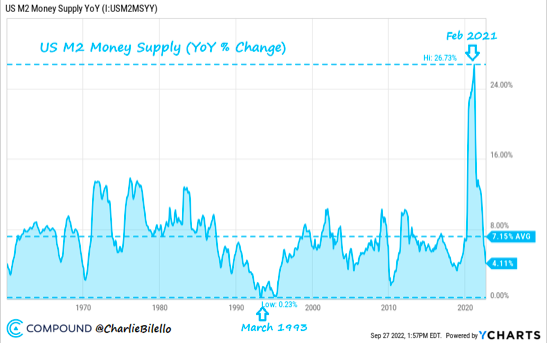 The infamous “Powell Pivot” of late 2018, when the Fed was bullied into changing course by a savage December stock selloff, may be most to blame. It fostered the impression that this Fed would turn on a dime. That earlier pivot has made it harder for the Fed to convince markets of its intentions, and may well mean that it has to hike more than it wishes just to prove itself.

There is a final problem with betting on a pivot, which is that it makes one less likely. Higher equity valuations contribute to an easing in financial conditions. The Fed is hoping that it can rein in inflation via the means of tighter financial conditions. So each little burst of optimism makes it harder for the central bank to move.

This guidance from Matt Maley of Miller Tabak is sensible:

If (repeat, IF) the Fed does indeed pivot, they won’t do it in the way they did in late-2018/early-2019. It will be more behind the scenes than anything else. It will be more like what they did in September 2019 when the repo market froze up. They’ll provide some liquidity behind the scenes like they did back then… instead of coming out and telling us that they’ve become much more accommodative. In other words, if you have been bearish and you are now turning bullish you’re really betting that the Fed had been forced to pivot because something did indeed “break” and not something else like capitulation or any change in inflation.

Finally, as we have explained, history tells us there are two scenarios that would prompt the Fed to shift from tightening monetary policy back to easing again:

Since the beginning, We have consistently warned our subcribers and followers that the second scenario was far more likely.

In short, given massive government and corporate debt burdens and nosebleed valuations in many markets, we believed Fed tightening would cause problems long before inflation fell back to reasonable levels.

That wasn’t exactly a contrarian view back in March, but it certainly wasn’t consensus among Wall Street analysts or the financial media.

However, that has now changed. Suddenly, it seems everyone is expecting the same thing:

Now, to be clear, we still expect the Fed will cause a crisis that forces it to pivot. And history does suggest that this will be bullish for stocks and other risk assets.

However, we must admit it makes us a little nervous that this expectation – and its likely outcome – has become so popular.

When “everyone” expects the markets to do one thing, they often do another.

What that might mean in this case,we are not quite sure yet.

Perhaps a Fed pivot may not be the immediately bullish signal for markets it often has been in the past? Or maybe it will be positive for some stocks, sectors, and assets but less so for others this time?

BONUS  : Thoughts on Risk of Armageddon

The nuclear rhetoric is growing louder as Ukraine continues to make serious battlefield advances. The country’s forces have regained control of thousands of square miles of territory since the beginning of September, especially in the areas recently “annexed” by Russia. The developments are pushing Vladimir Putin into a difficult corner, where he must decide how to paint the war as a victory and means for negotiation, or double down on a strategy of increasingly dark destruction.

At this path of the Ukrainian conflict we estimate high the odds that Putin uses of a nuclear tactical weapon. What would therefore be the impact for the financial markets ?

Depending on your own answer, you would find the best strategy to invest, or not, into any market rally.