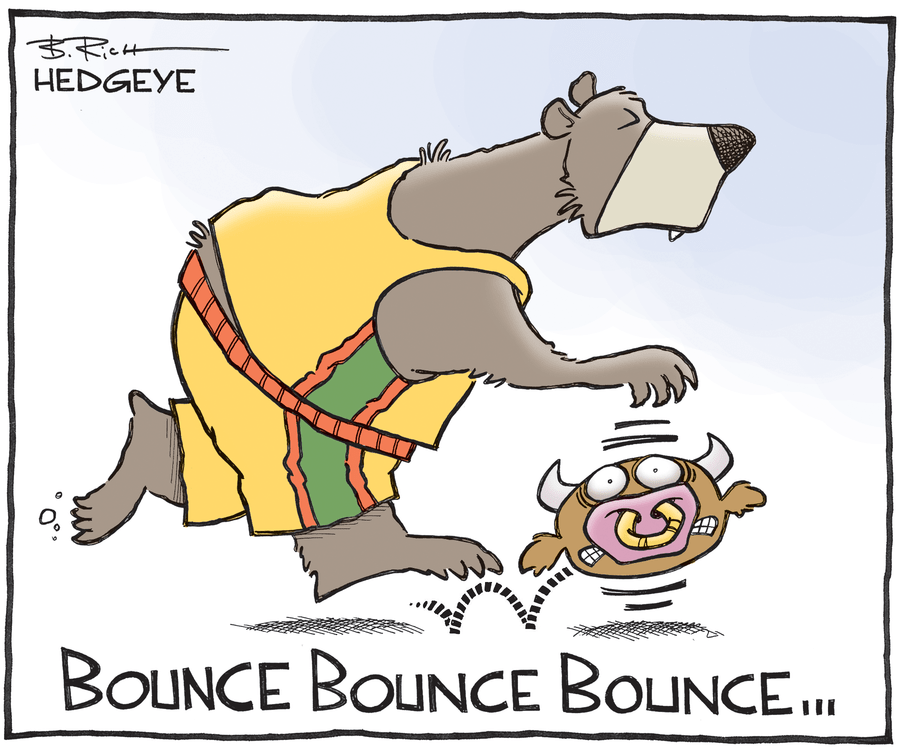 creaming to its highest levels in decades. Then around 9 AM, a news article from the Wall Street Journal suggested the Fed may begin to debate the pace of future rate hikes. 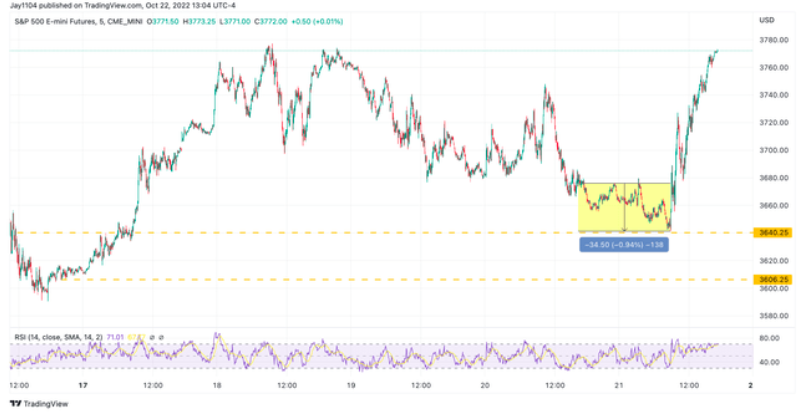 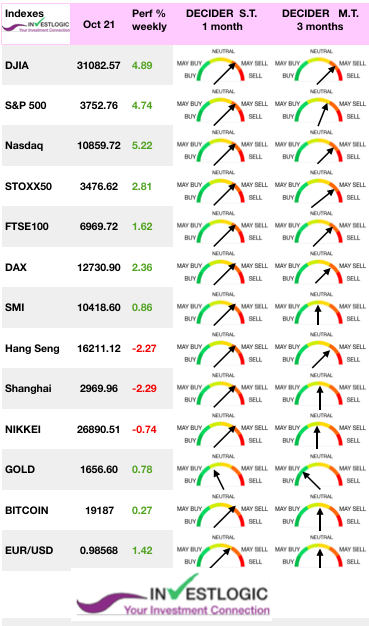 At that point, the S&P 500 futures were down nearly 1% and were sitting at a critical level of support. If that support had been broken, it would have probably sent the S&P 500 futures down to around 3,600. But then, at 8:52 AM, everything reversed hard from the “Fed Whisperer,” Nick Timaros of the WSJ, the Fed may be considering slowing the pace of rate hikes in December. Such was a welcome relief for the beaten-up bulls, and stocks rallied sharply to close the week.

Beyond the headline, the article stated nothing new, even noting comments made by Fed officials nearly a month ago. Anyone that had listened to Fed officials over the past month shouldn’t have been surprised.

Energy shares outperformed within the S&P 500, as oil prices proved resilient despite the announcement of a release from the U.S. Strategic Petroleum Reserve. Trading remained active and volatile, due in part to the expiration of USD 2 trillion in options contracts on Friday.

Shares in Europe rose on the resignation of UK Prime Minister Liz Truss and the scrapping of her fiscal policies. UK very Bad Trip is undermining the credibility of the country’s political class at a time when it is facing a major crisis.

China’s stock markets recorded a weekly loss after Beijing delayed releasing key economic data without explanation. Stocks in Hong Kong and Shanghai closed out Monday’s session down 6.4% and 2%, respectively, amid a slew of concerns over the country’s economy. While third-quarter GDP growth beat expectations at 3.9%, the figure was way below China’s official full-year target of 5.5%, which is already its lowest goal in three decades.

Markets erratic movements are likely to continue in the coming sessions, as the earnings season intensifies and the ECB and Fed monetary policy decisions approach.

MARKETS : The support held, and a relief rally may have begun

U.S. stocks could stage a near-term rally given oversold conditions. Even the slightest whisper of a potential Fed pivot was enough for equities to stage a rally.

It will be necessary for the market to rally some more next week and ideally rises above 3800 (38.5% fibo mark) to confirm another “bear market” rally is underway. 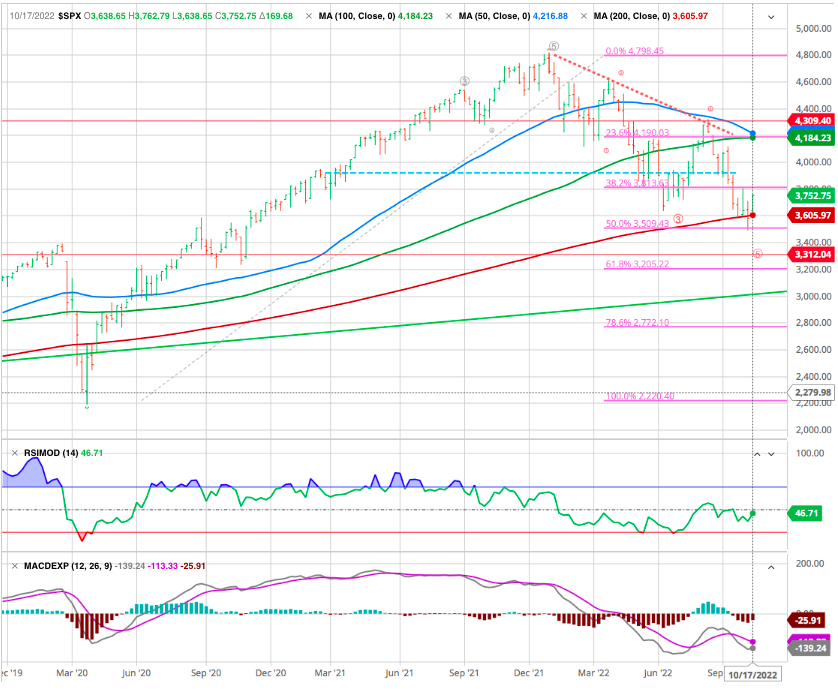 Furthermore, the positive divergences of the MACD and RSI indicators also support the short-term bullish outlook. 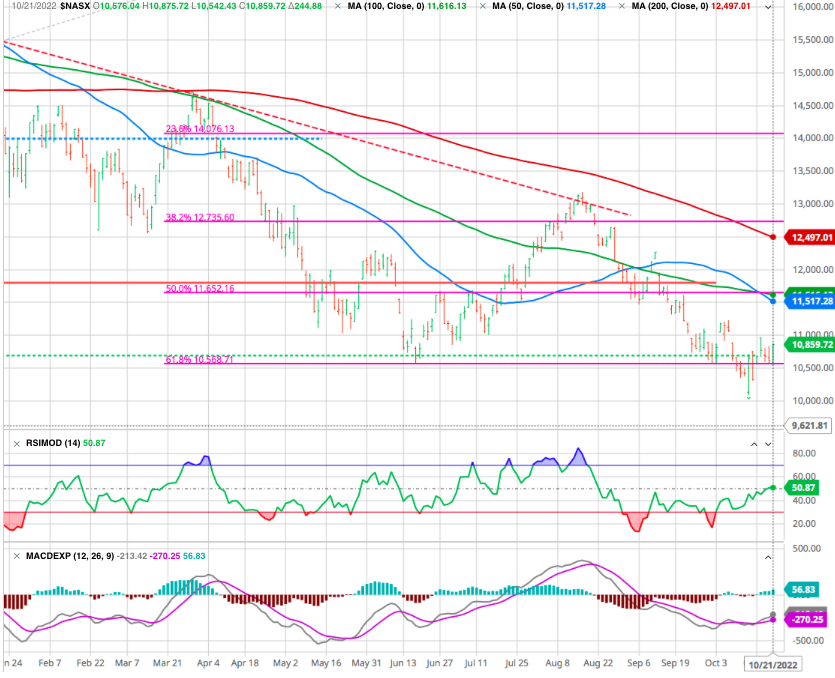 With the technical action of the market supporting a rally, October tends to mark lows as the seasonally strong period gets underway. 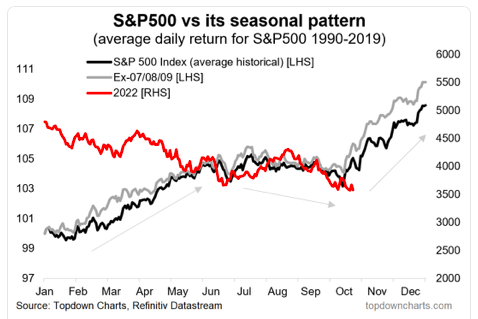 However the rally from the recent October market lows, will probably not mark the bear market’s end just yet. It is important not to mistake a rally from oversold conditions as a market bottom. There are still a tremendous number of headwinds that suggest we won’t see the final market lows until next year.

Given the character of this bear market to date – as well as the similarly worrisome signals from many of our other tools and indicators – it’s another great reason to remain conservative for now. Investors should remain cautious until the economy shows signs of sustained improvement.

It add fuel for the next leg of the tactical rally in stocks until we get full capitulation on 2023 earnings estimates, something we think may take a few more months. On when the “full capitulation” on EPS estimates may take place,

Michael Hartnett of BofA put it, the survey “screams capitulation.” The only, vital qualification to add is that investors haven’t yet sold off their stocks, so when push comes to shove in the market, they still haven’t capitulated.

Out of several fund managers’ opinions, in charts, the key is this one: They’re more bearish about stocks than at any time since the survey started (remarkably even including 2008), but somehow flows into equities are still positive: 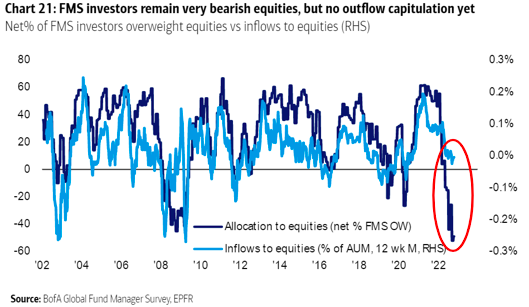 On the other hand the Coppock Curve still working on a major bottom signal.

The current reading is the lowest since the 2007-09 bear market, but this longer term look shows us that the Coppock Curve is still far from showing us one of those really historic bottoming indications.

We are not guaranteed to get one of those; the market actually could turn up now, and turn up the Coppock Curve before it reaches another one of those juicy oversold lows.  But such an upturn is going to be hard to accomplish from the current price level for the DJIA.
As BofA noted : we are only part-way through the complete economic downturn cycle (also see our ABS Matrix) 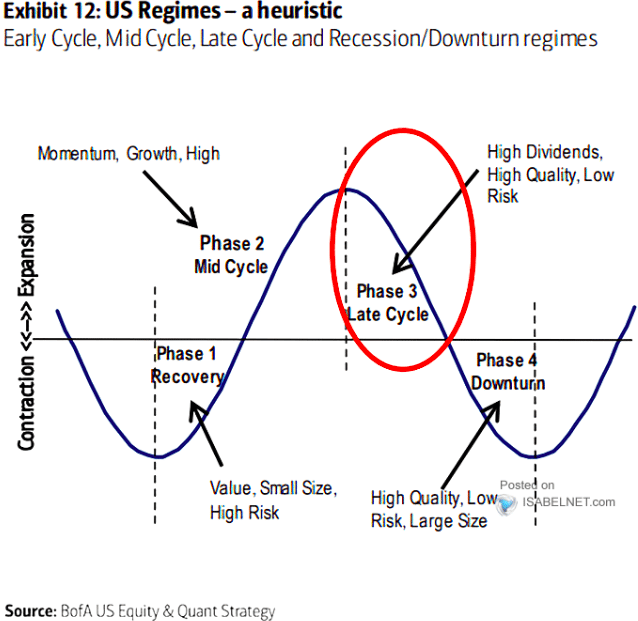 Given the economic downturn and earnings recession phase, the market bottom will not occur until 2023. As we move into 2023, the markets will have much with which to contend.

With valuations still elevated by many measures, earnings are weakening, and profit margins under pressure from inflation, a repricing risk of equities remains.

Great numbers from Netflix (NFLX) sent the stock up 13% after the bell on Tuesday as investors applauded the streamer’s return to growth. The company added 2.41M customers in the third quarter. Our recommendation in “what are the charts telling Us ?” was timely. So was the financial and energy sectors. Big banks are coming out with better-than-expected earnings results, providing another constructive catalyst for stocks to move higher in the near term.

While the near-term technical image has improved substantially, it’s still all about the Fed and earnings going into November.

Earnings reports will pour in at warp speed next week with every sector sending in heavyweights to spill numbers. The blockbuster reports from Apple, Amazon, and Microsoft are being given the best chance to give investors a positive break from the unrelenting inflation and interest rate news cycle. Meanwhile, Intel’s  spinoff of Mobileye Global hrough an IPO is also expected to generate plenty of buzz and Elon Musk’s acquisition of Twitter is closing on its deadline date October 28 with plenty of drama still in the mix.

The dollar index has been consolidating around the 110 to 114 region since the end of September. Additionally, the RSI has been steadily rising, suggesting the next significant move in the dollar could be higher. 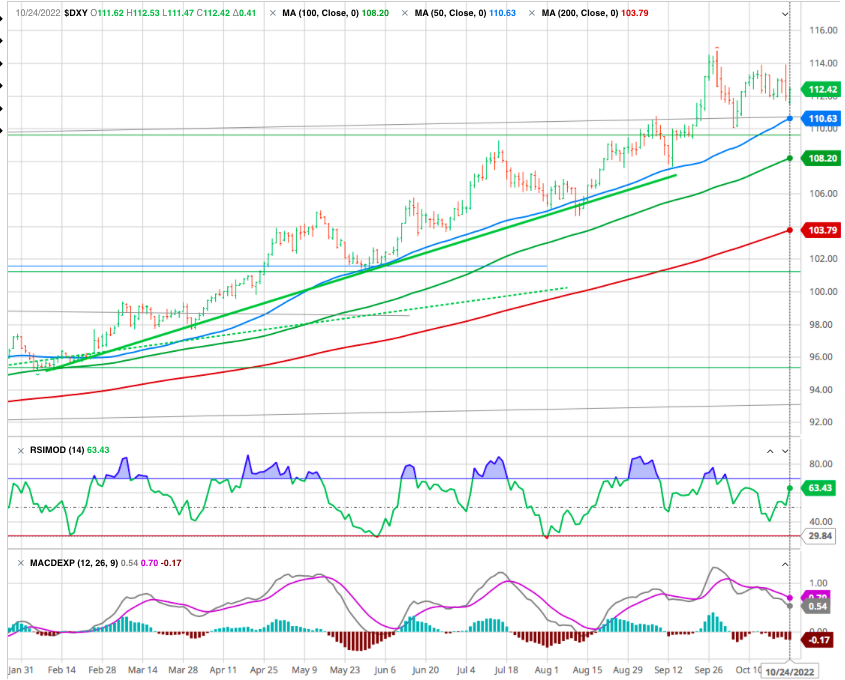 We don’t expect the current decline in the dollar will persist and is but a short-term response to the possibility of a shorter Chinese quarantine. Bearish bets on Asian currencies continued in light of the consistently ultra-hawkish Federal Reserve, forcing other central banks to keep up. The dollar crossed the dramatic 150 level against the yen for the first time since August 1990

We were bullish through out end of October 2021. But the data changed. Our proprietary signals changed. And when the data/signals change, we change too alongside of it. Our post on October 21, 2021 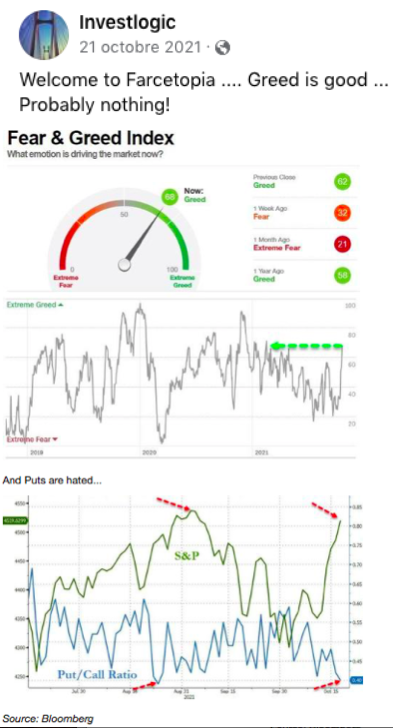 Just look charts and our identified levels  we shall keep going and give you our best information.

Thanks and Happy trades