Ladies and Gentlemen … the Fed 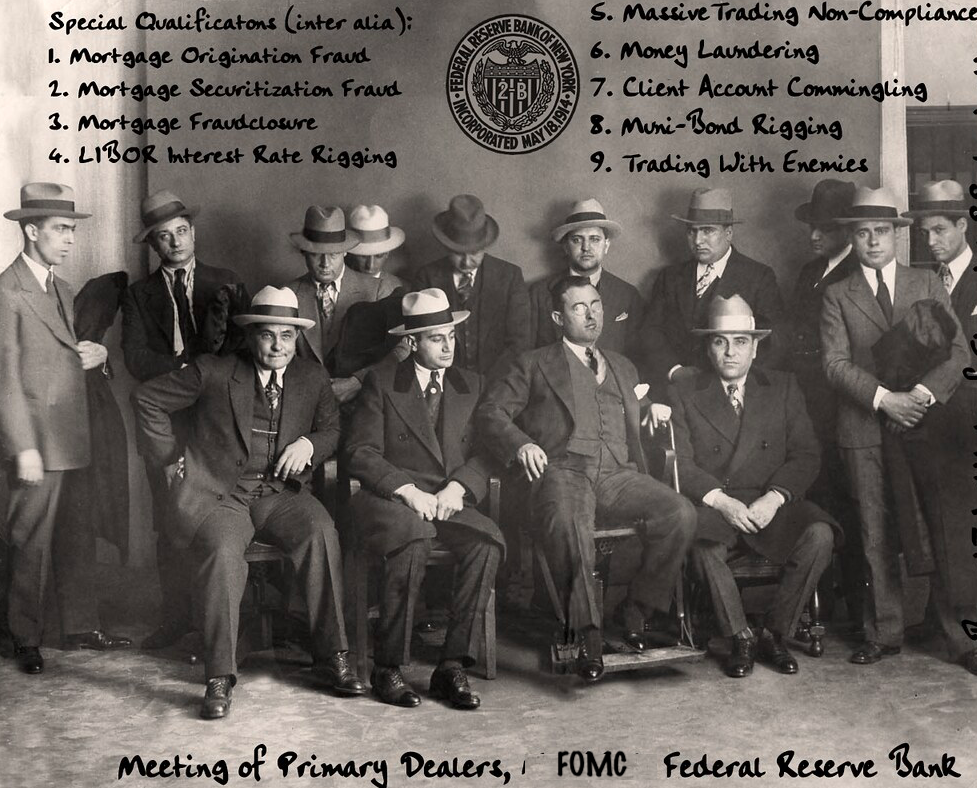 Financial markets had another week of growth on the back of reassuring speeches and good earnings. While Wednesday’s rate hike, already anticipated by the market, no longer seems to affect the mood of investors; the few reassuring words of Jerome Powell on a possible easing of the Fed’s policy, gave a new glimmer of hope. The bulls’ camp seems to be satisfied with this anticipation of a 6 to 12 month post-recession rebound – which is a bit premature at this stage – while the bears’ camp is hoping that this is just another FOMO (Fear of Missing Out) movement. Future will tell who is right.

US stocks posted solid gains despite another 75-basis-point rate hike from the Fed and news that the US economy contracted at a 0.9% annual rate in the second quarter. It seems that “bad news is good news” again as investors have been decreasing rate hikes expectations which leads to Growth stocks outperforming value stocks again.

Confirmation that GDP contracted over the first two quarters of the year also fueled demand for short- and intermediate-term Treasuries. High yield bond market sentiment improved after the Fed meeting.

This was one of the busiest weeks of the year in terms of corporate results, and it included many large caps. They were generally above expectations, especially for the stars of the stock market, which weigh heavily on indexes. The outlook is also encouraging, despite the pressure on margins, which should remain present in the next quarter.

Shares in Europe gained ground, boosted by data showing that the eurozone economy expanded at a higher-than-expected rate of 0.7% in the second quarter. Markets largely shrugged off concerns about rising natural gas prices due to reduced Russian supply. Meanwhile, an early estimate of euro area inflation came in above expectations, hitting 8.9% in July, driven by food and energy prices.

If we had to remember only one thing, it is that the slackening of the US economy was rather well received by investors… because they saw it as a valid reason for the Fed to slow down its rate hikes. We therefore remain in a situation where central banks are seeking to curb inflation without (over)-disturbing the economic dynamic or sinking into stagflation. A real balancing act.

Stocks might have hit “A” bottom near term. However, it is not likely “THE” bottom. The reason is that while the market is rallying because of the potential for a Fed pause, as noted above, history suggests stocks haven’t hit “THE” bottom.

Bear markets always include fierce “bear-market rallies” when it appears that all the selling is over and that it’s safe to take risks once more. They’re great ways to lure people in to losing more money. There’s a good chance that this will prove to be another one. But it’s now quite a surge. More importantly, the bond market is also rallying.

This is the 4th rally attempt in the S&P 500 this year. But as you can see below, the previous 3 were followed by lower lows…

Last week was the best for the US stock market in more than two years. For the month as a whole, the S&P 500 gained 9.22%, with growth stocks beating value, while MSCI’s All-Country World index excluding the US gained 3.42%. As this would appear to show returning risk appetite, it’s odd that emerging markets didn’t join in, with MSCI’s benchmark index down slightly for the month.

DB strategist Karthik Nagalingam writes, 29 of the 38 major assets tracked by the bank started the second half of the year with a monthly gain in July – the highest percentage since November 2020 when Covid vaccines were first approved.

US Sector performances over July

The market finally gained a decent rally. The break above the 50-dma and the declining trend channel gave the bulls the signal to jump back into stocks. While much of the rally was short-covering, the market did push into the upper resistance of the longer-term downtrend channel.
We also suggested the market needed to pull back and successfully retest the 50-dma, which would turn that previous resistance into support. That retest occurred on Tuesday in anticipation of the FOMC meeting. 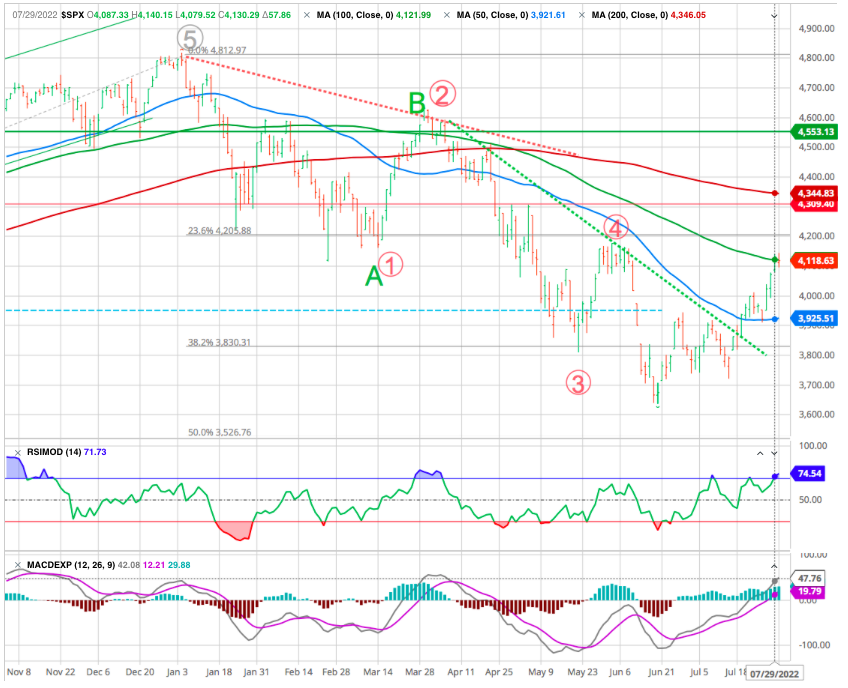 Now the 100 DMA is acting as the next strong resistance. The next two weeks could be crucial as this will be the busiest part of this earnings season.

The market is taking a lot of comfort in the mixed earnings season because the concern was that it was not going to be mixed, that it would be more uniformly negative.

EARNINGS : This Could Be the ‘Next Shoe to Drop’ for Stocks

Despite the big drop in the markets this year, corporate profits have held up remarkably well.

These figures represent some of the slowest quarterly earnings growth in years outside of the COVID-19 shutdowns. But any growth in the current market environment is arguably positive.

This means that the decline in stock prices this year has been driven primarily by multiple “compressions.” The “P” (price) in the P/E ratio has fallen sharply while the “E” (earnings) has remained relatively stable.

Unfortunately, that may not be the case much longer. There is one potential caveat to this analysis, however.

U.S. consumer price inflation is currently much higher than it was in the late 1990s.

In fact, it’s higher than just about any time in history outside of the “stagflationary” 1970s. According to the U.S. Bureau of Economic Analysis, there were three separate “earnings recessions” in the 1970s:

Given that consumer price inflation is running above 9% by official measures, it’s possible earnings may fall less than expected this time as well.

However, even a more modest decline could trigger significant further downside in stocks.

Currently, markets are rallying in hopes the Fed will revert to its zero interest rate policy and quantitative easing. However, such is not likely the case as inflation is still running at the highest level in 40 years. While inflation will likely peak in the next couple of months, the decline will be slow initially. Such will likely keep the Federal Reserve focused on quelling inflation by slowing economic growth through higher rates.

Furthermore, the Fed is unlikely to reverse its balance sheet reduction program, particularly with both the stock and bond markets showing little signs of financial stress. The Fed is okay with declining asset prices, they are not okay with financial instability. As such, there is currently little reason for the Fed to reverse course from its inflation-fighting focus.

Eventually, we will likely work through the rest of the 2008 analog when that happens. 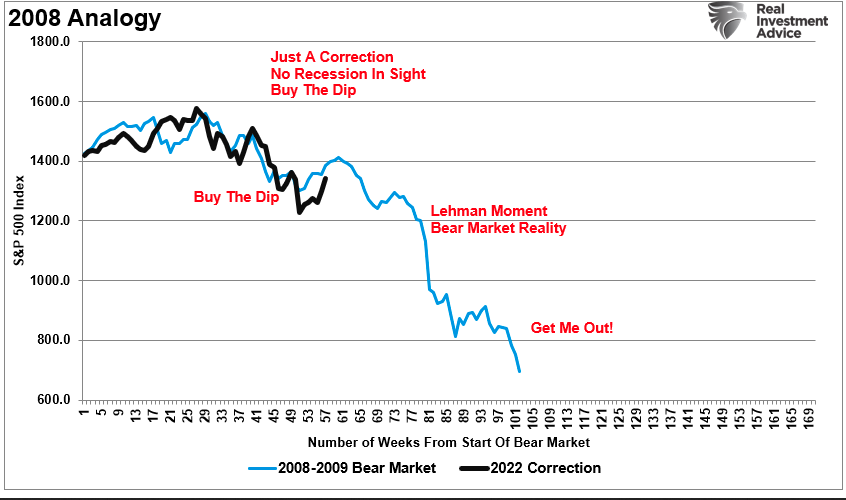 In precious metals, finally gold rebounded by 2.20% to USD 1760. Some renew interest in the old safe haven asset, could lead to sustanaible rebound, as noted last week. We remain long term positive. 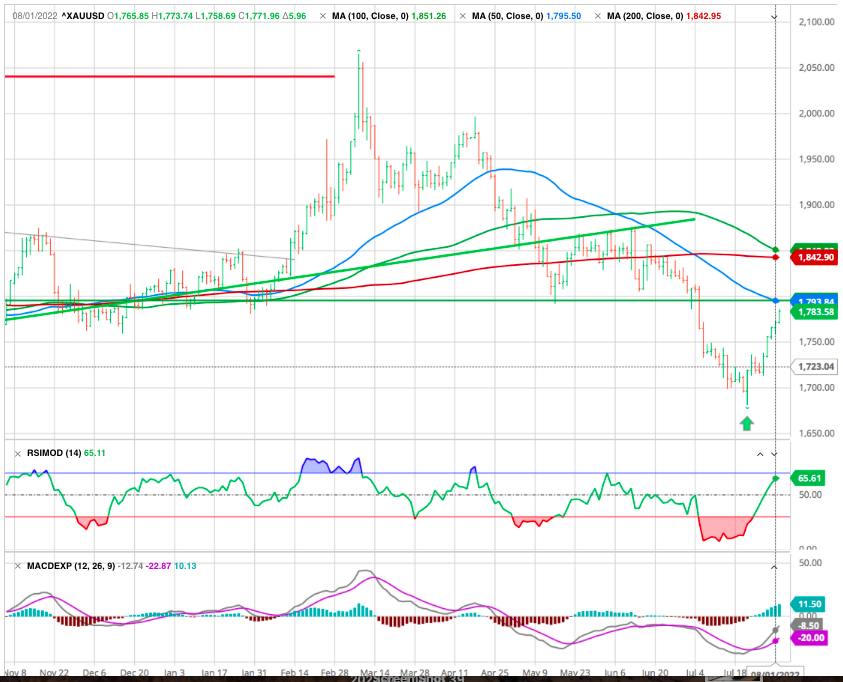 For the second week in a row, crypto-assets have continued their ascent in the wake of US stock market indexes. Bitcoin is back above $23,400 and ether is above $1,650 Caution remains the order of the day, however, as macroeconomic conditions are not really favorable for a definitive return of capital to risky assets. 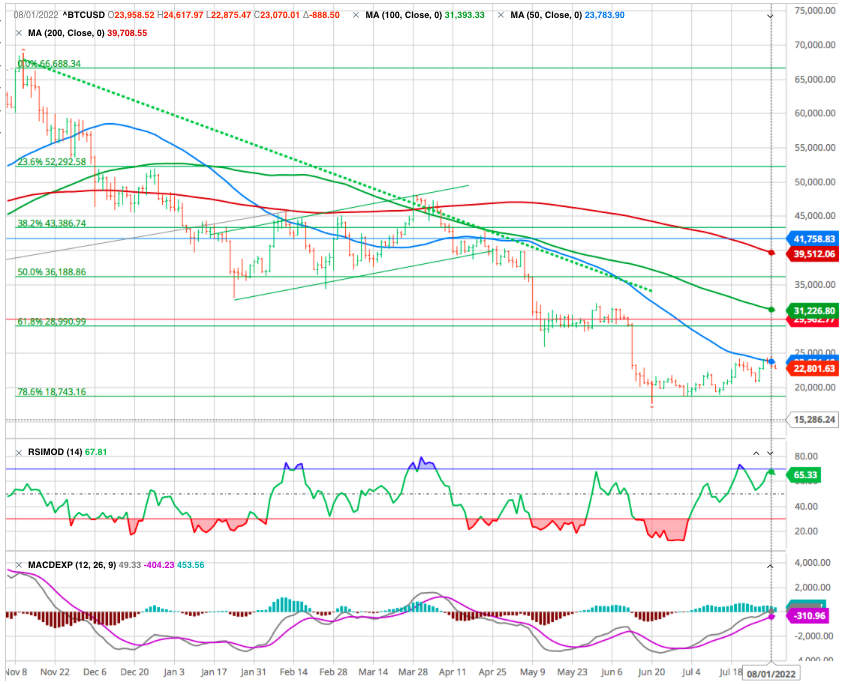 For this higher risk asset we think that the bottom has yet still to be confirmed and even though the risk on is back for some traders we doubt it will recover into a sustainable uptrend. The next strong resistance being the 100 DMA at 31200.

First, while the Federal Reserve is likely to slow the pace of rate hikes going forward, it is not yet planning to stop them entirely. The most optimistic estimates currently suggest the Fed is likely to hike rates at least two more times – in its September and November meetings — before stopping.

Second, the Fed has likely already raised rates higher than our highly indebted economy can tolerate. If that’s true, both the economy and the markets could continue to struggle even if the Fed stops hiking this year.

Finally, and perhaps most important, the Fed is planning to continue to unwind its massive balance sheet — through quantitative tightening (“QT”) — even once it stops raising rates.

QT is basically the opposite of quantitative easing (“QE”). In QE, the Fed essentially “printed” money and bought tens of billions of dollars’ worth of U.S. Treasury bonds and mortgage-backed securities (“MBS”) each month. In QT, it will allow tens of billions of dollars of these same bonds to “roll off” (or expire) from its balance sheet each month.

This program officially started in June, when the Fed began reducing its holdings by $47.5 billion per month. But it will ramp up to $95 billion per month, where it’s expected to stay for the next two to three years.

Why is this important? Because it was arguably QT, rather than excessive interest rate hikes, that triggered the crisis in late 2018. At a minimum, QT could exacerbate the earnings slowdown mentioned earlier, even if the Fed stops raising rates. At worst, it could trigger another crisis.

Ultimately when the Fed pauses, historically, the recession is beginning, not ending. below chart (from Lance Roberts). 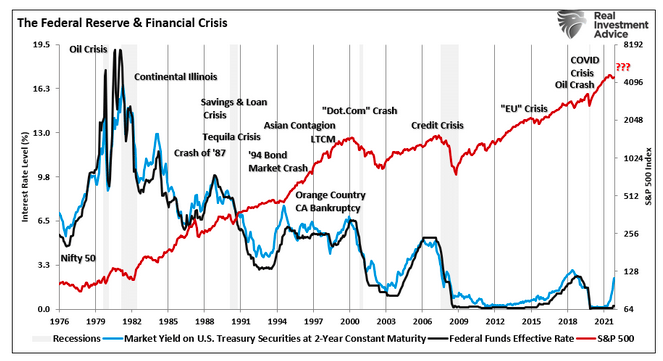 Interestingly, the market is now “Fighting The Fed,” hoping that Powell will halt rate hikes and begin to lower them despite the Fed’s dot plot, which suggests otherwise. 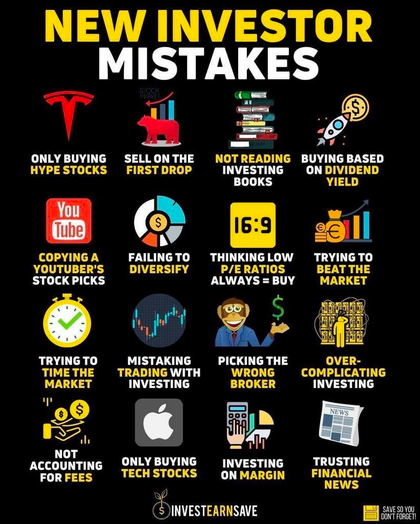