MARKETSCOPE : Back to Reality

US Rates : The Only Way is Up Baby 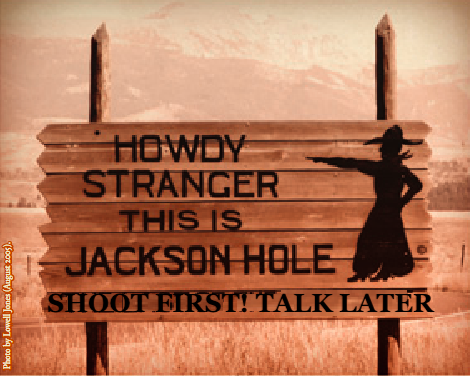 As the world grapples with accelerating inflationary pressures that threaten growth, Powell insisted that  rate hikes are still required to keep prices in check. We have gone from doing whatever it takes to keep the economy afloat to doing whatever it takes to slow it down, which is painful. Even if it means pushing interest rates into restrictive territory and thus pushing the economy into recession. 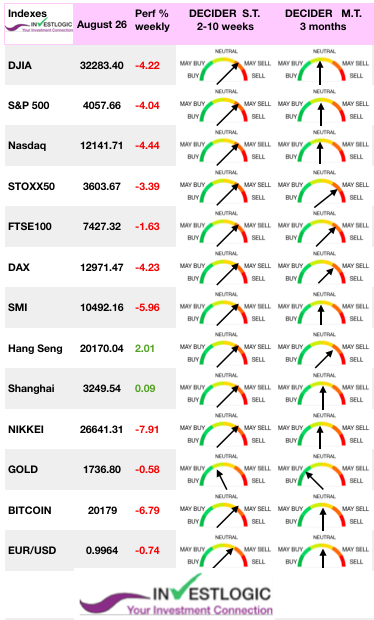 “Restoring price stability will take some time and is likely to require a sustained period of below-trend growth and softer labor market conditions,” he told the conference, adding that the road ahead would “bring some pain to households and businesses.” It’s a clear message that the central bank is willing to forego any economic gains made during the pandemic, and possibly a soft landing, in order to ensure that inflation doesn’t get out of control.

The threat of aggressive, Volcker-esque rate hikes tipped markets into … despair.  The markets seem to have taken the point.. Rather than rallying as they have done after Powell’s more upbeat press conferences, the reaction to his toughly worded speech at Jackson Hole was a significant sell off. All major averages slumped between 3%-4%, sending risk-off signals to other sectors and asset classes (Bitcoin fell below $20K for the first time since early July). Sentiment may remain dented this week.

The idea that this 2022 bear market will turn on a dime, as many investors have grown accustomed to since 2010, seems highly unlikely. Chair’s message was not the “pivot” the market was looking for and consequently fueled a sharp market sell-off on Friday.

The Fed is not likely to waver any time soon, and earnings could be negatively impacted if the economy slows as the Fed intends. It leaves this bear market cycle far from over or until the Fed changes its policy path.

The break of the 100-dma also sets the market up for a retest of the 50-dma this week. Given the sharp market sell-off on Friday, some follow-through selling early this week would be of no surprise. 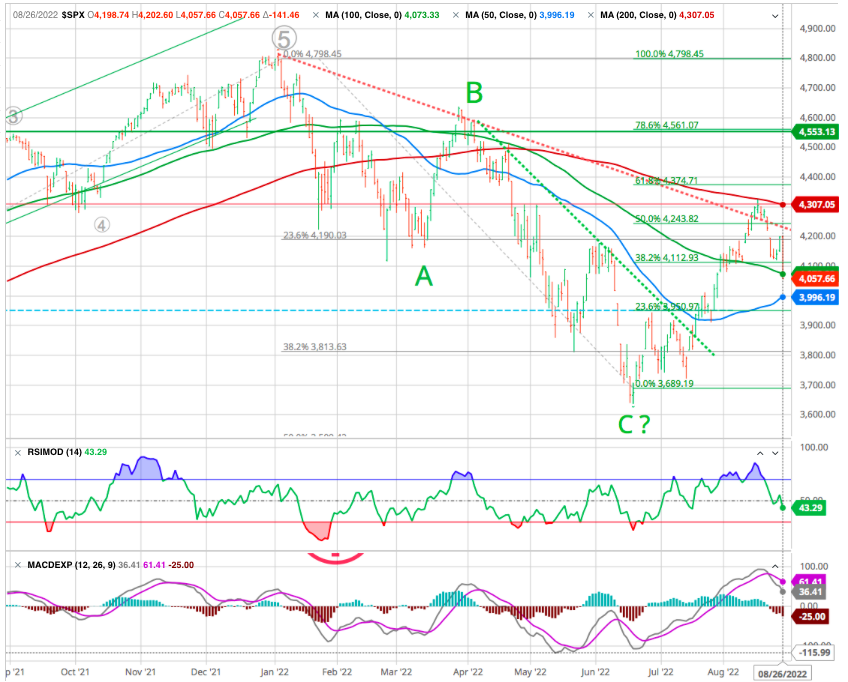 With the market failing a test of resistance at 4160ish, and with the MACD still on a “sell signal,” we continue to suggest selling any rallies for the time being.

That is also true for the other indexes and we should a minima retest the lows in the coming month 8also the 61.8 % retracement of the main uptrend. 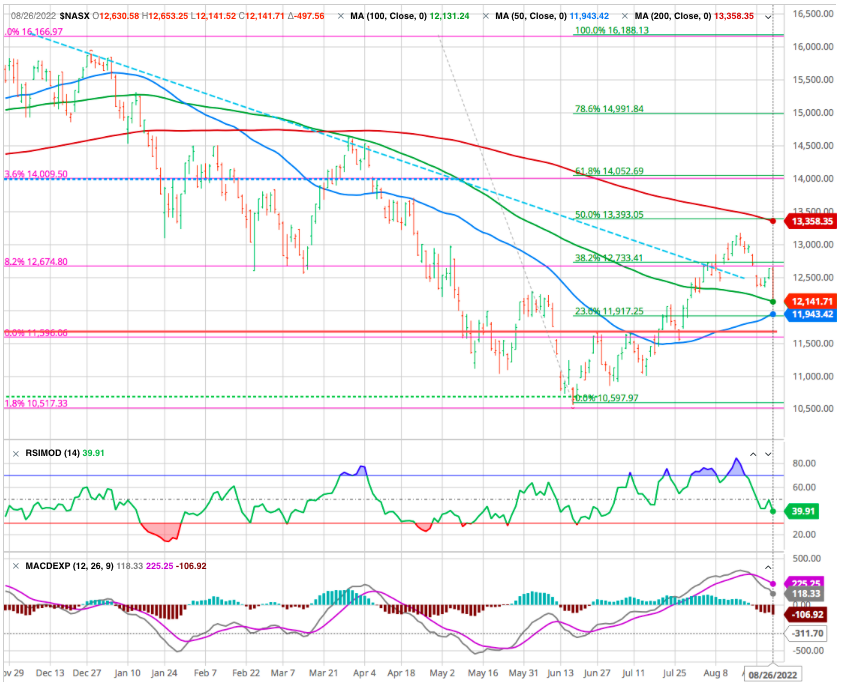 As well as for European and Swiss Markets 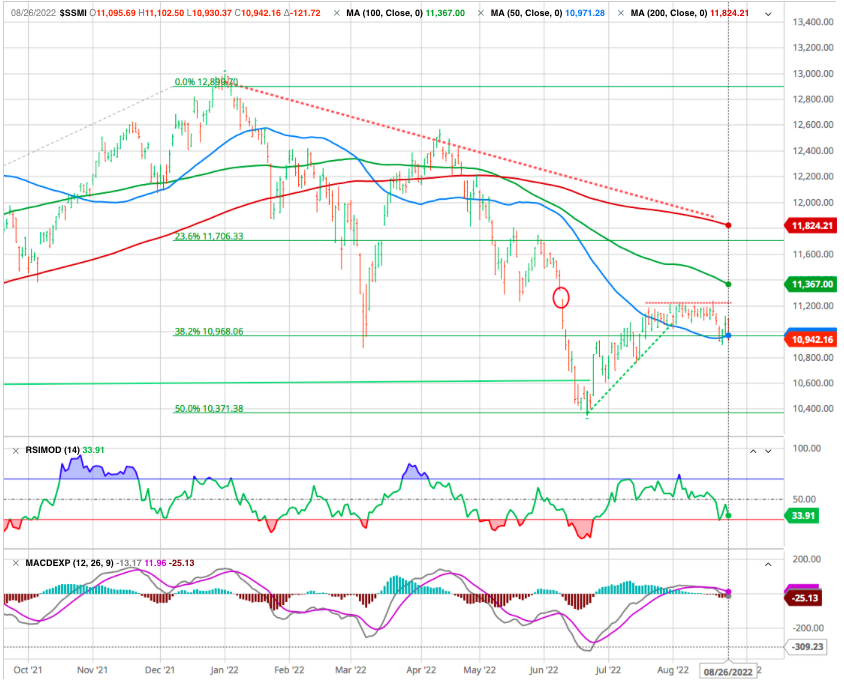 On August 24th – we distributed our largest “high conviction” warning trade alert. U.S. equities have been priced for an American economy on Mars or Venus, NOT Earth. Into this mess – we have a Fed that is expected to do $1T of QT over the next 12 months, NO way.

With the SPX  breaking down, history suggests most individual stocks are likely to make significant new lows as well. So, we suggest that most long-term investors should continue to be conservative for now.

At a minimum, that means holding plenty of extra cash, avoiding most high-risk and speculative assets, and sticking primarily with healthy assets in healthy markets and sectors if making new investments today.

Bitcoin has continued its downward trend from last week, falling more than 3% since Monday and hovering around $20,000 on the support. Watch out !

The energy crisis in Europe, combined with the Fed’s stance, pushed the euro below parity with the dollar at the start of the week. The euro eventually recovered to around USD 1.

Sovereign credit risk is on the rise in Europe – we have the ECB on September 8. The ECB has yet to pick its poison:

The chart below illustrates how broker estimates on the EUR/USD currency pair have evolved on a median basis.  It clearly illustrates how expectations have been continuously revised lower, as the rate differential, the risk-off mood, high energy prices and the war in Ukraine have weighed on the outlook for the euro. 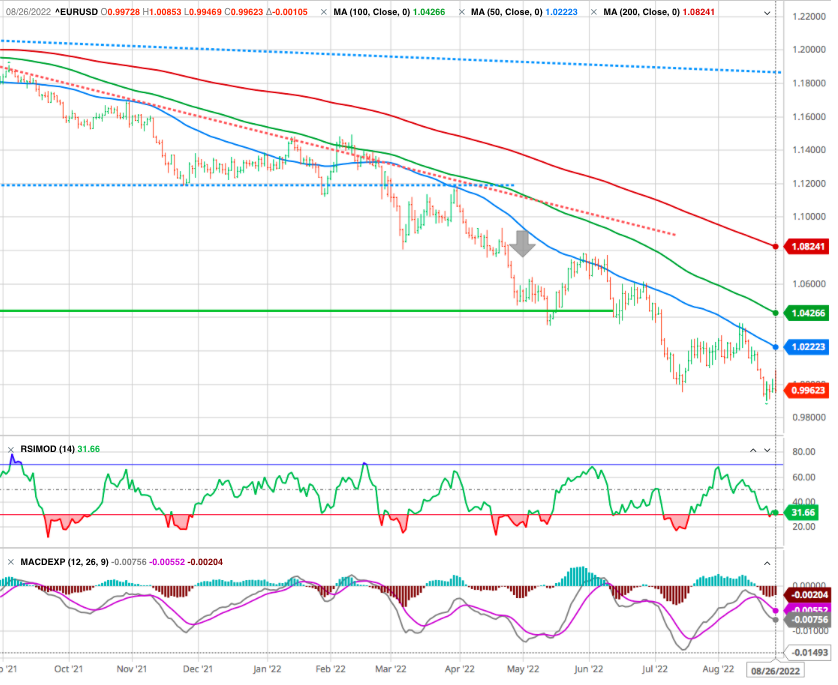 The US dollar is likely to remain strong against the euro, but brokers still continue to expect the single currency to appreciate against the greenback in the quarters to come, with the median target for Q3 currently at 1.05, 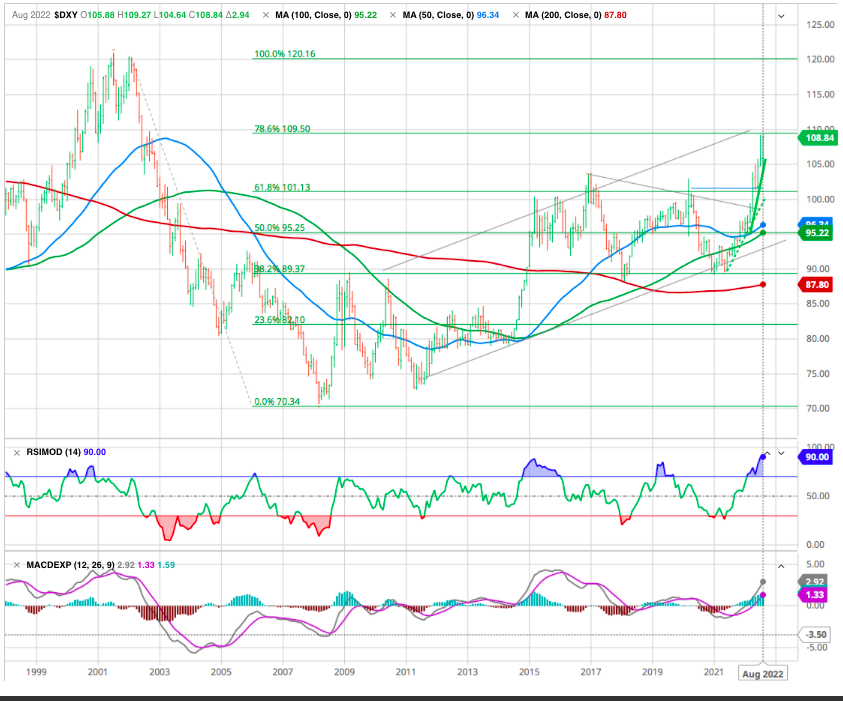 After two failed attempts, it finally managed to break above the 61.8% Fibonacci retracement of that past bearish sequence (at 101.80) in June, in a positive move that allowed for onward rise towards resistance presented by the 76.4% Fibonacci retracement at 109: short term it has made a local high at this level and following an initial pullback, the index is approaching this level again.

In terms of stocks, well, they aren’t cheap and have become disconnected from bonds and the dollar, which means there’s significant downside risk from here.

The spread between the S&P 500 earnings yield and the 10-year Treasury has collapsed to around 2.4%. The only time the spread between the Treasury rate and the earnings yield of the S&P 500 was closer came in April 2022. The only other time the spread has been this low on a rate-adjusted basis was in the fall of 2018, and no other time over the past 12 years.

If that spread were to return to around 3%, assuming the 10-Yr Treasury remains about 3%, the earnings yield on the S&P 500 would need to rise about 6%, or equal to a PE ratio of about 16.6. With S&P 500 2022 earnings estimates of $226.60, the index would be worth about 3,750. The higher rates climb, the further the S&P 500 PE ratio would fall, and we could also assume that the spread between the 10-Yr and the S&P 500 earnings yield should widen, which means that ultimately that PE ratio needs to fall potential much more.

Earnings Estimates Are Coming Down

Starting last year, we discussed on numerous occasions that earnings estimates were overly optimistic and would need to come down to align with economic realities. That process has now begun.

In the last two months, estimates for Q4-2023 have dropped by roughly 12%. Such would be considered normal for an economic slowdown. However, if the economy slips into a recession, a decline of 50% in the estimates would be in line. 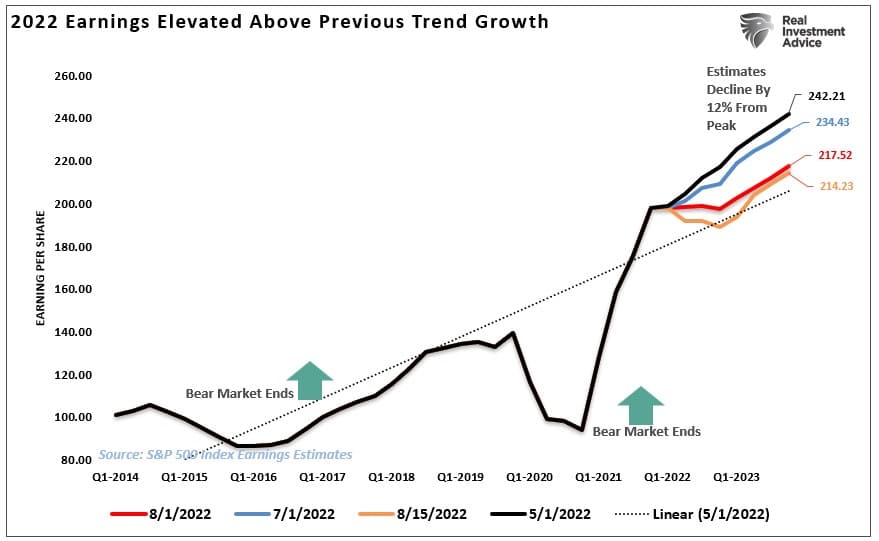 The decline should not be surprising, given that economic growth and earnings have a long-term historical correlation. Such would seem logical, given that economic activity generates revenues for companies. Therefore, while it is possible for earnings to grow faster than the economy at times, i.e., post-recession, they can not outgrow the economy indefinitely. The earnings surge in 2021 is something never witnessed previously and must eventually revert to norms. 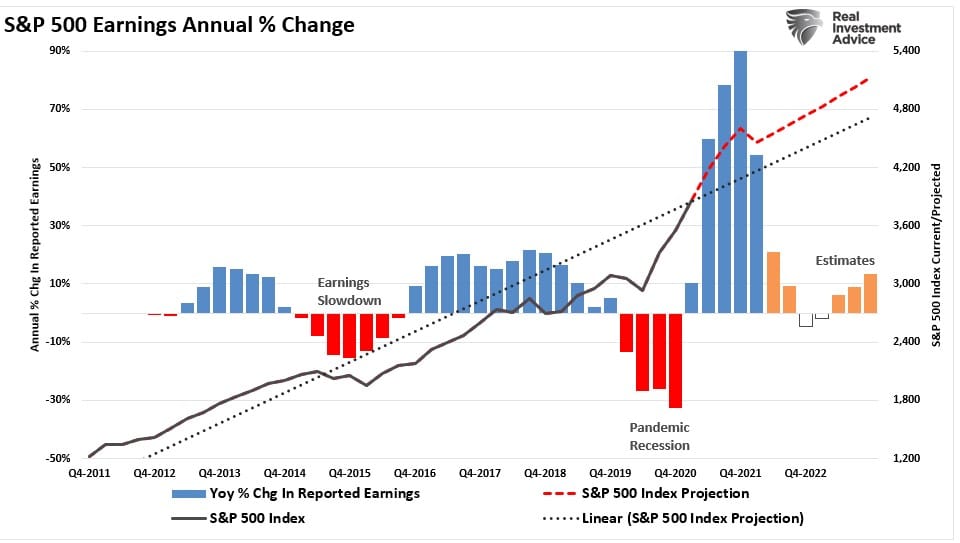 While the bulls remain optimistic, the deviation between prices and fundamental realities suggests risks that investors should not quickly dismiss.

1. The Federal Reserve’s primary goal is to lower inflation back down to the 2 percent target.
2. Price stability is essential for a functioning economy, and the Fed is responsible for maintaining it.
3. Without price stability, strong labor market conditions cannot be sustained.
4. Reducing inflation will require the use of monetary policy tools to better balance demand and supply.
5. This may result in a period of below-trend growth and some softening of labor market conditions.
6. However, the alternative of not reducing inflation would be much worse.
7. If households and businesses expect prices to go up, it becomes hard to get inflation down.
8. The longer high inflation persists, the greater likelihood of higher inflation becoming entrenched.
9. History shows that the employment costs of bringing down inflation are likely to increase with delay.
10. It is necessary to take deliberate and expedient steps to moderate anchor inflation expectations.
11. It can take a period of very restrictive monetary policy to bring down entrenched high inflation.
12. The aim is to avoid this outcome by acting with resolve now.
13. The Fed is responsible for delivering low and stable inflation.
14. This responsibility is unconditional.
15. Inflation has been running above the Fed’s goal for some time.
16. The Fed needs to take action to moderate demand and bring it more in line with supply.
17. The Fed is committed to achieving its goals on inflation.
18. Expectations about future inflation play an important role in setting the path of inflation over time.
19. The Fed needs to remain vigilant in order to keep inflation expectations well anchored.
20. Lessons from history are guiding the Fed’s actions as it works to bring inflation down.
21. Paul Volcker described how inflation can “feed on itself” and become difficult to break free from.
22. Alan Greenspan said, when inflation is low and stable, people are less likely to focus their attention on it.
23. The current high inflation in the United States is the product of strong demand and constrained supply.
24. The Fed’s tools work principally on aggregate demand.
25. It is crucial that the public’s expectations about future inflation remain anchored.

‘A whopping 84% say it may take two years or longer for the Jerome Powell-led central bank to bring inflation down to the official long-term target of 2%.’ 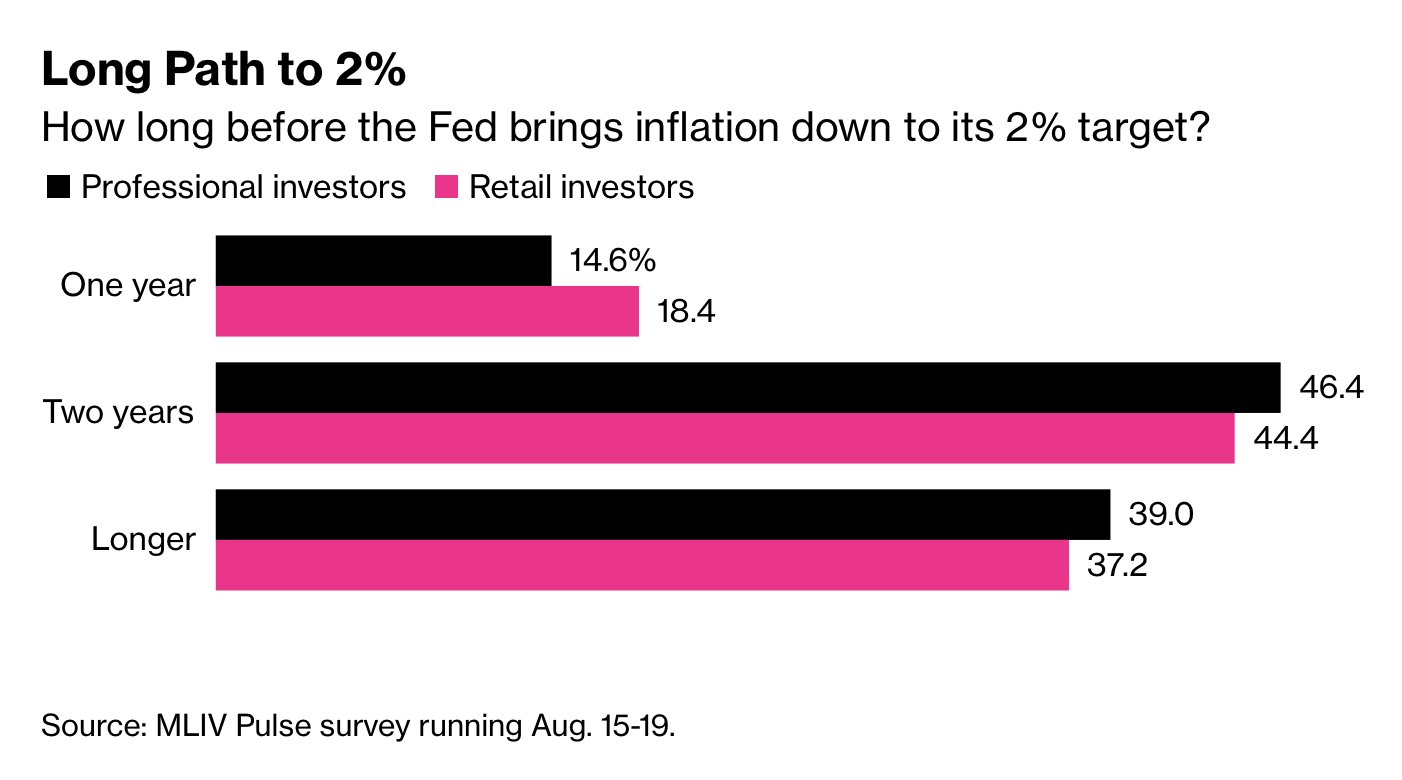 IMPORTANT : Note that the Fed is also smart enough to give its communication to spin doctors who will know how to influence the opinion. Thus with a VERY hawkish line, the Fed gives itself the means to ease (or pretend to ease) its line (temporarily) and thus alleviate the tensions on the economy and the markets – the elections are in November).

In such a case, it will be important to follow the market trend and seize the identified opportunity (October) to position oneself.

Which will surrender first ?