MARKETSCOPE : Hopping into the Year of the Rabbit

Be Patient and Selective 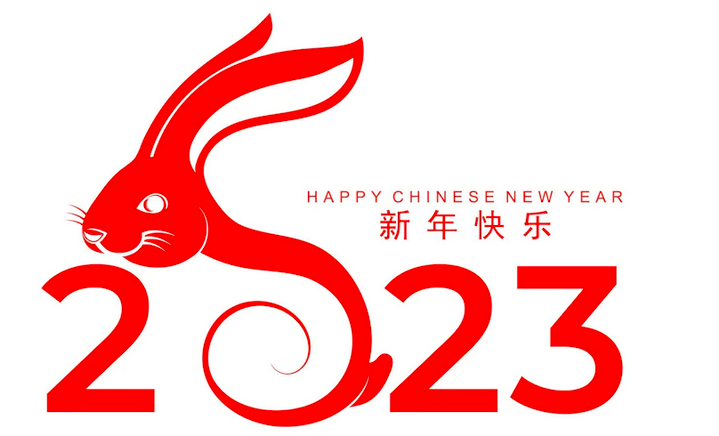 A painful bear market, touched off by decades-high inflation and an aggressive Federal Reserve response, made 2022 one of the most challenging years for investment returns in the last half century. The Tiger meant 2022 was a fast-paced year of roaring claws, strong paws and stealth killer. But like the animals, rabbits are much tamer in comparison to tigers. So we can expect 2023 to be a much chiller, more restful period,

Chinese astrology is about much more than “year of the Rabbit”. There are also all sort of interplay between elements to consider. This year’s element is water, meaning things feel more fluid or require more fluidity. If you’re used to rigidly planning things, a “go with the flow” approach may serve you better in 2023. Also here, in this case , yin water over yin wood and the positioning of various stars.

But let’s not pretend any of us understand all that. What we want to know is : what doses this mean for markets ?

While 2022 was a yang year (meaning it was more about action), 2023 will be a yin year and much more passive. There will be moments for reflection, rest and renewal.

Rabbits are gentler, but they’re also agile and cunning. So in 2023, you will be able to navigate life quickly and thoughtfully while avoiding stressors and dangers.

The Year of the Water Rabbit can be visualised as a construction team working to build new houses for a village, denoting an environment where initiative is essential to establish solid foundations for the year ahead. Opportunities abound in this year of Water and Wood elements.

Nevertheless many temptations and uncertainties lie ahead of us. Plan for the future and avoid putting all your eggs in one basket. Stay prepared for opportunities and strive hard to achieve success.

According to Fend Shui Master Ken Koh : the water rabbit year brings a sense of calm and stability to markets, which means tahat interest rates will stabilise, adding confidence to stock markets, especially after May. The rabbit may also bring geopolitical calm to the West and South China Sea.

Don’t hold your breath for a durable recovery in U.S. equities in the year ahead. Instead, let the market pay you to wait for better opportunities farther down the road and looking abroad for potential returns.

For career and financial success, taking action early in the year is recommended, especially in February when rabbits are active. The seeds we plant early in the year are the ones that bear fruit later on, so start planning.

All told, we encourage investors to be patient. Uncertainty around the economy and markets remain high, and investors should demand a premium for taking risk. Be open to rebalancing portfolios as inflation and interest rates normalize

Let’s go back to the present of the markets.

The major US equities indexes ended mixed for the week and US Treasury yields fell as recession fears appeared to weigh on sentiment. 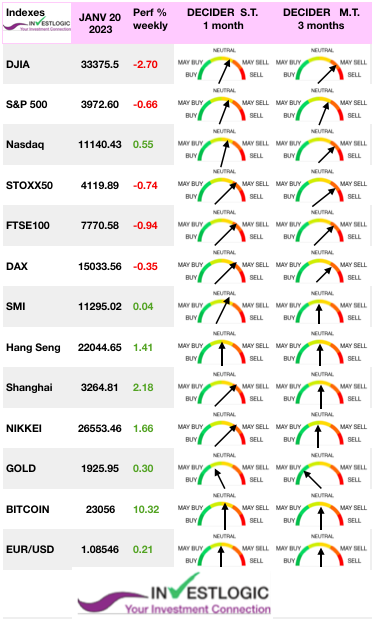 Tech-related stocks led the way, with Netflix surging 8.5% after gaining more subscribers than expected in its latest quarter even as the company missed earnings estimates, and Alphabet adding more than 5% after Google announced plans to cut 12,000 employees.On the contrary shares in Goldman Sachs fell sharply on Tuesday after reporting earnings misses.

As earnings season picks up pace, concerns about the global economic outlook and the extent of future rate hikes are likely to remain in the spotlight and increase market volatility.

Investors are clinging to two main strands, looser monetary policies on the one hand and the hope of an upturn in China on the other. This is not stopping central bankers in Europe and the US from trying to calm down the prevailing optimism.
The long-awaited pivot may not happen immediately. The fundamental question in 2023 remians the ability of central banks, particularly the Fed, to curb inflation while achieving a soft landing for the economy.

Shares in Europe weakened after ECB policymakers signalled that they would still hike interest rates aggressively.

Chinese equities rallied for a 4th consecutive week ahead of a weeklong holiday following reports indicating better-than-expected economic growth. For the time being, the renewed confidence in China is mainly fueled by investors’ intuition rather than by tangible signals, apart from the mechanical improvement of the situation caused by the end of the zero-covid policy. 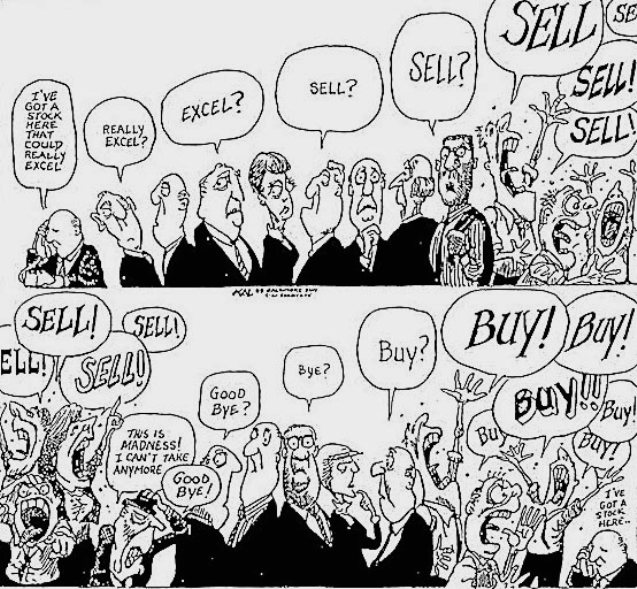 The S&P 500 (SPY) seems to be on the verge of an important breakout above the key level of 4,000. That’s because some are applauding the lowering of inflationary pressures. However, the flip side of that coin is that this is happening because of a recession looming on the horizon that provides ample reason to remain bearish in 2023. 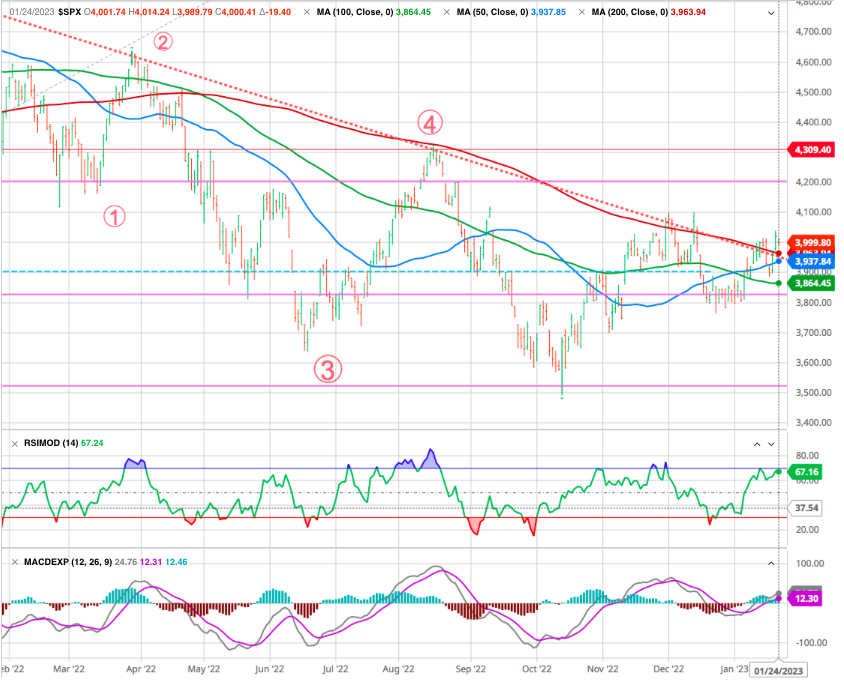 Some data and FED commentaries sent the markets lower on Wednesday and Thursday and retested support where the 20- and 100-DMA currently reside. On Friday, the market gathered steam bouncing off support and rushing back to the 200-DMA resistance. The bulls remain in charge with the MACD “buy signal” intact.

While the bulls currently seem to be clearly in control of the markets, ample data suggests further risk in the months ahead. 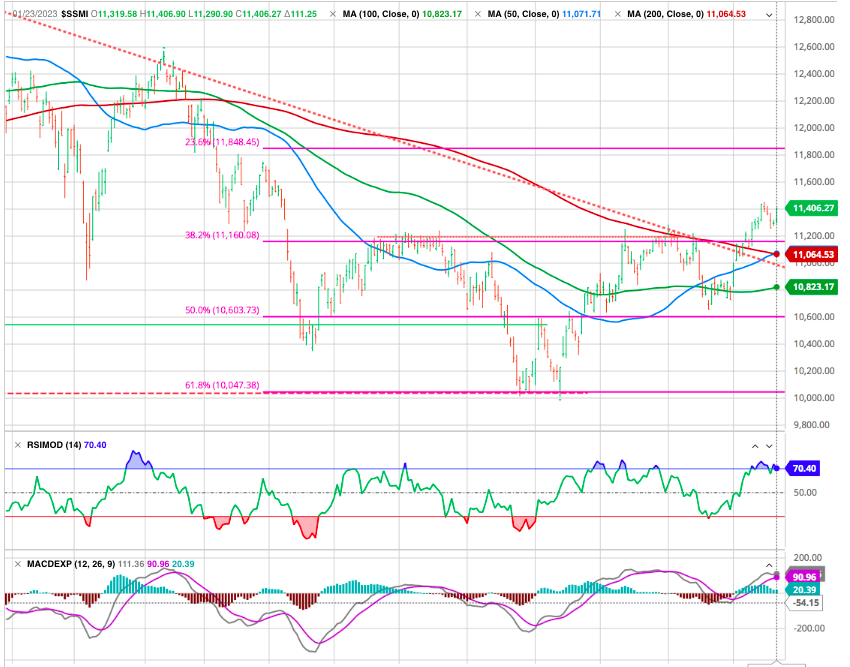 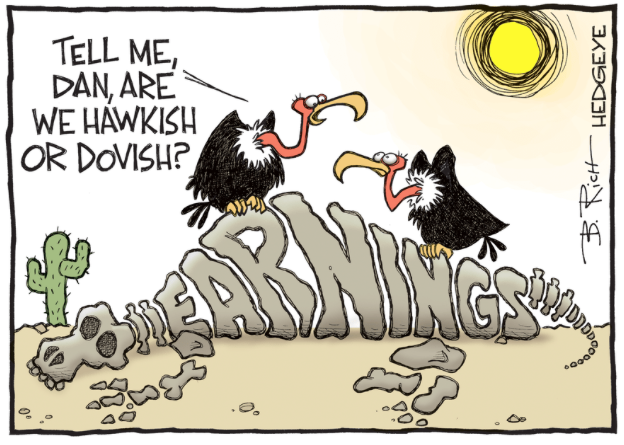 Pay attention to corporate earnings over the next couple of weeks. We suspect we will see more mentions of slowing demand if December retail sales are any indication.

Earnings growth estimates for 2023 are muted across most of the globe, but analysts are not anticipating an aggressive earnings recession. Earnings growth in emerging markets overall is expected to be flat as increases in estimates close to 15% in China and India offset a roughly equally large contraction in Taiwan, South Korea and Latin America.

Metals: Optimism continues in the base metals segment. The Chinese awakening continues to fuel the rise in metal prices. Copper is still trading above USD 9,000 per metric ton and has peaked near USD 9,500. In precious metals, gold is poised for another weekly uptrend at USD 1930.

Energy: The International Energy Agency’s (IEA) monthly report was the highlight of this week for oil markets. In broad strokes, the IEA believes that the lifting of health restrictions in China should boost global demand growth as Beijing accounts for nearly half of global demand.

Cryptocurrencies: Bitcoin has had its best start to the year since 2015, regaining more than 28% since January 1. After experiencing a real explosion the week before, the digital currency is stabilizing by clawing back 1% last week, and is hovering around $22,000

Inflation is absolutely coming down at a quicker pace than most expected. This does mean that hawkish Fed policies are working. And they may pivot to dovish earlier than expected…but not for quite a while.

However, the real reason inflation is moderating is because we are now teetering on the edge of a recession. This came through loud and clear from recessionary signals from a myriad of January economic reports.

We expect things to roll further bearish as more investors broaden their focus from just the inflation picture to the overall health of the economy. The more they read recession, and with it lower corporate earnings, the more likely stocks head lower from here.

That’s because the leading cause of bear markets is the state of the economy…where recession = bear market.

So keep your eyes firmly fixed on that economic picture to guide your investing decisions from here. The current clues point to more downside ahead. However, that may not fully take place until after the February 1st Fed announcement where Powell will once again remind bulls that he did not stutter when he said that rates will be high for a long time. And that long time is far from over.