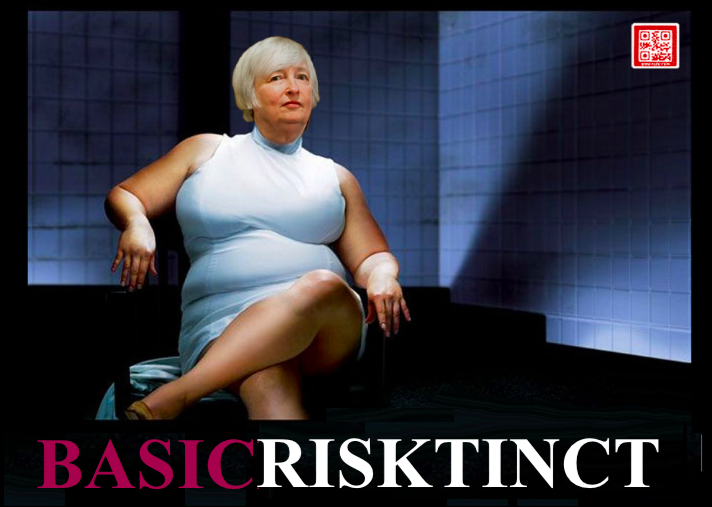 “My hope is we will achieve a soft landing, but Americans know it’s essential to bring inflation down and, over the longer run, we can’t have a strong labor market without inflation under control” Janet Yellen

The major indexes managed to regain some ground this week, despite erratic days. Investors will continue to monitor inflation data, while awaiting the Fed’s decision at the end of the month.

The Holy Grail for any central bank at the moment is to keep inflation in check without damaging the economic momentum too much. Some think this is squaring the circle. Others believe that the undermining will eventually pay off. In the meantime, last week’s respite is welcome. 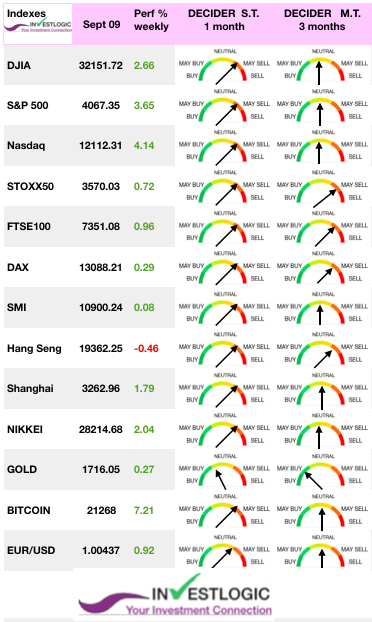 Stocks broke a losing streak last week as investors appeared to grow more confident that the market had reached at least a temporary bottom, despite the austere policies adopted by central banks to avoid a prolonged period of hyperinflation. Perhaps this is a sign that investors are becoming more positive about inflationary issue?

U.S. stocks rallied on Friday major indexes snapped a three-week losing streak as investors continue to factor in the expectation for higher interest rates just around the corner.

All 11 sectors in the S&P 500 closed in the green for the week. Energy shares underperformed while a rally by major tech stocks helped the sector to outperform. with the consumer discretionary sector standing out as the top gainer. The Dow finished the holiday-shortened week up 2.8%, while the S&P 500 Index rose 3.6% and the Nasdaq shot up 4.2%. The 10-year U.S. Treasury tacked on 12 basis points during the week to end with a yield of 3.32%.

European stocks rose after some countries announced plans to deal with the energy crisis and boost their economies. As expected, the ECB increased its key interest rates by a record 75 basis points, after having raised them by 50 points in July. A tightening cycle that started in the worst possible context, as the energy crisis is creating turmoil not seen in a decade in the Eurozone and more broadly in the EU.

Look for the CPI inflation report for August to be one of the big talking points in this week. The report will drop with Federal Reserve Board members in a blackout period next week ahead of the next FOMC meeting set for September 20-21.

MARKETS (check our latest  what are the charts telling us)

As emphasized by Ed Yardeni Research I: nvestors Intelligence Bull-Bear Ratio (BBR) slipped early last week for the third week, to 1.00 (chart below). BBR readings of 1.00 or less tend to be associated with good buying opportunities for long-term investors.

That also might explain last week move as the market remained oversold.

That reflexive rally started on Wednesday and carried through into Friday as the bulls took charge, ignoring warnings from Central Bankers that tighter monetary policy was coming. Notably, the market is setting up a more bullish posture short term, as shown below. 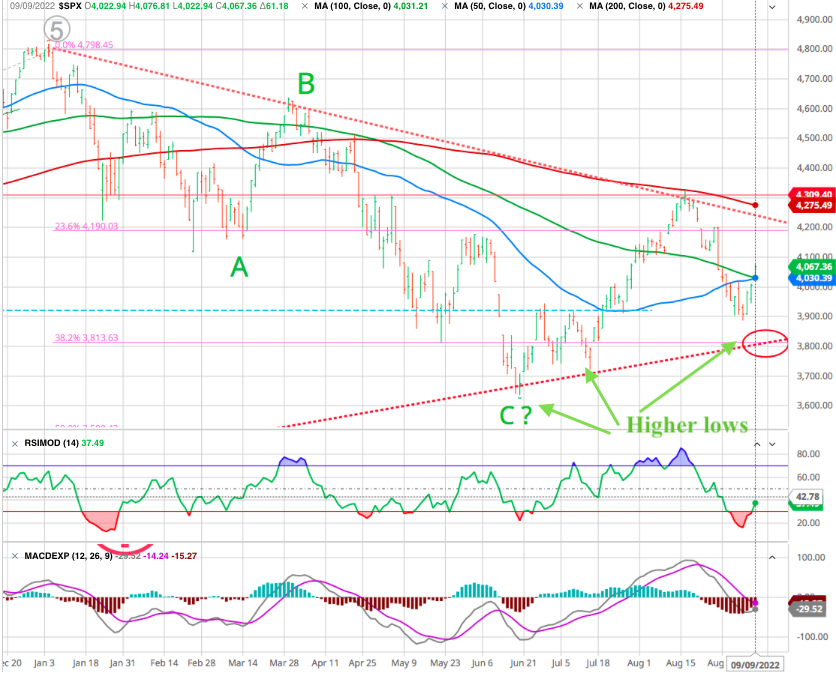 First, the market held support at the rising bullish trend line and managed to climb through resistance at the 50- and 100-day moving averages (dma), which now sets up a potential rally to the 20-dma.

Second, with markets not overbought, there is fuel for an additional rally into next week.Important pivot is set at the intersect  of the long term uptrend line and the 38.2% fibo retracement support.

While we may add exposure for a short-term rally, we will likely “sell” any rally to the downtrend line around4200 for the time being. 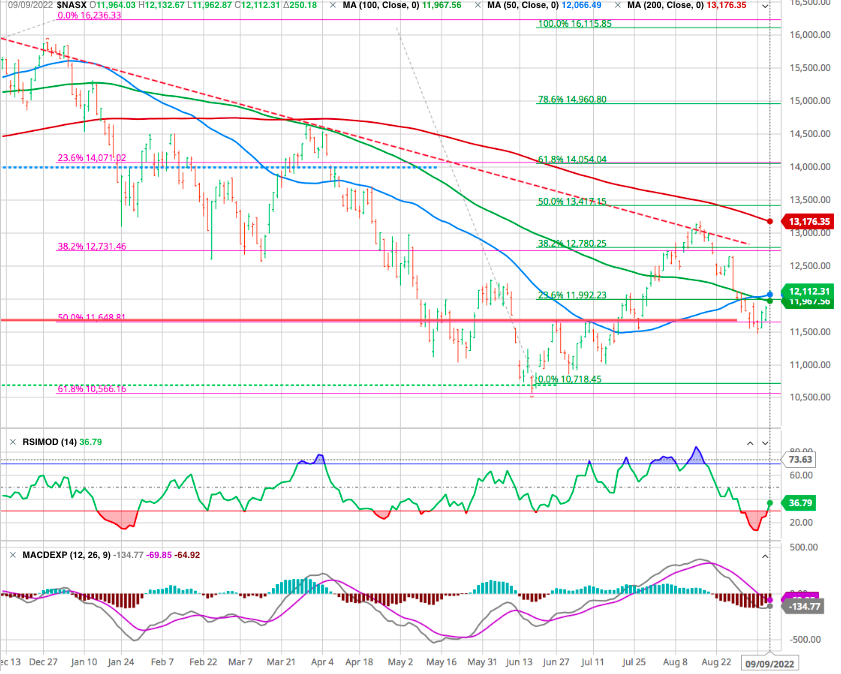 The market is very close to flipping the MACD onto a “buy signal”, although not very convincing in our opinion.

The more bullish market participants should be aware the Fed is ultimately pushing for lower stock prices. The Fed is removing liquidity by reducing its balance sheet twice as fast as in 2018. For those who don’t remember, the last QT ended in a 20% market plunge over three months.

‘As always when superbubbles burst, the bear market rally after the initial stage of the decline but before the economy has clearly begun to deteriorate lures unwary investors back just in time for the market to turn down again and the economy to weaken.’ Entering the Superbubble’s Final Act

Oil gave up some ground this week, pushing Brent crude prices momentarily below the USD 90 line. These price levels may prompt OPEC member countries to take more action to support prices, as currently the expanded cartel has agreed to cut production by 100,000 barrels per day. Brent crude oil is trading near USD 90 per barrel, while the US benchmark, WTI, is trading around USD 85.

The precious metal regained some height at USD 1720.

Bitcoin started the week badly but seems to be ending it in better shape. The leading cryptocurrency was closing in on the USD 22,000 mark. This week will be an important one for the crypto universe, as Ethereum’s merger from proof-of-work to proof-of-stake is scheduled to take place between September 13 and 15.

EURUSD rallied towards its resistance

Last week, the negative momentum  in the euro drove the pair below its prior low at 0.9950.

However, despite this negative price action, the positive momentum has resumed and drove the pair towards a key resistance just shy of 1.02. 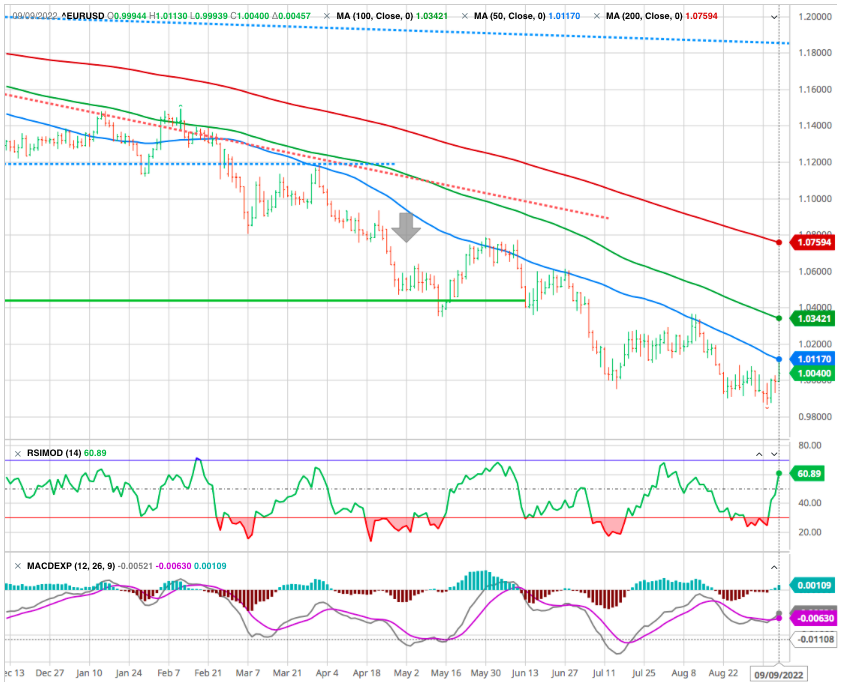 A daily close above this level would trigger a rise towards the next technical hurdle at 1.0370.

As US markets rallied and the ECB move, the dollar index dropped. 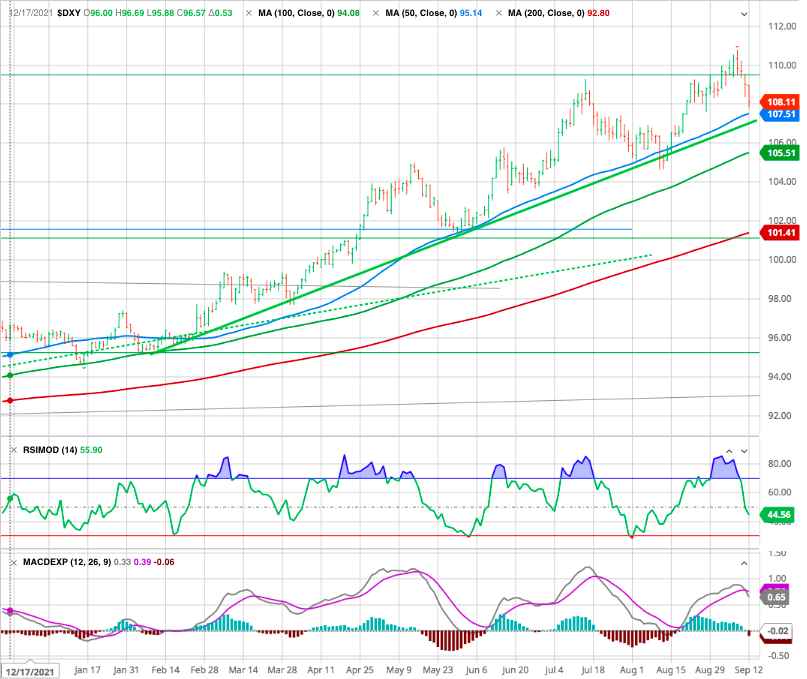 A strong dollar helps the US to reduce imported inflation, but it is far from a panacea. Too big a currency shock risks undermining and, in some specific aspects, destabilizing a global economy that is yet to fully come to grips with the consequences of declining growth and high inflation.

This is a reminder that the dollar is a relative, rather than an absolute, price — that is, it measures the value of the dollar relative to other currencies.

Many are wondering if the ECB can even play catch-up, or if it is caught in a Catch-22. Raise rates to stave off entrenched inflation, only to find that energy prices are keeping costs elevated and weighing on economic output.

And we have the answer: after lots of heming and hawing, moments ago the ECB hiked its deposit rate by 75bps from 0% to 0.75bps, the first time European rates are positive in over a decade (since July 2012). The ECB itself described today’s move as a “major step” that’s frontloading the transition toward a more neutral policy stance. 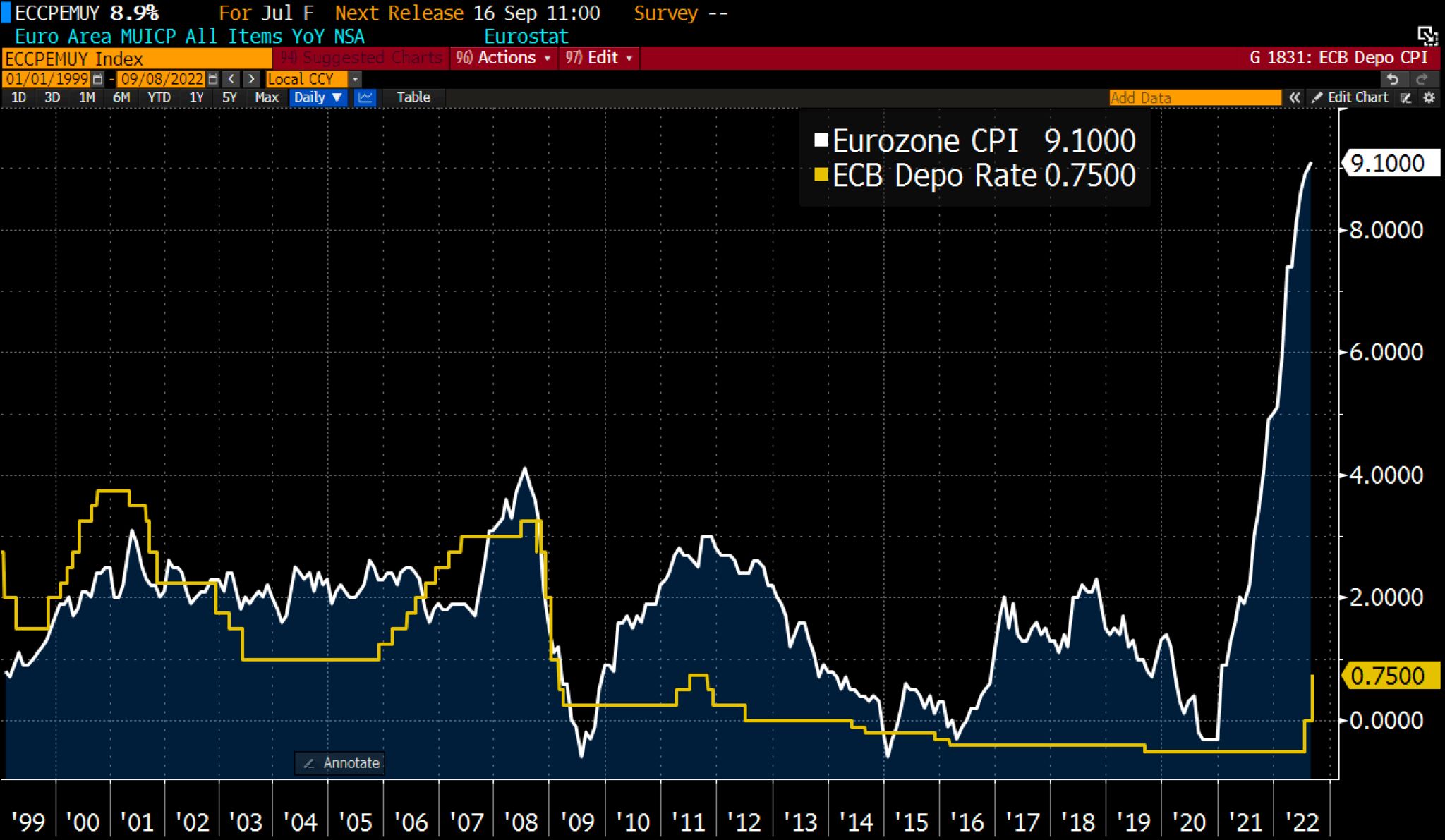 Playing catch-up won’t be easy, with the eurozone staring down the barrel of a severe economic crisis. The common currency is plunging amid surging inflation, which hit a new all-time high of 9.1% in August, while a damaging recession is in the works due to an energy crisis. Things aren’t getting any better as Russia threatens to cut off all gas supplies to the “collective West” ahead of what might be a harsh winter. 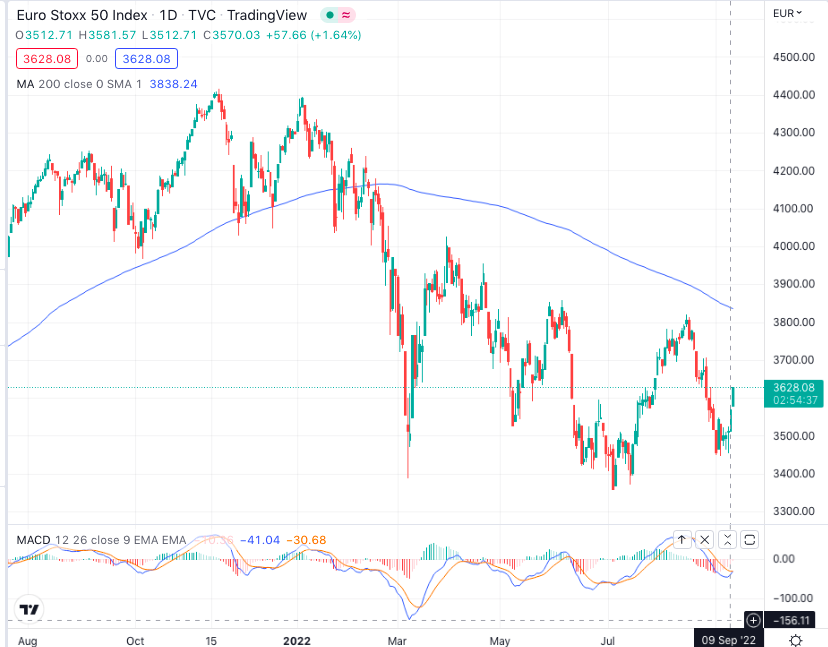 In that situation, inflation may not decline, or can at least take quite a while to decline, risking a nightmare stagflation scenario

At Jackson Hole, ECB executive board member Isabel Schnabel acknowledged a trade off between taming inflation and maintaining growth. Yet she stressed “a ‘robust control’ approach to monetary policy, focused on getting inflation down at whatever cost.”

Surging Stocks Are The Last Thing The Fed Wants

The stock market just doesn’t get it.

Stocks are fighting the Fed with another rally attempt. However, it seems difficult to imagine how any rally can be sustainable given the number of headwinds facing the stock market. These are not only headwinds; but a tremendous force, with the Fed clearly stating it wants tighter financial conditions.

Notably, the Fed has not accomplished its task and remains committed to fighting inflation. On Thursday, Jerome Powell reiterated his case, stating:

“We need to act now, forthrightly, strongly as we have been doing. It is very important that inflation expectations remain anchored. What we hope to achieve is a period of growth below trend.”

That last sentence is the most important.

The current uncertainty may turn out to be worse than the slowdown itself: As the outlook clears, we believe the dispersion in individual company earnings and cash-flow performance is likely to be increasingly reflected in differentiated market pricing.

While financial conditions have tightened recently between higher interest rates and surging inflation, they remain below zero for now. Such is hardly the environment desired by the Fed to quell inflation.