Weekly Market Wrap as of October 14 : The Wizards of Ponz

Janet Yellen to be Next Fed Chair : Observations and implications: 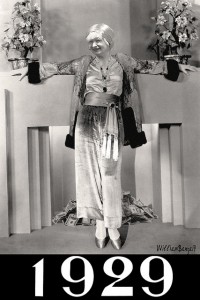 Market reaction was muted . . .this was not entirely unexpected.

She’s eminently qualified. She’s a Keynesian, not a monetarist. Her speeches suggest she thinks high unemployment is cyclical, not structural, and that the Fed can/should be working to lower it. She’s

considered to be a somewhat more forceful leader than Bernanke She helped design quantitative easing  (QE) and was a proponent of continuing it . . .(but see also the comment below about the Fed minutes).

Time will tell for Yellen, but history isn’t on her side. The Fed’s balance sheet is out of control, the U.S. dollar looks top heavy and inflation is much more of a problem than any Fed head will lead on.

The Federal government grinded through a second week of partial shutdown, keeping hundreds of thousands of Federal workers furloughed and many hundreds of thousands of others working without pay. And perhaps most important of all, the government is now within a couple of days of the October 17 deadline that the US Treasury set for raising the debt ceiling and after which the chances of a cataclysmic default rise.

A Couple of Debt Ceiling Tidbits:

More inflation on the way? Sounds like the perfect time for gold talk. 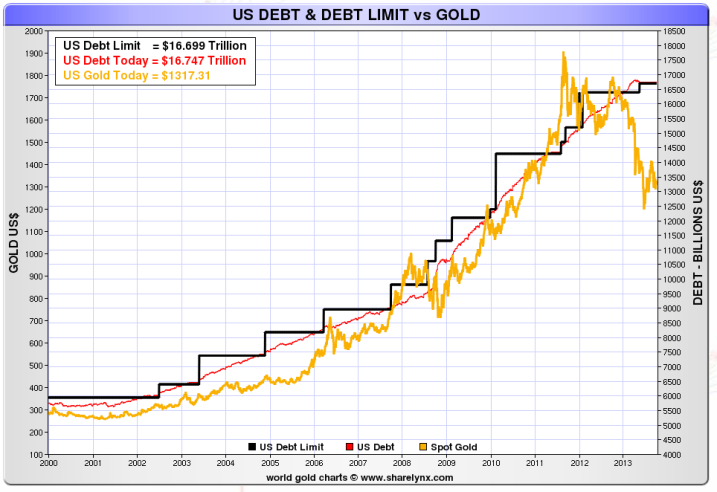 FOMC Minutes showed that the decision not to taper was “A relatively close call” despite the 9-1 Final Vote. The key reason to delay was “Risk Management”. The minutes suggest Bernanke and Yellen persuaded others to continue QE. The minutes do NOT back away from the idea that QE might (still) be tapered later this year and terminated next year. Note: the next Fed meeting is Oct 29-30.

Perhaps more importantly, investors may not wait this long to find out what happens. Indeed, we are very concerned that markets could face a major dislocation as soon as next week as investors start to take positions to protect themselves from the possibility of a delayed debt payment.

Equities: Equity markets say, “What, Me Worry?” Stocks caught a bid Thursday on reports that negotiations to resolve the latest US fiscal crisis have begun; 322 points were added to the Dow as rumors of progress in Washington sparked a furious rally. All the major indexes were up by at least 2%…16.40 s where the VIX index finished the day, plummeting more than 16%. The fear gauge realized its largest drop in 6 months after having just jumped 20% in 2 days…

Regionally, India’s SENSEX was the standout with its 3.08% advance, followed by two other Asia-Pacific indexes — the Nikkei up 2.71% and the Shanghai Composite up 2.46%. Two of the European indexes, hit new highs; France’s CAC 40 rose 1.34% to an interim high, and Germany’s DAXK hit an all-time high with its 1.18% gain.

Bonds: Money markets trembled this week. Benchmark 10-year government notes appear to be the safe haven in this debt ceiling fight. Meanwhile, lower maturity US Treasuries were under some selling pressure. This is particularly true at the nearest maturities—4-week yields spiked this week. Foreign sovereign markets were generally quiet as well …Portuguese yields came down again (another sigh of relief).

Currencies: The dollar was up about 1% against the Yen, roughly even against the Euro, and down modestly against most key emerging market Currencies. The Indonesian rupiah (notably weak recently) was strong (sigh of relief). The Chinese currency appreciated modestly, to a new all-time high against the dollar.

Commodities: Oil (Brent) continues to trade around $110 as expected, down about 2%. Gold remained offered, slipping to a 3-month low, down about 3%.

Last week one of the most interesting discussions revolved around gold’s behavior over the past six months. I don’t want to say much more than that right now. Just know that I’m watching a couple of key levels very closely as the end of the month approaches. Stay tuned next week for the whole story…Let’s just say Gold is for patient, long-term investors looking for a great portfolio diversifier, a moderate weighting in gold and gold stocks may be just the answer. And, today, when looking across the gold mining industry, you’ll find plenty of companies that have paid attractive dividends, many higher than the 5-year government yield.

An Oil Chart To Trade On

Earnings estimates and actual earnings growth plunge. Analysts have almost exclusively an overly positive attitude at the beginning of the year. Over time, a gradual adjustment and adaptation. Forward earnings expectations. 2013 is no different from the historical trend. 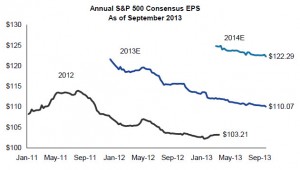 The first of the S&P 500 companies to report was Alcoa. Its aluminum products are used in autos, air craft, beer cans…. A bellwether. So analysts fawned over its results, and investors swarmed into its stock, surrounded by talk of growing demand, etc., etc. It did report a profit, due to cost cutting, of 2 cents a share, which rose to 11 cents after all the “special items” were backed out.

Gap also entered the confessional on Thursday. September sales were flat. Same-store sales were down 3%, when hype mongers had expected a 1.6% rise. September “proved to be somewhat challenging.”

Nine retailers still report monthly same-store sales, and if that small sample is representative of the larger retail environment, September ended the back-to-school season, the second most important selling season, with a whimper. 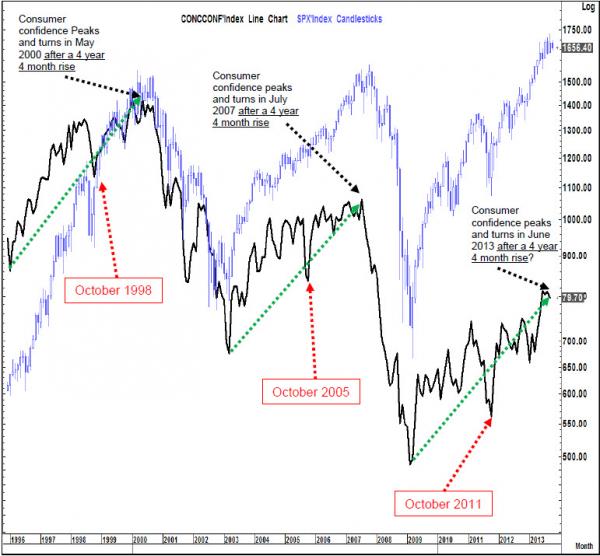 IF things tend to “go south” in the economy and the Equity markets (20%+ correction as we still expect) then we are fully confident that the FED Chairwoman natural tendency will show through. In that instance, if we have not tapered we will not. If we have, we will stop. Ultimately we could even see a consistent path with other episodes of the last 5 years. Not only do we not end up holding the line and taper to ZERO (Which I still believe is the correct thing to do) but it is possible we ultimately increase the rate of expansion in the Fed’s balance sheet.

Levels to watch on the VIX

While we have completed a short-term double bottom here it is far more important whether we complete the larger double bottom as we did in the first week of August 2011. The neckline on this double bottom stands at 21.9% with good trend line resistance also at 21.5%

To finish we recommend you to listen to Arthur Grimes’ comments.

Arthur Grimes is a very high skilled central banker. In the past 26 years he set up the monetary policy of the Central Bank of New Zealand, one of the most serious et sophisticated bank of the world. He has just stepped down. What is very special is that Arthur Grimes is at the origin of concepts of “inflation targeting” and “forward guidance” His works and conferences are of really high quality.

Here are the essentials

The U.S. FED should try to stop a damaging cycle of booms and busts by breaking investors’ expectations that it will mop up after future asset price bubbles, one of the pioneers of inflation-targeting said. He noted that the Fed had inadvertently made bubbles more likely by promising to help the economy after they burst.

The largest economy in the world is leading policies that lead to asset booms. It makes it incredibly difficult for other central banks to have a credible policy,.

Grimes said investors were still likely to pile into asset price bubbles because they expected that even if they burst, central bank action to support the economy would soon cause asset prices to return to their previous levels.

“In my view it was a big mistake by the Federal Reserve,” he said, adding that the underlying cause was the Fed’s dual mandate of targeting unemployment as well as inflation.

“Fed officials are stuck between a rock and a hard place, in terms of the themselves. You would have to have a big bang to say: ‘We are targeting price stability. We are targeting stable asset prices as well as stable goods prices'” he concluded.

Such a change would need new legislation and potentially require the United States to tolerate high unemployment after a future asset price bubble burst – something Grimes likened to the battle many countries faced to bring down high consumer price inflation in the 1980s and 1990s.

Grimes also had words of caution for central banks adopting forward guidance on their future interest rates, saying it needed to be consistent and should not be a mask for changing inflation goals.

“If you revise based on new information, that is fine. If (the public) think you are going to revise your criteria for where you are going, then you lose your credibility,” he said.

The Fed and the Bank of England have both adopted guidance which links rises in interest rates to unemployment falling to a certain level – a different model to the RBNZ’s, which produces a forecast for the level of its interest rates. 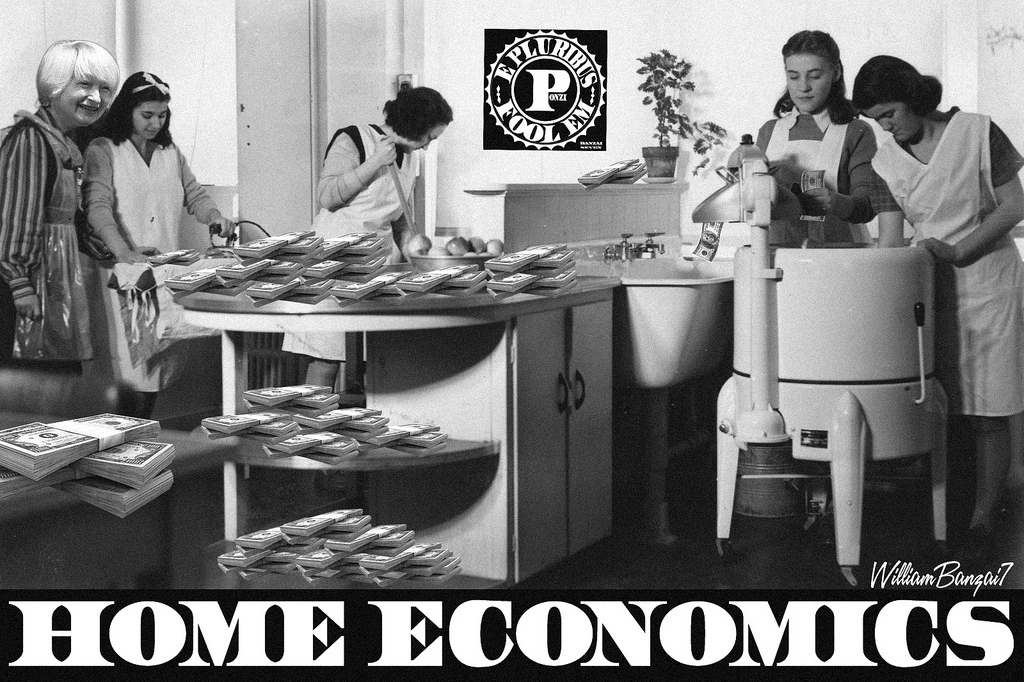