Weekly Market Wrap as of June 23

Tap on the Brakes

There must be someway outa here, said the Joker to the thief.
There’s too much confusion, I can’t get no relief.

Anyone who thinks they understand what the screens are “telling us” these past days is either psychic or delusional. Investlogic is neither….and we are frankly bewildered. This has been week of jarring turbulence in markets. Indeed, investors abruptly realigned rates higher and re-priced risk after the Fed struck a distinctly more hawkish tone and unambiguously signaled that the tapering of QE3 asset purchases would likely begin later this year instead of early next year as many—including us—had been expecting. 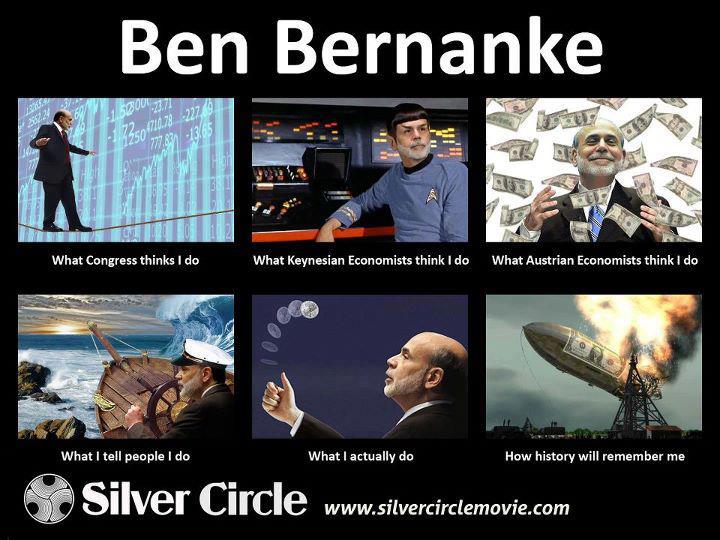 Notably, in the wake of the new QE3 guidance, the consensus view is now that the Fed will begin tapering asset purchase at the September FOMC meeting—a view with which we can hardly argue. To be sure, Bernanke provided the usual qualifications that the tapering guidance was contingent on the economy continuing to improve as expected. However, it’s clear that many investors only heard that the extraordinary policy support that has been bolstering the economy and markets for some time is poised to diminish in the not-too-distant future.

Moreover, with the winding down of QE3 now clearly approaching, the normalization of monetary policy comes onto the radar screen for many market participants, although we continue to believe actual tightening—and hikes in policy rates in particular—are still quite a long time off.

Interestingly enough, in the post meeting press conference, Bernanke was asked about the increased market volatility of the past several weeks, and the sharp rise in rates in particular. The Chairman did not seem overly concerned over the market developments, going so far as to note that the rising rates had been incorporated into the Fed’s updated economic outlook—an outlook modestly more upbeat than three months ago before the recent sharp move in yields higher.

So in the absence of any push-back from the Fed, and indeed with Bernanke seemingly validating the market move at least directionally, the realignment in rates higher has continued. This in turn is fueling a continuing erosion of risk appetites. All this is perhaps a sobering glimpse of the uncomfortably rough ride ahead for markets on the long road towards eventual monetary policy normalization.

Equities: Risk appetites eroded as the Fed signaled tapering was coming, sending stocks sharply lower. The S&P 500 had its worst week this year. Japan’s Nikkei was the exception, rebounding solidly after plunging over 20% from mid-May.

Defensive Sectors Offer no Safety and Lead the Way Lower 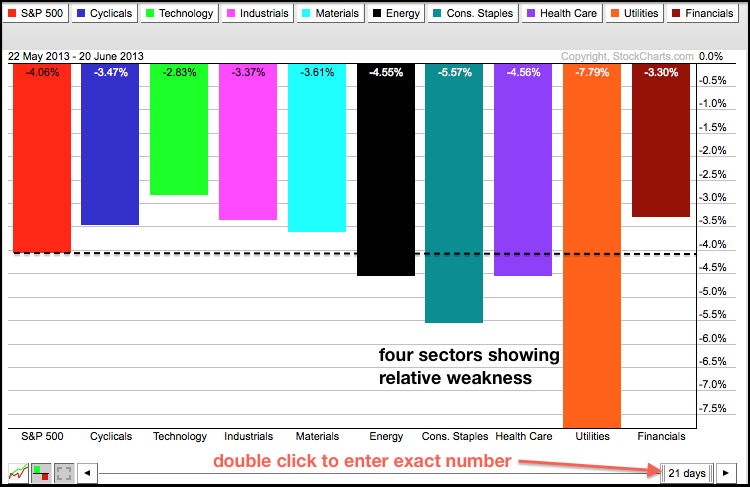 European equity markets closed down for the fifth week in a row for the first time since Summer 2011’s European crisis. Italy and Spain were the worst performers – down around 4.5% to 5% on the week – even as sovereign spreads held in only 9bps wider on the week. Europe’s VIX surged to 24% – its highest close in 4 months. Greece’s problems are emerging once again – smashing the EUR down over 2% in the last 3 days – its worst drop in 11 months as GGBs (and Greek stocks) plunge. 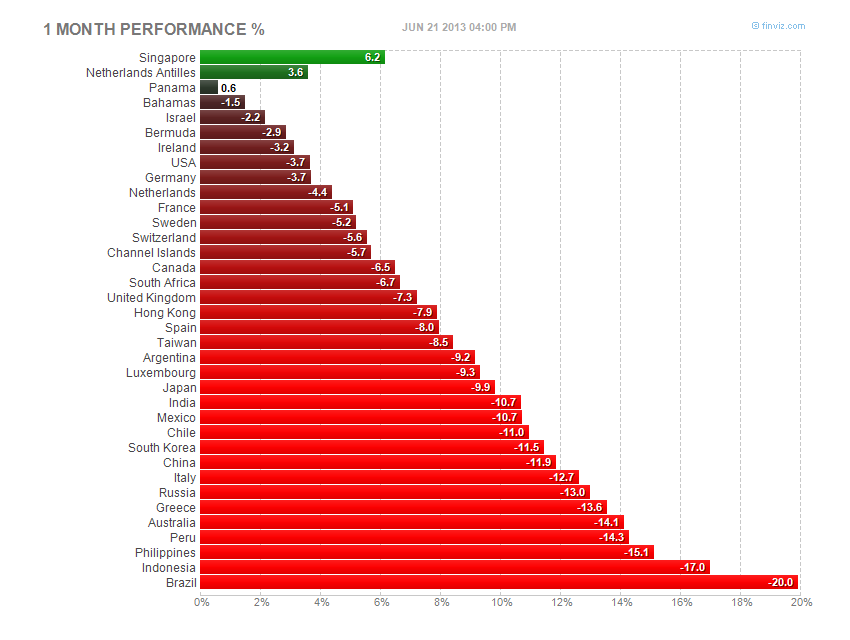 Bonds:The Fed’s hawkish tone this week further fueled the sell-off in government bonds, sending yields sharply higher. Indeed, the yield on the benchmark US 10-year note broke above 2.40%, to its highest in nearly two years. The US Treasury put today’s 10-year yield close at 2.52%.

Now let’s see the 10-year against the S&P 500 with some notes on Federal Reserve intervention. Fed policy has been a major influence on market behavior. It will be interesting to see how the index fares in the wake of the latest Fed communications on the timetable and conditions for tapering QE.

Currencies: USD was strongly and broadly bid after the Fed struck a more hawkish tone. This reinforced the month-long slide for AUD—it’s now down over 12% since mid-May to its lowest since September 2010.

Commodities: Hawkish Fed signals, the stronger dollar, and global growth concerns sent commodities broadly lower. Notably, gold dropped below $1,300 per ounce for the first time since September 2010, more than 30% below its peak.

What Lies Ahead for Gold?

Our recent calls for a bottom have been proven wrong as precious metals plunged to another new low. Two trading rules we have is to always use a 20% stop and never add to a losing position. Note our previous article in which we said use the late May low for a stop. This helps minimize risk and potential losses, though we have a handful of small losses trying to anticipate the coming rebound.

The selling is likely not over. The capitulation process may not be completed. Overall momentum remains down.

How low can gold and silver go? One can view all sorts of chart patterns and technical signals, and while a few will eventually be correct at calling the bottom, we prefer not to base our decisions on this type of strategy, starting with the fact that there are many different interpretations and too much variance in the predictions. What we do know is that given that capitulation is under way, the selling will overshoot to the downside, just like surges can overshoot to the upside. Our response should be to prepare to take advantage of that situation.

Sentiment has shifted to negative. All the headlines and stories about gold are negative and bearish. It will take a while for these investors to reenter the market, especially those who just sold for a loss. This won’t be a years-long process in the making, but it likely won’t happen in a month, either. The implication here is that patience will be required on the part of committed precious-metals investors. 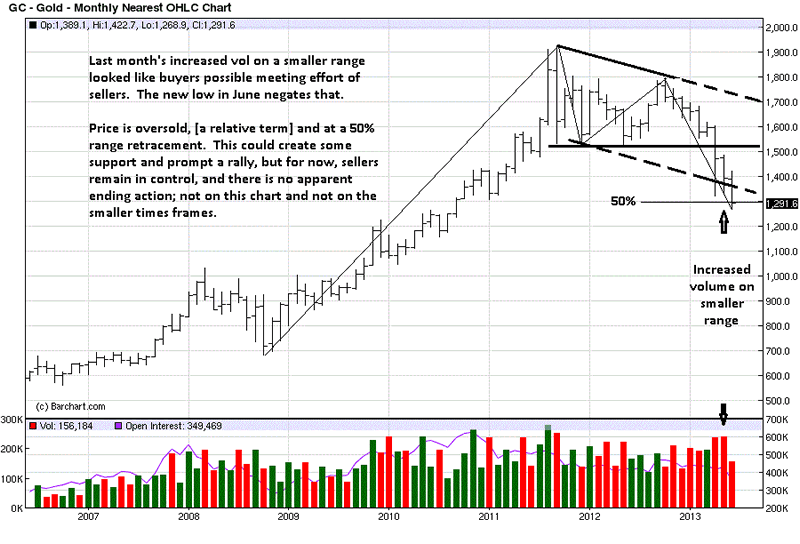 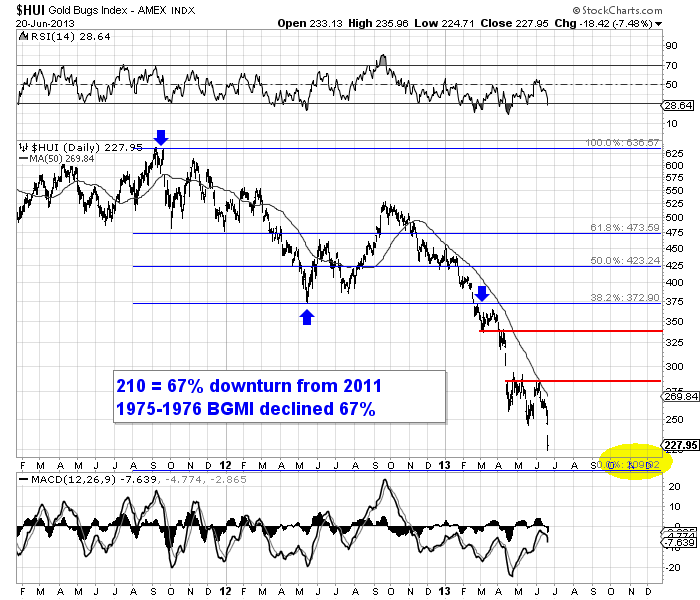