Weekly Market Wrap as of December 9

The Fed & the Wall Of Worry 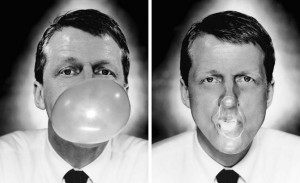 The Fed has signaled that tapering will be data dependent. Specifically, the guidance provided in the October 30 policy statement is that asset purchases will continue “until the outlook for the labor market has improved substantially” and the timing of tapering will depend on “whether incoming information continues to support the Committee’s expectations of ongoing improvement in labor market conditions.” The labor market data has improved materially from a soft summer, but many FOMC members may yet call for patience on tapering until the broader growth trajectory becomes clearer.

Clarity on fiscal policy would help bolster confidence of FOMC members on next year’s growth prospects. So chatter that a budget deal is near is encouraging. And in principle, it would increase the chances of near term tapering. The deal apparently being discussed would ease the impact of automatic spending cuts (the sequester) next year by as much as $49 billion, paid for by increases in some revenue sources. If these elements come together, we believe they could lead to growth that is just a little better in 2014 – maybe 0.5% to 1% better than what we’ve seen so far in 2013.

A third factor that will likely determine the timing of tapering is when the FOMC is ready to announce stronger forward guidance for the funds target. A new guidance regime would seek to offset the tightening signal that markets may extract from the start of tapering, aiming to reassure markets that the Fed intends on keeping the funds target near zero for quite a long time yet. It’s not clear to us that the FOMC has reached a consensus on guidance reform and until it does, tapering will probably be delayed. 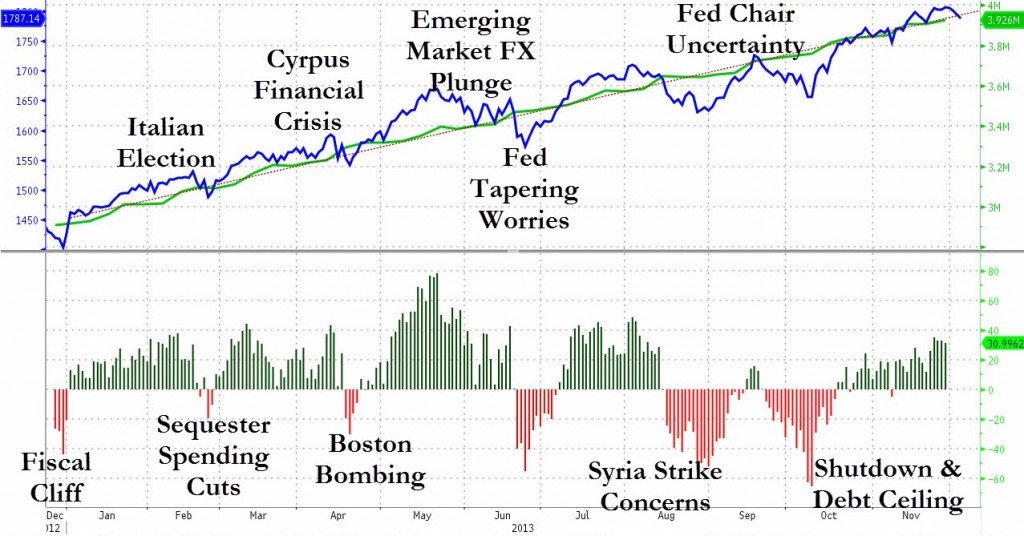 In Europe, Draghi cut inflation forecasts, raised downside risks, hinted at less likelihood of another LTRO and noted negative rate discussions but did nothing and that sent EUR higher and implicitly USD broke lower.

Do we need bubbles for growth?

We think that something structurally has changed since the Great Financial Crisis, a change that seems destined to continue to hold back growth in the near-term and more worryingly has lowered the longer-term trend rate of growth. In the absence of structural reforms, a lack of appetite for debt restructuring and no ability to pursue more aggressive fiscal policy, the temptation will be strong globally to continue to throw liquidity at the problem which is likely to continue to have more impact on asset prices than the actual economy. Bubbles could easily form which could ultimately be the catalyst for the imbalances that will likely lead to the next recession or crisis…

The base case is that the world needs low yields and high liquidity given the huge amount of outstanding debt that we’re still left with post the leverage bubble and the GFC. There’s still too much leverage for us to believe that accidents won’t happen with the removal of too much stimulus. If we’re correct, we may see a reaction somewhere to tapering and this in turn may force the Fed into a much slower tapering path than it wants.

We think we’ll see monetary authorities try the head-fake taper. They must. It will be backstopped by and saturated in statistical lying, and everyone will have trouble parsing the probable effect because the chronic dishonesty loose in these governments will have deformed and impaired all metrics of true value. At the heart of whatever remains of this economy is fire, and the officers of the Federal Reserve are playing with it. Pretty soon, we’ll get the un-taper, the final surrender to the crack-up boom that awaits before the western world has to go medieval.

Equities: Speculation that the Fed could begin tapering soon weighed on equities in spite of dovish rhetoric from other central banks. The employment report cured some of the market’s blues. The two winners were India’s SENSEX, topping our list for the second week after four weeks at the bottom of the heap, and China’s Shanghai Composite. . Year-to-date, the MSCI Japan is up roughly 50%; the S&P 500 Index was up roughly 30%; the MSCI Europe was up roughly 20%, and the MSCI Emerging Markets Index was up only about 5%.

In Europe, we prefer the regions that are fairly immune from the fiscal problems, preferring investments in Germany, the United Kingdom and Switzerland. European equities need earnings growth to continue to rally going to next year. GDP growth forecast in Europe for next year is in the 0.2% to 0.3% range.

Japan & China Have This In Common …Ground Hog Day!

The Nikkei Index and the China ETF (FXI) have something in common…”they’ve been here before!” Been where? Both have hit falling resistance line (1) several times over the past few years, the Nikkei since 1996!

It’s the same resistance line. Will the results be like the movie Ground Hog Day the same thing over and over again?

The % of NYSE stocks above their 200-day moving averages has a strong bearish divergence similar to previous plunge-preceding divergences. As BofAML notes, this points to diminishing momentum for market breadth and preceded pullbacks in the range of 15%-20% in 2010 and 2011; increasing the risk for a US equity market pullback in 2014. 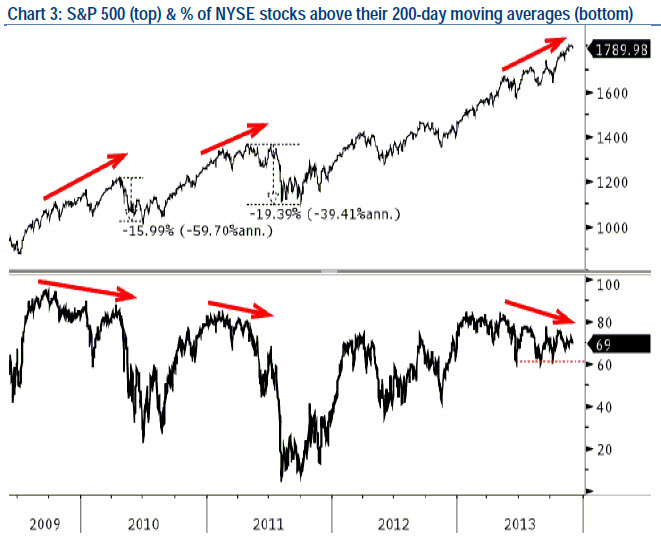 Bonds: Taper speculation also contributed to sharply higher bond yields. Key government benchmarks are approaching the highs for the year posted in late summer before the Fed’s no-taper surprise on September 18. The 10-year U.S. Treasury yield was unchanged at 2.75% and the 10-year TIP yield rose 4 basis points (bps) to 0.60%. Overseas, sovereign bond markets were generally quiet, despite rating changes for a number of Eurozone sovereign issuers (more on that below).

Currencies: EUR rose after the ECB dampened expectations of further easing in the near term. CAD, AUD and JPY remained offered. Notably, CAD depreciated to its weakest since 2010. With EURJPY pausing (on Draghi’s comments), we look to USDJPY to provide the requisite lift at the cash open in the US…

Contrary to what many thought (not us), the expected divergence of monetary policy between the Federal Reserve tapering on one hand, and the European Central Bank (and Bank of Japan) which likely to have to provide more monetary support next year on the other hand, has not spurred a US dollar rally against European currencies.  There is little reason to expect this to change, from a technical point of view.

That said, the dollar’s losses have not been broad based.  Sterling and euro (and the Swiss franc and Danish krone) are where the greenback’s losses have been concentrated.  In part, the market appears to be taking the Fed’s guidance seriously.  Tapering is not tightening. The dollar’s weakness against the European currencies does not appear exhausted.

The next technical target for the euro is $1.3800-30.   A similar level for the dollar against the Swiss franc is found just below CHF0.8900.  There is little chart-based support below there before CHF0.8500.  The US Dollar Index, which is heavily weighted toward the complex of European currencies,  tested the 80.30 area which represents a 50% retracement of the rally from late October through the first part of November.

Commodities: Crude oil prices (WTI) surged around 5% this week after TransCanada announced that it would open the southern portion of its pipeline to Gulf Coast refineries as soon as January 3rd, easing the oil glut in Cushing, Oklahoma. Gold and silver tumbled (in a deja vu of the last time Bitcoin and gold reached parity).

Gold edged up to a near one week high today as the dollar weakened and technical support held again prompting funds and investors to allocate funds to gold. Given the poor fiscal and monetary state of the U.S., we expect the dollar to weaken in 2014 which should contribute to higher gold prices. 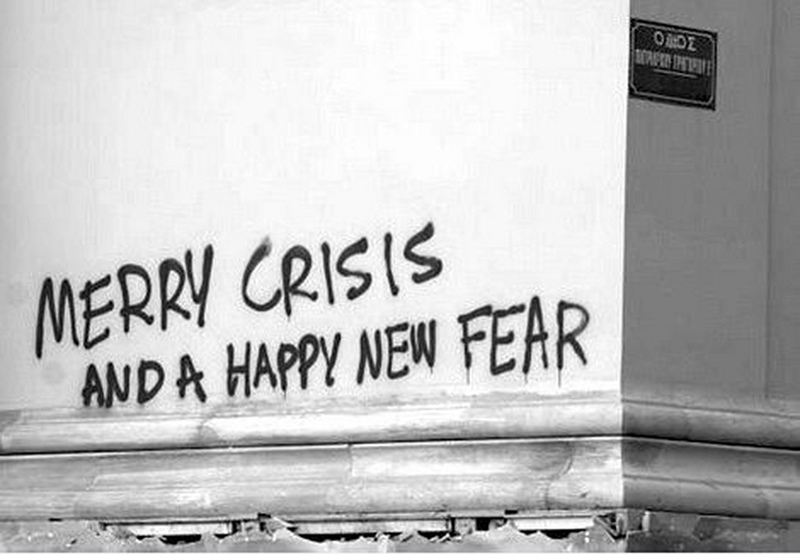