Weekly Market Review as of September 29 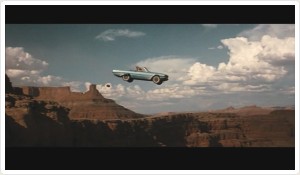 As autumn begins, the US finds itself in yet another self-inflicted fiscal policy mess. Specifically, within the next three weeks, Washington must pass a stop-gap funding bill and a debt ceiling increase to prevent a Federal government shutdown and the potential for a default, both of which could impart significant damage to financial markets and the broader economy. Markets have been sanguine but are now showing some jitters as deadlines approach without clear signs of progress.

The first deadline is October 1. A funding bill must pass to authorize the Federal government to continue spending on discretionary programs representing roughly one-third of the budget. Even so, the House may not be able to pass a clean bill by Monday, in which case there would be a partial government shutdown. This in-itself would unlikely cause devastating economic damage. Indeed, the 1995-96 shutdown, which lasted 21 days, subtracted only about a quarter point from GDP. But it could further complicate the critical need to raise the borrowing limit, also known as the debt ceiling.

The second deadline is October 17. The debt ceiling must be raised or the Treasury will be unable to borrow and would simply have insufficient cash to meet all of its obligations, both mandatory and discretionary. One set of mandatory obligations are of course Federal debt service payments, the missing of which would trigger a default and likely global financial market turmoil. But even if the Treasury could avoid default, the government shutdown in this case would likely be economically devastating, perhaps subtracting roughly 4% from GDP. 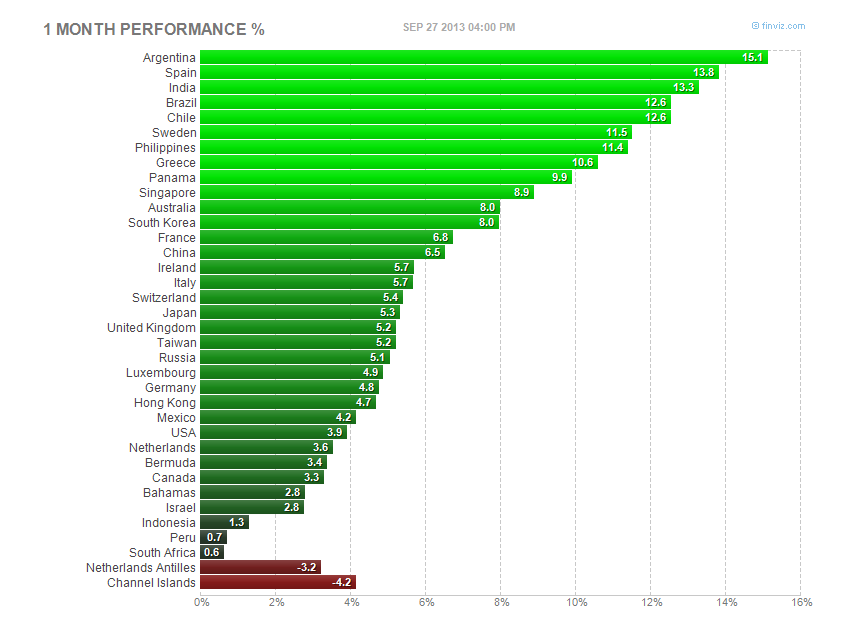 Equities: Stocks were mixed as investors began to show some jitters over the fiscal fights in Washington.
The Chart below shows six inter-market related ETFs. Notice that stocks are up with the Russell 2000 ETF (IWM) leading the way (blue). Bonds are also up for the month and this is strange because stocks and bonds are usually negatively correlated. On the other side, notice that gold, oil and the Dollar are down, which means they are positively correlated. This is also unusual because the Dollar is usually negatively correlated with commodities.

Bonds: Government bond yields were mostly lower as emerging pessimism over the debt ceiling bolstered safe haven demand. However, stresses have become evident at the short end of the US Treasury curve—an inversion emerged as liquidity dried up in the nearest maturities on fears over possible disruptions to the market if the borrowing limit isn’t raised.

Currencies: GBP remained bid on continued upbeat economic data and signals from the BoE that more QE is unlikely.

History, at least when it comes to gold, oil and U.S. government crises, may surprise you. In fact, in the weeks ahead of the last government shutdown from December 16, 1995 to January 6, 1996, oil prices   generally climbed. Gold prices   zigzagged before falling just days ahead of the actual shutdown. -Gold : see our next update – 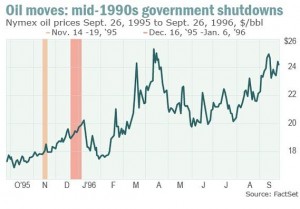 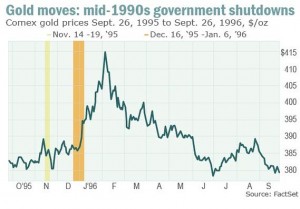 And given the recent moves in gold and oil, it appears that traders in these markets barely even care about

How concerned are we about the debt ceiling?

Failure to extend the debt ceiling is dangerous for two reasons. First, it requires that the government immediately balances the budget, cutting spending by about 20% or 4% of GDP. Second, it could cause a debt default and downgrade. On any given day the inflow of cash may be too low to cover all key obligations such as military pay, social security and debt payments. Something will have to give.

On the one hand, getting the partisan battle out of the way over the continuing resolution is much more preferable to having it over the debt limit. Whether compromise can be reached or one side is forced to capitulate, better to resolve that over a shutdown than with the full faith and credit of the US Treasury in the balance. And perhaps one way out will be to couple a debt limit suspension with some kind of budget deal after the markets start to put pressure on politicians. On the other hand, the risk that the two sides simply dig in their heels deeper, and as a result a debt limit deal cannot be reached before federal obligations start to go unpaid, cannot be ruled out. Our base case remains that the two sides will go right up to the last minute, peer over the cliff, and think better of not extending the debt limit. But the first step would be to reach some sort of deal today to avoid a shutdown, and here the odds no longer appear in our favor.

What are the unintended consequences of a shutdown?

The shutdown will likely add to the budget deficit. It is costly to stop and start programs. The 1995-96 shutdown directly added $1.4 bn to the deficit (about $2.5 bn in today’s dollars) Moreover, the shock to growth will undercut tax revenues. In addition, ironically it does not impact the implementation of Obamacare since it is an entitlement similar to Medicare. However, there is some chance it could delay US economic data releases: in 1996, the December employment report was delayed two weeks as a result of the shutdown then. The Federal Reserve and the Post Office, both of which do not depend on Congressional appropriations, will not see any cutbacks due to a shutdown.

What are the implications for capital markets?

The shutdown threat creates a risk-off trade initially and then a risk-on trade later. However, getting the timing right could be very difficult. Even if a continuing resolution passes, it will likely be only for a short period of time. That leaves the much more dangerous debt ceiling deadline looming later this month and another continuing resolution deadline likely in November or December. It may be several months before the uncertainty lifts.

Moreover, we cannot rule out three dangerous dynamics: (1) the shutdown lasts long enough to do serious damage to the economy (so the relief trade is weaker than the sell off), (2) there is a technical default on the US debt, and (3) a market correction is needed to convince Congress that it is making a serious mistake.

Recall that the big sell-off around the last debt ceiling came several days after the agreement was signed when the S&P downgraded the US debt, triggering a 6.7% one-day stock sell-off. Over the entire debt limit debacle in 2011, equity markets dropped 19%.

In our view, investors should look to a variety of signals of a likely end to the impasse. First, how strong is the public uproar around forgone government services such as the closure of all national parks? Second, do polls show that one party is being hurt more than the other? If they get roughly equal blame, the incentive to compromise will be much weaker. Third, does partisan rhetoric get even worse or do moderates assert themselves? 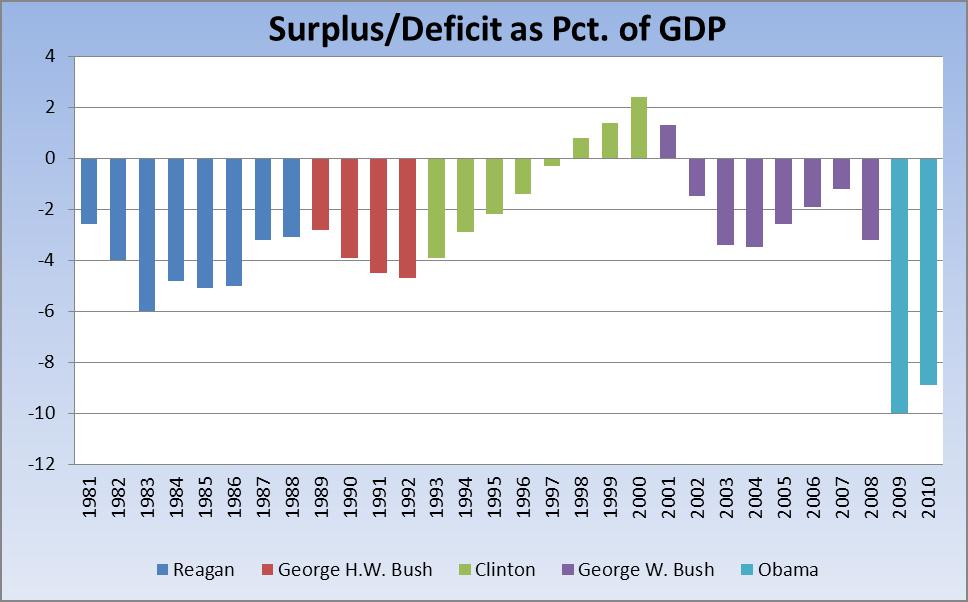 We fear that the backdrop we will be looking at will more closely resemble the late 1970’s/early 1980’s than the “Golden period” of 1995-2000 and that we will have a quite difficult backdrop to manage over the next 2-3 years.
As a consequence we believe that: 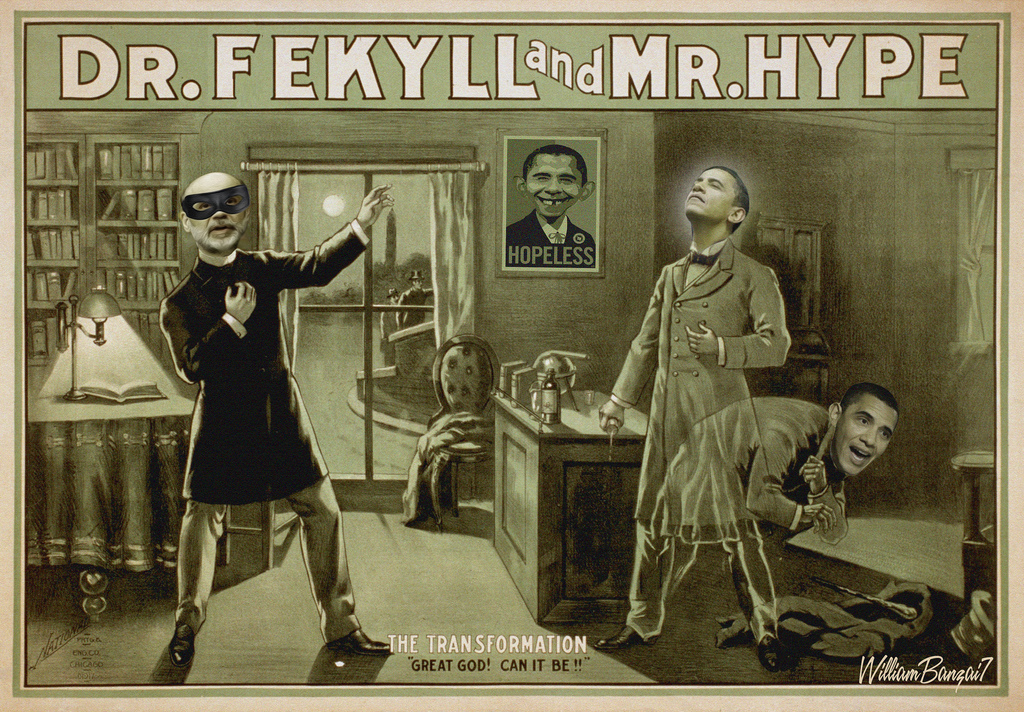