Weekly Market Review as of May 31

Last-Minute “Sell in May”

Markets opened on a strong note Tuesday following Monday’s observance of Memorial Day. Good news about the housing sector appeared to drive much of the gains. A closely watched indicator of home prices rose by more than 10% over the 12 months ended in March, the best gain since the housing downturn began in 2006. Also University of Michigan preliminary index of consumer sentiment rose to its highest level since July 2007—after housing prices had begun to decline but before the financial crisis erupted. A sell-off late Friday, which may have reflected some end-of-month profit taking by professional investors, accentuated what had been minor losses for the week.

However, as yields have stretched towards 2.20%, there is a gnawing fear that this may represent a breakout to the upside. Because actual inflation remains low and inflation expectations anchored, a sustained rise in yields would require evidence of stronger economic growth and a possible Fed response. Admittedly, recent data suggest the economy is improving, but not nearly enough to provoke the Fed. Stay tuned! See Below : “To Taper or not to Taper ?”

Equities: Equities were decidedly mixed. With interest rates being revalued, stocks are being revalued too. We haven’t seen the ‘great rotation’ (out of bonds and into stocks), but we are seeing rotation within the stock market itself. Most notably, the Nikkei dropped 5.7% after falling 3.5% last week.

Bond prices and bond yields move in opposite directions, and for about the last 30 years US government bonds have been in a long-term secular bull market, which means that interest rates have been falling. However, if the multi-decade bull market in US government bonds did indeed come to an end last year, it means that we have now entered a period in which bond prices will fall and yields (interest rates) will rise. Perhaps for years, or even decades. 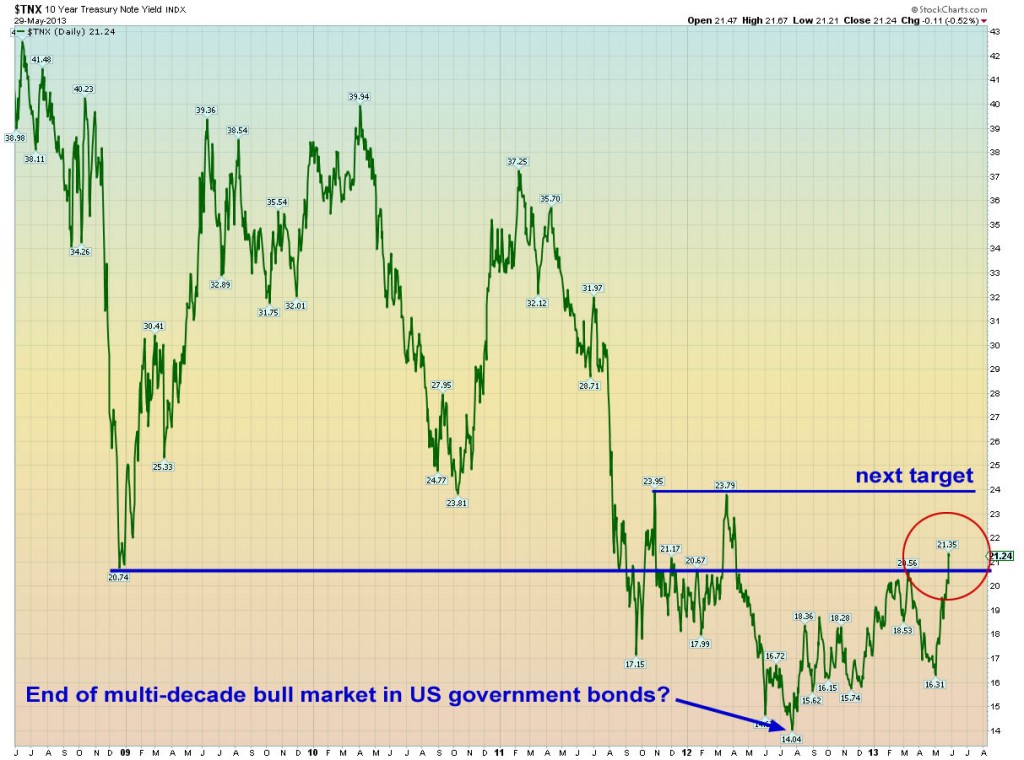 Currencies: AUD continues to weaken. It’s now down 9% in the past month and a half to its lowest since October 2011. The U.S. dollar on Friday fell to a three-week low against the Japanese yen, with the American currency notching an eighth straight month of gains versus the yen. Expectations of monetary easing moves by the Bank of Japan is expected to result in further softening of Japan’s currency.

Commodities: Ample supplies are keeping oil offered. Gold was higher as USD slipped. Gold futures are higher this week, trading at $1,393 an ounce in afternoon trading. See  below : Examining the HUI: Which gold stocks

“To taper or not to taper?”

That is the question on the Federal Reserve’s mind.  The upside for the economy has a potential downside for stock valuations, however, which appeared to be reflected in the market’s reversal on Wednesday. “Tapering” became the watchword of the week, as investors worried about the potential for the Federal Reserve to begin scaling back its asset purchases in response to further economic stabilization, a move that would allow long-term interest rates to rise. Treasury yields shot up in response, taking a particular toll on stocks that pay regular dividends, mainly in the utilities, health care, and consumer staples sectors.

Less monetary support from the Fed could result in weaker economic growth. What’s a Fed governor to do? Never fear… not 24 hours passed before bad economic news caused the market to rally anew. From yesterday’s AP wires: “The stock market rose Thursday after a pair of lackluster economic reports convinced traders that the U.S. central bank will continue to boost the economy with its stimulus program.”

In candid moments, former (or soon-to-be former) central bankers have a tendency to admit the truth: Quantitative easing (QE) is an addictive substance. Ben Bernanke must be getting tired. Who wouldn’t be? Having the entire global economy resting on one’s shoulders. It must be exhausting. We are confident of only one thing: Bernanke will make the wrong choice. Remember: The ultimate essence of fiscal and monetary stimulus amounts to borrowing economic activity from the future. As the future arrives, so does an economic slump. In the slump, many will call for another injection of stimulus. “Only this time, it must be even bigger,” economic advisers will say.

Here’s the key point: The Fed has manipulated the rate at which investors discount future cash income streams back to the present. And it has inflated stock prices using this tool, which can happen only one time. Just once! Plus, if the Fed ever tried to reverse course, it would quickly remove all the artificial pricing in stocks and bonds. What could the Fed do as an encore stimulus? Is it willing to get even more radical? Perhaps it is. But first, the Fed will watch the consequences of Bank of Japan’s bold policy — one that is causing curious tremors in the Japanese government bond market.

Central banks have steered global markets into uncharted territory. Those who declare that the journey will end in a universal wealth effect (“There is no alternative to stocks!”) are not thinking through the consequences. 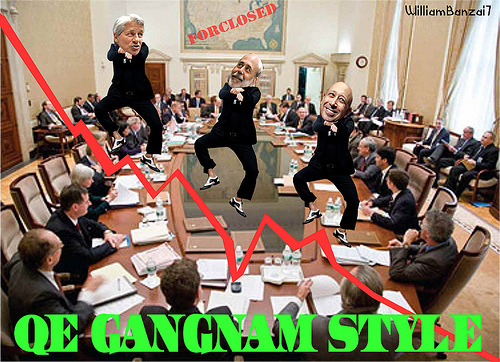 Less favorable data on other developed markets, particularly Japan, also weighed on sentiment. The Japanese market continued the decline that began the previous week and entered correction territory—commonly defined as a drop of more than 10%. Investors appeared to worry that the government’s economic reforms would fail to ignite real growth, especially if rising interest rates migrated from the U.S. and made monetary and fiscal easing more difficult. The market had soared since late last year, however, so many observers expected That a pullback would be at hand. European economic data were also disappointing, helping drive losses for the week in the region’s major markets.

No one knows when the price of gold might begin to recover. However, those that have studied monetary history know that the policies being pursued in the US and other G20 nations, eventually leads to devaluation of paper currencies, and therefore the long-term outlook for the gold sector remains positive.

Over the past six months the HUI index (also known as the NYSE Arca Gold BUGS index), which tracks the performance of the largest gold companies, has fallen by 42.8%. However, of the 16 unhedged gold companies that comprise the index, several have held up somewhat better.

The value of most mining companies is leveraged to the price of the metal/s they produce, and over the past six months the price of gold has fallen by 19.6%. As a result the HUI index has fallen by 42.8%. However, not every company has fared quite so badly. The chart below shows the price action of the HUI index over the past six months (red line). It also shows four companies that have fared somewhat better than the index. These companies and their percentage declines are: New Gold (-34.1%), Randgold (-29.9%), Newmont (-29.5%), and Goldcorp (-27.0%). 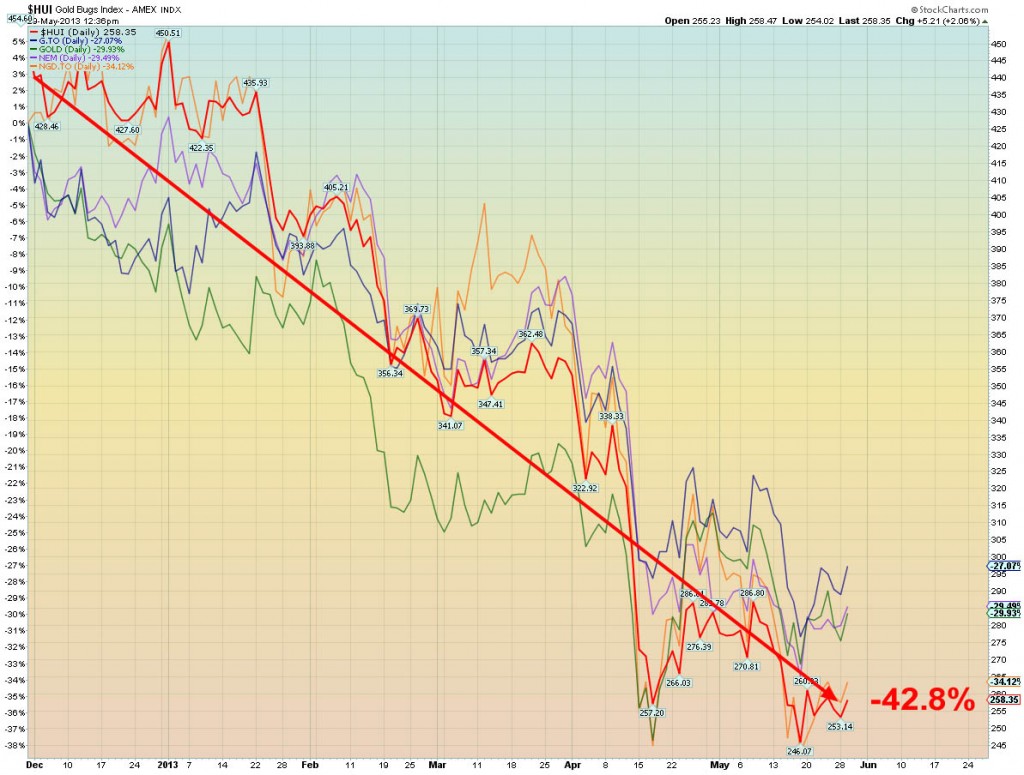 If we broaden our search to include some smaller-cap names as well as the royalty companies (such as Franco-Nevada which is down 26.2%), we find others that have also fared considerably better than the main gold stock index. What’s clear is that the market is placing a higher value on companies in safe geographical regions that have high profit margins, and it is these companies that are likely to outperform if and when gold begins to rise.