Weekly Market Review as of July 14

A Rally on Steroids 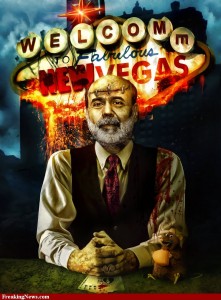 As we have argued before, markets appear to have missed three critical components of Bernanke’s tapering guidance. First, the timing and speed is ultimately data dependent. Second, tapering is not tightening. And third, tapering would not signal that actual rate hikes are imminent.

Regarding the third critical point, Bernanke made the crystal-clear argument this week that substantial policy accommodation would likely be required for quite a while.

We believe the Fed has drifted toward acceptance of tapering because of concerns about: 1) financial instability, 2) asset bubbles and 3) amassing difficulties for its exit strategies, not because economic nirvana has been reached.  The FOMC likely recognizes that economic strength is not ideally where they would like it to be, but they understand that $85 of monthly asset purchases has a greater impact on asset prices than it does on lowering the Unemployment Rate (UR).   Therefore, we believe the decision to taper at one of the next two meeting is almost a certainty.  “Data dependency” will dictate the length and pace of QE, but will no longer delay the tapering start date past the year. A tapering announcement would afford the FOMC the opportunity to get all members on the same, increase their flexibility going forward, and remove it as an uncertainty overhanging markets.

Equities:G7 equities were mostly higher on Bernanke’s reassuringly dovish comments. The exception was Italy, where equities slipped in the wake of another ratings downgrade of sovereign debt. Germany’s DAXK was by far the top performer with a 5.21% gain.

After three weeks as the top performer, Japan’s Nikkei came in last but with a respectable 1.37% gain. We are concerned that Abenomics is largely old LDP wine (of fiscal policy and easy monetary policy), even if on steroids, in new skin.  The structural reforms will exacerbate the surplus savings of Japan’s corporate sector without boosting wages or consumption.  We suspect that the international community’s tolerance of a weak yen may soften as the Japanese economy remains the fastest growing among the major economies. (see below)

The Shanghai remains the only index on the watch list in bear territory .

Bonds: Bernanke’s reassuring comments also brought down government bond yields. Hedge-fund managers and other large speculators increased their net-short position in 10-year note futures to the most since March according to U.S. Commodity Futures Trading Commission data. Italy was again the exception.

The rally over the past few years, after the huge declines in Real Estate, has been impressive to say the least. The 4-pack above reflects a variety of leading Real Estate indexes, ETF’s and one stock that is key to home improvements. What do they all have in common? After huge rallies they all formed bearish rising wedges with support lines being broken of late!

Commodities: Gold caught a bid on Bernanke’s perceived dovish tone. Oil (Brent) showed a modest gain but the US benchmark (WTI) rose more significantly, narrowing the spread to its lowest in nearly 3 years (currently around $3, down from as high as $28). US crude inventories are tumbling as the new pipeline infrastructure to the Gulf of Mexico comes on line.

Bernanke Sets Cat Among the Pigeons

Our view has been that the market was ahead of itself and we thought the tapering would come later. We have suggested, drawing insight from game theory, that the Federal Reserve would benefit by allowing the next head of the Federal Reserve to taper and thereby establish anti-inflation credentials that may be important in the coming years. That credential would be wasted on Bernanke, who will go down in history for using unconventional policies to ensure monetary policy was sufficiently accommodative to prevent the Great Recession from turning into (another) Great Depression.

Bernanke said several things that prompted the dramatic reaction, which took place not on a blank slate, of course, but in the context of market positioning that was inclined to see higher US interest rates and a stronger US dollar.  In fact, earlier this week, the Dollar Index rose to three year highs.  The euro had fallen to three month lows and sterling to three year lows.

Bernanke indicated that monetary policy would remain highly accommodative for the foreseeable future.  He indicated that jobs market may not be as strong as it looks, due to the decline in the participation rate and other measures of labor market that continue to show unsatisfactory improvement.

In a tip of hat to Bullard, the Fed President that dissented from the statement of the last meeting because it did not pay sufficient attention to the decline in measured price pressures, Bernanke said the Fed would defend its target from both sides (above and below).

He did reiterate that the Fed expected that some of the forces dampening price pressures would prove transitory in nature.  Bernanke also suggested it was too early to conclude that the economy has weathered the fiscal tightening.   Lastly, Bernanke warned that the Fed would push back if the market tightened conditions prematurely.

As Jens O. Parsson explains in his book Dying of Money, ‘Everyone loves an early inflation. The effects at the beginning of an inflation are all good. There is steepened money expansion, rising government spending, increased government budget deficits, booming stock markets, and spectacular general prosperity, all in the midst of temporarily stable prices. Everyone benefits, and no one pays.’ Japan is still very much in the early stages of this latest attempt to solve its problems via the printing press. Sooner or later however, the positive effects will turn to negative effects, and as O. Parsson points out, ‘In the later inflation, the effects are all bad.’ When will we learn that printing money does not create real wealth or lasting prosperity?

There are some signs that Abenomics is beginning to bear fruit. 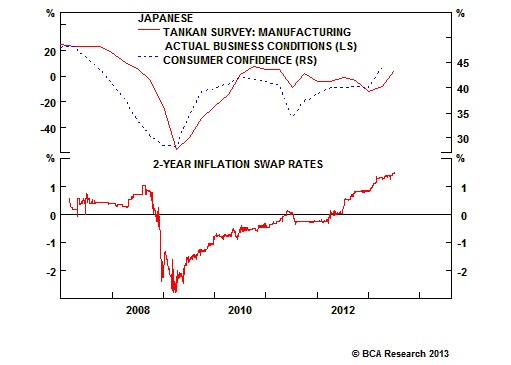 Although many have cast doubts over Shinzo Abe’s reform plan, there are emerging signs that aggressive monetary reflation is having a positive impact on the Japanese economy. Money and loan growth has reaccelerated, consumer confidence has risen and the Tankan business survey has also spiked.

Most importantly, financial markets seem to believe that the authorities will achieve their inflation target. For the first time in many years, inflation expectations in Japan have risen above 1%. In short, the Bank of Japan (BoJ) so far appears able to manage a revival in consumer and business confidence via a combination of large-scale QE program and a sharp yen devaluation. We see no reason why these positive trends will come to an abrupt end, so long as the BoJ maintains its policy

Failure would be equally significant. If economic growth does not pick up, then a combination of budget and trade deficits that require financing would affect the global economy. Japan’s overall current account may move into deficit as soon as 2015.

Japan would gradually run down its overseas investments, selling foreign assets and repatriating the capital. The selling pressure would affect prices and rates for a wide range of assets, transmitting financial market volatility.

At the same time, the Bank of Japan’s (BoJ) aggressive monetary policy and devaluation of the yen may lead to large outflows of private capital from Japan. Seeking yield and preservation of purchasing power, Japanese investors may move money into foreign markets, with destabilizing side effects.

In the 1990s, aggressive easing by the BoJ in the aftermath of the end of Japan’s bubble economy led to a large and rapid outflow of capital, fueling a rapid increase in debt levels especially in Asia. That was one of the factors underlying the Asian monetary crisis of 1997-1998.

There is now a heightened risk of a repeat of that episode.

The devaluation of the yen against other Asian currencies such as the Chinese renminbi and South Korean won boosts Japanese export competitiveness. But affected nations are forced to become “shock absorbers” to Japan’s attempted revitalization, through reduced exports and lower growth. This encourages retaliation from affected nations. Facing a reduction in competitiveness, China, South Korean and Taiwan may intervene in foreign exchange markets to reduce the appreciation of their currencies. Trade restrictions may be introduced to reduce Japanese exports.

In seeking to offset the effect of aggressive Japanese monetary policy, affected countries may be forced to reduce rates, leading to an over-expansion of credit and increasing the chance of subsequent debt crises.

But ultimately, Japan’s significance lies in the fact that it is a laboratory for the global economic and financial crisis. Japan’s predicament has marked similarities as well as some differences with that in many developed countries. In both its policy successes and failures it may provide a useful guide to the fate of other troubled economies and policy prescriptions.

Prime Minister Abe’s agenda is rooted in history. Japan’s obsession has been to become and to be recognized as a first-ranking country — itto koku . Japan went to war to avoid being reduced to a second-rate or worse country. In the aftermath of its defeat in 1945, the term yonto koku (meaning fourth-rate country) was widely used to represent Japan’s surrender, decline and humiliation. Current initiatives, which Prime Minister Abe sees as reversing economic weakness, are a part of a process of the restoration of Japan’s national status and security,. The policies are oddly reminiscent of an old slogan from the Meiji restoration, fukoku kyohei — “a rich country and a strong army.”

The Prime Minister’s agenda includes constitutional changes to overturn Japan’s Western-imposed constitution. He has signaled an increase in defense spending and wants the abrogation of its limits to self-defense. He wants to recreate a nostalgic imperial idyll, based on military and economic strength. The current territorial dispute with China is part of this larger narrative.