Weekly Market Review as of August 26

We believe much of the world is addicted to cheap money and remains vulnerable. 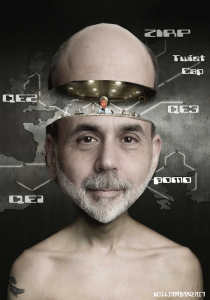 But how do you wean someone off an addiction? As the Fed is learning, it’s not easy. Most notably, “fine tuning” the process may be all but impossible. In the meantime, as the market is at risk of tantrums, the Fed is focused on its dual mandate to foster price stability and maximum sustainable employment. As market volatility itself is a headwind to economic growth, it’s another indication that the Fed may need to err on the side of easy money.

And indeed, the minutes highlight a goal to complete the tapering (and thus end new asset purchases) when the unemployment rate falls to the neighborhood of 7.0%, which is expected by the middle of next year. Given that the unemployment rate frankly is not that far away at 7.4% (as of July), many investors may be reasonably working backwards to conclude that not only is tapering likely to begin before yearend, but a start at the next meeting on September 18 is quite plausible.

We expect the following implications:

Equities:  G7 equities were mixed with significant headwinds evident from the continued rise in rates. The week was another mixed bag but with a somewhat more negative skew compared to the week before. We also saw the top and bottom performers reverse positions from the previous week. The S&P 500, down 2.10% the week before, was the top performer this week, although it with a rather modest gain of only 0.46%. The Hang Seng, up 3.26% the previous week, gave back most of those gains with its 2.91% selloff this week. France’s CAC 40 was the second worst performer with its 1.32% loss. Trading was interrupted on the NASDAQ exchange, reportedly because of a technical glitch. 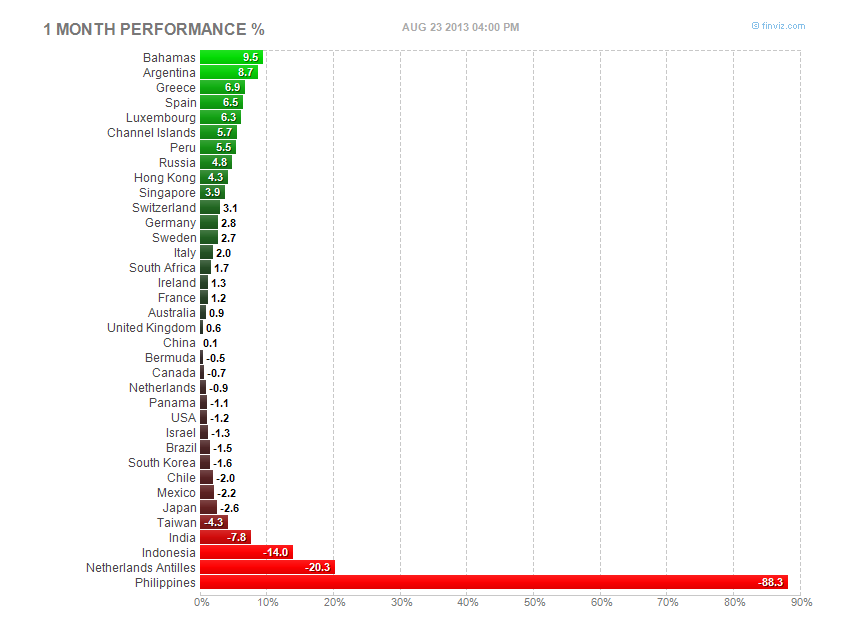 Emerging markets started last week with continued sell-off from the fear of Fed QE tapering. They recovered a bit Thursday and Friday on strong manufacturing data that came out of China, U.S. and Euro zone. Regardless, The iShares MSCI Emerging Markets Index ETFended the week 1.7% lower. The Fed is not helping out with volatility. Its official rebuffed calls to take into account the threat of emerging markets fallout from QE tapering, saying U.S. monetary policy is driven by U.S. interests only. Our mandate is only applicable to maintain the health of the US.  Go fish. Let’s emphasize the best response to that : From Christine Lagarde, head of the IMF.  “Watch out that your arrogant response doesn’t go full circle … and come back to ite you on the bass.” A must Read : Fed Officials Rebuff Coordination Calls as QE Taper Looms

So looking ahead, emerging markets will continue with roller coaster rides. There will be hits and misses, handsome rewards and teary eyes. EM won’t be for faint hearts.

Bonds: Good news is increasingly bad news for bond markets, as investors look at improving economic data through the lense of worrying about when central banks will begin backing away from their substantial policy accommodation. In the US, speculation continues that tapering could begin as soon as September 18. In the eurozone, there is even speculation that the ECB could soften its newly adopted forward guidance on rates, most likely backing away from the possibility of further rate cuts. Benchmark government yields were broadly higher most of the week, but caught a bid on Friday as the conviction for early tapering seemed to wane.

Currencies: AUD and CAD both approached their weakest levels in 3 years. JPY also weakened significantly, and India’s rupee dropped to a record low. In contrast, EUR is holding up well.With a few exceptions, capital leaving Emerging Markets and flowing back to Developed Markets. 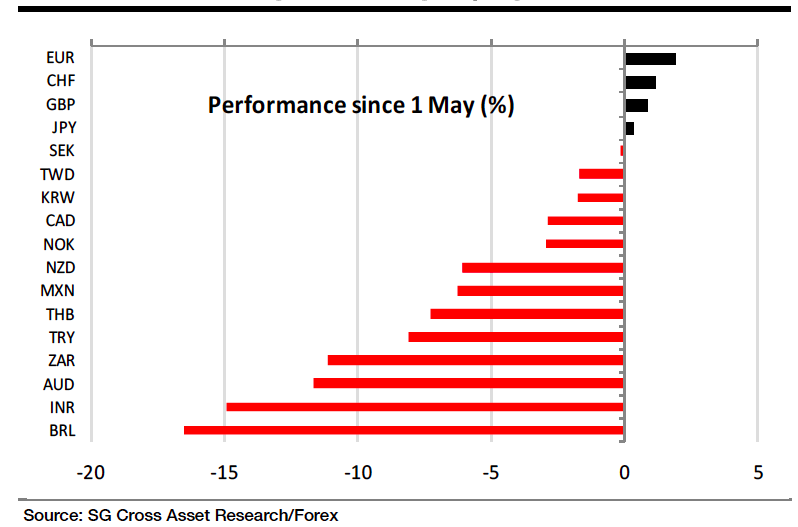 Commodities: For Oil, WTI tumbled even as inventories fell, opening up a sizable spread with Brent, which edged higher. For the first time since early June, gold has crossed the psychological $1,400 level. However, it remains well down on the year. 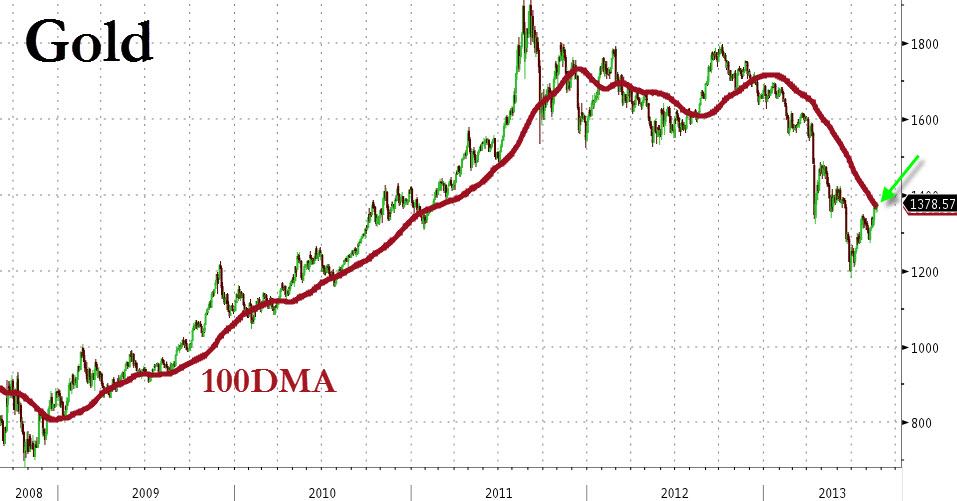 A high degree of caution in managing investment portfolios is warranted at this juncture. For if the Fed does decide to go ahead with scaling back its QE asset purchase program starting in September, the recent decline in stocks may only be the tip of a very large iceberg. 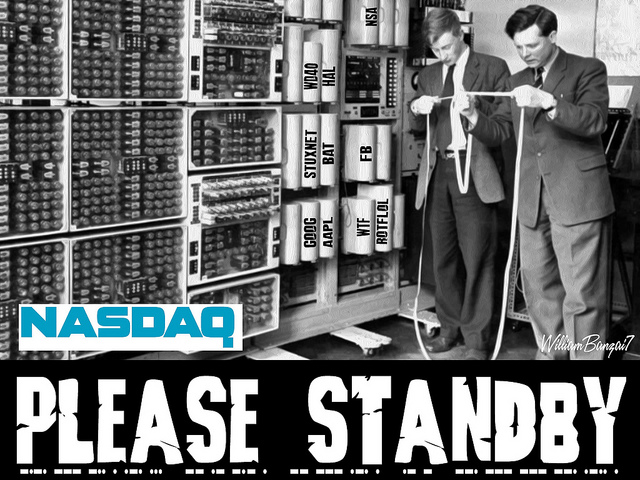 Traders continue to focus on the minutiae of Federal Reserve minutes and the timing of the Fed’s likely moves in the bond market. Ordinary investors should focus on the bigger picture. The Fed has announced that the era of quantitative easing, and aggressive manipulation of long-term interest rates, is coming to an end.

See our blog :  THE MATRIX

Ultimately this unprecedented tsunami of money has failed to fix the crisis. Instead, it has created a vast and as-yet invisible risk of collapse of the state/central bank system itself. The present borrowing and spending tsunami rather than rely on private savings being invested in Treasury bonds (debt), the central bank (Federal Reserve) creates trillions of dollars which it uses to buy Treasury bonds and home mortgages: 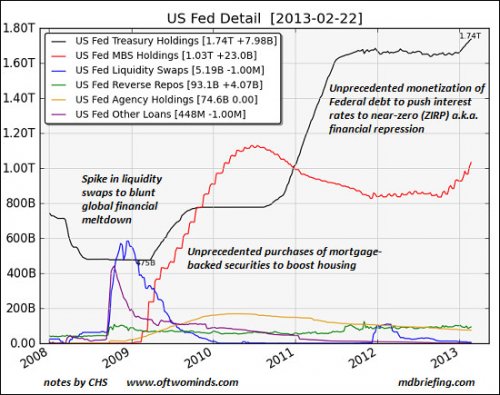 By concentrating systemic risk into the state, we have not extinguished risk; we have only pooled it into a reservoir dammed by one barrier: the state’s ability to borrow and spend virtually unlimited amounts of money.

All of this might help to explain why we have seen the prices across so many asset classes come off sharply in recent months. For the transition from asset purchase dependence to the stark reality of eventual withdrawal of stimulus and potential pricing instability stands to be a challenging experience not only for stocks but investment markets in general to say the least. The following is a list showing the magnitude of the corrections from recent peaks across key asset classes since the beginning of May when the indication that Fed asset purchases may soon be drawing to a close first surfaced:

Clearly, the damage across asset classes has been both deep and widespread. And the extreme damage to gold (GLD) and silver (SLV) going back to January has also been well documented. But one category is conspicuously missing from the list above. It is the U.S. stock market, of course, which is down less than -4% on the S&P 500 Index from its all time high reached only a few weeks ago. 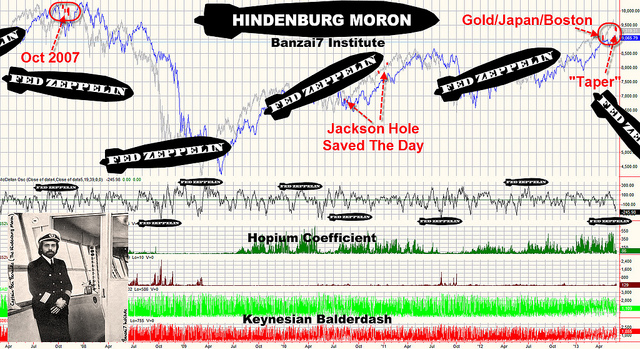