Weekly Market Comments as of June 30 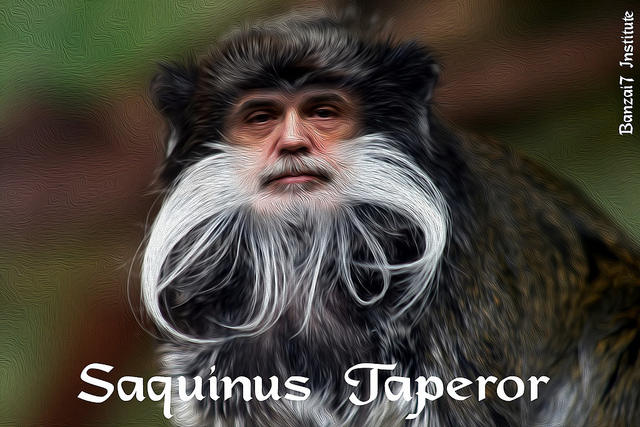 This week calm was restored when it became clear that the Fed wanted to convince that Chairman Bernanke’s signal that the tapering of asset purchases might begin later this year interpreted by many as, “the Fed was heading for the exit” and tighter monetary policy was imminent,  was a misinterpretation, and dispatched a number of Fed Presidents and Governors—doves and hawks alike—to provide some clarity on the issue.

First, the timing of tapering is not written in stone and is data dependent. Indeed, if the improvement in the economy and the labor market fall short of expectations, tapering would be delayed, dragged out longer, halted or even reversed. Second, tapering does not represent a tightening of the stance of monetary policy. In fact, policy would continue to become more accommodative as the Fed’s balance sheet continues to grow, albeit at a slower pace. Third, and perhaps most importantly, tapering does not signal that actual policy tightening is imminent. 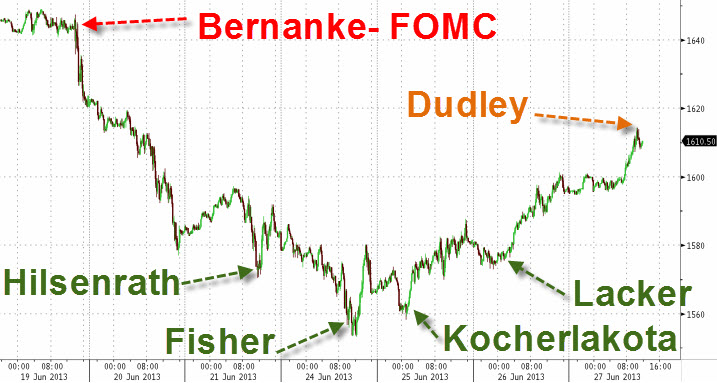 A key lesson from this episode is that the Fed still needs to do a lot of work to improve its messaging. To be sure, some have argued that this “tightening scare” may have served a useful purpose of wringing out some of the excesses that have likely built up in markets. However, as we opined last week, difficulty by the Fed in signaling its intentions clearly could prove far less constructive and far more painful as we get closer to actual policy tightening.

Equities: Equities were mostly higher this week as risk appetites improved in the wake of efforts by several Fed officials to reassure markets that tighter monetary policy was not imminent.  Finally, emerging market equities and commodities continued to underperform, reflecting slower growth in many major EM economies. Although the economy and markets have overcome many of 2012’s risks, recent market -5% volatility may be indicative of an eventful second half of 2013. A rush of Japanese economic data published Friday painted a mostly upbeat picture for May, with industrial production making a particularly strong showing. Industrial output rose 2% during the last month.

Even so, G7 equity performances for Q2 overall was decidedly mixed with shares up strongly in Japan, moderately in the US and Germany, flat in France, and down in Canada and Italy. Equities were also down in Q2 for Australia and emerging markets overall.

Bonds: G7 government bond yields generally stabilized this week as Fed officials pushed back against what many of them saw as an over-reaction to Bernanke’s guidance on tapering. However, this still left yields sharply higher for Q2 and year-to- date across the G7, although Italian spreads have benefited from improved risk appetites. Perhaps the one that surprised the most was the dramatic rise in yields on inflation linked bonds, outdoing the rise in yields seen  on  conventional  bonds.  To  be  fair,  the  dramatic  sell-off  in  bonds began right at the start of  May when  T-Note  yields  bottomed at 1.63 percent, well  ahead of Bernanke’s speech last week.

The bloodbath in the bond markets has led some commentators to see this as the end of the long bull  market.  Indeed,  a  recent  Bloomberg article  headlines  an  impending  “lost decade for bonds”.

Perhaps the one that surprised the most was the dramatic rise in yields on inflation linked bonds, outdoing the rise in yields seen  on  conventional  bonds.  To  be  fair,  the  dramatic  sell-off  in  bonds began right at the start of  May when  T-Note  yields  bottomed at 1.63 percent, well  ahead of Bernanke’s speech last week. 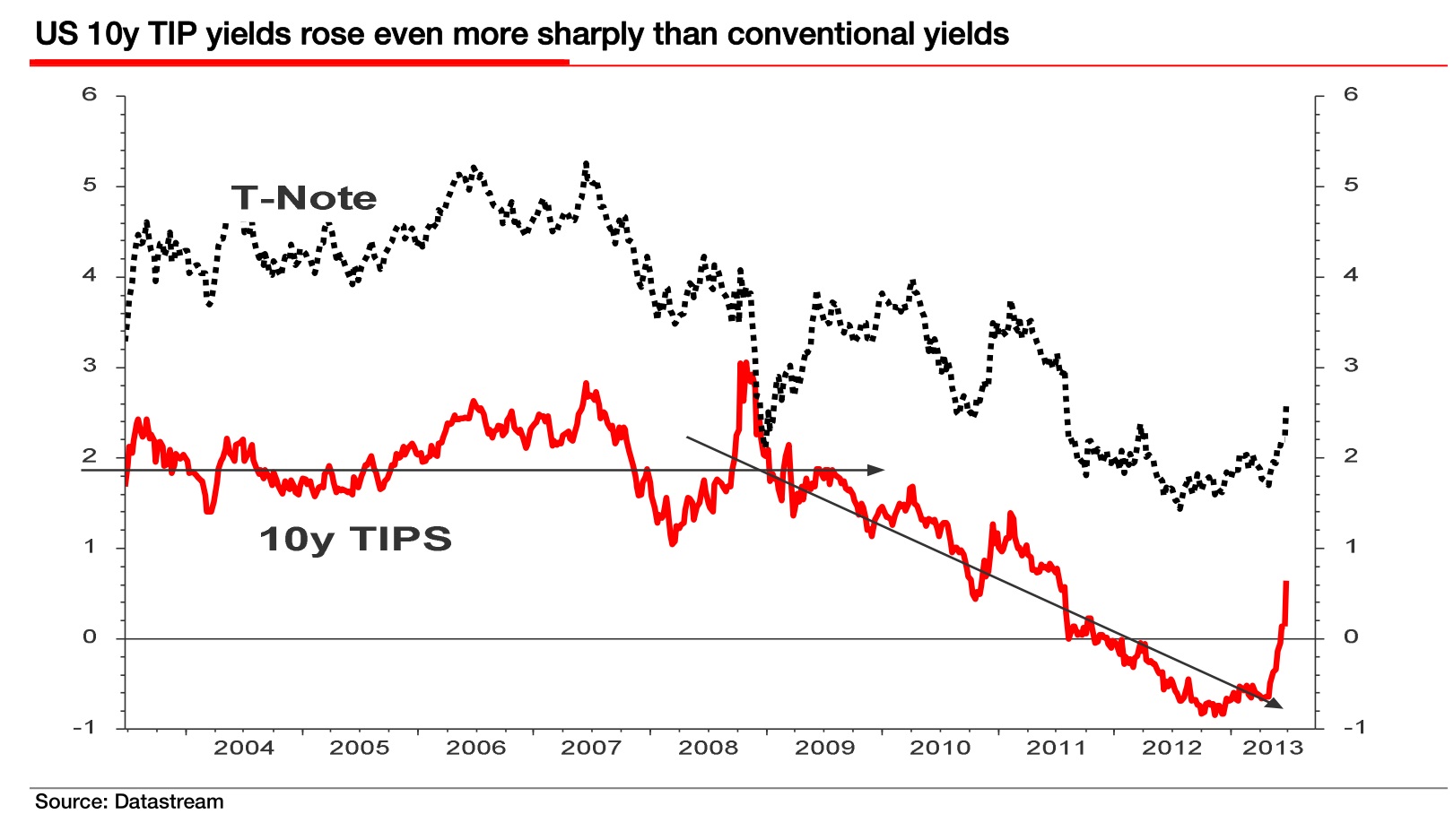 Currencies: Even as Fed officials flashed more dovish signals, USD remained bid, perhaps reflecting China worries. The AUD remains chronically weak. It was above 1.05 in mid-April. Now it is flirting with 0.90.

Commodities: Dollar strength continued to weigh heavily on gold. The metal flirted with $1200 per ounce this week, down more than 35% from its peak, and its lowest since the summer of 2010. In contrast, oil found a bid, likely reflecting some supply concerns and perhaps greater optimism on US growth.

We note that, amid the carnage in the government bond market, implied inflation not only remains subdued but has fallen decisively. Maybe that reflects an acknowledgement that the economy is indeed nowhere near exit velocity. Certainly the divergence between the ISM and inflation expectations has been unusual and history suggests it is inflation expectations that eventually catch up with the economic reality … And with events unfolding in emerging markets as they are, I see a good chance of a repeat of 1998 where a deflationary wave of manufactured goods washed up from Asia. Deflation risks remain high.

Despite  Bernanke  having removed much of that uncertainly, the bond markets (and much else besides) certainly did not  like  what  they  heard.  Indeed  the  bond  rout  occurred  despite  some  commentators describing Bernanke’s  speech  as  rather  dovish  in  making  clear  very  robust  economic prerequisites  for  tapering.  But  amid  the  six-week  sell-off  ahead  of  last  week’s  speech,  a considerable head of bearish steam had already built up – with it morphing into red mist and clouding clear vision, the “feral hogs” in the bond markets charged.

Societe Generale strategist Albert Edwards to pose the question in his latest market commentary: “Is the Ice Age over?”
The “Ice Age,” a term Edwards uses to describe a series of economic cycles characterized by “lower lows and lower highs for nominal economic quantities,” driving a “re-rating of government bonds and the de-rating of equities – each recovery bringing a partial reversal to the process and each recessionary phase taking us to shocking new lows, both in bond yields and in equity multiples.  So, for example, in the chart below we see progressive steps down in each cycle ? almost unnoticed unless you take the longer view.

He asserts that deflation risks remain high. He points to persistently low inflation, which the Fed has seemingly dismissed as transitory, and the crisis unfolding in emerging markets right now, which he says present a “good chance of a repeat of 1998 where a deflationary wave of manufactured goods washed up from Asia.”

The recent surge in bond yields was driven by a sharp rise in real yields, implying a sharply reduced outlook for inflation in the marketplace. Edwards doesn’t see that as sustainable, and given his outlook for weaker economic data in the future, he doesn’t see any way the Fed will be able to ease off the QE pedal. And that will eventually force yields back down again. “Indeed, let’s put the recent bond sell-off into a longer term context. Bond yields at 2.5% still remain locked in a technically well-established bull trend that will not be broken until yields spike above 3.5 percent,” writes Edwards.

So where does that leave us in terms of QE. Edwards fully concurs with the legendary Marc Faber :

“If you say that if he means what he says, then you believe in Father Christmas. He said if the economy does not meet the expectations of the Fed in one years’ time, they will consider additional measures. In other words, if the economy has not fully recovered by mid-2014, more QE will be forthcoming.”

Gold and Silver appear to be in the process of finding a bottom; however, the price action could continue to be choppy in the coming weeks. Ultimately as the following charts suggest, expect both precious metals to move much higher in the long term with the potential for Silver to be the outperformer, as was the case from 2008 to 2011. 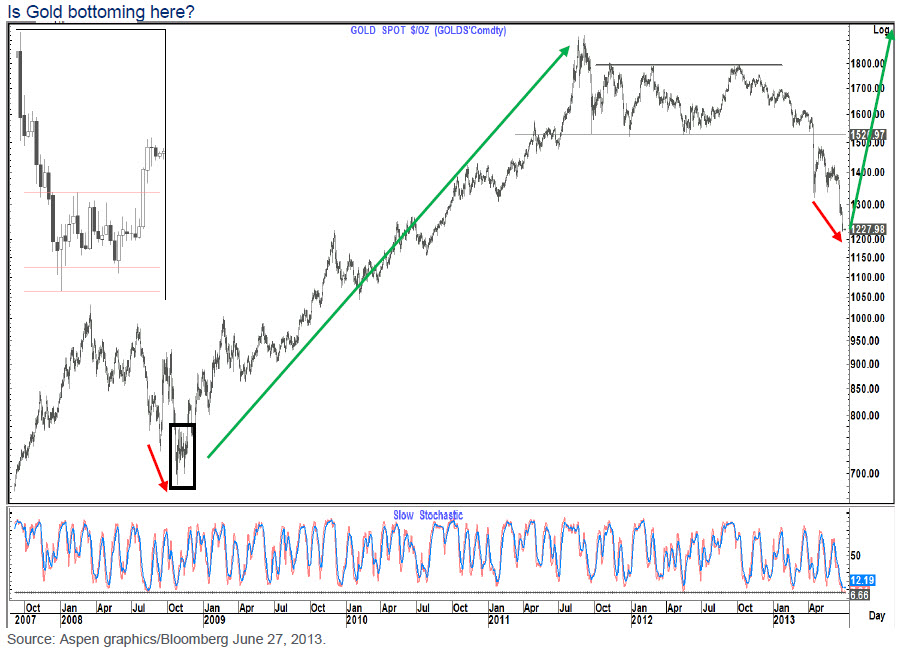 As we have previously seen, moves higher in Gold are accelerated by either:

One interesting comment by C.B. Worth from Oppenheimer :”No new thoughts : Sell ”