This time it is different ! LOL 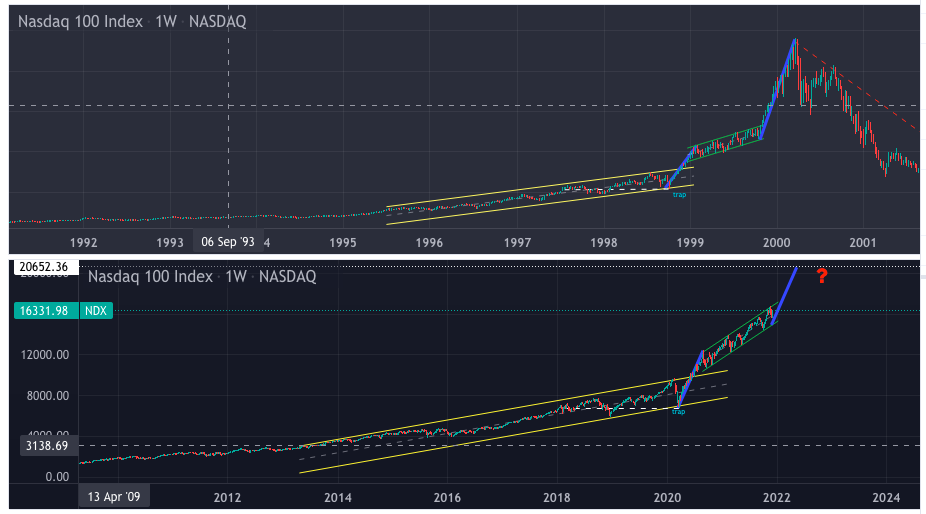 The chart above shows NDX during the Dotcom bubble and now. As you can see, the pattern looks identical in appearance even though the macro-environment differs greatly.

During the first upward channel, credit is just starting to expand and companies grow there earnings , revenue, sales and multiples. It is an economic expansion. For example during this time period the P/E ratios of the general market trended upward. In general the economy expands in a healthy fashion. (yellow) This period usually ends with high volatility causing many investors to scream “Armageddon”. (1997,1998; 2018,2020) Retail is usually hit the hardest during this time. Next we see a frenzy of buyers come in and buy the correction (blue). Usually this is made up of institutional investors. Retail investors start to pay attention and try their hand in the market just as the market stop to move impulsively and instead move in an upward channel (green). Finally, when it seems impossible for stocks to go down, greed becomes contagious. Investors take more risks and become addicted to the gains. (blue).

There are some very major differences between the 90’s and today.

In the 90’s people were actually happy and optimistic. Opportunity was everywhere. If you didn’t have a job; you could go to any major city and find odd jobs as a paper boy, advertiser, etc. Someone was always looking for an extra hand to help them make more money. Technology wasn’t replacing workers, more opportunities were available. The US was a titan on the global stage; a nation that did not ask but demanded the respect of the world. In 1986, the fed increased rates to normalize prices; causing the economy/markets to slow. Then in Q2 of 1991, the fed cut rates every quarter for 5 quarters leading to the boom of the 90’s. Clinton in 93 passed the Omnibus act which increased the tax rate on corporations and the wealthy; leading to: a decrease in public debt to GDP, more money for government projects and allowed for middle class Americans to thrive!!!

On the other hand, you have 2008 to now. This increase in the market was not caused by an increasingly productive economy or a stronger consumer. Instead, it came about from the government’s attempt to remediate a broken economy torn apart by the GFC . Obama followed in Bush’s footsteps and continued to decrease tax rates and increase government spending causing the public debt to GDP to increase drastically. QE also started at this time. Trump followed Obama with more tax cuts and more military money. Trump killed globalization with his “America First” policy. Wealth inequality skyrocketed and investors did not have much fate in the markets.

Do you think history will repeat itself? Will the differences in the economic landscape prevent another impulse move from happening? lmk