The Swiss Version of Global Warming

“Even considering its many recent international difficulties, Switzerland remains as one of the best all-around asset and financial havens in the world.”

That statement refers to my considered opinion of Switzerland as a place for investment management, annuities and insurance – all aspects of sound asset protection. For these, the Swiss are still best in my view. But I must say it is getting more difficult to defend what the government of Switzerland is doing to clean up what their nervous politicians apparently perceive to be the country’s international image as a dirty money center that caters to the filthy rich.

Two years ago, in what amounted to a retroactive confession, Switzerland’s governing Federal Council went so far as to announce officially that it no longer wanted “undeclared, untaxed funds from overseas.” They promised to act to “regularize untaxed assets” in Swiss banks and keep out new, untaxed cash locally known as “Schwarzgeld,” or black money.

What prompted such a mea culpa was the major crisis produced by years of secret collusion on the part of the inept banking giant UBS, who conspired with several thousand of their American account holders.

Exposed by the U.S. Internal Revenue Service and indicted by the U.S. Justice Department in 2008, UBS faced closure of its American branches with over 20,000 employees. UBS was forced to admit its guilt. Worse still in the eyes of the world, Switzerland’s traditional reputation for financial integrity was badly damaged.

The horrendous damage done by the UBS scandal only multiplied when, later, a total of nine other Swiss banks came under what is still a continuing investigation by the IRS.

The political response by the governing Swiss Federal Council and the parliament, under heavy pressure from Swiss bankers, in effect repealed the Swiss Bank Secrecy Law of 1934, a law that always, and to this day, has had solid majority support among the Swiss people. It was this law that attracted the trillions in assets Switzerland held and managed for the world.

So much for Swiss bank secrecy – yes, it is still alive, but in a much weakened condition. 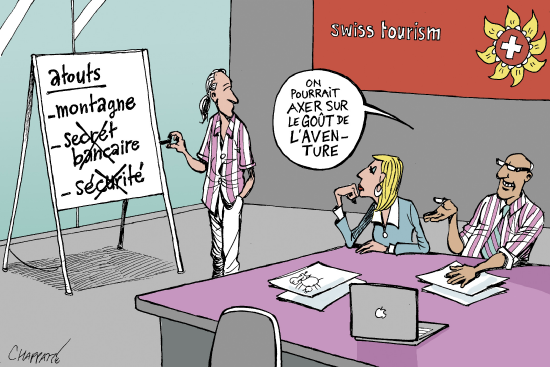 Swiss Marketing : “We could promote the sense of adventure…”

Now the second blow has landed: A special Swiss tax break for wealthy foreign residents that dates back to 1862 is under serious attack.

Under this lump sum taxation system, known in French as forfait fiscal, foreigners paid an average US$78,400 in annual taxes in 2010, earning Switzerland the tidy revenue sum of US$710 million. Resident foreigners are allowed to negotiate a fixed tax rate based on their Swiss property, but excluding their non-Swiss income.

Of the 7.9 million people in Switzerland, there were only 5,450 people in the forfait system at the end of 2010 – over 33% of those French. In the group is Formula One racing driver Michael Schumacher and pop-singers Phil Collins and Tina Turner, as well as French rock star Johnny Hallyday.

Forfaits have caused resentment among the Swiss because the top income tax locals must pay exceeds 40% in cantons such as Geneva. Since 2009, five of the 26 Swiss cantons have repealed the break, while another five have kept the tax break but increased the taxes on foreigners.

So bank secrecy is gone and rich foreign residents will be taxed more. What’s next?

What’s next could really be a tax bombshell that will hurt the Swiss economy badly – if it is allowed to happen.

Under Switzerland’s federalist system, each canton has wide powers to set individual and corporate taxes that are paid to both cantonal and federal authorities, but at different rates.

For years, the EU bureaucrats have been demanding Swiss authorities end the practice by some cantons that exempt company profits generated in EU countries from taxes, claiming this violates a 1972 free trade treaty. The average cantonal preferential tax rate for “special status” companies that earn the majority of their profits outside of Switzerland are taxed at a very low 11%. Firms that do not get such treatment end up paying around 24% in taxes.

Indeed, combined Swiss corporate taxes are less than 30%, the second lowest in Europe, and the envy of its high-tax neighbors Germany (51%), France (66%) and Italy (76%).

Yahoo, Google, Procter & Gamble, Colgate-Palmolive and Kraft Foods have all elected to site their European headquarters in Switzerland after leaving the high-tax U.K. Geneva is now the leading center for world oil trading, and companies in Zug have a large share of the international minerals and metals markets.

Once again, the EU is putting pressure on the Swiss government to end “unfair, uncompetitive” cantonal corporate tax practices that attract so many foreign firms.

The Confederation of Switzerland and its people are survivors, and rich ones at that. This nation manages nearly one-tenth of the world’s offshore cash and assets, over US$4 trillion for people all over the world, and they have done this successfully for centuries.

Justified by the avarice of UBS, the U.S. government’s hyper-legal assaults on friendly Switzerland may be the worst foreign attack since 1798, when the French revolutionary army overran the country and Napoleon forced the creation of modern Switzerland.

Despite two World Wars, for 214 years, as nearby European empires rose and fell, Switzerland’s official neutrality, defense of its sovereignty and banking prowess have created a world-recognized island of financial stability.

Napoleon did the Swiss the favor of unifying a nation. The French and German tax-hungry marauders and the OECD may have done the favor of spurring needed modern Swiss banking reforms.

I believe that the Swiss, far more than their politicians, will have the courage to withstand future radical demands for unneeded compromise.

The new Switzerland requires some mental adjustment for those who know its past, but it still remains the world’s leading offshore center in every area you may need to grow and protect your wealth – a strong currency, private banking, insurance, annuities and excellent investment management.