Do we deserve a Christmas Rally? 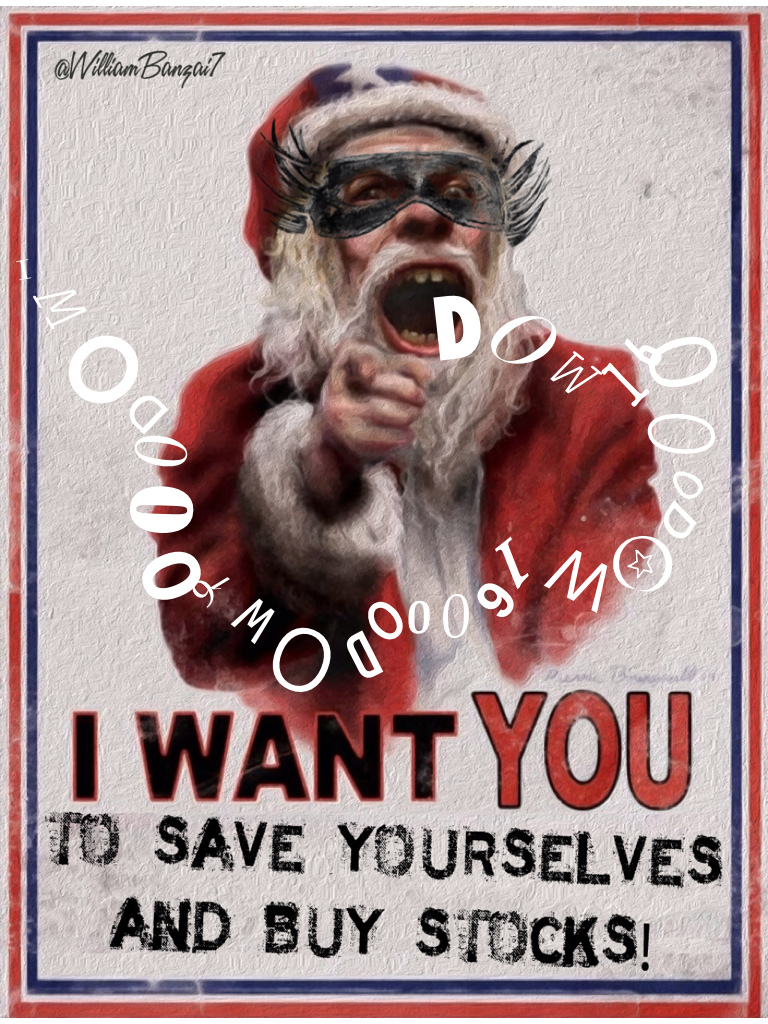 According to ShopperTrak, total Black Friday traffic plunged 11% and total sales fell 13.2 the second consecutive year of declines following last year’s 1.8%.  If somehow the scramble to open stores earlier and earlier on Thanksgiving day and punching people in the face just to get that 42 inch, 2010-model Plasma TV for $99, was supposed to boost overall sales instead of merely pulling them forward (see cash for clunkers), it didn’t work. 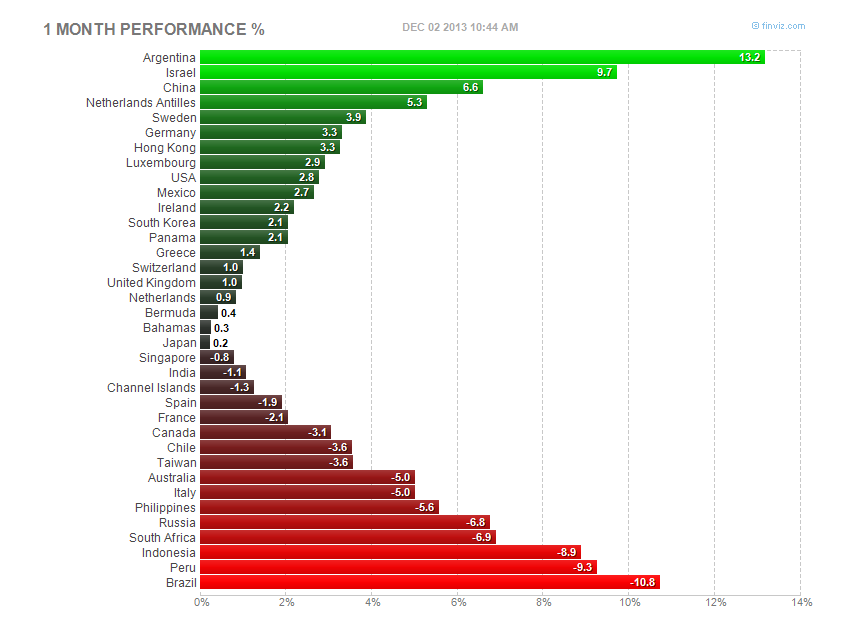 Bonds: The 10-year U.S. Treasury yield was unchanged at 2.75% and the 10-year TIP yield rose 4 basis points (bps) to 0.60%. Overseas, sovereign bond markets were generally quiet, despite rating changes for a number of Eurozone sovereign issuers

Currencies: The Yen was weak again, as were Emerging Market currencies.

Commodities: WTI oil ended the week down about 2%; Gold ended up about 0.5%. 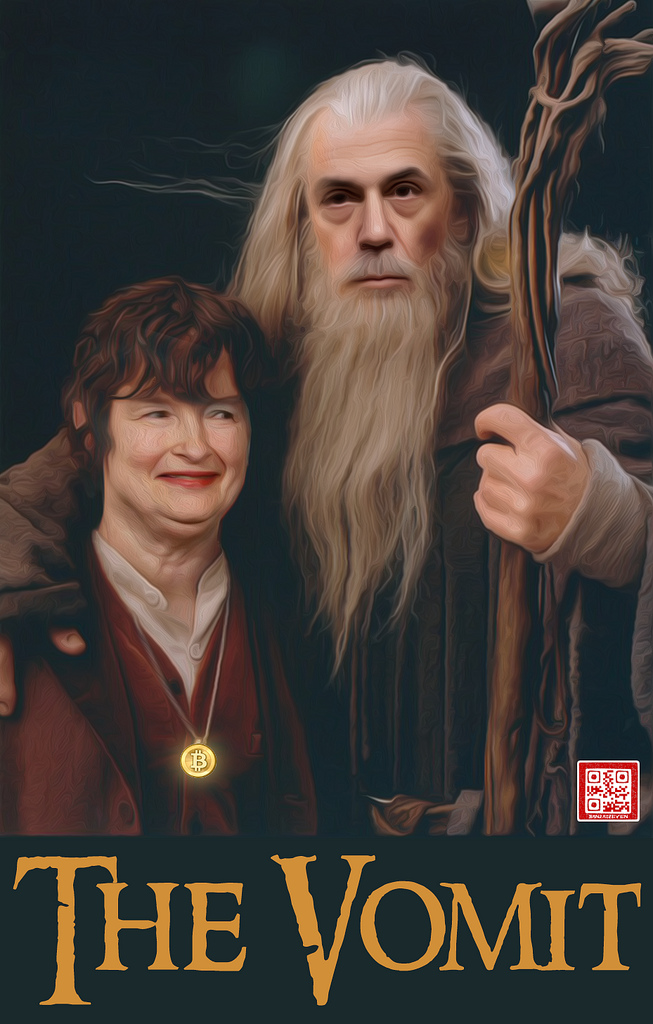 On Monday BTC has rallied 26% off its lows in the last 55 minutes. From it’s gold-matching highs at $1242 on Thursday night, the price of Bitcoin has collapsed over $400 (32%) to $840 on heavy volume. Of course, this is only a one-week low for the exuberant digital currency but still a significant plunge (as its smaller brethren Litecoin has collapsed 51% from its highs). Interestingly, this drops the price of Bitcoin in USD below the ‘arb’-based price of Bitcoin in China ($965). It seems, all coincidence aside, that the BIS infamous plunge-protection-team has been re-trained…SEE Below “Bitcoin, Gold and Tulips”

The window is closing for a gold (and silver) trading rally.

Gold prices have failed to rally from deeply oversold conditions. Moreover, this does not simply reflect dollar movements. The advance/decline line for gold in various currencies also is falling. 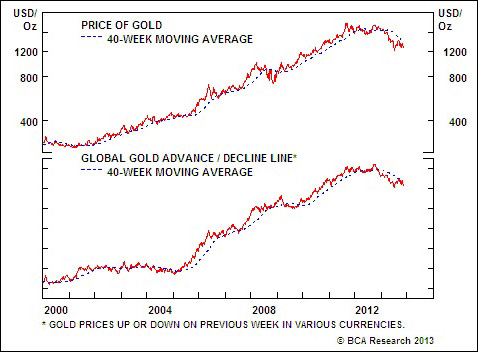 I had been expecting countertrend rallies in gold and silver. Nevertheless, there are too many underlying negatives to offset the near-term boost from generous monetary conditions around the world. The equity risk premium is shrinking. The Fed is considering tapering bond purchases, likely in March or sooner. Inflation expectations are tame around the world. The “Iran tail risk premium” has fallen in the wake of a preliminary nuclear deal with the West.

Obviously, there are scenarios under which gold and silver will rally. For example, disinflation may be bad for gold, but deflation would be a game-changer. Outright deflation in the U.S. and other major countries would spur another burst of monetary experimentation and quash “taper talk”. Granted, there have been signs of weakness in U.S. mortgage applications and durable goods orders. However, we do not assign high odds to this scenario given the easing of fiscal restraint in the U.S. and Europe next year.

Now Gold is hitting another 30-year Fibonacci extension level highlighted above, yet sentiment is much different than the last time a key Fib level was hit. Not only is a long-term Fib level in play again, but also two support lines meet at this key Fib level.

Could this be an important level for Gold? Yes, Yes & Yes! Gold needs to hold at this support set up, or a key break will take place — one that would not only impacting short-term traders, but also long-term holders of gold as well. If support fails to hold here, long-term holders of Gold will want to consider hedges!

While gold languishes, bitcoin is shooting higher. Can the digital currency keep its momentum, or will gold recover on a bitcoin collapse?

In January, bitcoin was trading around $13. By November, it was at $200, and it had soared past $1,200 by Thanksgiving before backing down. Is bitcoin the wave of the future, or nothing more than digital tulips? One look at the chart says the present is fraught with extreme risk that cuts both ways. 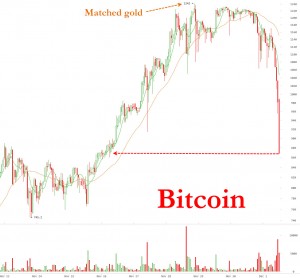 If you recall the initial public offering of Netscape two decades ago, or even of Google one decade ago, early trading in a true innovation can be quite frenzied. Prices increase at geometric rates. In today’s marketplace, bitcoin seems to have taken that dynamic to the limit with a near-vertical ascent and a host of analysts crying “bubble.”

Briefly last week, the price of bitcoin exceeded the price of an ounce of gold. While it makes for great headlines, the comparison is not any more valid than comparing gold to the level of the Standard & Poor’s 500, or apples to wildebeest. None of it makes sense. You cannot hold an ounce of bitcoin on your hand.

But the hoopla over the event did underscore the sentiment now surrounding this market. I am not commenting on the viability, liability, or buyability of a new system of money, but only the technicals surrounding it. Even though the public is largely unaware of this market, those investors involved with it show an extreme level of bullishness. Extreme bullishness creates an environment where any bad news can be devastating to prices.

Gold, as mentioned, has been suffering, and whether bitcoin has played a role is up for debate. The trend has been down for nearly two years and it is hard to make a case from a simple price action perspective that this market is close to turning around for the better (see Chart 2). But in a strange twist, the new love for bitcoin and its spawned additional dislike for gold may be just what will change the metal’s fortunes for the better. 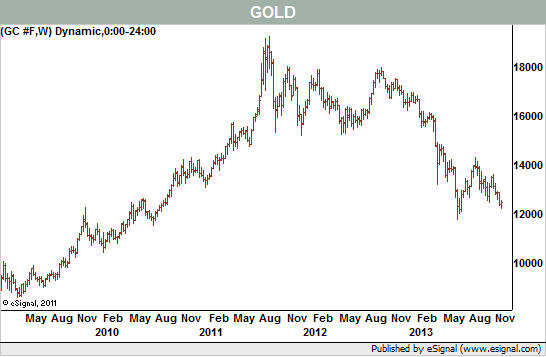 Without inflation, war, a sinking dollar, or intense demand for the commodity – traditional conditions under which precious metals flourish – gold has shed all but its most devoted fans. Sentiment is as dour as ever, so the idea that bitcoin is putting in the final nail in the coffin could create a contrarian’s dream setup in the near future.

But sentiment is merely an environment. Only price action can set a buy trigger, and for now, the few remaining gold bugs will have to wait.

Perhaps bitcoin, not gold, is indeed the future of money. But given that the bitcoin parabola is similar to that of the Dutch tulip bulb mania in 1637, (See Chart 3) the dangers of buying into a bubble are the same as attempting to sell it short. It could double from here just as easily as it could fall by half. Timing must be perfect with these levels of volatility and risk.

Investors might consider waiting for a significant shakeout in bitcoin before taking the plunge. Or they can follow gold lower as they wait for a spark that triggers a massive short squeeze as bears rush to cover their bets.

On the charts, both markets seem to be at critical levels, where major reversals or major accelerations – up for bitcoin and down for gold – may be in the offing. 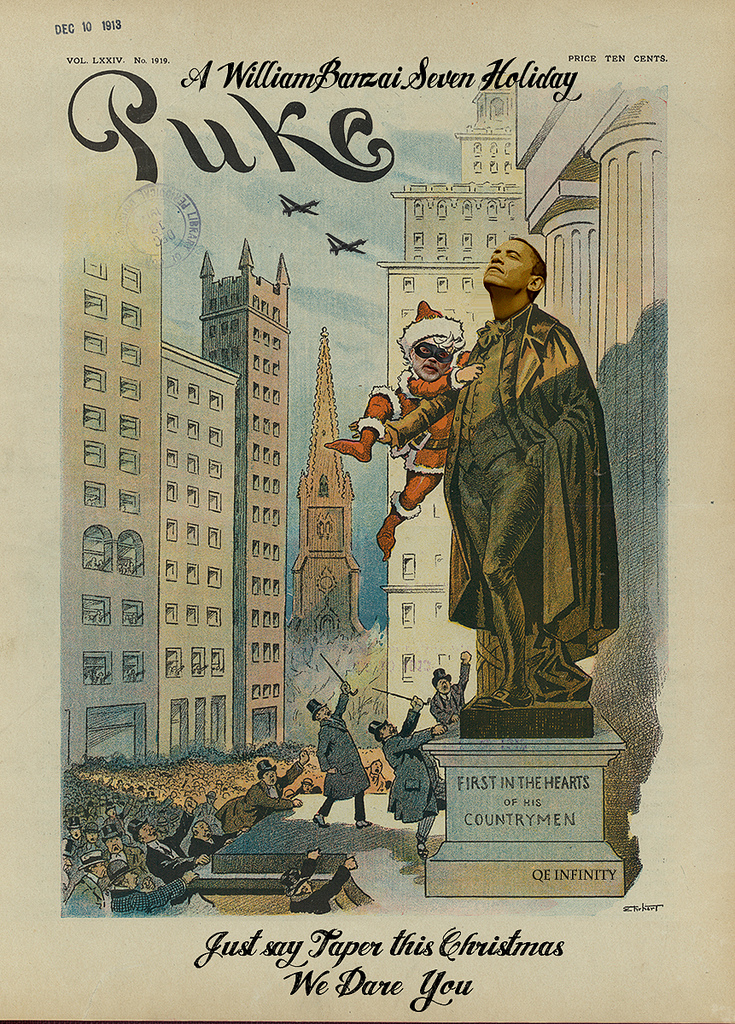