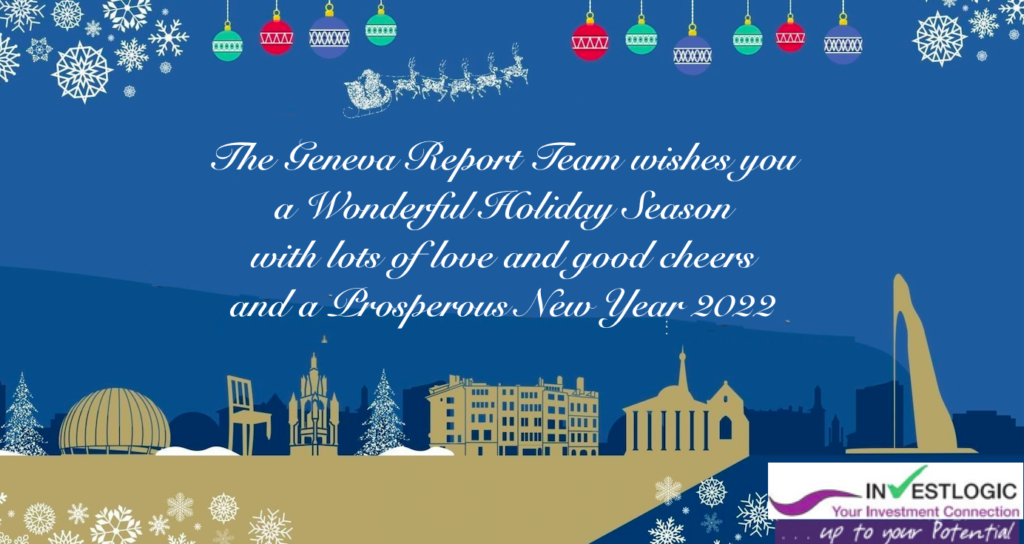 The week ended on a bearish note, although the Fed’s decision seemed to be well received on Wednesday. Financial markets are finally losing ground in the wake of technology stocks, which are more sensitive to the economic situation and the cost of money. Despite the approaching holiday season, volatility could persist due to the pandemic, after an exceptional year in 2021.

The Dow booked a 1.7% decline, the S&P 500 lost 1.9% and the Nasdaq Composite finished with a weekly drop of 3%. Over the past four weeks, small-cap and value stocks have both entered correction territory after the simultaneous expiration of single-stock options, single-stock futures, and stock-index options, and stock-futures added to the volatility. Concerns on higher interest rates and the impact of a surge in omicron covid variant cases weighed on investors. 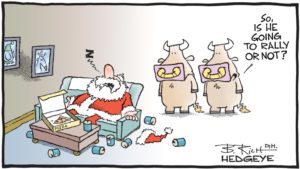 The S&P 500 is currently sandwiched between support and resistance -see below chart- (not to mention another touch of that 50-day moving average).

The damage below the surface was much more considerable. A rather large contingent of the S&P 500 index is well off their 52-week highs. NO guarantee that “Santa Will Visit Broad & Wall.”

As an observation, “buy the dip” still seems to be in play, but “sell the rally” is also working more recently… There is a clear wall of resistance for the market to climb, along with increasingly a wall of worry (Omicron, Fed, geopolitics, inflation). 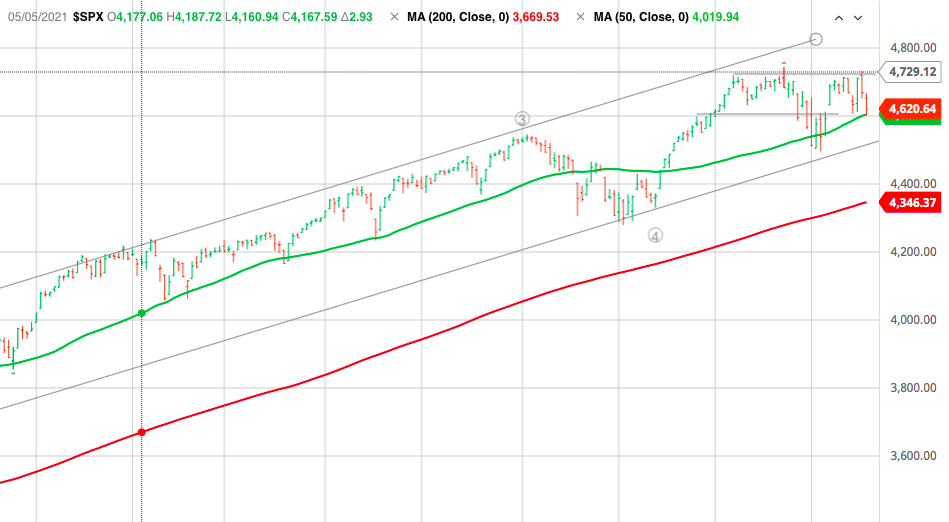 On the “monthly” chart of the S&P 500, one can easily see the sharp move higher off the coronavirus crash low at (A). The move has been so steep that the up-trend has little room for error here… and the pattern of the move has taken the shape of a bearish rising wedge pattern. More importantly, and of concern, is that the S&P 500 created a bearish reversal pattern last month at (1). And this occurred right at the 261.8 Fibonacci extension level. Not only does this create strong overhead resistance, but it also adds to concerns surrounding this rising wedge pattern.If support would break at (2), following this reversal pattern, a dangerous message would be sent to investors. In short, stock market bulls don’t want to see this take place!

What would bring bulls a Merry Christmas and a Happy New Year?
A breakout above the 261% level at (1).

It was a near perfect end to the week for gold, which is back above the USD 1,800 per ounce line. The gold metal is benefiting from the fall of the greenback but also from an increase in volatility in the equity markets, where there are brief sequences of euphoria and confusion.

While bullion has certainly demonstrated a greater showing as an inflation hedge in the latter half of the year, gold bears remain in the shadows, ready to pounce once the dollar’s rally, or the reemergence of a Treasury bill spike, become too much to ignore.
Gold’s hold above $1,800 looks tenuous, though it also could break new ground into $1,900 and above. Keep your seat-belts fastened in the coming week.

On the cryptocurrency market, the holiday season is looking less joyful than expected. Looking for signs of a top in the crypto market now, in December 2021, several months after a joke coin named after a meme dog achieved a market cap higher than most of the stocks in the S&P 500, feels like a wasted exercise. 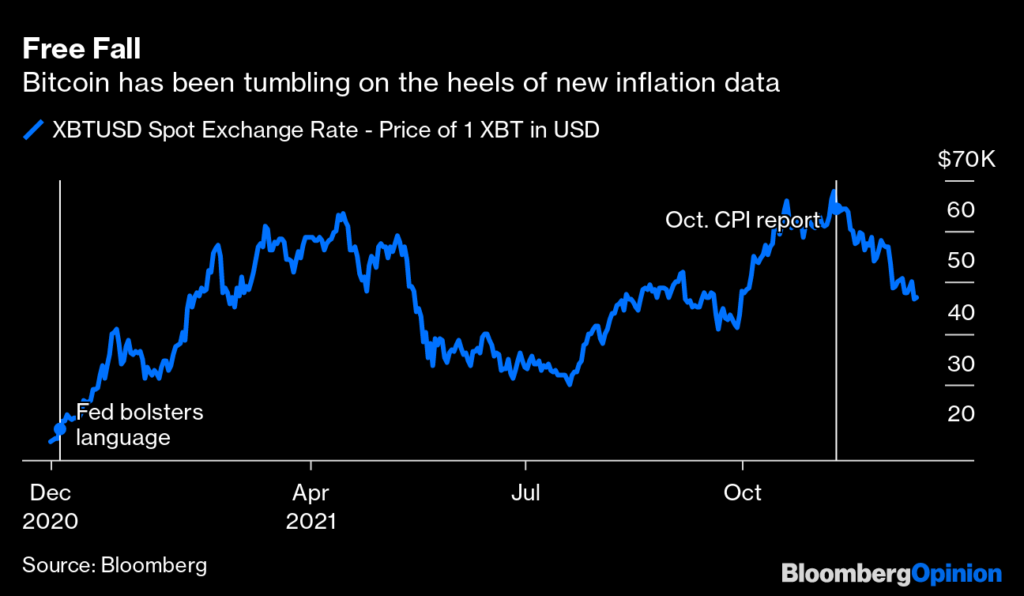 But given that crypto has been melting down hard lately — making a mockery, by the way, of the idea that it’s some kind of inflation hedge — it’s worth asking if this bubble has finally burst.

A fall of more than 30% from the highs has come to cast doubt among market players regarding the bullish continuation yet well established since the beginning of the year. Bitcoin is not catching its breath either, coming dangerously close to $45,000

Then again, nothing makes sense anymore, so who knows?

Among other news for the week 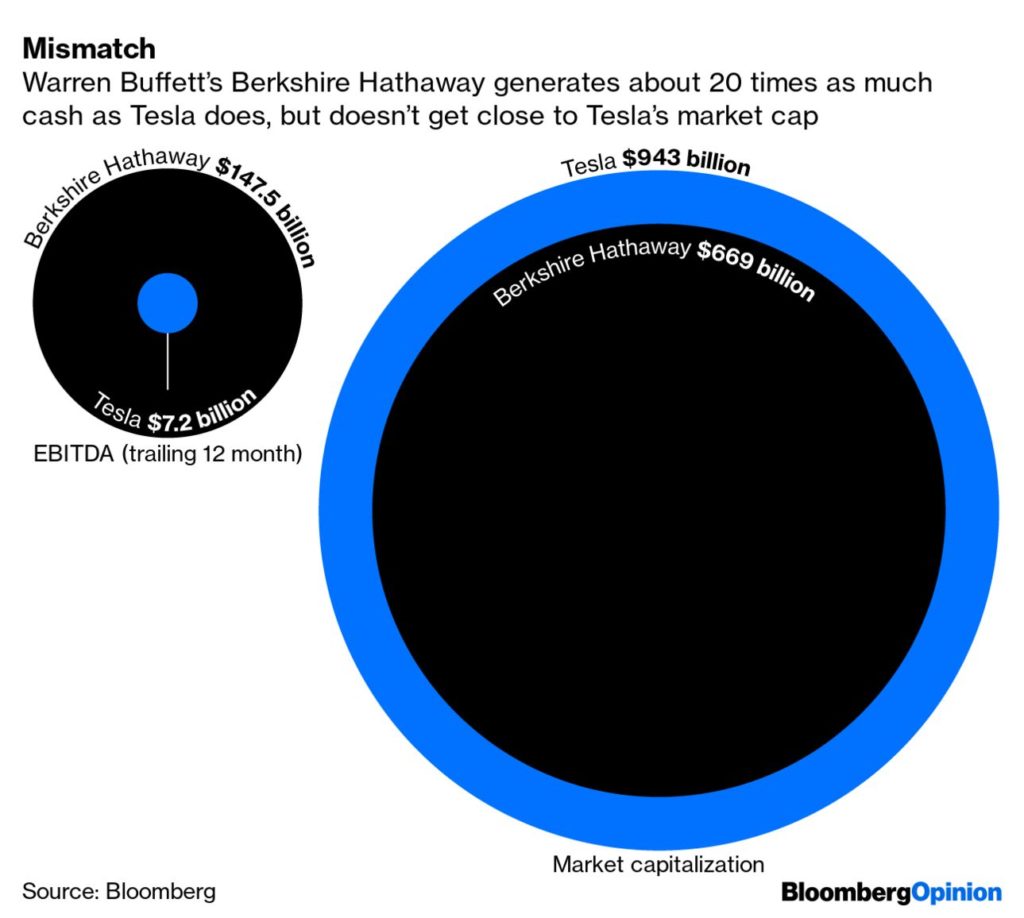 This Is What It Sounds Like When Hawks Cry

Of course the main event this past week was the principal western central banks monetary policy meeting in order to spend the holiday season in peace. But don’t think that the exercise was going to be easy, since they had to deal with a very complex equation made up of inflation, the floor rate, the coronavirus, overheated labour markets, global growth and so on. 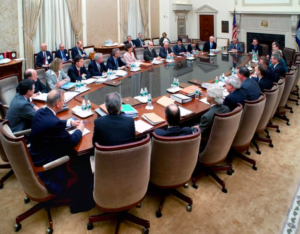 Jerome Powell explained that the US economy is strong enough to do without the asset purchase plan put in place to support the economy, which will end in March. At the same time, the Fed presented a precise schedule of rate hikes. There will be three in 2022, then three more in 2023 and finally two in 2024. The central bank is accelerating the pace to curb inflation. Last September, it was still thinking of only one rate hike next year. The initial reaction of markets was positive, but the next day, nervousness took over again, especially on the Nasdaq, where highly valued stocks are not happy about the prospect of less liquidity.

Considering the FOMC DOTS the upward shift and acceleration in rate hikes over the next three years is very evident. This was a meaningful escalation. But the longer-run projection for the “terminal rate” is unchanged. The Fed’s governors still believe that rates will never need to go higher than 2.5%, where fed funds peaked in 2019 during the abortive attempt to return rates to normal after the financial crisis.

There is still no belief at the Fed that inflationary conditions are “normalizing,” or that we are returning to the kind of pre-2008 world where central bank vigilance against rising prices will once more need to be a fact of life. Instead, there’s a hope that inflation can be brought under control with relative ease. The market appears to endorse this, and also to believe that there will be no need for the extra rate hikes in 2023 and 2024 predicted in the dot plot.

While benchmark interest rates are likely to remain unchanged at 0%-0.25%, the central bank could hint to an earlier start to interest rate hikes in 2022 (though that would come in the face of new worries over the Omicron variant and the potential hit to growth). Expectations are also high that the Fed will hint at a faster tapering of asset purchases, signaling an end to easy-money policies that have helped fuel this year’s stock market rally. That could weigh on higher valuations, such as technology and consumer-discretionary shares, however, there is a divide in the investor community if that is already priced in.

Even though the market is telling you is the Fed doesn’t have much scope to go beyond two or three hikes ! The US bank had prepared the markets to double Tapering and three rate hikes in 2022. They already had the information, and as the economy appears to be operating at full capacity, indices rebounded to support after the announcement. 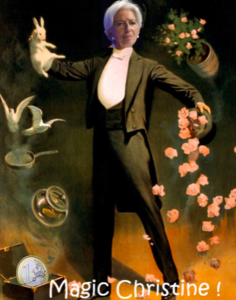 The ECB, for its part, was content to maintain the status quo, although it announced the gradual end of its asset purchase program designed to counter the pandemic. However, in order not to disrupt the markets too much, the pre-existing repurchase program will be reinforced.

Lagarde explained that the PEPP reinvestment machine will still be operating in the background and this will allow the ECB to buy sufficient Hellenic debt. Trust us, she said in essence. Other peripheral countries’ debt such as Italy and Portugal sold off too. But that is perhaps just market nerves that the security blanket is now smaller. It’s not necessarily less effective.

Lagarde’s smooth reassurances saw yield rises subside.  All in all, it was a successful first step to weaning the euro area off record QE. But be in no doubt the ECB has yet again erred on the dovish side and seems determined to plow its own furrow. It’ll leave the swifter stimulus reduction to others. There is plenty of work still to be done to reinvigorate the euro economy.

At the same time, the Bank of England surprised the market by raising its key rates, while the Omicron variant is overwhelming the UK.

The seasonality argues for a year-end rally. We will have to wait until 2022 to apprehend the possible economic slowdown and/ or the continuation of inflation on high regimes to cast doubt on expectations of EPS increases.