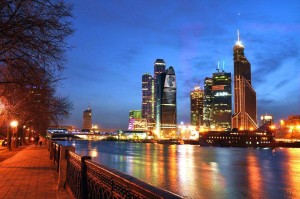 This gives us a view to the mixed picture of an economy in search of its identity among various models. Today, the Russian economy has to meet several challenges. The slowdown in growth puts into question the choice of a model mainly driven by exports, be they of commodities or of semi-finished products. We must dispense once and for all with the myth of Russia being some kind of an oil emirate. Fossil fuels make up only 10% of the GDP of Russia, and they count for some 50% of its budgetary resources.

The question arises as to how much Russia should re-concentrate onto its own economic space and onto the neighboring countries. Such are the stakes of the Eurasian Customs Union constituted with Kazakhstan and Belarus. This customs union stands, in fact, as a contradiction to the influence of the European Union. However, the latent conflict between Russia and the EU should not be exaggerated. The EU remains the foremost client for Russian exports.

But this is not by far the only challenge. To these must be added a new international role, the best instance of which has been provided by the recent action in Syria (September 2013), and the developing strategic partnership with China. However, in order to benefit effectively of its newly acquired influence, Russia must find back to the path of a long-lasting, sustained growth. It is clear therefore that presently both challenges, internal as well as external, combine. Russia faces indeed a time of choices.

The G-20 Summit which took place in Petersburg in 2013 offered an occasion to define some of the new challenges as well as the new opportunities. Granted that a large part of the discussions were monopolized by the situation in Syria. But extremely important economic decisions have also been announced, in the context of a deteriorating Russian economy. While growth continued to slow down, important contracts have been signed with China. Moreover, it was at the occasion of this international reunion that the announcement was made of a common decision taken with Peking to constitute a fund amounting to some 100 billion dollars for the purpose of creating the embryo of a new reserve currency. It is true that the pursuit of its policy of budgetary expansion by the Federal Reserve of the United States, added to the political difficulties concerning the budget of the United States encountered by President Obama, render ever more urgent the emergence of a reserve currency which would be a truly collective instrument. Nevertheless, in order to be able to carry out such a project, Russia needs a strongly expanding economy; which is far from being the case at present.