Reco for the next ten years…

This is the start of a decade-long shift for Russia… and with thirsty emerging markets to its south, it could be a very profitable 10 years. And over the next 10 years, we are going to see even more changes

At Investlogic we are adapting to meet those changes. That’s because our goal is to build long-term, stable wealth. Everyone wants the same thing: secure, sustainable wealth. We want consistent gains over a long period of time, without a lot of risk. I’ll be honest with you..We’re not going to get there by trading !

In 2023, emerging market middleweight cities will contribute more to global growth than the developed world and global mega-cities. Over the next 10 years, more than 230 million households will earn more than $20,000 in the developing world. That’s up from only 80 million in 2007. In other words, an extra $3.1 trillion worth of consumption will hit the markets in developing economies.

But through a combination of consumption and investment, emerging markets could contribute nearly 50% of the world’s GDP. And many of these markets are already pulling wealth from Western developed countries and shifting it East.

According to the McKinsey Global Institute (see research here), the world’s economic center of gravity — calculated by weighting national GDP by each nation’s geographic center of gravity — will be somewhere in southern Russia. That makes Russia the key geographic hotspot connected to massive emerging market growth in the Far East. See Russia – SouthEastern Shift  (in complement of our previous reports Russia россия-зовет-russia-calling) 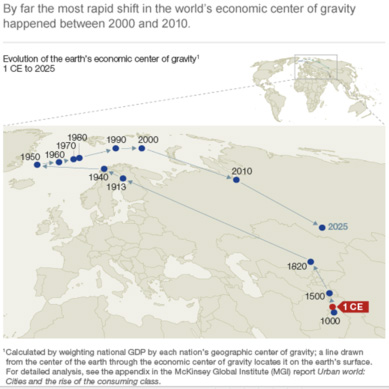 And Russia will be no slouch when it comes to growth. Russia is at the beginning of a second energy boom, and this time around, the country will invest in necessary infrastructure to bring this industry into the 21st century.

But it is not only related to natural resources, it affects also high tech industries, as evidences of this evolution look at our previous posts on our blog in complement : our reports  Top Russian Start-Ups and top 10 Russian internet companies  in Doing Business in Russia

See other  reports and comments focusing on Russia

Into New Technologies : From The New York Times:

Oil service companies are importing technologies like fracturing for what some energy analysts say will become a shale oil boom in Russia to rival what has happened in North America. …Several oil companies operating in Russia, including Ruspetro, have begun profitably extracting oil from shale rock and other difficult geological formations in Siberia, holding out hope that the type of advanced drilling techniques used in recent years in North America can be widely adopted there, too.

In another sign of the buzz around shale oil in Russia, Exxon Mobil is in a joint venture agreement with Rosneft, the state oil company, to drill test wells into a Siberian shale oil field. Statoil and Shell, also through joint ventures, are drilling or plan test wells in Russian shale beds. Lukoil has a pilot shale project.

Another example is Startup Sauna, a Northern European accelerator program that is starting to extend its reach deep into Russian territory as a way of unearthing talent. And even though Novosibirsk isn’t officially in Europe at all, Startup Sauna sees cities like it as a crucial breeding ground for future generations of world-changing startups.

That’s why the organization recently toured around the country, including not just the top-tier cities but also places like Novosibirsk, and the more central cities of Yekaterinburg and Kazan. Searching for great companies was interesting, although not exactly easy.

Startup Sauna’s blog has detailed a few of the companies that were invited to join the program, including Osklad (warehouse inventory software for business) and AppScale, which allows apps to tap into social network APIs more easily.

But a lot of the action came from companies from traditions outside software and the web. That included high-tech healthcare companies such as Maxygen, a vaunted Moscow startup focused on low-cost, rapid DNA testing; and Celoform, a sort of next generation bandage hailing from Yekaterinburg. Then there was St. Petersburg’s RosTechnoExport, which makes small autonomous helicopters that can be used by the oil industry.

“The more you move away from Moscow and St. Petersburg, the more technical it gets,” says “wingman” Ylimutka. “The high-tech stuff is what really makes Russia interesting. Part of it is probably because there is more of a military influence in these parts of Russia.”

Still, it wasn’t a parade of business ideas that span out of military technologies. Most of the companies we met were clones or versions of other services. It’s really difficult getting out of the Russian-centric mindset, and it’s still mostly me-too products. The West has Facebook; Russia has Vkontakte, for example..