MARKETSCOPE : This Trend Is Not Your Friend

A year ago financial market pricing expected 2.4% inflation over the following 12 months. We got 9.1% inflation. So maybe financial markets are not omniscient. The last time inflation ran this hot, Harrison Ford was only 39 years old starring in the #1 movie in America at the time, Raiders of the Lost Ark. Ronald Reagan was in his first year in office, Jeff Bezos was still in high school.

Stocks remained volatile in light summer trading, but markets had a solid finish to the week, thanks to options expiration. Options expiration managed to keep the markets afloat and did not allow the S&P 500 to drift too far from the significant open interest levels around the 3,800 and 3,850 levels. But Friday’s rally still was not enough to overcome three days of selling earlier in the week,

This week we will see a significant acceleration of corporate results reports, with some stars of the technology sector,  but the volatility could persist as the quarterly earnings season has just kicked off.

The unwelcome landmarks continue to fall. Last week, US CPI rose by 9.1% yoy in June, the highest increase since 1981. The latest US inflation data is expected to prompt the Fed to raise rates.The market is now betting on a 75 and 100 bps rate hike at the end of July. The odds of a 75 bps rate hike now stand around 70%, while a 100 bps rate hike stands around 30%, a strong move that could push the US economy into recession.

In Europe, stocks gained after three consecutive months of losses. However, the advance was restrained by worries that an energy shortage might cause a recession in Europe. Chinese stocks eased as rising coronavirus cases and elevated geopolitical tensions hurt sentiment. The value of a euro dropped below the value of a dollar for the first time in two decades.

The European Central Bank meets on Thursday, in a meeting that is expected to see the bank raise rates for the first time in a decade. There’s no shortage of news surrounding the ECB’s decision, whether it be the drama in Italy around Prime Minister Mario Draghi’s attempted resignation or the Euro’s flirtation with parity.

The market did hold minor support setting a higher low from the recent bottom. The rally was also strong enough to keep our short term  MACD buy signal intact but with RSI weaker it is not convincing 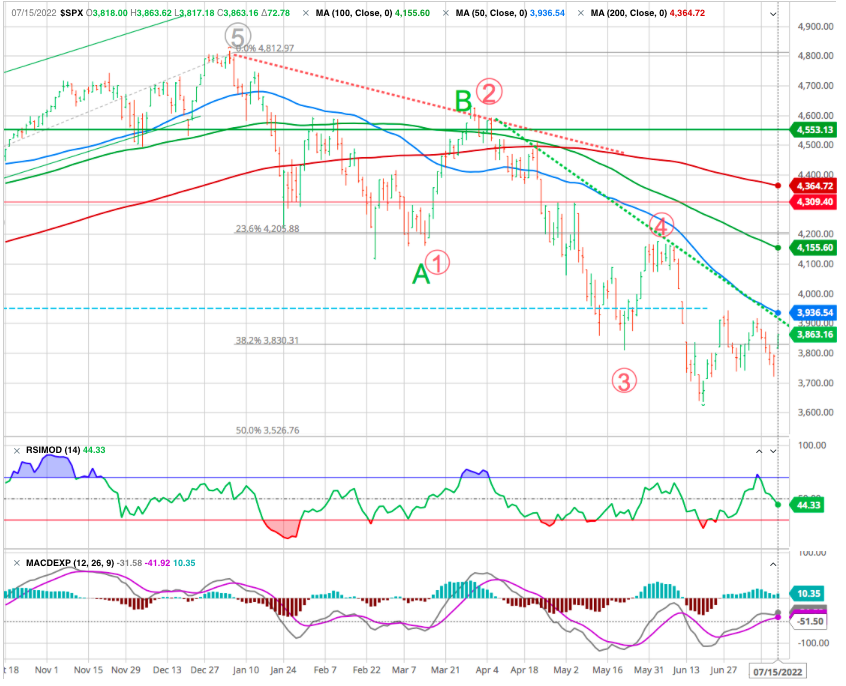 The market is now challenging the downtrend line from the March highs, and with the recent sell-off, this is the best chance we have had as of late to potentially push above that resistance. Unfortunately, the market will almost immediately contend with the 50-dma resistance level.

Markets now openly questioning how far and how long the Fed can tighten policy before having to reverse course, see chart us yield  in the last 30+ years. Every time the yield curve inverted, the Fed was forced to end its tightening cycle.   Here we are again today.

Gold is approaching the USD 1,700 per ounce line, its lowest level since August of last year.

During the first part of 2022, the precious metal benefited from the rising volatility across markets, and a series of positive breakouts triggered a rise towards the previous high (above 2k). Since then, the positive momentum has faded and a consolidation phase has materialized. 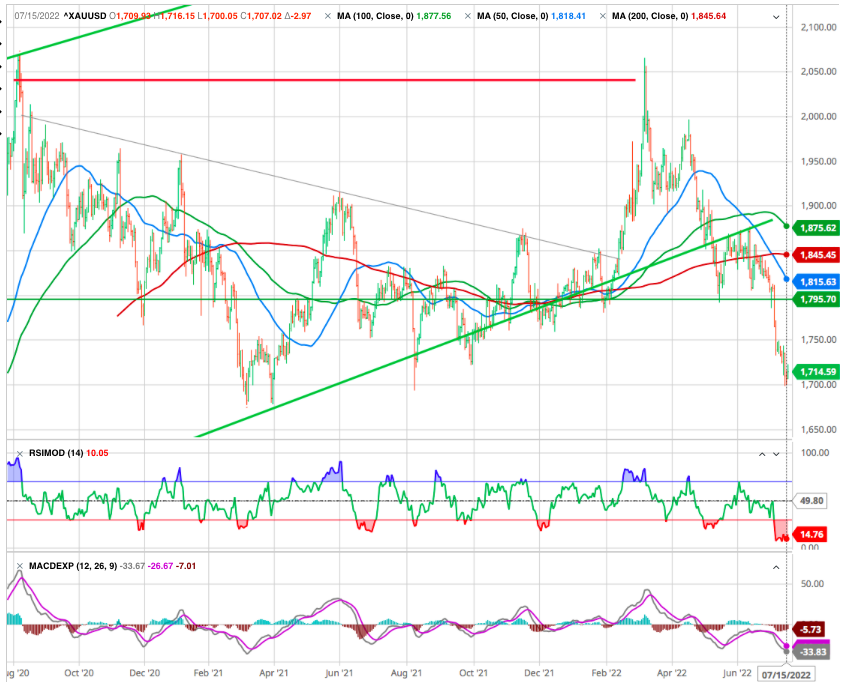 Following a period of stabilization at around the 200-day SMA, the negative momentum has resumed and pushed the price below the rising support line connecting lows since April 2021.

While this negative price action may trigger a decline towards its prior low at around 1700, in the short-term the RSI is oversold and a relief rally towards the breakout level may occur.

Oil prices plunged this week, weighed down by growing recession fears that weigh on the outlook for demand which means less demand for oil.

The downside risk is elevated. Short-term, the index has made a negative breakout. The trends in EURUSD have deteriorated significantly and the negative momentum has recently accelerated. 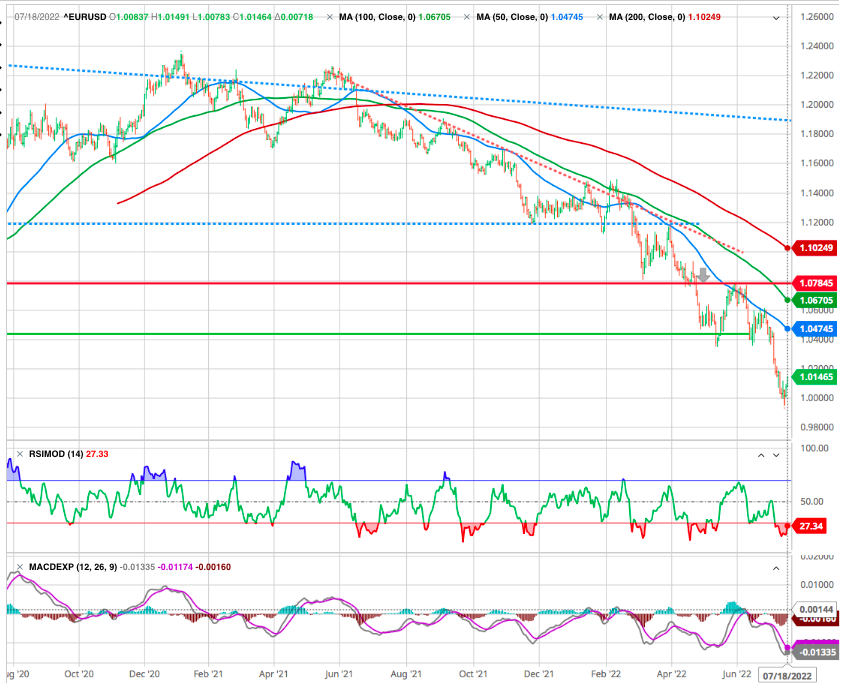 EURUSD has been trading in a bearish channel since February and the recent break below the previous low paved the way for a further decline towards parity.

The euro is trading at its lowest point versus the dollar in nearly 20 years and at parity with the dollar. The ECB is now entertaining the thought of raising rates, but is fearful about what that would mean for peripheral yields in member states like Italy.

Couple that with China’s weak economic data and Japan’s reluctance to come off its negative interest rate policy and yield curve control, the dollar has strengthened versus the Japanese yen and the Chinese renminbi too. 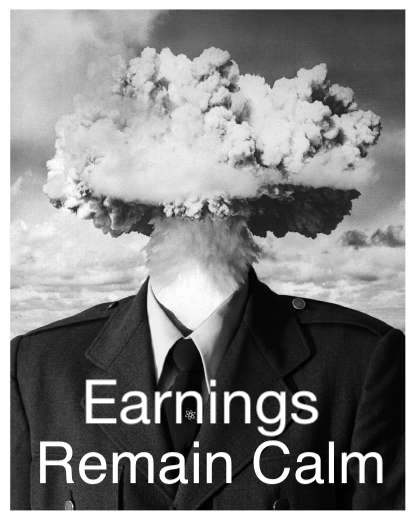 As we’re seeing, that’s not always the case. 40-year high inflation of 9.1%, fears of recession, and credit and loan defaults are paving the way for earnings miss. Unfortunately, the latest Q2 earnings from some of the largest financials are dismal such as JP Morgan.

For perspective, analysts’ estimates are currently at the most significant deviation above that 6% earnings growth trend (source RIA) 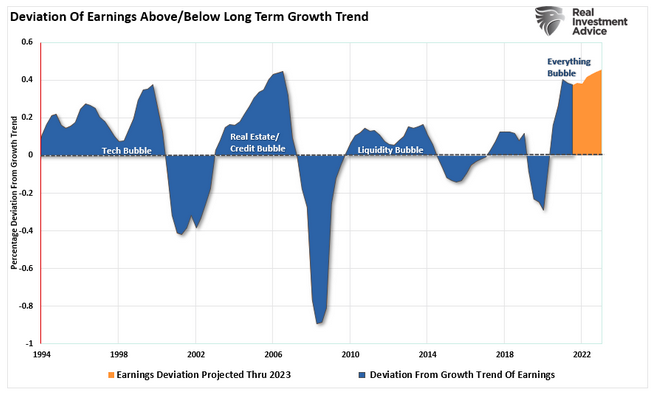 The downward revision has been quite marked, and since May 1st, forward estimates have fallen 5% from their peak.

Stocks Vs. The Economy, Which Is Right?

The market disconnect from underlying economic activity is due to psychology. Such is particularly the case over the last decade, as successive rounds of monetary interventions led investors to believe “this time is different.” 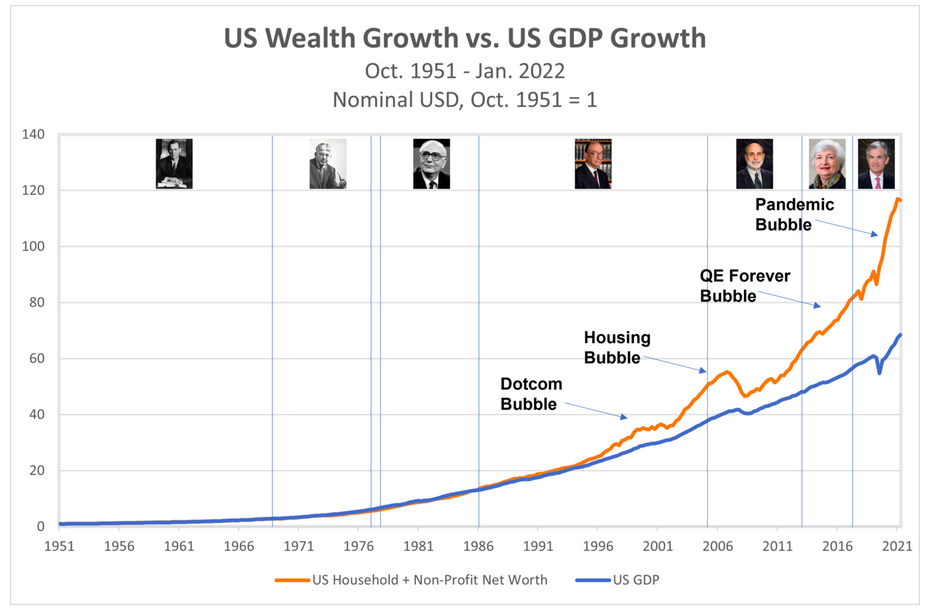 Unfortunately, it never is.

As we have noted previously, investors likely won’t want to own stocks by the time the “bear market” is over. That is certainly not the case currently.

Despite the bloodshed, many investors continue overthinking it, buying the “dips” the whole way down. That hasn’t worked out so well. Many investors are trying to “fish” a bottom in the market. The “F.O.M.O.” of missing the bottom is also another sign the bottom is not likely in.

if you’re a long-term or risk-averse investor you don’t necessarily need to do anything. Bear market rallies can be intense, but they tend to end just as quickly and violently as they begin.

The worst thing you can do is give in to “FOMO” (fear of missing out) and take on more risk than you’re comfortable with, only to watch the market fizzle out and fall to new lows.

Instead, most folks would be better off waiting to make significant new investments until the odds of a long-term bottom are in our favor. This could occur one of two ways.

And right now, neither of these requirements is in place.

The risk is no longer inflation, it is about recession. Earnings need to come down as well as valuation multiples. The sweet spot now is high dividend yielding stocks with strong balance sheets. 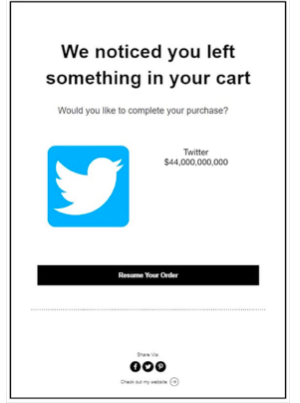