Apocalypse (Not ) Now : The Bulls Strike Back ! 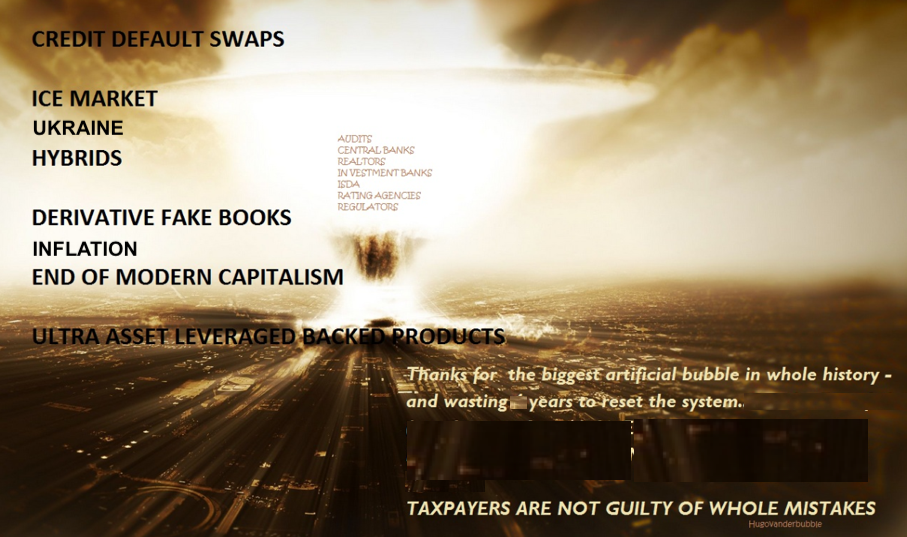 This past week was marked by a rebound in equity markets and a return to calm in the minds of investors after the volatility of recent weeks.

The major US equity indices ended the week higher, with the S&P 500 Index reaching its highest level since February 10 on Friday. Tech stocks outperformed, helped by Apple. A continued rise in many commodity prices boosted the energy and materials sectors. Developments in Russia’s war against Ukraine remained on investors’ radar.

Core eurozone bond yields rose, following U.S. Treasuries higher after hawkish Jerome Powell’s comments stating he is serious. To counter inflation, he announced a faster than expected rate hike, in half points instead of quarter points, for a total increase of up to 2.5 points by the end of the year. These rate hikes seem rather accommodating in the face of rising inflation.

All this communication was probably carefully orchestrated: flexibility first, firmness second. On the investor side, the ploy worked rather well, since it pushed stocks higher. There is no alternative to stocks (the famous “TINA” concept), it seems the market is saying.

As a result, the apocalypse is being postponed. Even the IMF is saying that the global economy should escape recession this year. The clouds seem to be clearing a bit, but good weather should never be taken for granted.

The Bloomberg World Index fell 2.6% in Feb, and Russian stocks lost over half their value. European stocks suffered the most outside of Russia, with Germany down 7.1%, followed by Italy (5.1%), France (4.7%) and the Netherlands (4.4%).

Markets with heavy commodity-producer exposure that underperformed the World Index in 2021, such as Brazil, Australia and South Africa, performed best. Only Mexico, South Africa, Brazil and the U.K. have posted positive year-to-date performance.

Half Full or Half Empty Glass :  Cautiously Optimistic

While US markets did advance last week above the downtrend line, the market is pushing more extreme overbought conditions. While this does not mean a “sell-off” is imminent, it does suggest either some consolidation or a pullback to support is likely. There is some resistance approaching overhead the market will likely struggle with the week.

We previously stated that any rally above the downtrend would test the 50- and 200-dma averages. That test occurred on Friday, with the index clearing the 50- and sitting just below the 200-dma. With markets moving to short-term overbought, it may be challenging for markets to clear resistance this week. 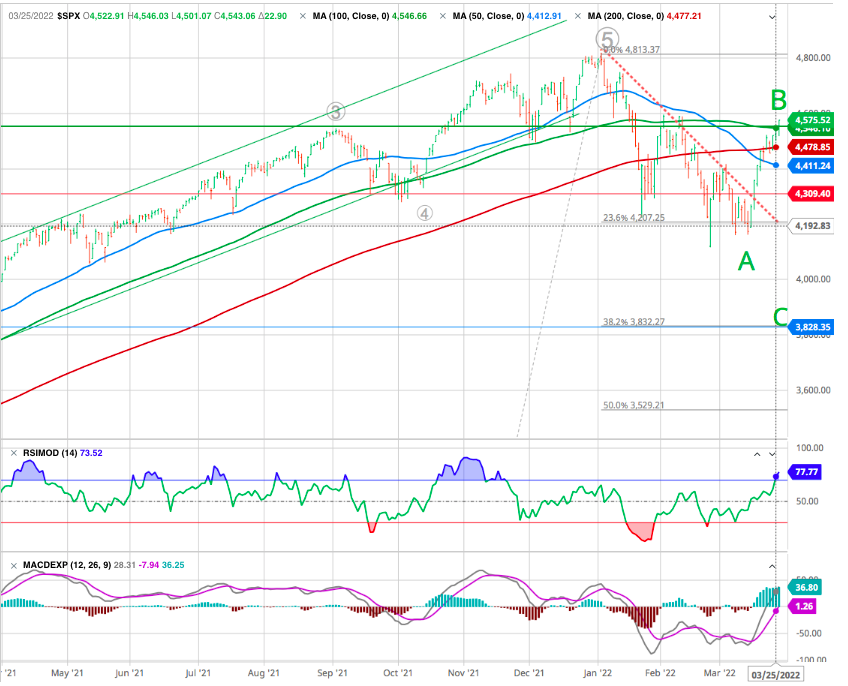 In the short term we might see markets moving sideways between the two support and resistance lines. On the bullish side, investor sentiment and positioning remain negative. While the rally did reverse some negativity, it still provides “fuel” for a rally through the end of the month. That negative sentiment is very constructive for a relatively strong counter-trend rally that will likely surprise the bears. But it could also be a set-up to trap the bulls later this year as we potentially face a “policy mistake.”

Key point is that despite extreme pessimism in the sentiment surveys, investors/speculators have not yet capitulated and made their move on actual positioning.

Overall we remain  cautious and still expect the monetary policy shift to weigh on the economy and markets, not mentioning the unpredictable issues in the Ukranian war. At the best indexes should retest the downtrend line.

For the NASDAQ the short term potential seems a bit larger as the technology stocks have  room to catch up to retest the MA upward. 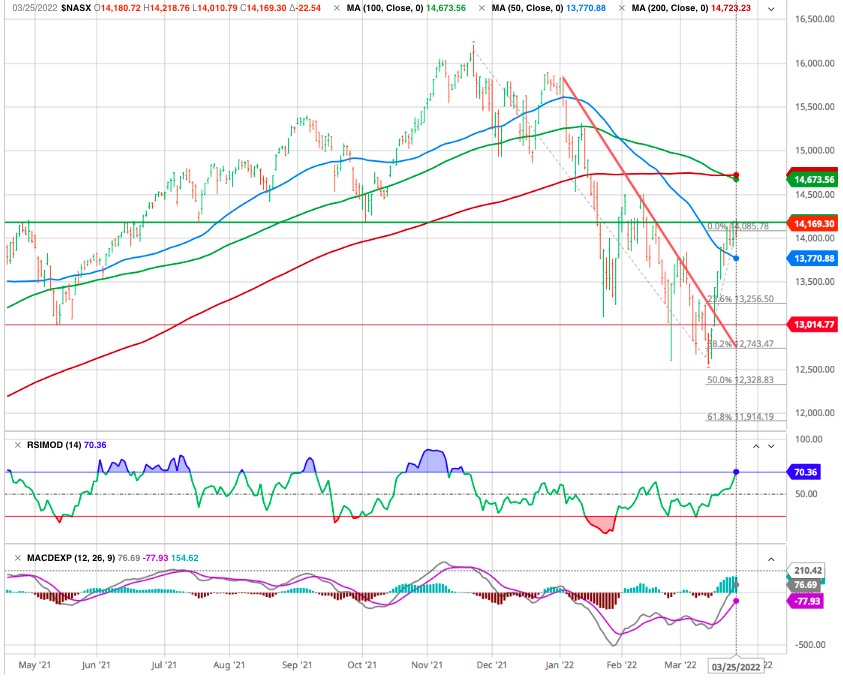 The Swiss Market Index clearly broke its downtrend and is also challenging the short term resistance and testing the MA. With the large “run away” gap at 11800 we remain cautious as we expect this gap to be filled down. 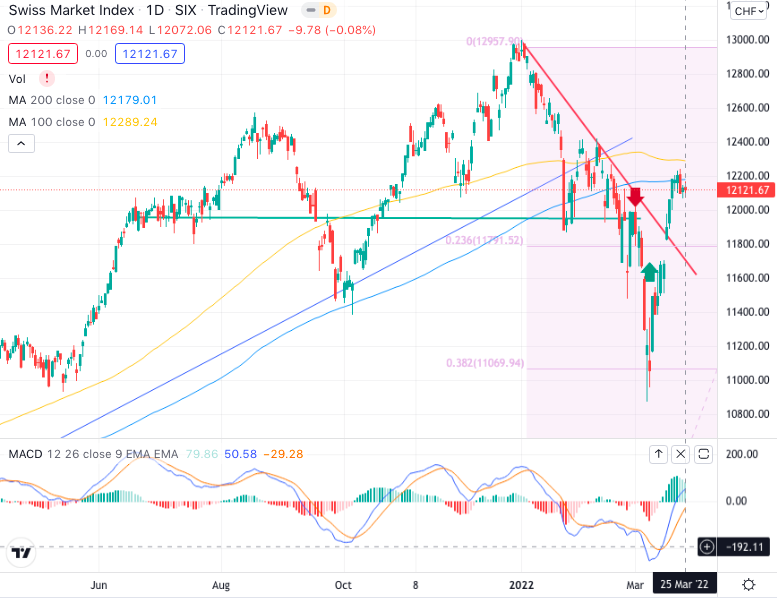 A STRONG CASE FOR GOLD ? 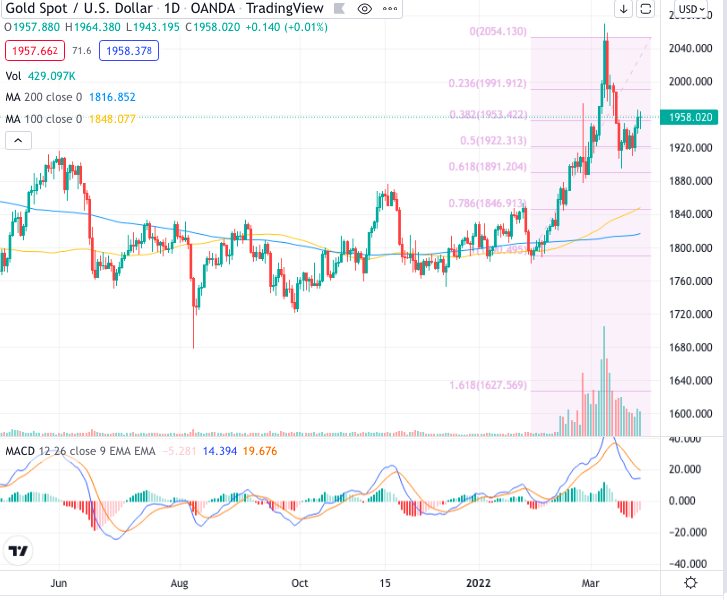 Gold presents an accumulation level between 1890 (61.8%)correction of the last up wave).

Metal prices have also resumed their upward trajectory. The resurgence of the Covid-19 pandemic continues to disrupt supply in China, a constraint that exacerbates tensions on supply chains, which are already strained by the Russia-Ukraine war. This supply shock, which is characterized by less short-term availability, is pressing prices higher.

Oil prices have resumed their upward trend, due to supply problems in the Black Sea.

On the crypto-currency side, we’re seeing renewed energy this week, with bitcoin recovering almost 10% and returning to a position around $45,000. Correlated for many weeks to the US technology index, but with much higher volatility, bitcoin is proving, even more so during this hot geopolitical environment, that it is not a safe haven. 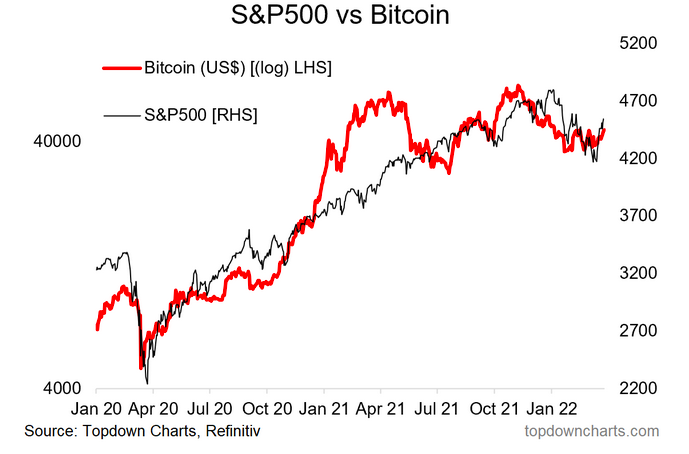 If we think of Bitcoin as basically a barometer for the ebb and flow of risk appetite and liquidity, the apparent base in bitcoin (still needs to break out to the upside though) looks to be a positive sign for broader risk assets such as the S&P 500.

“If we determine that we need to tighten beyond common measures of neutral (i.e. an interest rate that neither hinders nor fuels economic growth) and into a more restrictive stance, we will do that,” Jerome Powell announced during a speech at the National Association for Business Economics. He even went as far to say that the central bank is prepared to raise interest rates by 50 basis points at the next policy meeting.

However, he is somewhat optimistic that central bankers will be able to engineer a so-called soft landing, in which the rate is raised high enough to keep the economy from overheating but not so much that it triggers a recession. “While some have argued that history stacks the odds against achieving” this, there are three episodes – in 1965, 1984, and 1994 – where the Fed “significantly” raised rates without a downturn. “I hasten to add that no one expects that bringing about a soft landing will be straightforward in the current context – very little is straightforward in the current context.”

During previous periods where the inflation spread was positive, and the Fed was hiking rates, such hikes preceded either a recession, bear market, or a crisis. 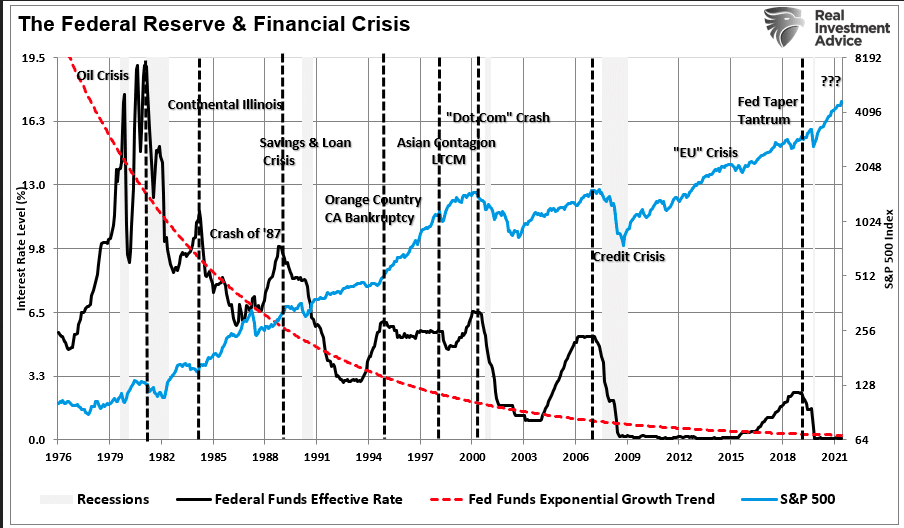 Investors buy stocks on expectations of continued economic and earnings growth. As the Fed hikes rates to slow economic growth, such will lead to a reversal in earnings.

Investors are taking Powell’s transparency as a step further to say ‘he’s just preparing us for the worst,’ whereas, the bond market is saying, ‘no, no, he’s telling you he’s going to do at least seven [rate hikes], and you aren’t listening !

Notably, an earnings recession will be coincident with an economic recession

So you’ve decided to move on with your life and just “live with stagflation”. Here’s what history says about where to allocate… 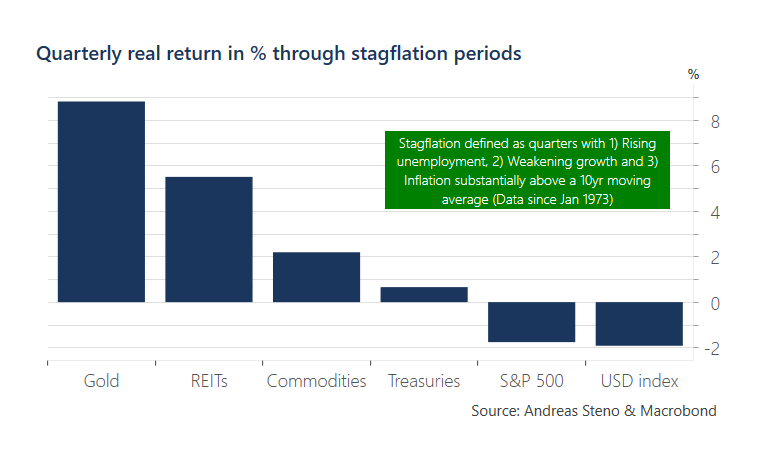 (n.b. past performance does not necessarily = future, etc).

The second great age of globalization is coming to a catastrophic close. SEE Bloomberg Opinion

The economic globalization seen since the end of the Cold War is coming to a close, which relied heavily on the interconnectedness of national economies for cross-border movement of goods, services, technology, and capital.

Protectionism and self-reliance have stepped in over the last few years, replacing free trade agreements and the promotion of economic liberalization. With less economic interconnectedness, the world will see lower trend growth and less innovation. What started off as trade wars and increasing tariffs has morphed into an outright rejection of the complex multinational supply chain, with pandemic restrictions exacerbating supply shortages and now the war in Ukraine endangering food and energy security.