MARKETSCOPE : No pain no gain

After long weeks full of gloom, investors have finally regained their appetite for risk. The proof is in the pudding, as the market indexes have broken out of their downward spiral by posting a weekly gain, the first after the market’s April-and-May selloff that had taken the Nasdaq Composite solidly into bear territory and the S&P 500 20% below its record high.

Much of the week’s gains came Thursday and Friday, as stocks rallied with strong retail earnings and a slowing inflation report sparking hopes, with consumer discretionary and energy stocks performing especially well.  The Federal Reserve is no stranger to this buying spree, particularly with the release of the Fed’s latest “minutes”, which suggest that the institution could show more restraint in tightening its policy to avoid a severe recession.

A more lasting recession could take the market down another notch. But let’s not be too pessimistic. The main pockets of overvaluation have deflated and the market has returned to its historical average valuation.

In Europe, shares rose as confidence grew that inflation may be peaking. But, Eurozone inflation data due out on Tuesday is expected to reach a fresh record high, which would cement expectations for the European Central Bank to kick off its own rate hiking cycle. The ECB’s more aggressive stance on policy rates is also helping to push the euro back above $1.07.

Chinese markets weakened amid concerns over slowing growth exacerbated by the government’s zero-tolerance approach to the coronavirus. The dollar weakened while cryptos tumbled.

The question now is whether the market has found a bottom ? 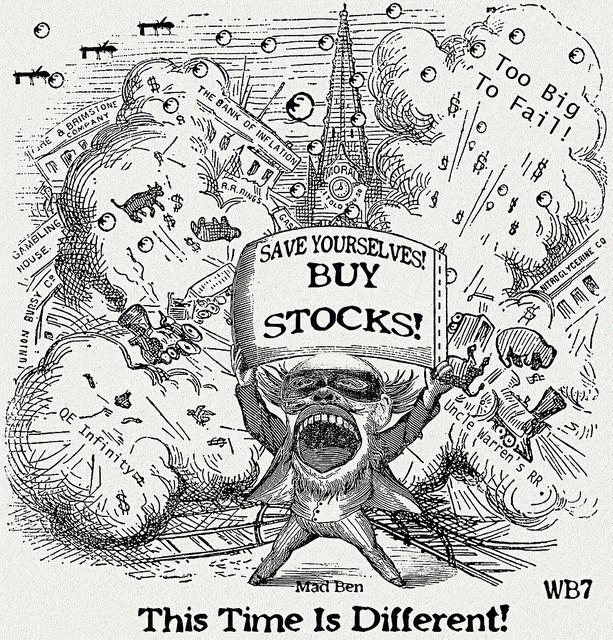 Goldman Sachs study reviewing the 12 recessions since World War 2: the S&P, Earnings and Valuation have fallen by an average 25%. 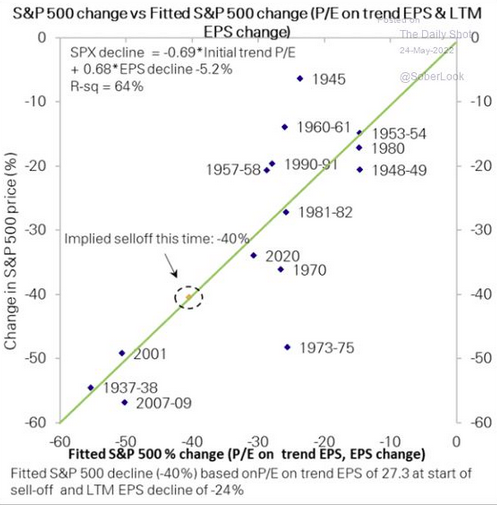 According to this graph, this time, with the P/E before the sell-off started and trailing twelve month EPS, it looks a little different. Accordingly, if a recession were to occur, we would only be at least halfway through the correction currently.

Bear markets are notorious for sharp rebounds that fool many investors into believing the “coast is clear.” And given how extreme many sentiment measures have become recently, we suspect we could see one of these now.

We think that after the July meeting the Fed is likely to become more ‘data dependent’ with regard to rate hikes, which essentially means that the policy path after July will depend upon the trajectory of inflation and progress toward correcting the supply/demand imbalances in the labor market.

And that means our top priority remains protecting our capital. This generally includes taking a more defensive posture with your investment portfolio. But it can also mean adopting a more flexible or “tactical” approach to the markets. Bear markets are highly volatile, and we may need to adjust our positioning as it evolves. 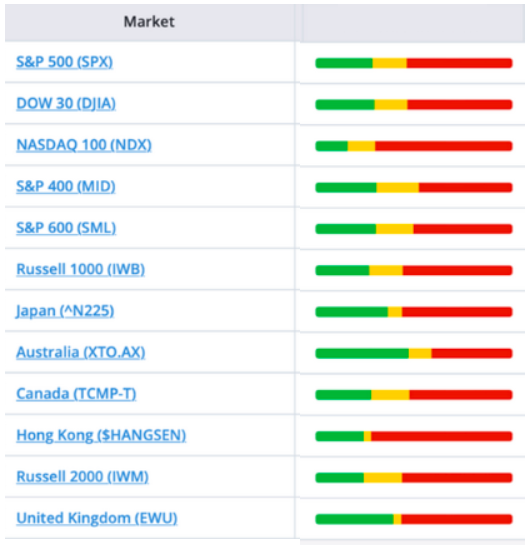 The S&P Sectors tool is pointing us today at some of our strategy decisions : 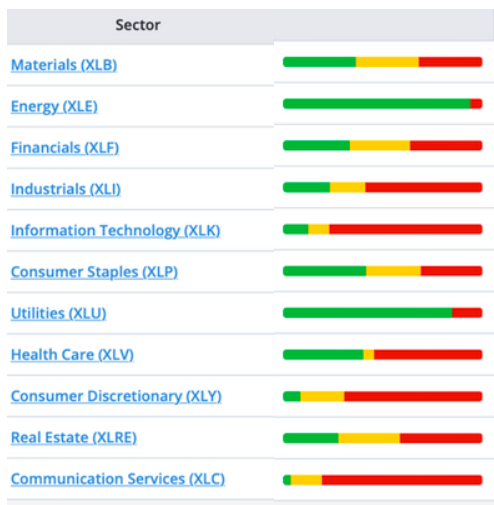 Defensive sectors and “quality” factors would usually outperform the market during the 12 months before a recession, according to GS. In five recessions since 1981, the average experience showed that energy, consumer staples, healthcare and utilities sectors would generally outstrip the index.

ENERGY
We’ve been bullish on energy for nearly a year now. The reality is that years of underinvestment in this sector is likely to drive a long-term bull market. Energy stocks are among the strongest and healthiest in the market right now. And despite this sector’s big rally over the past several months, many companies in the sector remain remarkably cheap.

HEALTH CARE
Health care is another traditionally defensive sector. But it also tends to have more pricing power than Utilities, suggesting it should do better in an inflationary environment. That hasn’t been the case so far. But the sector has still held up better than most others and remains healthy today.

Still, the Materials sector has held up better than others in the market today. And again, our tools can further reduce the risk of new investment by identifying the healthiest, highest-quality stocks right now.

The market relief rally should lead us to the 50% correction of the last down wave.

If you are comfortable taking more risk, there may be some tremendous short-term opportunities in weaker sectors as well.

Right now, several indicators – including investor sentiment and market breadth – suggest one of these rallies could be underway. And historically, the biggest rebounds tend to occur in the unhealthiest sectors and the stocks that have fallen the most.

The weakest sectors over the past year have been Communication Services, Consumer Discretionary, and Information Technology. So again, if you’re comfortable taking more risk, you could also consider allocating a small percentage of your portfolio to trades or “tactical” investments in those areas.

In precious metals, gold recorded a buying impulse, taking its price up to USD 1,870, a rebound that was however hampered at the end of the week by the sudden return of risk appetite with the advance of the stock market indices.

The week is not ending positively for bitcoin, which is hovering around $29,000 at the time of writing. After signing an eighth consecutive week of declines, the digital currency could well close a ninth if it fails to regain the $30,300 mark soon.

Unprecedented successive weekly declines that may not be over yet in this macroeconomic context where it is difficult to detect real bullish catalysts for risky assets. Cryptos decoupled from big-tech stocks this week with correlation crashing. 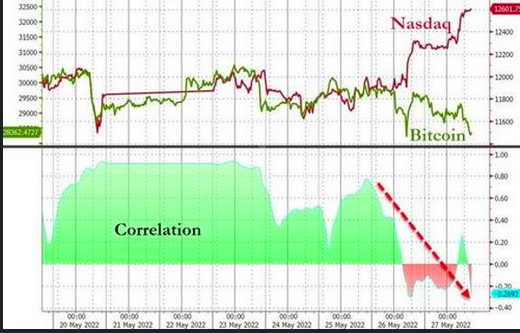 OOPS. Aside from a roughly two-month period last fall, Bitcoin has been nothing but portfolio poison for the past year. Maybe it will make more sense in some hazy future when Bitcoin stops behaving like tulip bulbs, but there is no sign of that happening anytime soon.

A Scary Chart: Unsold Inventory of New Houses Spikes, to Highest since 2008 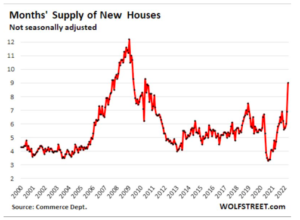 We would not be so confident about the households continued consumption. 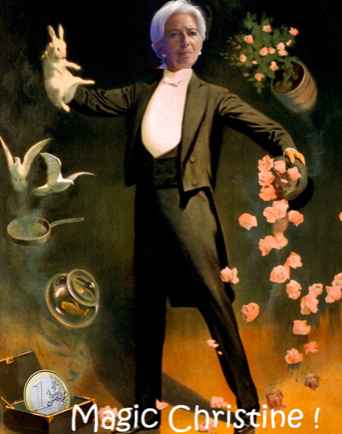 The euro rises and the dollar retreats further as Christine Lagarde all but nails on 50 basis points of rate hikes from the ECB by September.

The US dollar might just have peaked, and if it has then a blog post by Christine Lagarde has a lot to do with it. The president of the European Central Bank chose last Monday morning to post an essay to the ECB website, effectively setting out a new and more hawkish policy. Both the policy itself and the fact that she had felt the matter so urgent that she needed to launch it online between meetings helped strengthen the euro significantly against the dollar.

Effectively, she outlined a rationale for the ECB to turn away from a decade of aggressively dovish monetary policy and committed the bank to two interest rate hikes by September, which would bring its overnight interest rate back up to zero. That is still a lenient monetary policy by any definition, but after years of negative rates it’s a big deal.

The leap almost to $1.07 is clear from a currency chart. 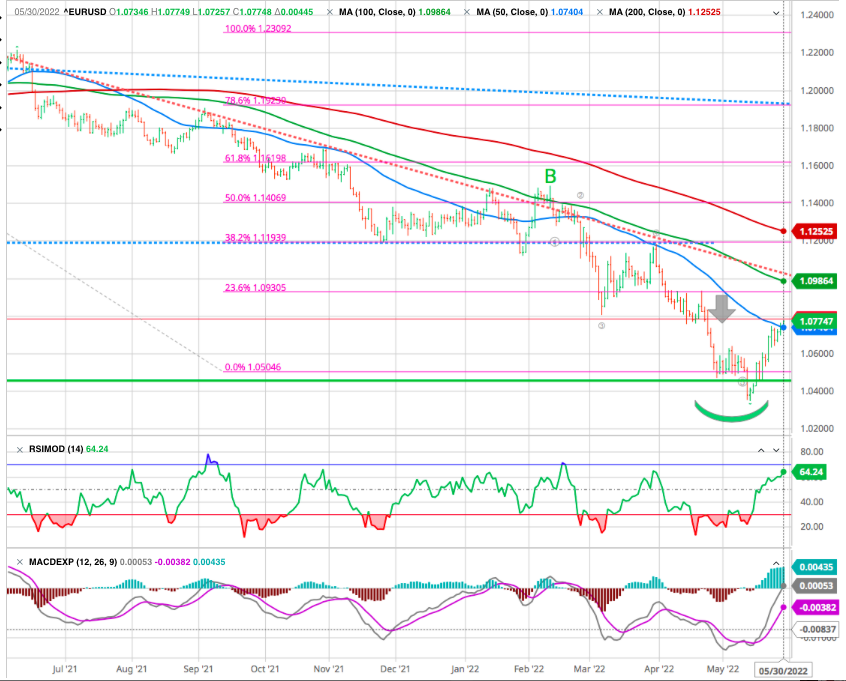 Forecasts for market direction through the end of 2022 span the gamut, but all agree that the Fed will have to fight off stagflation fears before things can turn around. What’s clear  is that there is no market put, and investors are waking up to that fact now… stocks are going to be meaningfully lower this year before we find a bottom.

“These are pretty binary markets at the moment,” explained Deutsche Bank’s Jim Reid. “If the US doesn’t fall into recession over the next 3-6 months then it’s easy to see markets rallying over this period. However if it does, the correction will likely have further to run and go beyond the average recession sell-off (that we were close to at the lows last week) given the rich starting valuations.