MARKETSCOPE : Hanging In There 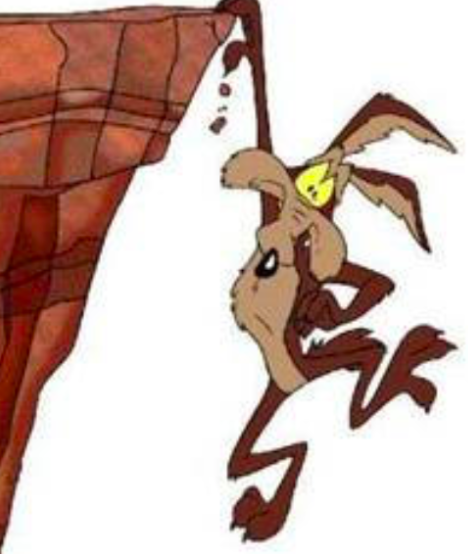 U.S. stocks were mixed in subdued action during the shortened week with many market participants still out for the Thanksgiving holidays. All three major indices ended the higher, with the S&P 500 Index finishing above the 4,000 level for the first time in two months.  while the 10-year Treasury yield ended the week at 3.72%. 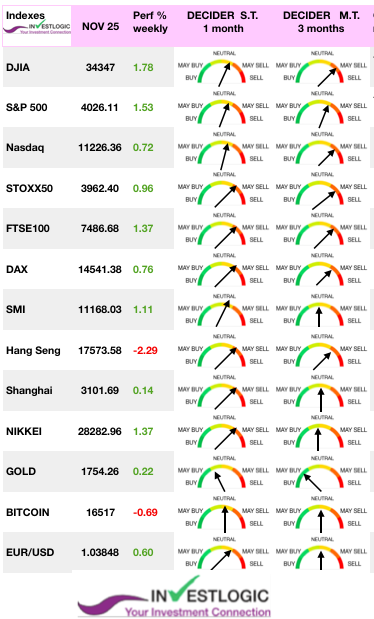 Of the 11 S&P 500 sectors, seven traded in the green, led by Utilities and Real Estate. Communication services sector topped the losers’ list. Apple, the top loser on the Dow, slipped on Friday off a report that iPhone production could be hit by worker unrest at Foxconn’s plant in Zhenghzou, China. This week’s top gainers include Imago BioScience, which soared after announcing that it had been acquired by Merck for $1.35 billion, which represents a nearly 107% premium. Merck wants to strengthen its presence in the field of hematology +105%.

This week will be busier, with many statistics. Investors will be looking for clues about the health of US household consumption, after Black Friday and Cyber Monday.Next week’s events will be a crucial test for the sustainability of the rally in rates, which looks to have its roots not just in markets’ fundamental reassessments but is also seeing technical factors at play.

The minutes from the Fed’s meeting said that a “substantial majority of participants” thought that slowing the pace of hikes would be appropriate, although the fed funds rate may end up higher than previously expected. Economic news was mixed, but signs of economic weakening generally seemed to support market hopes that the Fed would soon be able to ease its tightening pace. >> SEE below

It’s confusing but fortunately for equity markets, investors welcomed the minutes of the last Fed meeting. They saw signs that the central bank is becoming less inflexible in its stance on the pace of rate hikes. Next step is the highly-anticipated employment report on December 2. Economists expected 200K payroll additions in November and for the unemployment rate to hold steady at 3.7%. The jobs report will be crucial in setting rate hike expectations and terminal rate forecasts just ahead of the next FOMC meeting.

European shares rose for a sixth consecutive week on hopes that central banks might slow the pace of interest rate increases. Indeed, business activity in the eurozone shrank for a fifth month in November, adding to signs that the economy may be in recession. China is making the headlines as investors balanced new coronavirus restrictions  and some public riots against signs that authorities will provide more supportive measures to stimulate the economy.

This past week, the market jumped to the top of its recent trading range and continues to work in a consolidative manner. While the MACD “buy signal” is overbought, the market’s momentum is still bullish. Nevertheless, this rally may end soon, with the SPX approaching the 200-day MA and the recent downtrend upper channel marking a major resistance. Also  the 61.8% Fibo retacement of the last down leg. 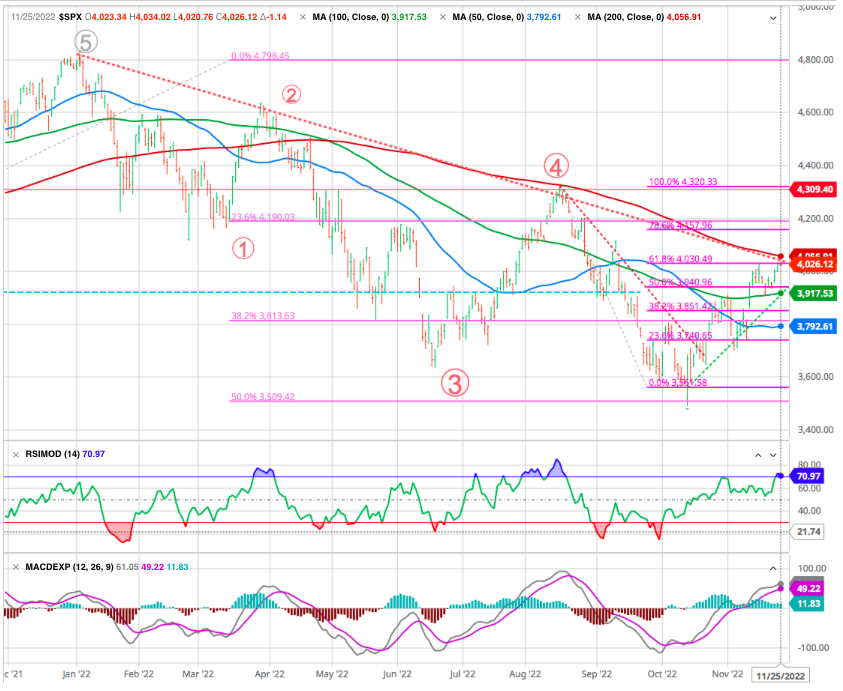 We are still in a clear downtrend in a bear market that crashed to SPX by 27%, but that may not be enough. We’ve seen several significant countertrend rallies since the downturn started.

These rallies can last months, and the previous bear market rally took the SPX up by 19% from its low. Therefore, gains will likely be limited and short-lived. Intermediate-term risk is still to the downside, and the next leg of the bear market could take the SPX notably lower.

However as most major US averages can’t even get above their 200-DMA, the DJIA is looking to break out to six-month highs.

The bear market probably didn’t reach the bottom at 3,500 in mid-October. There was not enough panic selling, no apparent signs of capitulation, and volume wasn’t high. We saw a textbook technical reversal off a critical support level. The market was oversold, and it was time for a rebound. The rally got exacerbated due to better-than-expected inflation numbers and other factors.

Despite the recent run-up, the upside potential in the current rally may be limited. As the challenging economic atmosphere progresses, higher interest rates should pressure consumer spending, decreasing corporate profits in the near term.

Valuations are still relatively high, and we should continue seeing multiple compression as earnings and sentiment decline in the coming months, as shown in the Schiler P/E index

Considering that many companies are going through earnings declines, we should see the downtrend in the CAPE ratio continue in the mid-term. It’s not likely that the CAPE will return to its historical mean at around 17, but we could see the CAPE come down to 23 or possibly even the 20 level.

The Swiss Stock Market presents about the same profile challenging the 200 dma as well as the one year downtrend channel and a long term resistance/support line(green). 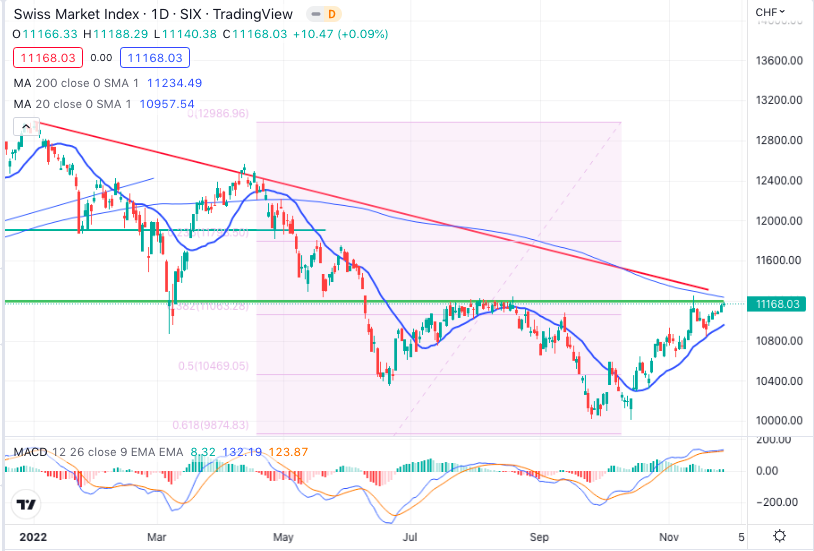 Europe, at the center of all sources of stress, has outperformed the U.S. markets and the EuroStoxx 50 is up more than 20% from its September low, theoretically indicating that the index has entered a bull market.

Europeans STOXX 50 index (as well as the other Euro indexes) is much more favorable as it is trading well above the 2oo dma for a couple of weeks. That line (blue) will serve as a potential support and the market might well test it. In the short term, the RSI is at extreme levels and a breakout could occur in the coming days. 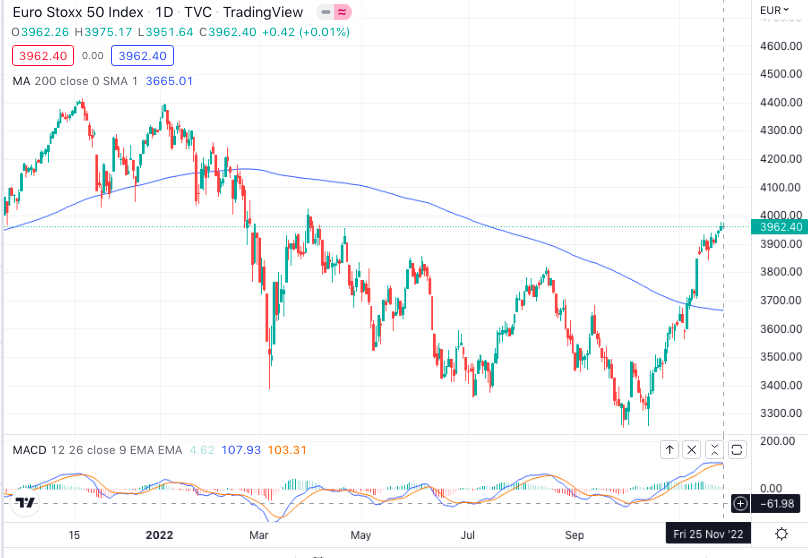 In precious metals, gold is treading water at USD 1,750. We shall probably trade in a narrow lateral range between the 200 dma and 50 dma in the short term. Prior resistance at 1680 has become a support. 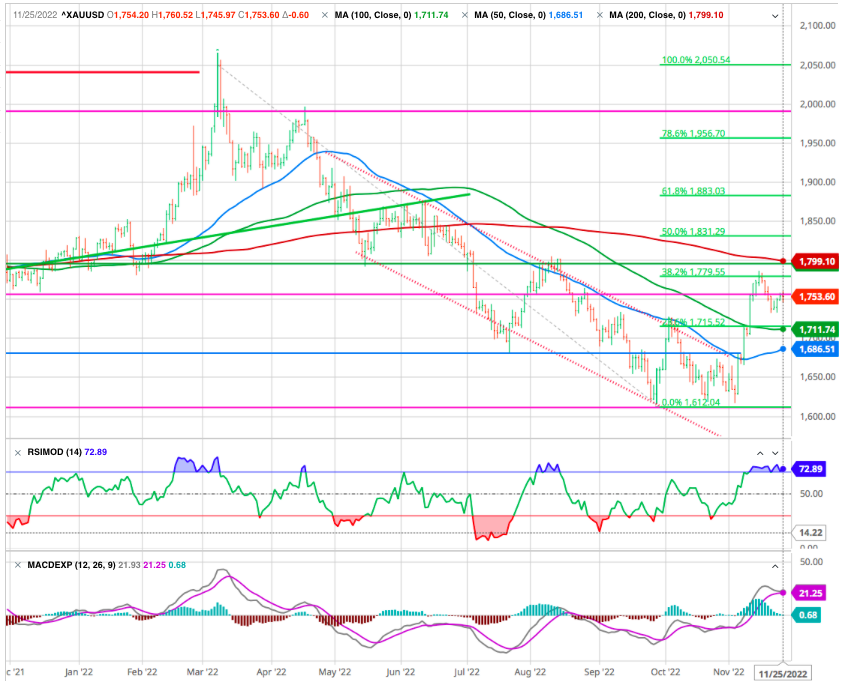 Also on the precious metals front, the World Platinum Investment Council is forecasting a deficit market for platinum next year, the first since 2020. The Institute points to strong demand from the automotive industry (whose needs are expected to grow by 3.3% year-on-year) while global supply is expected to grow by only 2%. Platinum is trading at around USD 985.

Cryptos : SEE our reports in Highlights

Bitcoin is still reeling from what happened with the FTX scandal. The digital currency is slightly back in positive territory this week, recovering +1.73% to hover around $16,500.

With confidence having completely evaporated from the cryptocurrency ecosystem, the digital asset market is likely to take many weeks to become attractive to a good number of investors again.

Binance is aiming for a roughly $1B fund for the potential purchase of distressed assets in the crypto sector and will make another bid for bankrupt lender Voyager Digital, according to CEO Changpeng “CZ” Zhao. Binance also said it intends to ramp up its commitment amount to $2Bln in the near future “if the need arises.” 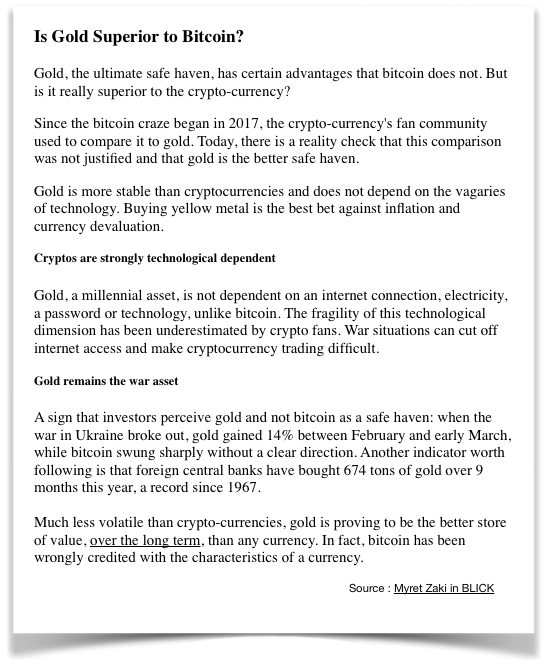 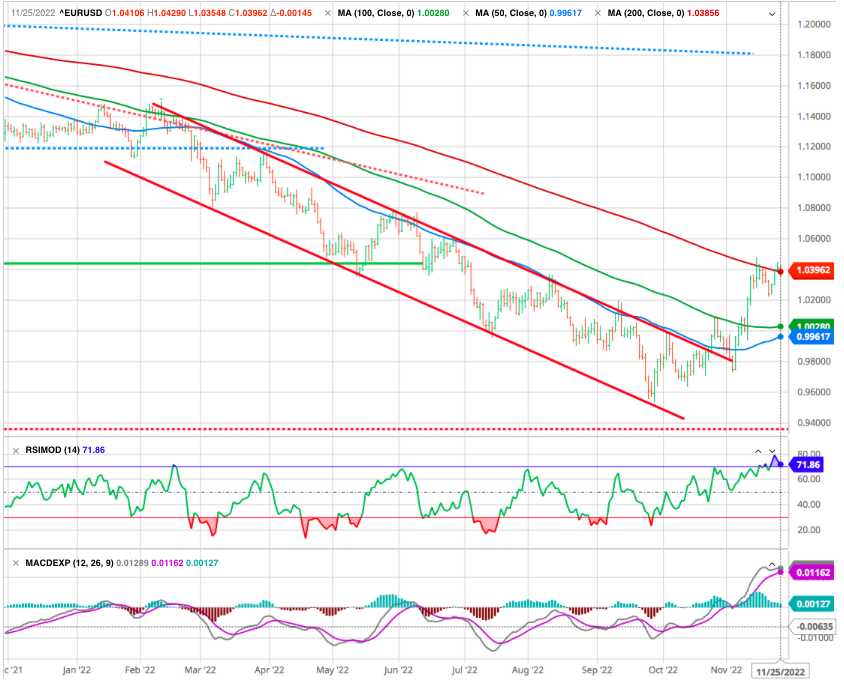 The Euro after breaking the downtrend chanel retest it before rising again. But it failed to break through the 200-day dma. A set back to the 50 dma level is possible. A key support holds at around parity.

FOMC Minutes : Markets May Be on the Wrong Side of the Fed Again 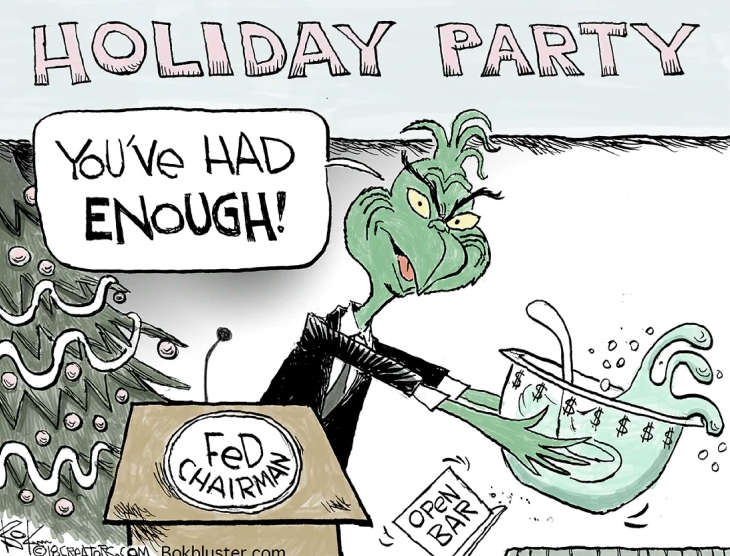 In the last FOMC minutes the idea that the central bank will have to respond to a growth slowdown as risks of financial system instability grow louder. The need to moderate on aggressive monetary policy requires some caution that it was the same usual chatter and only a perceived shift in tone.

Various Fed officials still said the persistence of inflation meant that the federal funds rate may have to go higher than they previously expected to achieve the central bank’s goal of bringing down price pressures. The word “inflation” was even mentioned 95 times in the minutes, remaining the primary focus on the gathering.

There’s about a 70% probability that we will see a 50 Bps increase instead of another 75 Bps move.  The minutes suggest the Fed will hike 3-times in 2023. Such will bring the terminal rate to 5.25%, putting immense pressure on consumers via higher credit card payments.

While there was no mention of a “pivot” or a “stall,” investors seem to like the idea of a slower pace of rate hikes. However, they overlooked the Fed’s statement, increasing rate hikes in 2023. Even at a slower the pace of rate hikes, they are STILL hiking rates.

When was the last time you saw the cost of borrowing increase by so much so quickly? It takes time for interest rates to impact the real economy.

And history suggests that earnings tend to revert to the long-term growth trend suggesting a rather significant economic contraction, as Lance Robert noted : 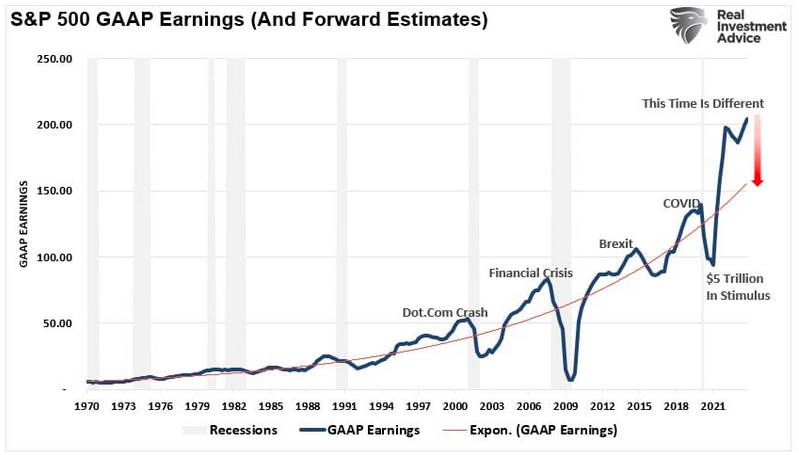 Given the most aggressive Fed rate hiking campaign in the last 40 years, it’s difficult to fathom the economy could avoid a recession in 2023. Therefore, we are still waiting to see the full effects of the Fed’s tightening, which should lead to more pain for the stock market in the months ahead.

Jay Powell is due to speak on Wednesday, November 30 It is a critical make-or-break moment for Powell, similar to the Jackson Hole speech. He needs to double down on that speech and tell investors that the labor market is too tight, inflation is too high, and that he will do whatever it takes to get inflation back to its 2% target, no exceptions.

Powell needs to push back against the recent trends in the market of lower rates, a weaker dollar, lower implied volatility, and higher stock prices. He needs financial conditions to tighten, and he needs them to stay that way to avoid further easing and the undoing of everything the Fed has accomplished this year.