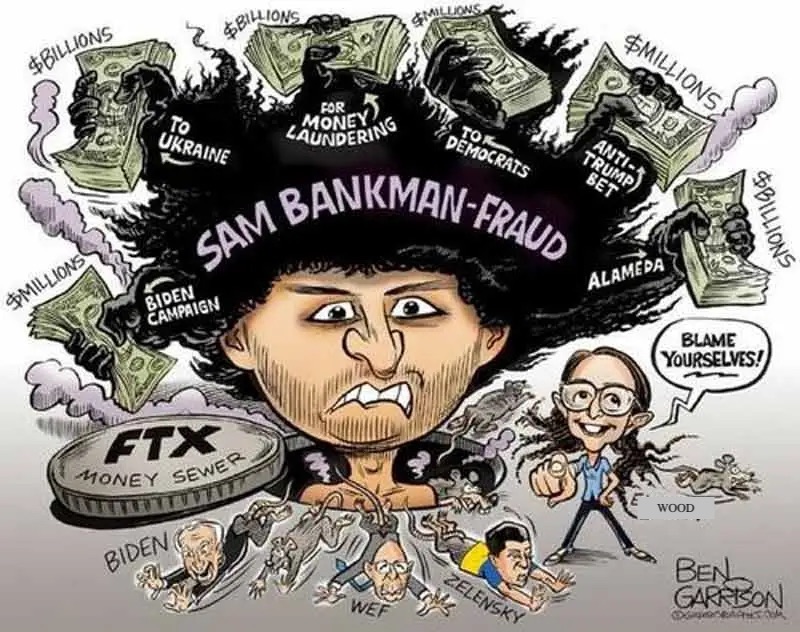 As an investment, cryptocurrencies make very little (if any) rational sense; in fact, there’s little reason to believe they are anything more than elaborate ponzi schemes. What they do offer, however, is a strong sense of community, a feeling of intellectual superiority, hope of an easy path to financial freedom and, perhaps most importantly, the thrill and agony of wild volatility.

It’s no secret how Warren Buffett has been so successful over the course of his career. In fact, he has made it priority to share all of his “secrets” with anyone willing to take the time to simply read them. The trouble is his philosophy is intolerably dry and the process of investing as he does is infinitely boring to the vast majority of people in the world. The truth is that most don’t want to succeed in the markets as much as they want to be both thrilled and agonized by them. Look at the cryptocurrency craze.

The U.S Treasury yield curve inverted further during the week, driving the inversion in the two-year/10-year curve segment to its deepest level in over 40 years. The yield curve is still inverted in the US, a sign that the market is anticipating a recession.

Short-term U.S. Treasuries repriced to higher yields, particularly after James Bullard said that the Fed’s terminal policy rate should reach a minimum level of 5% and may need to go as high as 7% to achieve the central bank’s inflation objectives. The Boston Fed’s Susan Collins followed up on Friday that she was not ruling out a 75-basis point rate hike in December.

In Asia, mainland Chinese stocks were modestly positive for the week while Japanese stocks fell.

Investors face a holiday-shortened  week that could see lighter trading volume. The highlight of the economic calendar looks be the release of the minutes of the last FOMC meeting.

MARKETS : Uncertainty and The ‘R’ Word

Remember the 2000 ‘Dot-Com Super Bowl’, The dot-com Super Bowl was the high-water mark for this first wave of web-based companies, most of which wouldn’t exist within just a few years. The going rate was $2.2 million for 30 seconds of air.

This year, so called Crypto Bowl, marked a new milestone for the crypto community as FTX, eToro, Crypto.com and Coinbase debuted crypto ads during Super Bowl 2022 for a 30 second spots sold for a record $7 million.

As of our early October call :

“Our sense is that the US stock market will not bottom out before Tesla and Apple break down decisively.

We also think that before asset markets bottom out, we will see somebody or something “BIG” go out of business (ie Crédit Suisse) and the revelation somewhere of a massive fraud, which would badly shake confidence.”

The latest crypto fraud might well be one of these main events. The other is the Big Tech revaluation and Tesla is certainly not is not immune from a major correction with a first target at 130 (red horizontal line) : 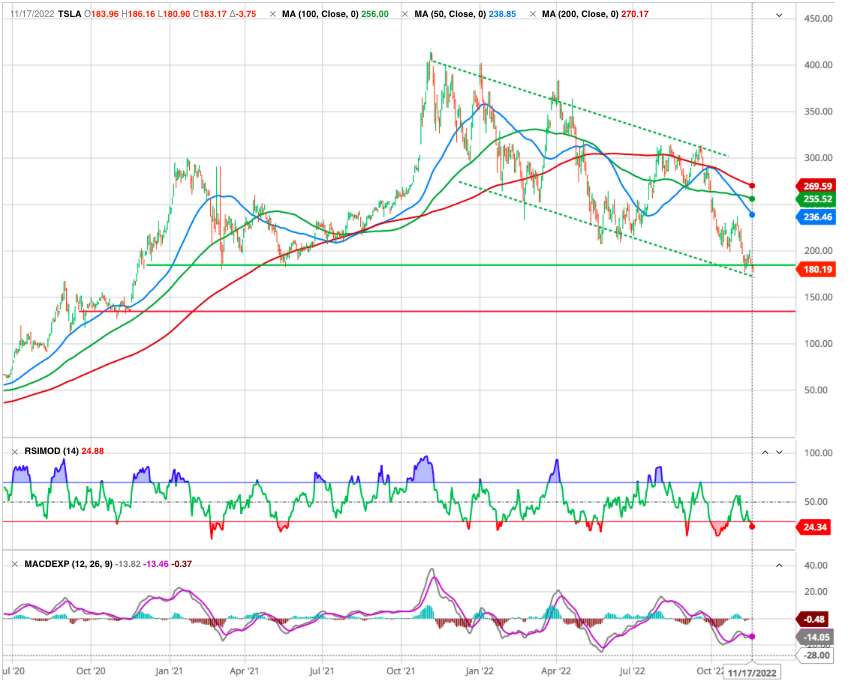 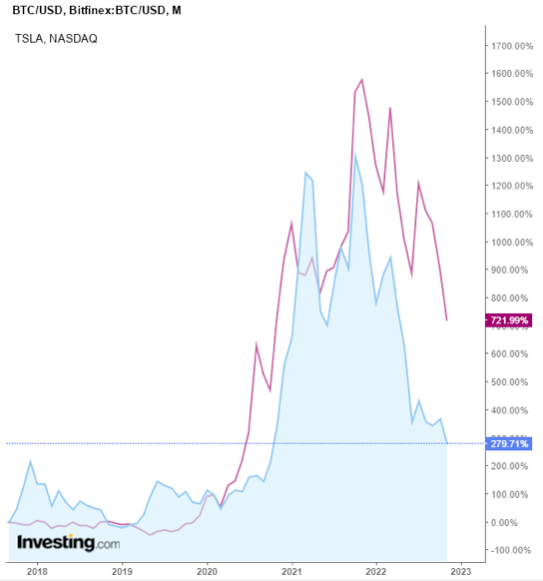 As we are heading toward the bottom  Tech mega-caps still represent an outsize portion of the S&P 500. 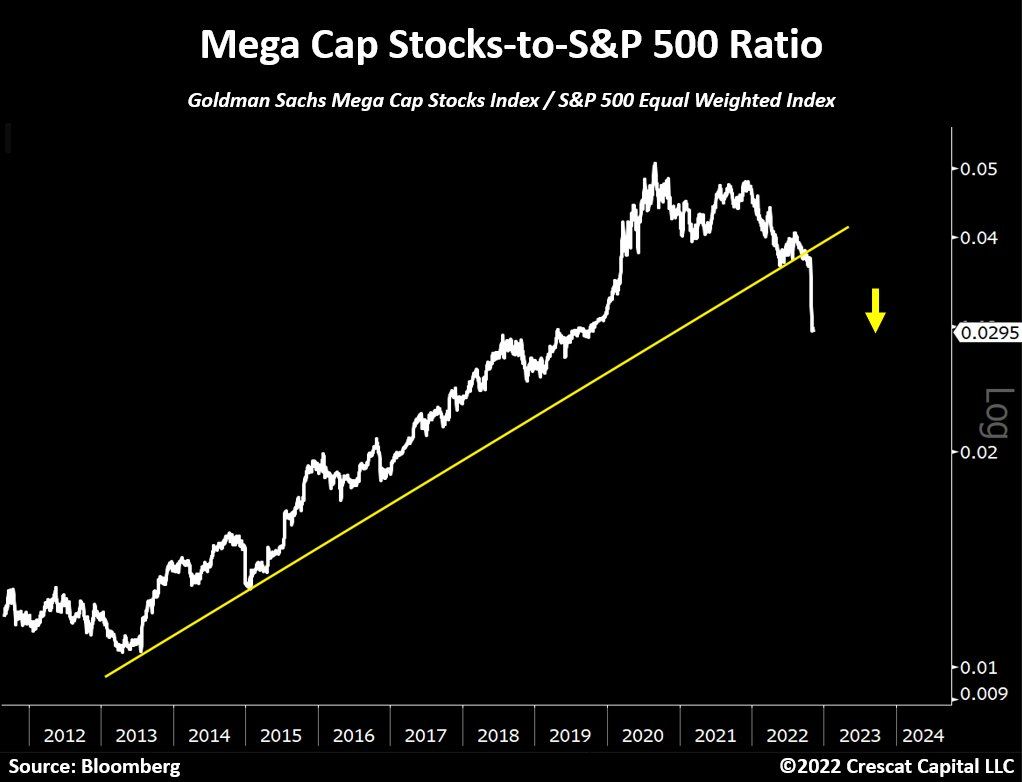 Tough talk from Federal Reserve officials -see below- knocked the markets back a bit. However, despite those comments, the sell-off was mild, holding above critical supports heading into the holiday-shortened and light volume trading week. Seasonally the short week of Thanksgiving is bullish.

The market tested, and held, 100-dma (green). With the market contained in a rising trend channel, this all suggests the bulls remain in control for the time being. The s.t. resistance at the 200 ma level (red). Our MACD indicator remains positive. 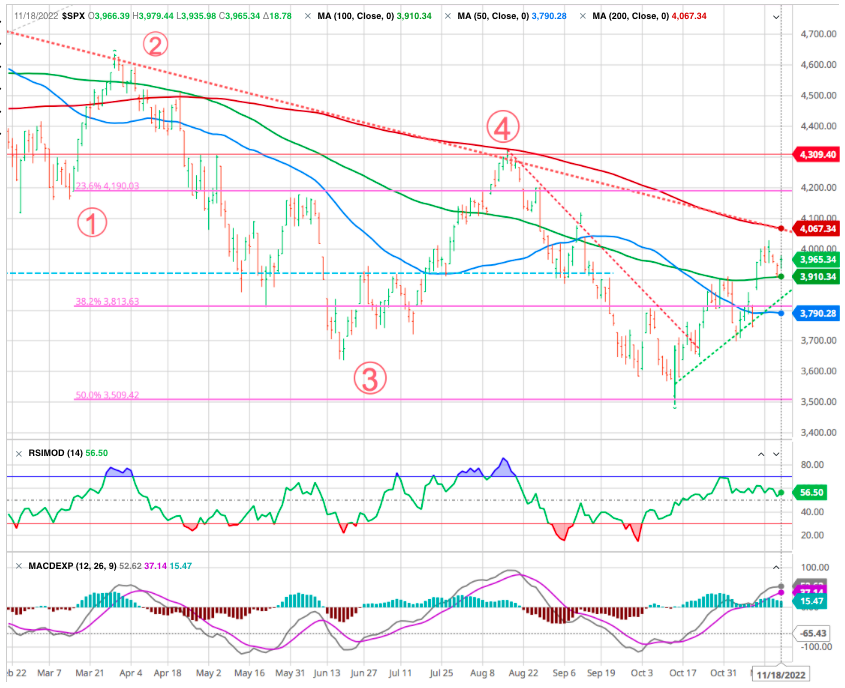 As for the Swiss Market Index the 20 dma (blue) played its role as alternatively resistance and support. 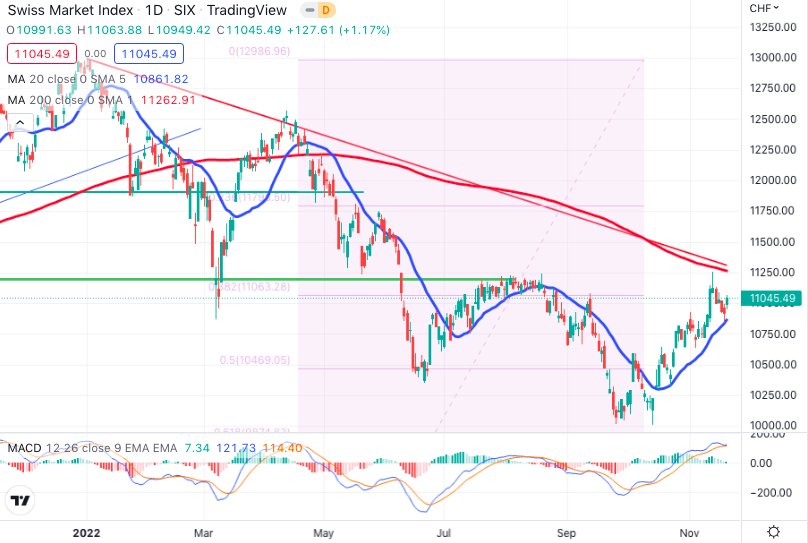 However, there is a problem with this bullishness as the market rally works against the Fed’s goal of tightening monetary policy to reduce inflationary pressures.

The tough talk is an attempt to reduce the market’s continued hope for a “pivot” in Fed policy. The problem with a Fed “pivot,” is that such will likely occur when it is least bullish for equities. To get inflation under control, the Fed must contract economic activity. Such is already happening and is beginning to show in deepening inverted yield curves. 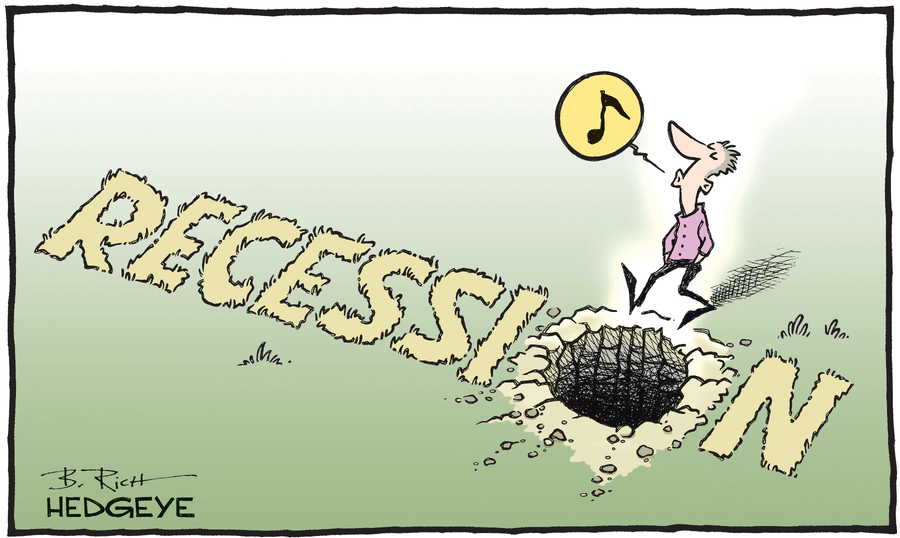 Notably, while investors are hoping for a “Fed Pivot” to boost stock prices, the inverted yield curves are warning differently. Now consider the strong comments made by Fed officials every time we have had a spike in stock prices over the last few months. This is the very essence of FED talking down the markets.

“Somewhere between 4.75 and 5.25 seems a reasonable place to think about as we go into the next meeting. And so that does put it in the line of sight that we would get to a point where we would raise and hold. Pausing is off the table right now, it’s not even part of the discussion. Right now, the discussion is, rightly, in slowing the pace.” – Mary Daly To CNBC

On Thursday, St. Louis Federal Reserve President James Bullard said the central bank still has a lot of work to do.

Once again, the recession and bear market thesis is still in full swing with lower lows on the way this year. That is why a recent Wall Street Journal survey showed that market experts now have a 65% expectation of a recession coming within the next 12 months.

For these reasons, and many more, we still believe that 2,800 to 3,200 is the basic range of this bear market’s bottom.

The following equations showing the important connections and correlations is the quickest way to spell it out:

At nearly 8% inflation, the Fed is not close to a pivot with unemployment at historically low levels. As such, investors need to pay attention to what the yield curves are suggesting.

Such is an important statement given current economic conditions. The Federal Reserve controls the short-end of the yield curve (1-month to 2-year rates.) However, the economy, wages, and inflation control the long end of the curve. Therefore, as the Fed continues to hike rates, such will increase the number, and the depth, of inverted yield curves. Notably, the inversion of various yield curves is essential to both market outcomes and the economy (aka recession).

Historically, this scenario is always followed by a recession. But for how long and how deep? The duration of this spread in negative territory is usually a good indicator of the depth of the recession that follows.

We remain attentive to this data. Based on both the depth and length of the current yield curve inversion, it appears clear that the economy will face a recession sometime in the future.

The #2y10y treasury yield curve reached a 60 bps inversion, this is the steepest inversion since 1982. The inversion of the yield curve has been a reliable leading indicator to predict a recession. 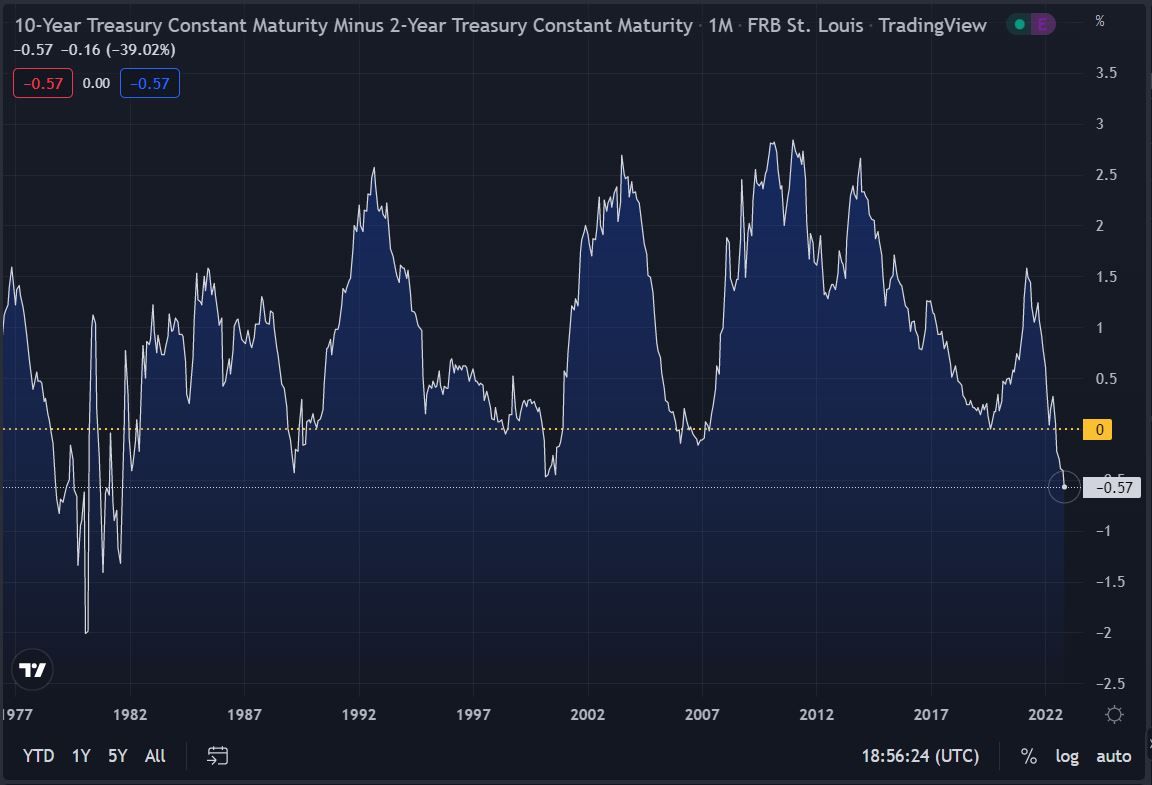 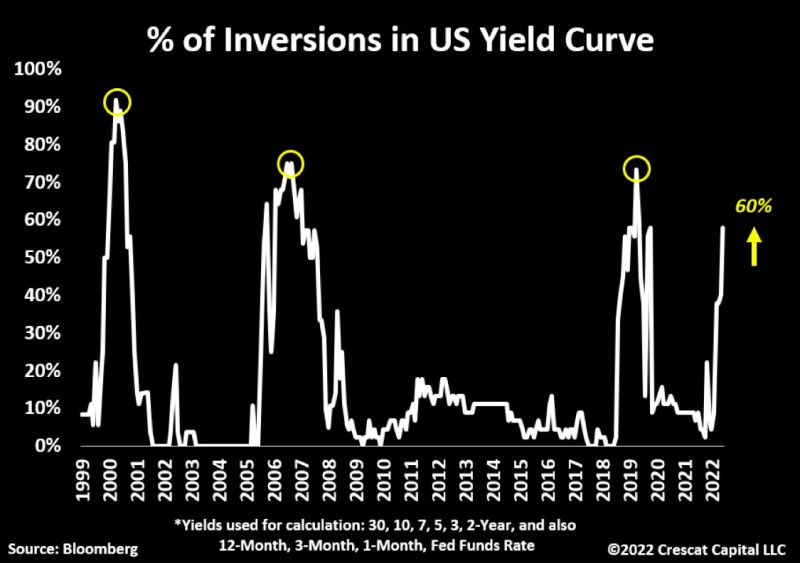 We have never seen the market bottom with 60% of inversion in US yield curve (see graph above).

All that recession risk pressured the reality-check in stocks. While using the “yield curve” as a “market timing” tool is unwise, dismissing the message entirely is just as foolish.

Rolling 200-day correlation between sp500 (blue) and 10y U.S. Treasury yield (orange) has fallen to lowest (most negative) since December 1999. 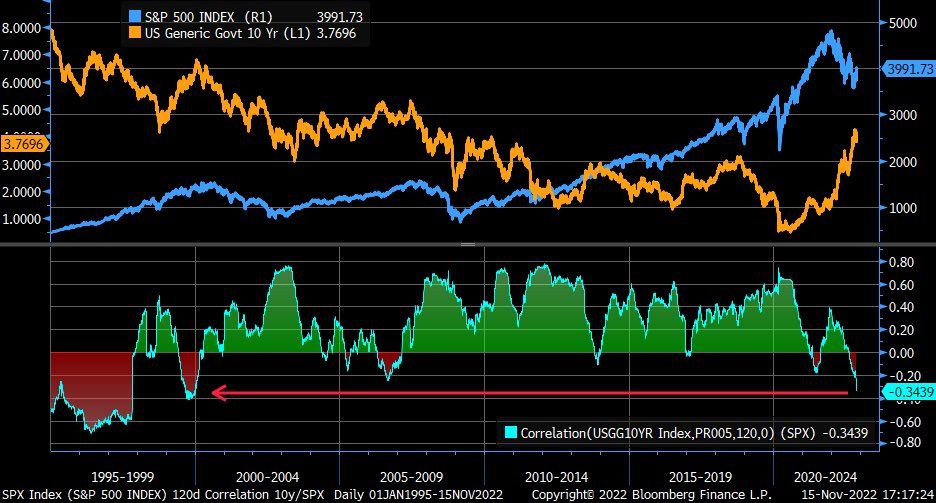 The major market indexes still have some significant work to do before conservative investors can feel comfortable taking on more risk again. Simply stated, you should expect more stock market downside in the weeks and months ahead.

Oil prices gave up some ground this week. The rise in geopolitical tensions in Ukraine, which are usually accompanied by a rise in oil prices, was only short-lived. Prices were  more oriented by the forecasts of OPEC, which lowered its oil demand forecasts once again due to the slow reopening of China, still penalized by its zero-Covid policy. The cartel, which painted a bleak picture of the global economy, has weighed on investor sentiment. The barrel of Brent and WTI are trading at USD 86 and USD 79 respectively.

After taking a -22% drop last week, bitcoin has stabilized this week around the 16500 dollar mark. FTX’s fall last week continues to worry economic agents exposed to the crypto-currency market, as evidenced by liquidity withdrawals on exchange platforms. In addition, the domino effect caused by the FTX collapse continues to spread, with international players showing significant signs of feverishness. -see below-

FTX Fallout Story: what goes up must come down

The bigger story is hiding right under our noses. 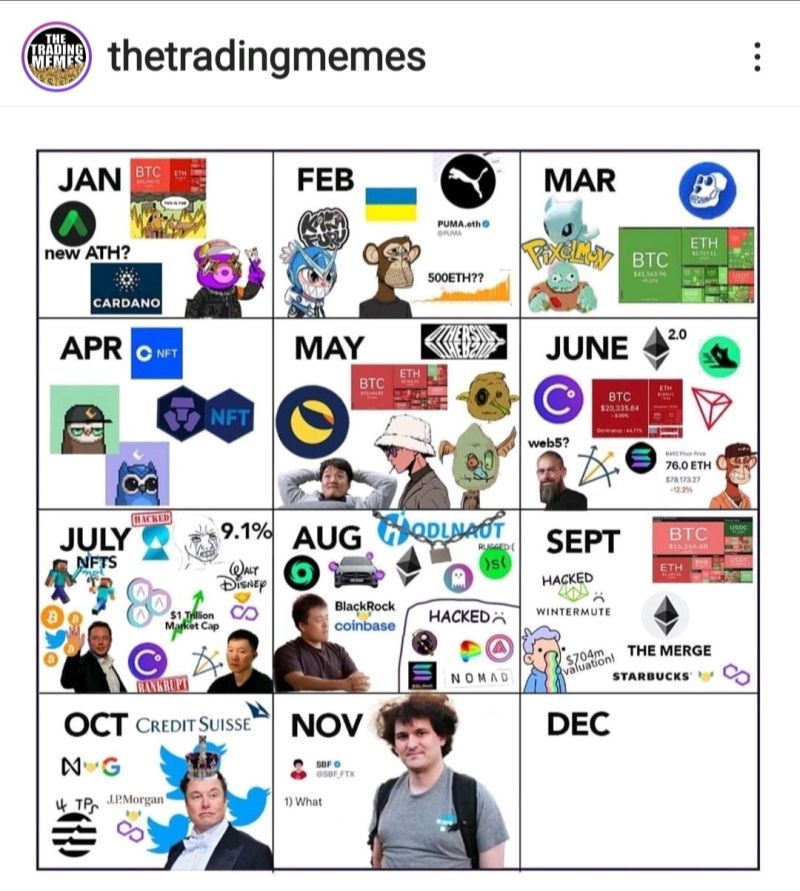 The collapse of the cryptocurrency exchange FTX continues to reverberate, as Genesis Block, a leading cryptocurrency retail service provider in Hong Kong, announced Friday it was ceasing trading.

“We have ceased trading, as we don’t know which counterparties would fail next, so we would rather close out all our positions to regain some of our liquidity,” chief executive Wincent Hung said, according to Reuters.

A broader failure at Genesis could have a huge impact on companies that give customers yield by going through Genesis, which lends cryptocurrency to funds, according to Jason Yanowitz, co-founder of BlockWorks Group. “If you’re a CeFi platform that offers yield, you probably use Genesis,” he tweeted. “FTX hurt liquid funds and consumers,” Yanowitz said. “Genesis impacts nearly every company in crypto.”

From the same guy who did the Enron bankruptcy on FTX: ‘Never in my career have I seen such a complete failure of corporate controls and such a complete absence of trustworthy financial information as occurred here. From compromised systems integrity and faulty regulatory oversight abroad, to the concentration of control in the hands of a very small group of inexperienced, unsophisticated and potentially compromised individuals, this situation is unprecedented.’

See report and our analysis in Behind the Crypto Scam

Regarding the assets, ‘a substantial portion… may be missing or stolen’

To the new CEO’s knowledge, basically none of the financial statements of Alameda Research or seemingly their other ventures have been audited. 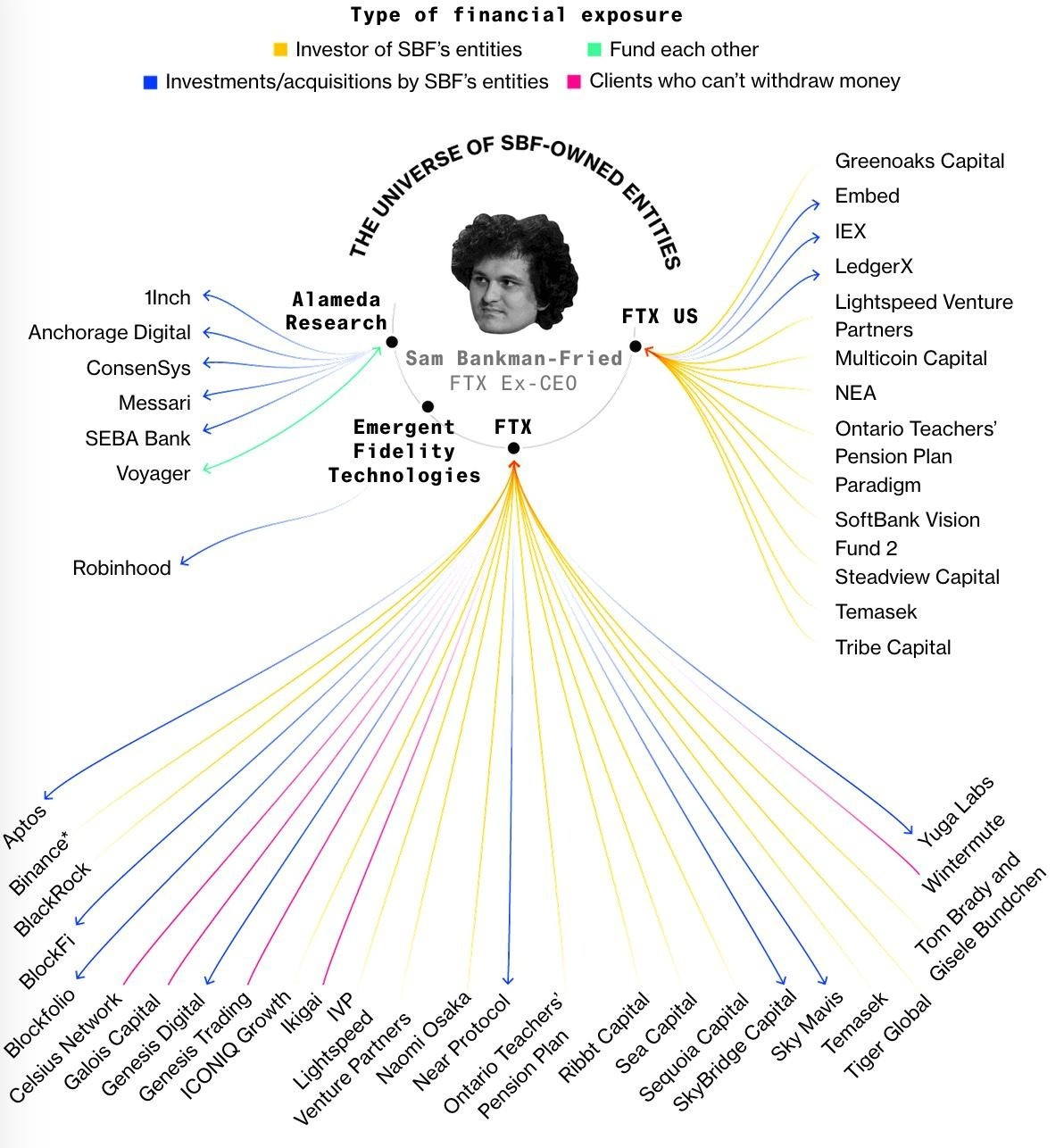 It has been 10 days since FTX filed for bankruptcy and it became obvious to everyone that it was a massive criminal fraud. Nobody has been arrested. Sam has confessed to numerous felonies via text messages. Bernie Madoff was arrested within 24 hours of his fraud being revealed.