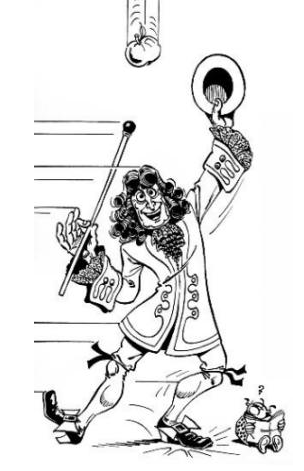 It was another volatile week in Wall Street as the S&P 500 recorded losses for the sixth week in a row – the longest negative stretch since 2008. Investors appeared to grow increasingly skeptical that the Fed will be able to achieve a “soft landing” for the economy.

n Wednesday, US inflation data weighed on sentiment as headline numbers fell back a bit from March’s pace but not as much as expected, rising 8.3% y/y versus consensus estimates of around 8.1%. Stocks bounced higher on Friday to close a chaotic week in the financial markets. But Friday’s gains were not enough to erase sharp losses for the full week, as investors worried about the Fed’s ability to turn back raging inflation without knocking the U.S. economy into a recession.

Shares in Europe rebounded from earlier weakness to finish higher, despite ongoing concerns about inflation and ECB’s Lagarde hinting at potential rate increase in July. Chinese stocks rallied as a fall in covid cases and reassuring comments from the securities regulator lifted investor sentiment.

Jerome Powell (aka King of Pain) might as well be singing the chorus of the Police’s legendary song (bonus at the end). In his last two speeches, the President of the US Central Bank warned us about the pain of the process underway. The Fed hopes to achieve a soft landing following several rate hikes, limiting the damage on growth. But if the landing is more like a big BOOM , a recession could set in. This scenario is particularly feared by investors.

Is the king of pain really able to pull off off this feat? Isn’t the Fed a little late in raising rates? Only time will tell. In any case, this week has shown us that the market is rather dubious about a soft landing, and believes rather in a painful landing.

MARKETS : The ‘Buy the Dip’ Era Could Now Be Over

As volatility grips markets, investors are naturally wondering when the selling will abate and the bottom will be put in. ‌According to a number of pundits, the answer is probably not quite yet.

In his book “The Black Swan”, Nassim Taleb says it makes no sense to forecast. He says it is better to drive with no map than drive with the wrong map. However, he does recognize people in some professions need to do so. We at least can understand what is happening and why it is happening and decide how to respond.

The point today is not to get everyone to sell. The point is to get us to think about what could happen, if the bear case plays out. The point is to ask ourselves if we can withstand that & react offensively not defensively then. 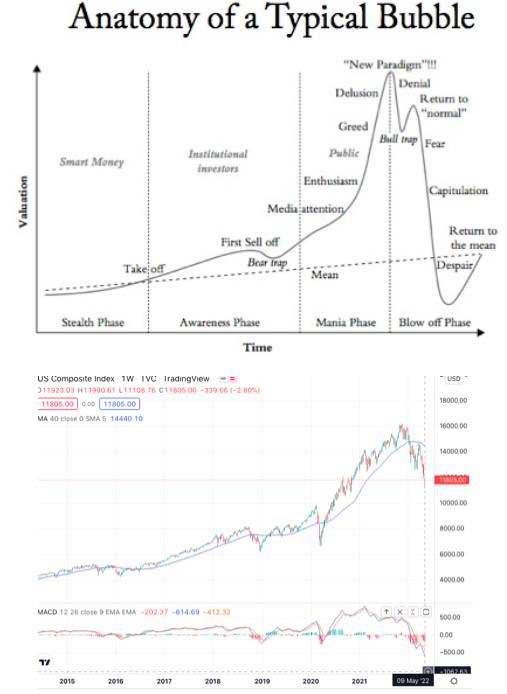 So, if it is a scenario that could play out, is your portfolio prepared for it? Even if you only put a 10-15% probability on this outcome, can you withstand it? Or will you be among those who are capitulating and selling when we are there, even though we can see an outcome where we go to that level now. -See our latest STRATEGY Update-

The critical point is that at times like this, we make the majority of our investing mistakes. Patience and discipline are challenging things in portfolio management, and our emotions often lead us astray.

The market will likely rally sharply right after you sell everything and go to cash.

Notably, growth stocks remain under tremendous pressure as higher inflation and rates led to a severe repricing of risk. The “meme” stocks that led the liquidity-fueled feeding-frenzy following the pandemic are most notable. 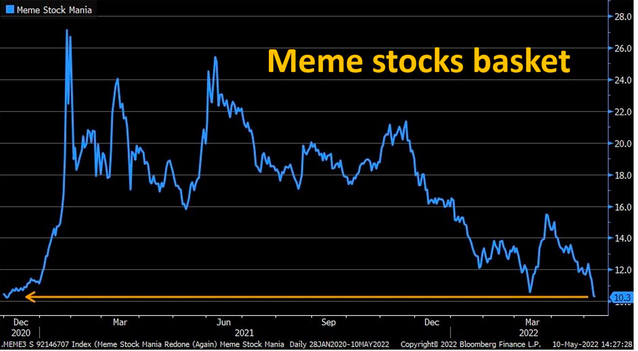 The proxy, or say poster-child, for these companies remains the ARKK Innovation Fund. ARK  Invest Fund performance, which is now below the S&P500 returns, is another irrational and painful behavior : 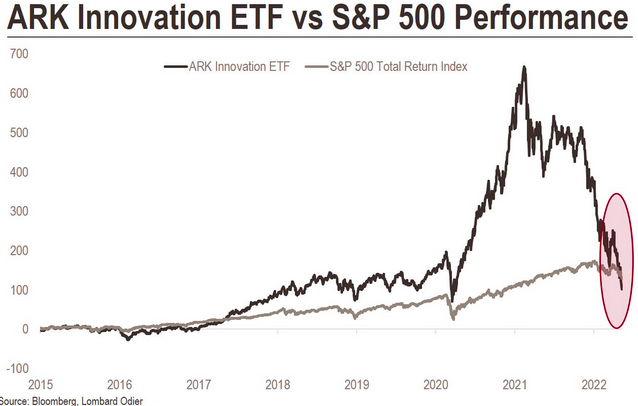 Liz Ann Sonders is the chief investment strategist at Charles Schwab  pointed that today’s stock market is far more tied to the economy than ever before. Last week  she  tweeted a chart of the “Buffett Indicator,” which is the stock market’s total value as a percentage of GDP. 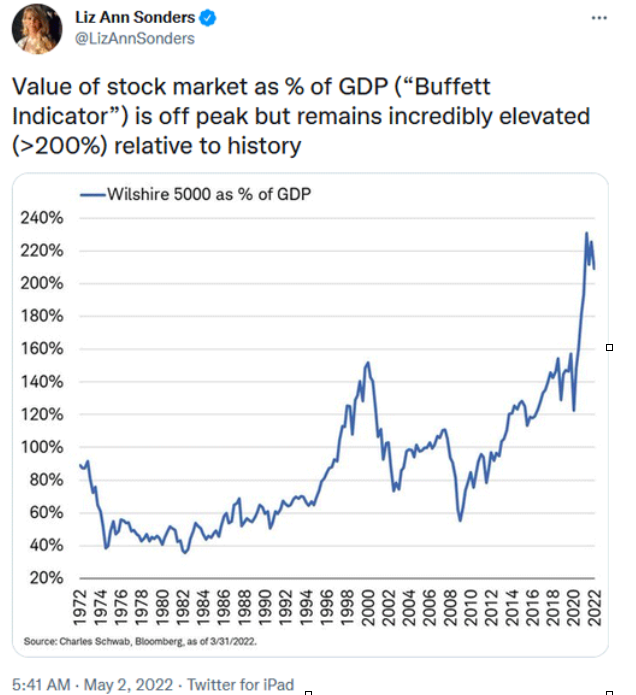 As you can see, the ratio zoomed higher since 2020. We do not foresee it staying there. Bringing it down will probably happen via lower stock prices and a smaller economy, the journey to which won’t be fun.

If So Bearish; It’s Bullish ?

Lower CPI could stabilize the market, but the gravity that tightening will bring upon economic and earnings data will quickly offset that as the slowdown continues. We are nowhere near the end of risk-off leadership. Currently, stocks are down 16% or more, depending on the index, and bonds are in the most significant drawdown since the 18th century.

Being a contrarian is difficult. Such is because, during market declines, we don’t know where the bottom is. Indexes touched important supports and might react on the short term in a bear market rally. Specific indications suggest the market is oversold enough for a tradeable rally. 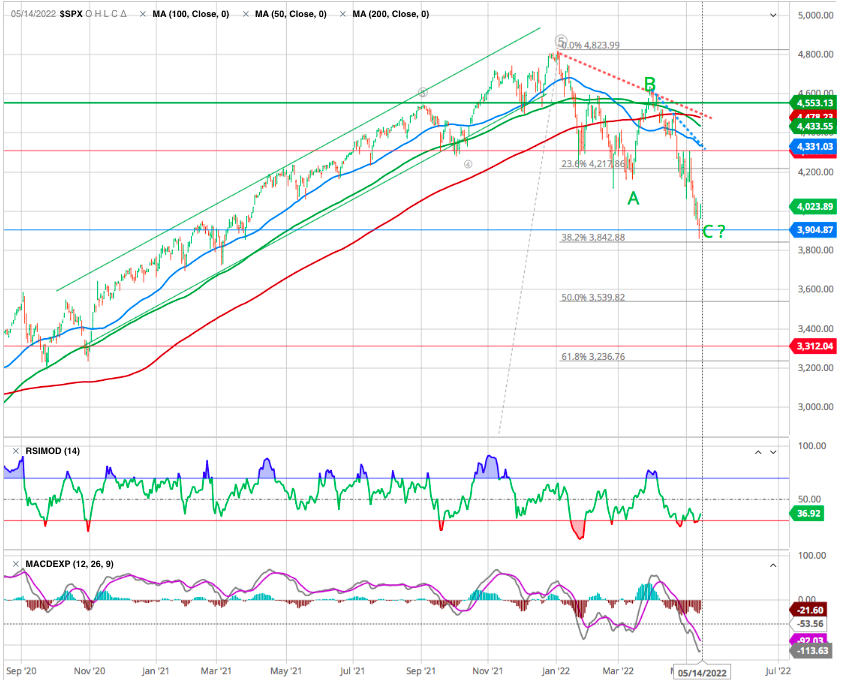 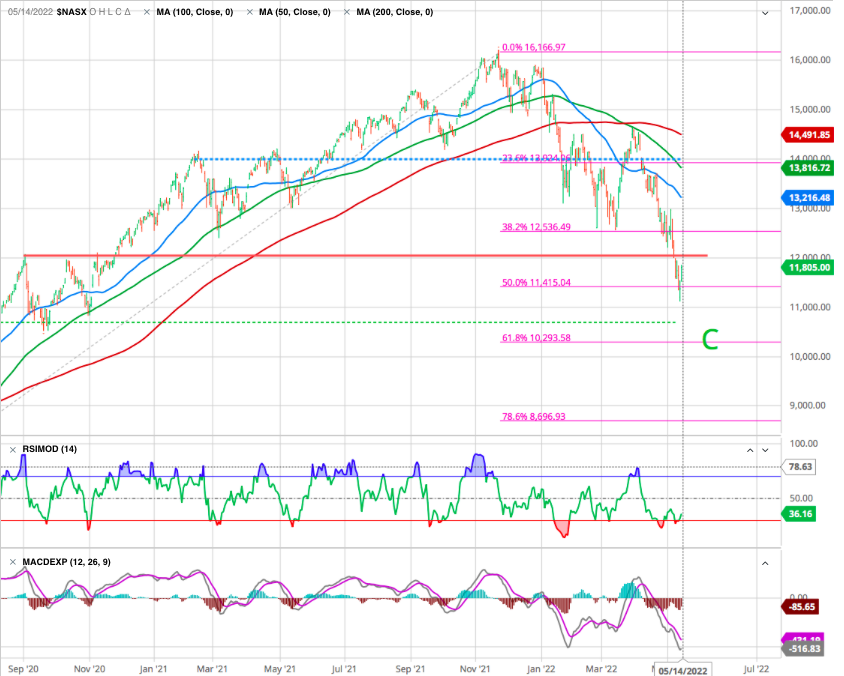 ie : Only 16% of NASDAQ stocks are trading above their 200 DMA, getting close to levels of prior market bottoms (still will not call it, but here for your thoughts). 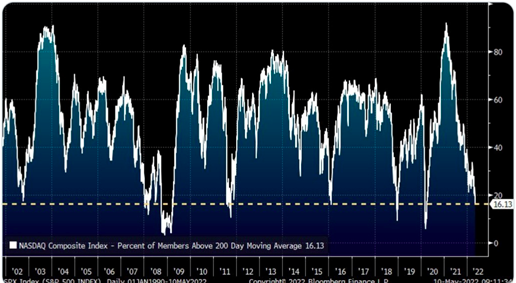 For the Swiss marketa set back to 11900 before testing the lows at 38.2% is posssible 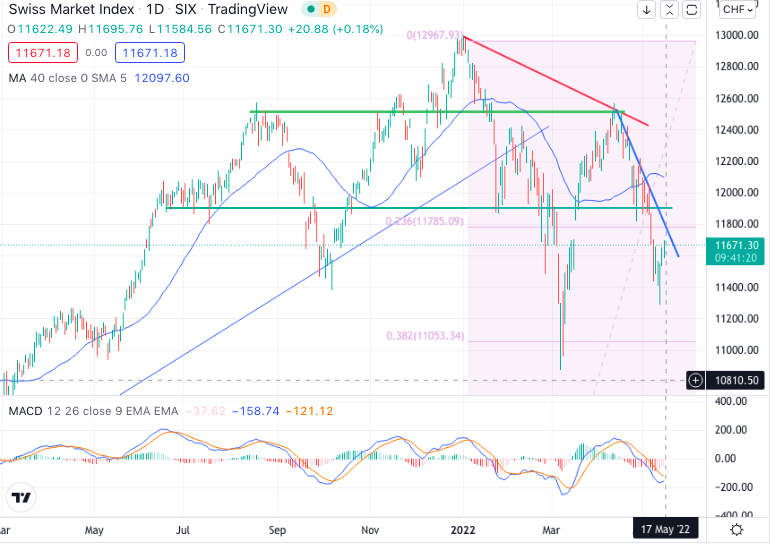 As noted today by Bloomberg editor John Authers “Switzerland should be less prone to serious producer price inflation (and its currency, regarded as a haven, should do well in times of global trouble). Vincent Deluard of Stonex Group Inc. points out that producer prices in Switzerland, whose exports concentrate on luxury goods and pharmaceuticals, both of which are relatively unaffected by surging raw materials, are inflating radically less than in Germany”.

If stagflation takes hold, then that promises to be awful for German industry. Swiss stocks, according to the MSCI indexes, have outperformed of late (shown on the left-hand scale),  while they now trade at a higher multiple of prospective earnings. But it’s easy to imagine the trade being taken further. 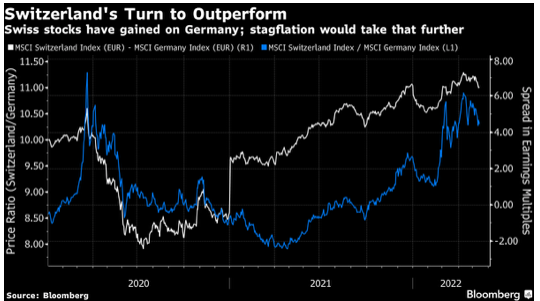 Overall as you can see we are not at “THE” bottom just yet, as we still did not get any panic selling in an actual capitulation, which would present a more compelling case that stocks had reached a bear market bottom. So any potential relief rally from the current deep pessimism would be just that, a relief rally.

Reviewing our sector charts we can definitely call that the value related sectors such as Staples, Materials, Health Care are well positioned, as well as Energy. 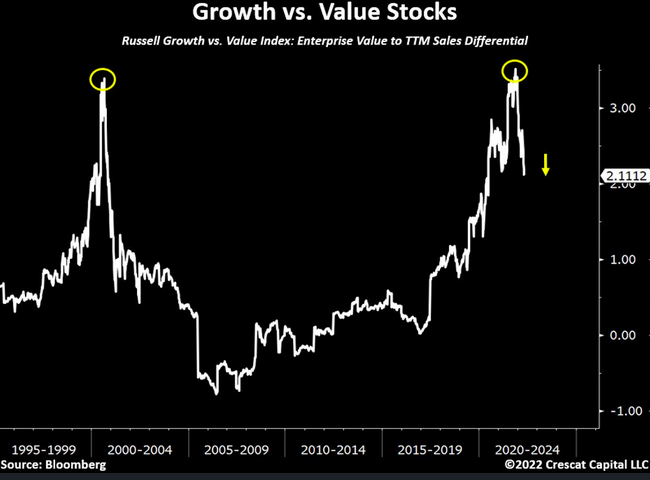 The value dominance will accelerate now that the FED is raising rates, plus value stocks are simply cheaper than growth stocks.

The retail sector will dominate the earnings calendar with Walmart , Target  Home Depot, Lowe’s and Macy’s all set to report. The report on retail sales is also one of the bigger economic updates expected to drop.

Oil hovered between USD 100 and USD 110 for the two global benchmarks, Brent and WTI.

In precious metals, gold is moving away from the USD 2,000 mark day by day, weighed down by the rising dollar and rising bond yields.

The digital assets market has not escaped the stock market purge of last week. Cryptocurrencies crashed on the back of the Terra-USD stablecoin implosion, further suggesting a strong risk-off environment. In the wake of global indexes, bitcoin is shedding more than 10% of its capitalization this week and is back to below $30,000.