ancial markets experienced a violent air pocket on Monday on the back of fears of monetary tightening, before trying to regain some height for the rest of the week, while the Fed announced that it would start to raise interest rates in March. Nevertheless, volatility tends to intensify, with erratic movements of strong amplitude on most indexes. However, the results of several emblematic companies provided some comfort.

For now, U.S. markets, which drive the rest of global market, are only as strong as the behemoths that make them up. Market giants such as Apple and Microsoft have all three published excellent figures. Let’s remember that bear markets are an integral part of long-term investing. Trying to anticipate them is illusory.

The correction that started at the beginning of the year, which was accentuated last week, continued. Equity markets remain volatile and whipsawed once again around post FOMC press conference. Technology stocks are once again in the eye of the storm, after a first Fed 2022 meeting.

But the US market ended the week positively, erasing the week’s losses as it resit on the identified support  (4333) . The markets do look to be stabilizing, as shown below, and are holding the October lows. That 100% Fibonacci retracement, and multiple rally attempts recovered 23.6% (4440). And should go on  reflexive short term  rally to the 100 DMA equalizing the 50% (4567). Although we can expect a 3rd corrective wave down after it. 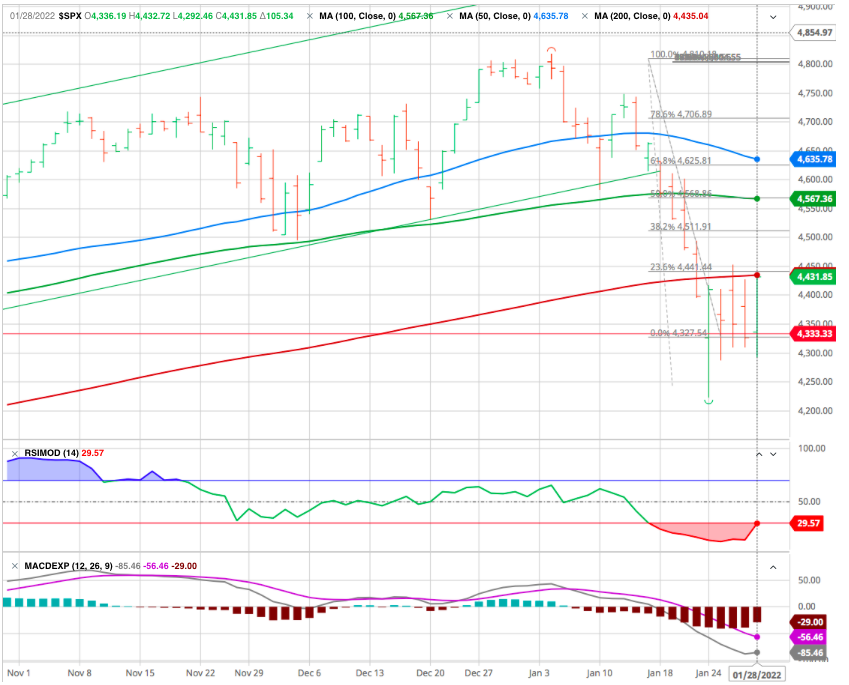 The prospect of a rate hike in March, tensions in Ukraine, inflation, the sector rotation towards value stocks… Does this mean the end of growth stocks?

Nothing is less certain, given that investors are anticipating a slowdown in growth and could start buying growth stocks again. The Russell 2000 index, which is usually a step ahead of the market, has entered a bear market (i.e. it has fallen more than 20% since its 52-week high).

Bond yields are on the rise, but not excessively so: 1.84% for the 10-year T-Bond The Swiss signature is symbolically back in the green (0.01%).

were battered this week, penalized by the Federal Reserve’s statement, which strengthened the greenback and bond yields, much to the dismay of gold. In a sign of capitulation, gold is once again trading below the USD 1,800 per ounce mark. This sharp decline is also affecting silver and, to a lesser extent, platinum. It should be noted that palladium remained well positioned this week due to Russia’s significant weight in the production of this metal, which accounts for nearly one third of global supply.

It also strengthened the greenback. It took USD 1.1137 for 1 EUR at the end of the week, compared to USD 1.3 a few days earlier.

On the bitcoin side, crypto-investors are holding their breath. They are still not safe from a further plunge in the price of the digital currency. Although the price is currently stabilizing around $36,000, after a drop of almost 50% in just over two months, the digital gold’s valuation could still go off the rails. Even if the last few days have been punctuated by the integration of blockchain-nft solutions into well-known services such as Facebook, Instagram or Twitter, it is clear that these announcements have not had the impact on the price of cryptocurrency that was anticipated.

Bitcoin’s raison d’etre is to provide an alternative to central banks. The system of enforced scarcity, with no ability for any central banker to fiddle with monetary conditions, is one of the cryptocurrency’s greatest attractions. Many buy it as a hedge against feckless behavior by the Fed, and there is sense in doing this. 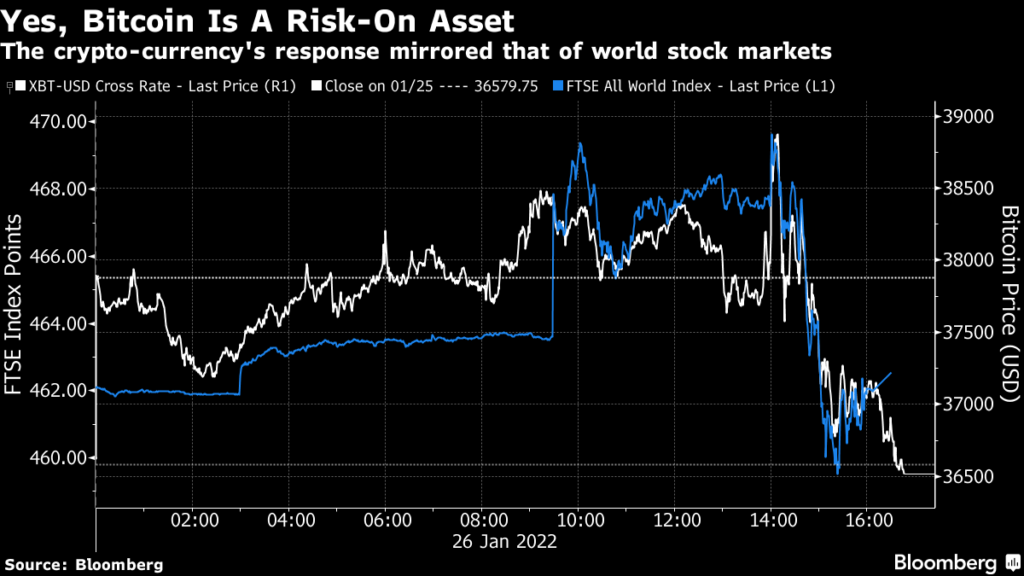 However, Bitcoin is increasingly being traded as a risk asset. It does well when stocks are up, and joins in the selloffs when markets are “risk-off.” It’s great when risk is on. On a day like last Wednesday, it offered no protection in the turmoil. Bitcoin is a radically different asset, but at present it’s trading just like conventional stocks.

What we’ve seen so far are double-digit declines over a very short period, largely on fears related to inflation, rising interest rates, the pandemic, and geopolitical flare-ups. In other words, investors are worried about recycled, widely-known, and understood fears – a classic sign of a correction, not (yet) a bear market.

Yes the media is correct that “Fed rate hikes” won’t cause a bear market, speculators will.

Corrections can lead even the most steely-nerved investors to make emotional knee-jerk reactions that adversely affect long-term returns. In my view, it is smarter to just stay the course and keep focused on the long-term.

When an investor gets caught up in the negative news stories and sells into the downside of a correction, it often means capturing the losses but failing to participate in the recovery, which is a recipe for sub-optimal returns over time. Famed mutual-fund manager Peter Lynch once quipped that “far more money has been lost by investors preparing for corrections, or trying to anticipate corrections than has been lost in corrections themselves.”

We can identify four defining features of a stock market correction, here’s what they would be:

We are seeing all of these features today.

Value vs Growth or Buffet vs Wood 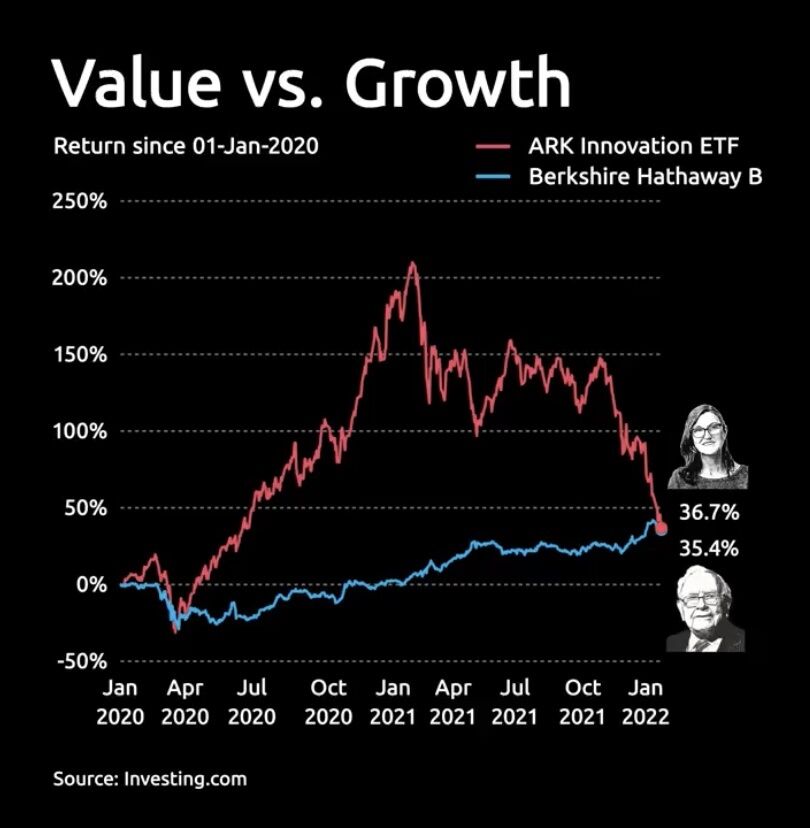 The reasons we think that this is not a bear market are:

Violent sell-offs like the one we have seen recently can be great buying opportunities. It’s tempting to think that the best stocks to buy, when it’s time, are those that have fallen the most. But that’s not right, for two reasons.

First, market corrections often involve a rotation of which stocks lead the market. In the last two years, investors wanted to own growth at almost any cost. So growth stocks performed spectacularly, irrespective of whether those companies were profitable. But in the recent sell-off, unprofitable growth stocks have been hit hardest. It’s unlikely that these stocks will perform best in a market recovery. Market leadership is rotating to other stocks.

The second reason you shouldn’t just buy the most beaten down stocks is that you should plan to hold the stocks you buy for years. Buying stocks for a quick flip is not a successful strategy for most investors. The stocks which have been beaten down the most are not necessarily the ones you want to hold for years.

Several more sectors moved from the  Green Zone into the Yellow Zone this week. But no sector has closed in the Red Zone to date. 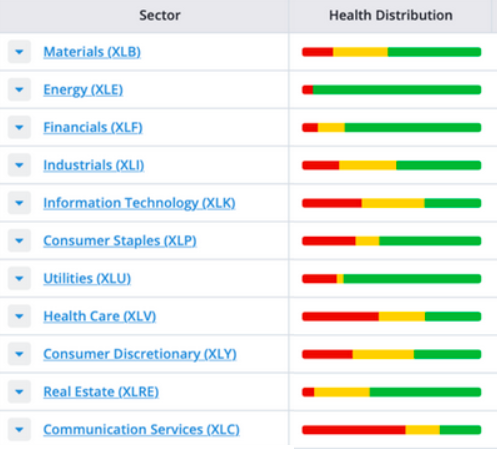 We would favour  energy stocks that should insulate against inflation and benefit from the re-opening. Buy the stocks which unlike the pandemic winners, should benefit from a return to the office and increased corporate spending and stocks with a strong dividend growth track record.

The reality is, both bullish and bearish investors can find compelling evidence to support their views today. But no one knows for sure what’s going to happen next.  For now, that means maintaining a conservatively bullish stance until we see evidence that this correction is over or a bear market is confirmed.

Chairman Powell was very hawkish relative to expectations by not fully denying the possibility of a 50bps rate hike, suggesting the Fed has “significant room” and not confirming the Fed would stop tightening if the yield curve inverted.
You can find the official statements on the Fed’s website HERE. It also has a video and transcript of Jerome Powell’s press conference, which on this occasion was a must-see

After its two-day deliberations this week, the Federal Open Market Committee signaled that it would start a rate-hiking cycle soon (read March), follow that with a gradual reduction in its balance sheet and, by the way, end its asset-purchase program by early March.
The key points, as we view them, are as follows:

This last point may have been the most important. Powell is admitting that the Fed doesn’t know how quickly it can get inflation under control (it’s not alone in this), and is maintaining maximum discretion for the months ahead.
Anyway, we think the FED did a very good communication exercice putting pressure on the markets and speculators without doing anything ad yet it has room to increase rate by 0.5% in one shot. For Powell, and perhaps everyone else, this looks like mission accomplished for now.

Without actually doing anything, the words at the press conference were enough to engineer a noticeable tightening of financial conditions while still leaving stock markets close to their all-time highs. If he could only repeat this trick every FOMC day for the next two or three years, we would have nothing to worry about.

The central bank has also shown that it can live with the amount of equity market turbulence that it’s created so far. The strength of the reaction to Powell’s press conference was driven in large part by the prior speculation that the market selloff would force him into offering a “dovish olive branch” and walk back some hawkish speculation.

That he deliberately and conspicuously refused to rule out any of the options that worry the market showed that the “strike price” of the Fed’s “put option” under the stock market (in other words, the index level at which the Fed would feel compelled to ease up) is lower than traders had thought. 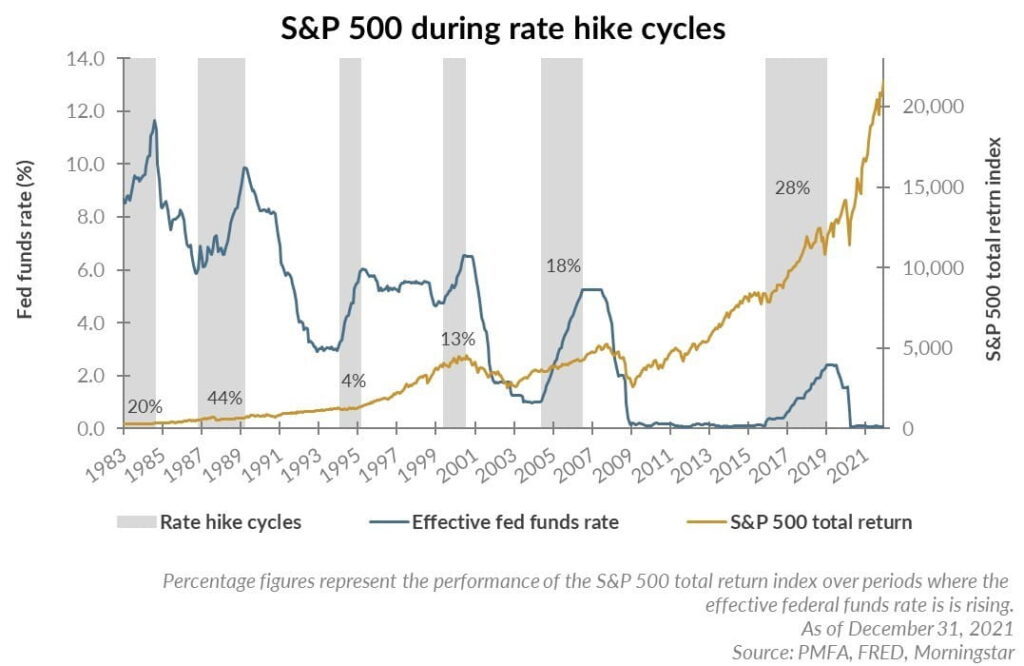 The Fed is bluffing when they suggest asset prices are NOT a threat to financial stability. In truth, the Fed focuses entirely on the markets as they are dependent on “stability” to keep the financial “house of cards” from collapsing. No doubt that sharply higher interest rates would cause big problems, notably for markets but most importantly for the Government with the federal budget deficit going forward.

The ‘stability/instability paradox’ assumes all players are rational and implies avoidance of destruction. In other words, all players will act rationally, and no one will push ‘the big red button.’With the entirety of the financial ecosystem more heavily levered than ever, the “instability of stability” is the most significant risk.

The Fed is highly dependent on this assumption. After more than 12-years of the most unprecedented monetary policy program in U.S. history, they are attempting to navigate.

The difference in both cases is the Fed did not have 7% inflation to deal with. But maybe partly because they have convinced themselves that inflation is currently just ‘paying back’ a long period of being ‘too low’ (whatever that means). For now, expect them to aggressively and triumphantly forecast that “inflation will moderate in the months ahead.
Happy Trades