MARKETSCOPE : Don’t Leave the Party Yet ….

After two weeks of sharp decline cause by the discovery of the new Omicron variant, financial markets have recovered in recent sessions, reassured by reports of milder symptoms and the effectiveness of vaccine boosters. Risk appetite has abruptly resurfaced, allowing some indexes to return close to their November records. 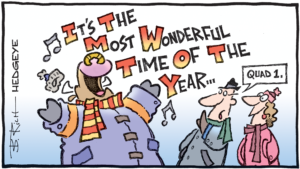 In Europe, despite some declines in recent days, weekly performances remain significant. The SMI gained 1.3%, the Dax 3.0% and the Footsie 2.4%. In the peripheral countries, Italy gained 3%, Spain 1.4% and Portugal 1.3%. Over the last five days, in Asia, the Shanghai Composite has recovered 1.6%, the Nikkei 1.5% and the Hang Seng 1%.

U.S. stocks finished higher on Friday to close out one of the best weeks since February. Investors took in a consumer price index report that showed inflation rose in November by the most since 1982, although just below the feared mark of 7%. For the week, the Dow was up 4%, the S&P 500 Index gained 3.8% and the Nasdaq rose 3.6%.

Panic Selling To Panic Buying In One Week

Notably, while the previous week was marked by panic selling, this week was the exact opposite. Starting on Monday, there was almost a palpable “panic” to buy stocks. It looks like the  indexes the SMI as well as the S&P500 are back to its old habit of bouncing off the 50-day moving average! After a sharp rebound, the market is currently contending with resistance — 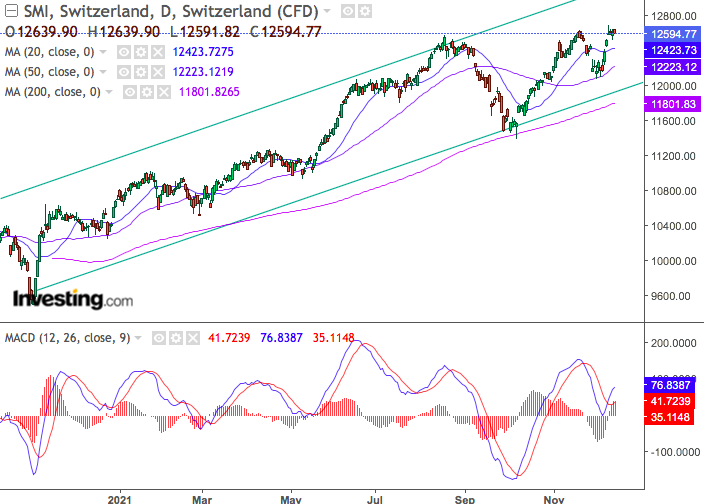 Note that we placed a partial stop loss on the 50 MA levels but we expect a strong support at the 200 MA level which corresponds also to the base line of the uptrend channel.

Did anything fundamentally change to support the panic buying? No. If you paid attention to the headlines, the Federal Reserve has become considerably more “hawkish” in the stance. The acceleration of tapering liquidity and hiking interest rates will prove unkind to investors chasing highly overvalued securities. We believe the rotation is not a sudden change in mindset but, likely the actions of managers rebalancing their portfolios. Frequently at year-end asset managers, especially the funds, sell the winners which have become overweight positions and buy the losers which are below their proper weights. The large returns this year in certain sectors are making these actions more visible than normal.

Notably, while the panic selling alleviated much of the overbought and extended market conditions, risks remain. While speculators continue to pile on the most extreme leverage in stock market history, America’s CEOs and CFOs are taking the timeless advice of the great John Templeton: “When you find that the crowd is overenthusiastically trying to buy, help them and sell. It usually works out. 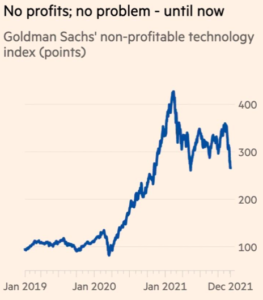 We believe the rotation is not a sudden change in mindset but, likely the actions of managers rebalancing their portfolios. Frequently at year-end asset managers, especially the funds, sell the winners which have become overweight positions and buy the losers which are below their proper weights. The large returns this year in certain sectors are making these actions more visible than normal.

Next week, the Fed meeting could signal faster tightening, not to mention options expiration, which could weigh on sentiment.  With the Federal Reserve set to tighten policy, such removes the support for taking on excess leverage and over-paying for valuations.

Unfortunately, previous rate hiking cycles have all ended badly. Every. Single. One. 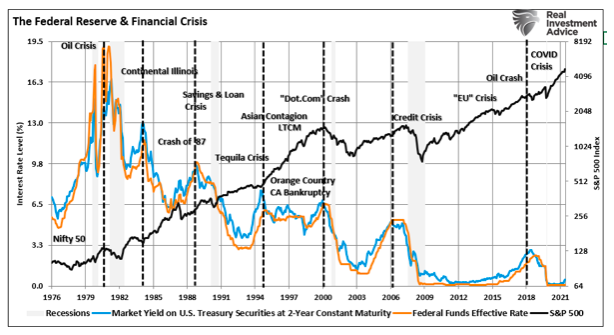 We do hear rumors that Jerome Powell does not want to “lose the stock market.”  He may soon be forced to make a choice between runaway inflation and the stock market, however.  Will this time be different ?

With a triple witching at the end of the week, it suggests that we will see some additional “sloppy” action next week heading into options expiration next Friday. However, that weakness should provide the base for the year-end rally to commence from.

On a longer-term basis, we remain cautious due to valuations, earnings expectations, and weaker economic growth. However, there are reasons to be more optimistic from a trading perspective in the near term.

Heading into 2022, the risk of disappointing economic growth expectations is very high. Unfortunately, such means current earnings growth estimates are also at risk.

But this is a story for next year. See our outlook 2022 in the coming weeks

The market as a whole has suffered a consequent drop of more than 12% in a week, and bitcoin itself cannot boast of better resistance by posting a similar drop at the time of writing. Black Saturday, December 3, saw $2.5 billion worth of liquidations on the bitcoin futures market, which partly explains the episodic fall in the price to around $42,000 on that day, only to fall back to just under $50,000 today. A nervous end to the year in the digital asset market.

On the barbarian relic side (Gold) we believe the end of gold bullion’s consolidation is near (goodbye to Groundhog Day $1,800  at last?). Since gold’s August 2020 peak (see Figure 1), the metal has been consolidating the breakout from the multi-year base pattern highlighted with the dotted blue lines. Though the past year has seen many price swoons and exhausting trading, gold was never in danger, technically, of breaking its secular bullish pattern. As we wind down 2021, we see several elevated markers of macro risk that the market will not likely be able to ignore for much longer — risks that we believe to be in the regime-changing category. 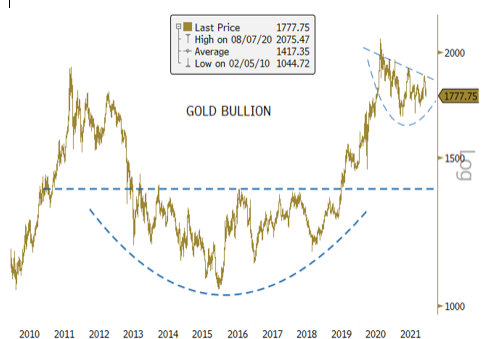 In China EVERGRANDE got downgraded by Fitch the first to label China Evergrande’s overseas bonds as “in default” after the heavily-indebted property developer missed coupon payments totaling $82.5M when a grace period expired on Monday. “There has been no announcement from the company or the trustee.
The downgrade by Fitch could trigger cross defaults on the developer’s $19.2B of outstanding debt across international bond markets. It also raises concerns for what it will mean domestically for China’s $5T property sector and the potential impact on the nation’s economy. In response, China’s central bank has freed up 1.2T yuan ($188B) of liquidity for the banking system – by cutting the reserve requirement ratio by 50 bps – and pledged to maintain “flexible” monetary policy in the coming year.