MARKETSCOPE : All I Want for Christmas is … ! 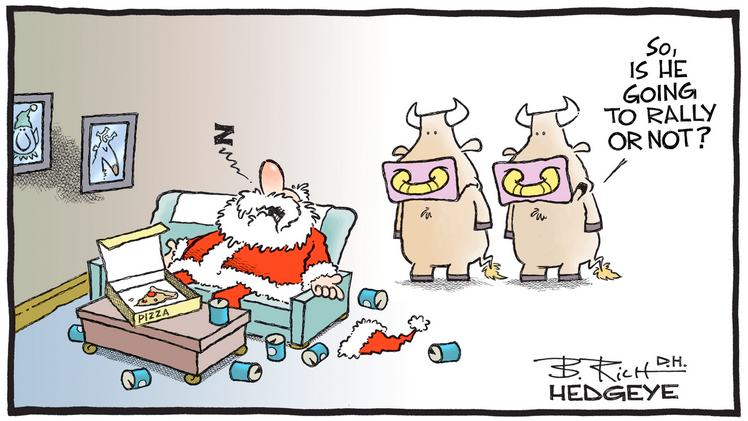 Stocks wrapped up their worst week since September, as recession fears resurfaced after a hotter than expected report on wholesale price inflation, as some surprisingly strong economic data (ISM services, Michigan Consumer Sentiment, PPI) ahead of next week’s Federal Reserve policy meeting, dampened hopes that the Fed might soon be able to curb its program of raising interest rates to cool inflation. 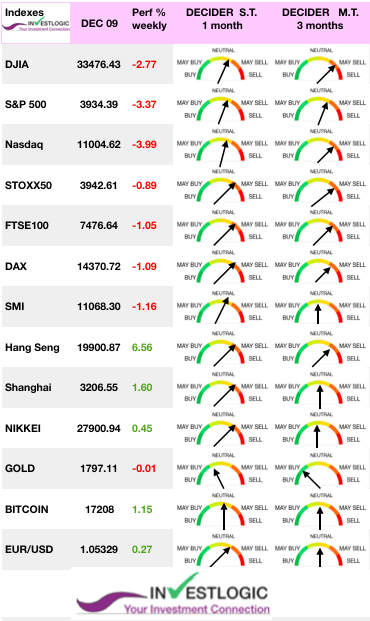 The S&P 500 Index recorded its worst return in five weeks and was unable to stay above its 200-day moving average following the recent rally. Within the S&P 500, defensive sectors (health care, consumer staples, and utilities) fared best. Energy shares fell sharply as oil prices tumbled to their lowest level since January. The yield on the 10-year U.S. Treasury note touched a nearly three-month intraday low on Wednesday but edged higher to end the week.

In Europe, stocks (STOXX 600 Index) fell -1%  on renewed fears of a recession as central banks tighten monetary policy in an effort to quell inflation. Revised data showed that the eurozone economy expanded 0.3% sequentially in Q3 —up from a first estimate of 0.2%—boosted by increases in household spending and business investment.

Chinese stock markets rose as Beijing’s rapid easing of coronavirus pandemic restrictions bolstered investor sentiment. China seems to have finally made a 180-degree turn to revive the country’s flagging economy. The authorities are burying the zero-covid policy and supporting the real estate sector.

As we shall discuss below, the inflation scenario seems to be gradually giving way to a recession scenario as we enter 2023. Next week should therefore be decisive, with the Fed and ECB decisions on rates. The November CPI report and Federal Reserve meeting having the potential to set the tone for the remaining three weeks of the year. While a mild CPI print is not anticipated to jolt the Fed away from its hawkish stance, a flat reading or surprise to the upside could reset expectations for investors out in front of their skis for betting on an inflation peak.

Financial markets agree on the near-term vision, but see a rapid retreat from peak rates later next year. That clash could be because investors expect price pressures to ease faster than the Fed, which worries inflation will prove sticky after getting burned by a bad call it would be transitory. It could also reflect bets that rising unemployment will become a more weighty Fed concern.

Average rate between peak rate and first cut is 11 months 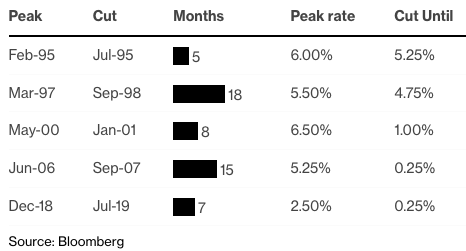 Some Federal Reserve officials have signaled plans to raise their benchmark interest rate by 0.5 percentage point at their meeting next week. However, elevated wage pressures could lead them to continue lifting it to higher levels than investors expect.

Thus, after reaching those temporary heights market is now reminding everybody to prepare for bottom somewhere between 3,000 to 3,300 by April 2023.

This outlook is not a surprise to our subscribers and followers as we have been beating the drum -See comment below- about this being a long term bear market where we have not yet seen bottom. And not to be suckered in by any of these seemingly impressive bear market rallies as they are all just mirages.

This explains why as wealth managers, we adhere to a multi-year investment horizon, and we know that we add value for our clients by making fewer mistakes than the average. We are still promoting  a low exposure to markets with a high level of cash to profit as the serpentine pattern of this market eventually winds lower.

Not surprisingly, that hawkish language took the “wind out of the bull’s sails,” sending the market back below the 200-DMA. The market held support at the 100-DMA but broke the 3950 support level, which triggered selling late friday afternoon.

That selling pushed the MACD “sell” signal lower, suggesting the market may struggle between now and next week’s FOMC meeting. Furthermore, due to wage growth, there is a risk of a hotter-than-expected CPI report on Tuesday. 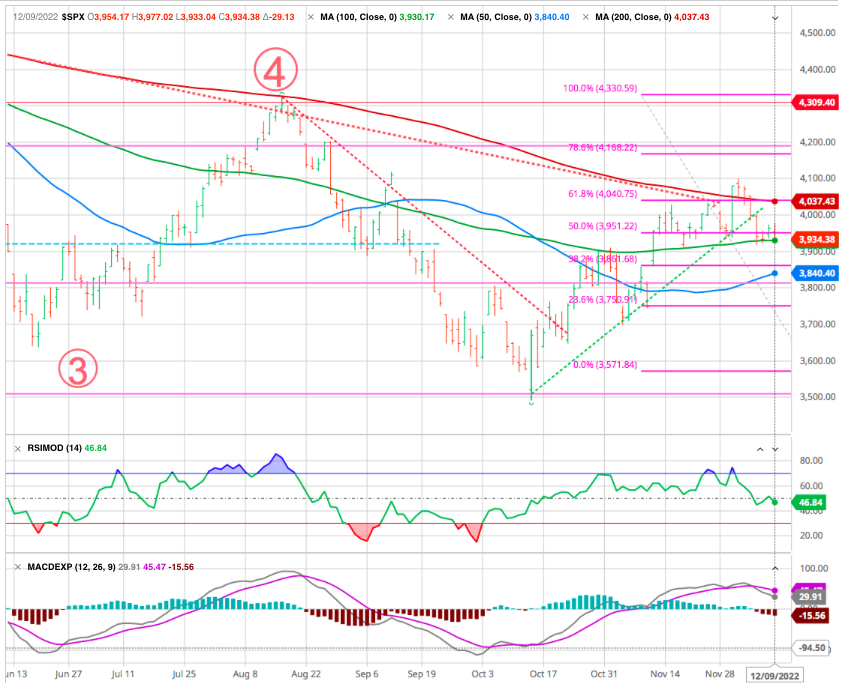 It appears that it is even more doubtius regarding the Nasdaq with its high tech overexposure. 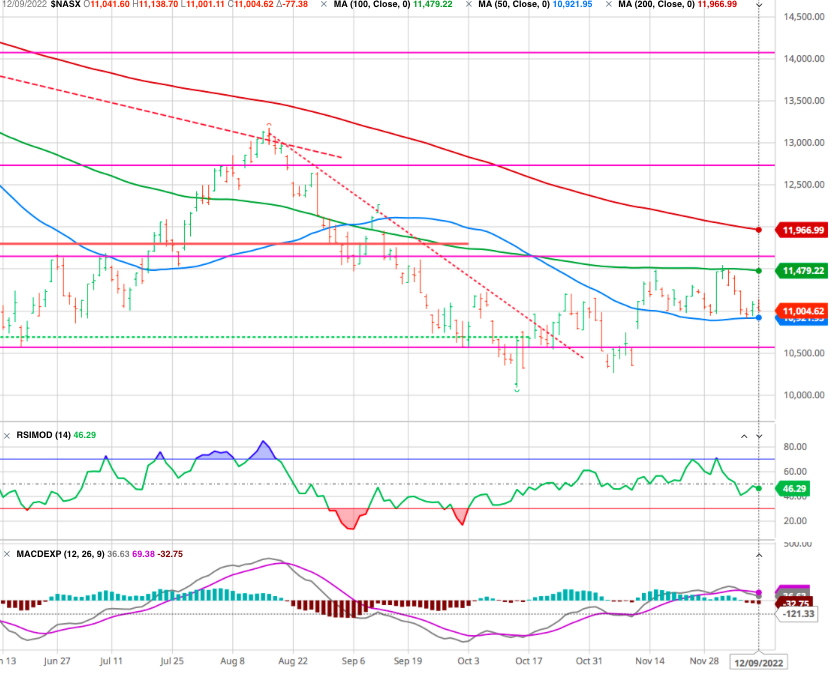 We remain risk-averse until we get a better opportunity to increase equity risk.

2023 A Question of Earnings

Of course, as we approach the end of the year, all eyes turn to 2023 with optimistic hopes of a better year than the last. Such is where estimating market targets becomes an annual Wall Street event.

As noted, the current earnings estimates for 2023 remain well above the long-term historical 6% peak-to-peak earnings trend throughout history. It is exceedingly difficult not to expect a sharp reversion in earnings in a “recessionary” outcome, but for the purpose of this exercise, we will remain focused on valuation differentials. 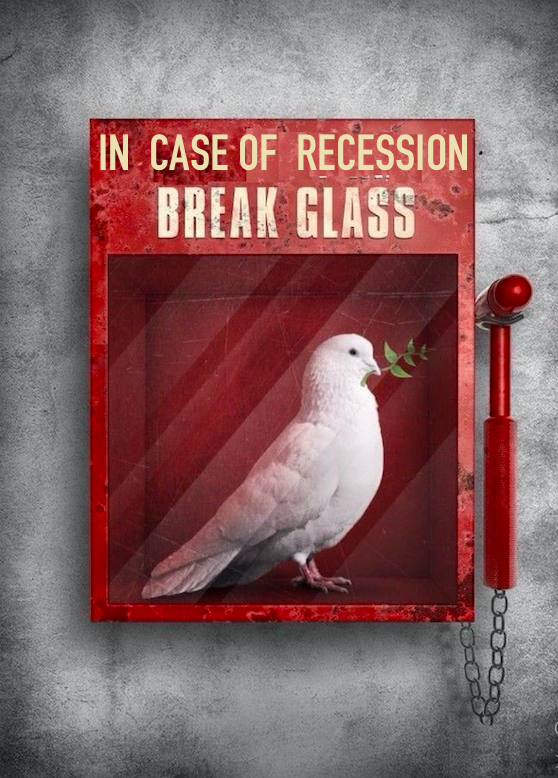 Valuations are still relatively high, and we should continue seeing multiple compression as earnings and sentiment decline in the coming months, as shown in the Schiller P/E index 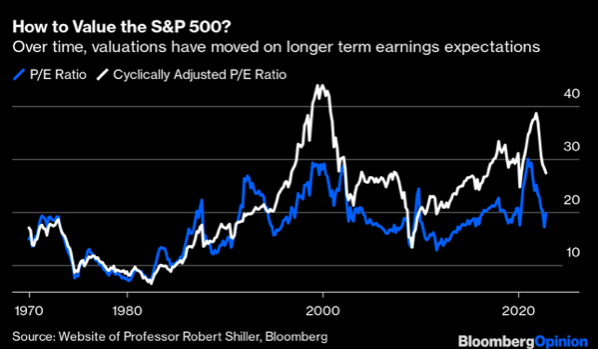 This index compares the current stock price to prior decade average earnings adjusted for inflation, and “fair value” is derived from the average with wide divergences pointing to under or over valuation.

The CAPE, designed to capture how the market is dealing with longer-term trends, is comfortably the more variable of the two.
Considering that many companies are going through earnings declines, we should see the downtrend in the CAPE ratio continue in the mid-term. It’s not likely that the CAPE will return to its historical mean at around 17, but we could see the CAPE come down to 23 or possibly even the 20 level.

With that when the economy slip into a recession and valuations revert to the longer-term median of 15x earnings, such would imply a level of 3100.

Pessimistically, a recession will pull the market below the 2019 peak and revert valuations to 15x earnings.

Can Stocks Bottom Without Fed Pivot?

In our view, the risk seem tilted toward weaker economic outcomes, given the Fed’s ongoing monetary tightening. However, as we have stated previously, the Fed will reverse course when something eventually breaks.

Notably, most “bear markets” occur AFTER the Fed’s “policy pivot.” 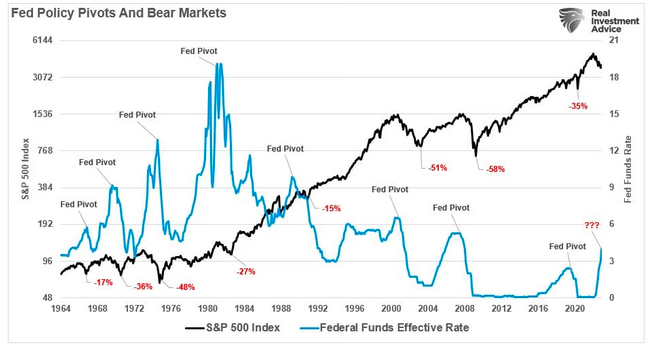 The reason is that the policy pivot comes with the recognition that something has broken either economically (aka “recession”) or financially (aka “credit event”).

When that event occurs, and the Fed initially takes action, the market reprices for lower economic and earnings growth rates.
Such is why we continue to remain cautious for now.
Time to be bullish again will come. However, it is most often best recognized after the bottom gets made.

The final stages of a bear market have historically proven to be the most severe, so risk management should remain a priority for investors. The ultimate appearance of a new bull market will present a new slate of market leaders that will offer tremendous opportunities for profit. 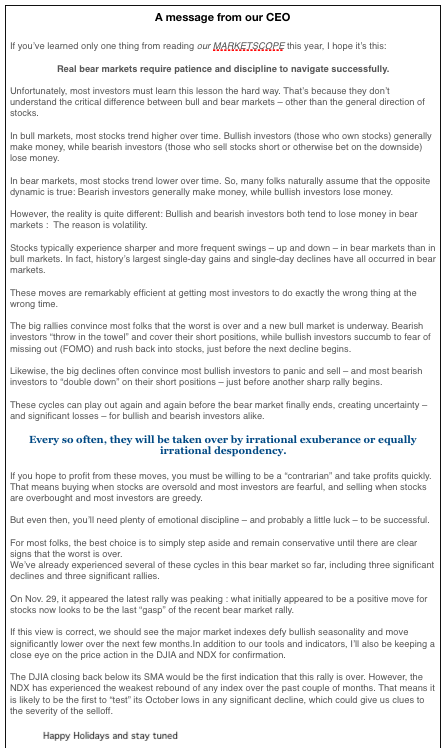 The Fed May Hand The Market A Huge Surprise This Week 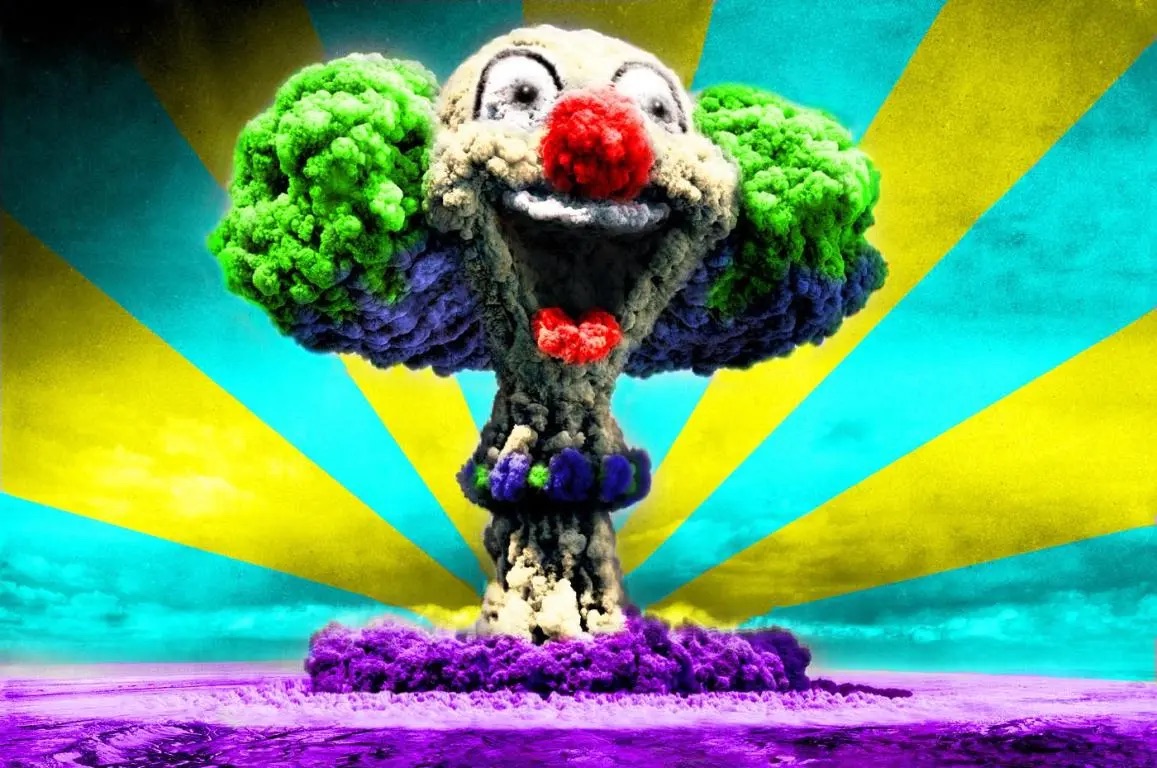 The FOMC meeting on Wednesday, December 14, will be a meaningful event as it will end the expeditious process of raising rates to catch up with inflation and shift to the next phase, focusing on how high and for how long.

Listening to Fed officials since the November FOMC meeting, it is clear that the Fed’s projected path of rate hikes will be higher than where they stood at the September FOMC meeting. At that point, the Fed saw the peak terminal rate at 4.6%. Rates are likely heading much higher than what the market has priced in for 2023.

With the Federal Reserve committed to continued rate hikes in 2023, reducing market liquidity through Quantitative Tightening, and the consumer struggling to make ends meet, the risk of a recession seems quite elevated.

A recession seems highly probable if the Fed’s end game is higher unemployment and lower inflation through higher interest rates, which will ultimately slow wage growth. The economic data already seems well tilted into a recessionary trend. However, the problem is that the market doesn’t believe the Fed and currently sees rates at just 4.6% by December 2023, hence the composite economic index declines further during a recession, suggesting a deeper reversion in the stock market.