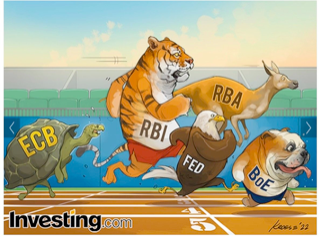 Strong rebound for the US and European markets at the beginning of earnings season, despite an unfavorable macroeconomic context. Despite the pullback at the end of the week, the S&P 500 Index and Dow Jones Industrial Average posted their biggest weekly gain in a month, while the Nasdaq notched its largest advance since July 8. In the bond pits, the 10-year Treasury yield ended the week at 2.75%

At the end of this week, we feel that caution is still the order of the day, given the outperformance of defensive stocks.  Fears of a potential recession are still weighing on markets and next week will be decisive for the US.

Quality and growth stocks did particularly well this week. Consumer discretionary was the best performing  sector over the week helped by rebounds in Amazon.com and Tesla. It was also a busy week in terms of Q2 earnings reports; many companies are showing greater resilience in profitability and outlooks than expected.

Is this just another technical rebound in a bear market? For now, all scenarios are possible. We’ll be paying close attention to next week’s earnings reports, as some well-known names will unveil their results.

The ECB raised interest rates by 50 basis points. This larger-than-expected adjustment was combined with the announcement of a new bond-buying tool called the Transmission Protection Instrument (TPI), which was introduced as a measure against the surge in “Periphery” spreads. Core eurozone bond yields fell due to concerns about the economy.-See below-.

People are negative. Really, really negative. Now, the question is whether that could conceivably be a good thing. We do not think we are there yet, it is not time yet to invest heavily. We are well past the point of no return. Remember that a recession is most likely already here.
Add to that the next rate hike coming, then it only spells more damage to the economy…lower corporate earnings…lower share prices.

It is true for the Swiss Stock Market, after a somewaht expected correction to fill the previous gap (11250), the main trend should prevail. 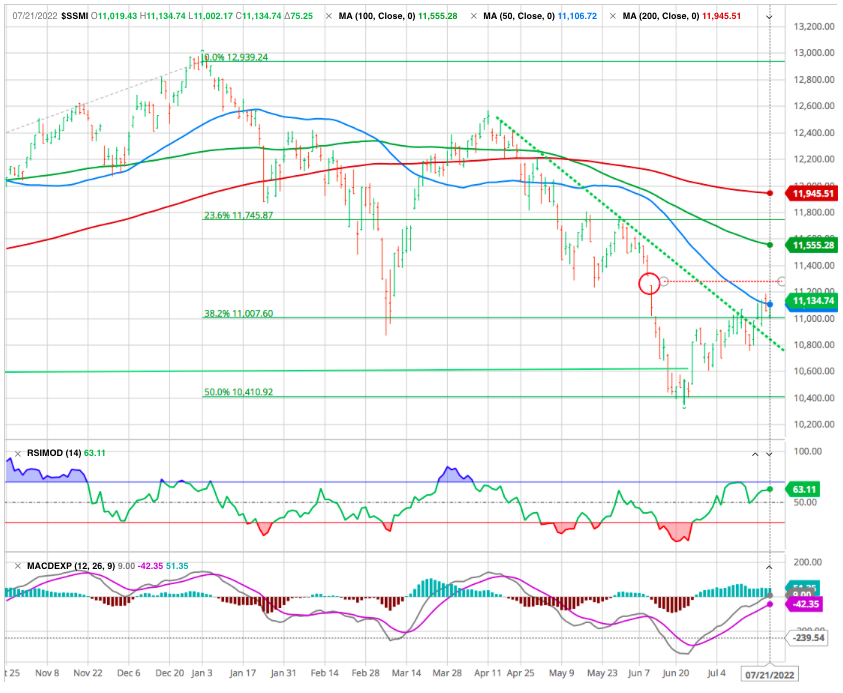 Despite the ECB raising its key interest rates by 50 basis points, the EUR/USD is stabilizing at 1.020. With the start of a tighter monetary policy, the uncertainty surrounding the single currency should fade somewhat. This will help, if only in the short term, to keep the euro above the parity threshold. The ECB’s dramatic intervention should have buoyed the euro. And yet it didn’t really happen: 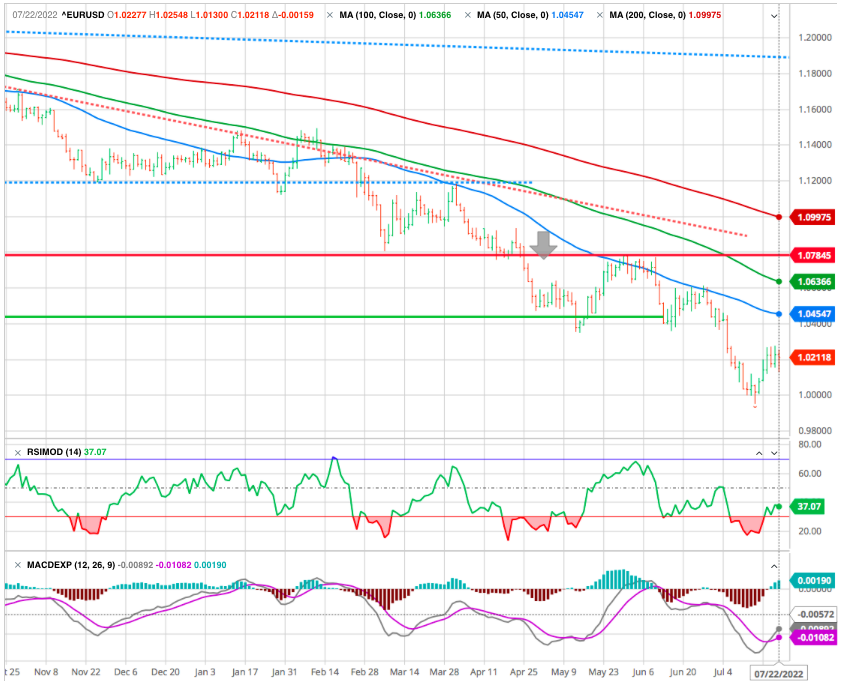 Unlike the U.S., which makes up one large jurisdiction, the ECB’s decision today will reverberate through 27 different member states and their economies. That could expose more indebted countries like Italy to financial trouble and weigh on peripheral bond yields as a whole.

Precious metals were battered earlier this week, hurt by the strengthening US dollar and bond yields, much to the dismay of the barbarian relic. The ounce of gold momentarily fell below the USD 1700 mark. We  note a reversal. 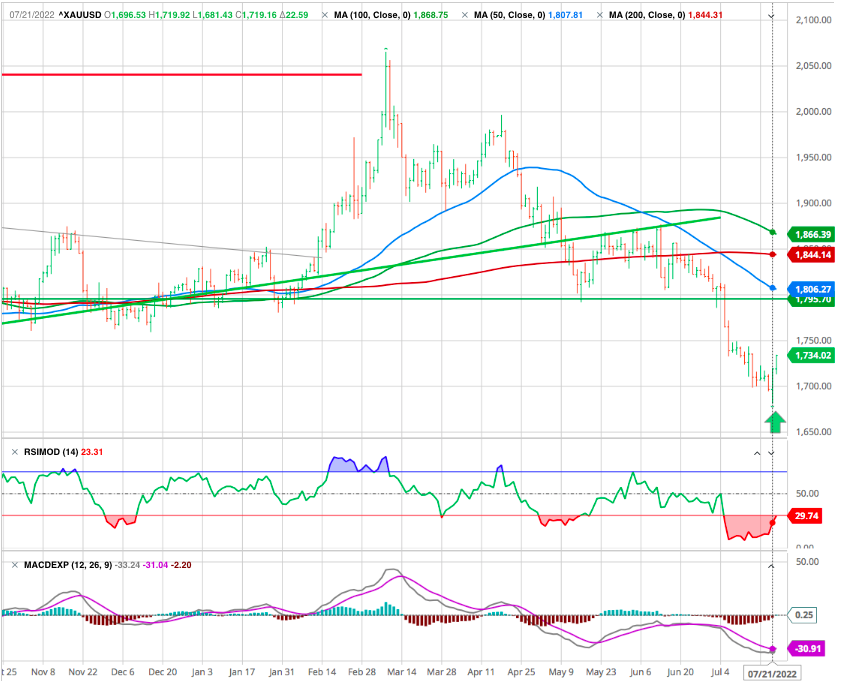 For its part, the crypto-currency market has had an explosive week with bitcoin recovering more than 15% since Monday.

Digital assets have, in addition, against all odds, held up well after Elon Musk announced that he had sold, in the second quarter of 2022, 75% of the bitcoins held by Tesla “to strengthen its holdings in fiat currency.”
For the first time in 5 weeks, the total market capitalization for crypto assets climbed back above $1 trillion (on Monday). This recovery comes as investor expectations of Ethereum’s merger continue to build, but many traders remain very skeptical.

Crypto’s best story for the second half of 2022 may very well hinge on the success of Ethereum’s software transition. Ether (ETH-USD) — trading at $1,481 per coin — has seen a 30% rise over the last week thanks to growing optimism around its transition.

The European Central Bank has decided to raise interest rates for the first time in eleven years (2011).  The central bank is taking a step towards normalizing its monetary policy.  Its last rate hikes triggered a sovereign debt crisis in Italy. Coincidentally or not, former ECB President Mario Draghi chose the same day to end his term as Prime Minister of Italy, causing sharp drops in Italian bonds and stocks.

Overall, this ECB meeting is more hawkish than expected and was not an easy option for Mrs Lagarde as the eurozone is facing two additionnal risks on top of record high inflation: recession and periphery stress as Italy spreads vs. bund keep widening.

Seeking to limit the spreads between yields across the eurozone, the ECB is also poised to unveil a new stimulus plan during today’s meeting. Investors will be paying close attention to the details of the new bond-purchase program, including what assets policymakers are considering buying and under what circumstances.

While ECB President Christine Lagarde is likely to stress the temporary nature of the instrument – owing to the exceptional circumstances the euro area finds itself in – she will also underline the ECB’s determination to secure the integrity of the monetary union, thereby trying to evoke a ‘whatever it takes’ spirit. She  underlined: “The ECB is capable of going big on that.”

“Transmission Protection Instrument,” will allow the bank to make sure its monetary policy works by buying bonds of countries whose yields are rising far out of line with others.  The press release outlining the instrument, which you can read here, goes so far as to say that purchases of private sector securities “could be considered, if appropriate.”

Under the TPI, the central bank can buy securities “to counter unwarranted, disorderly market dynamics that pose a serious threat to the transmission of monetary policy.” It gives a series of conditions, but no numbers. Any financial interventions will be wholly at the discretion of Lagarde and her colleagues. This means that “unwarranted” and “disorderly” could become the new “transitory.”