MARKETSCOPE : Pivot or not Pivot

“Silliness is not dead yet.” 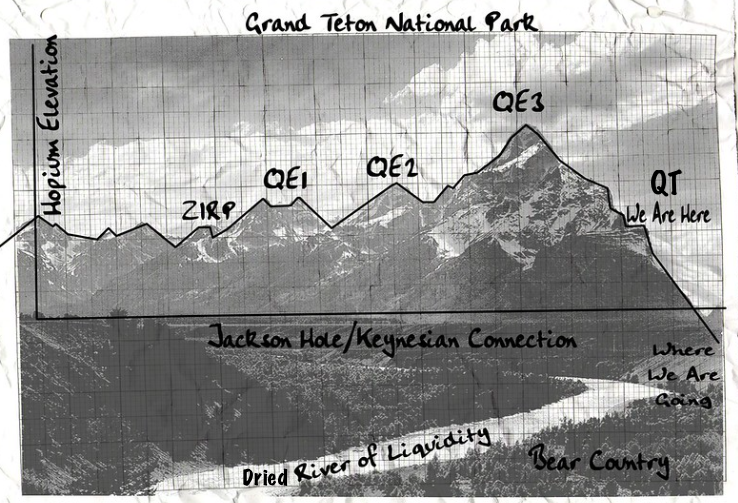 This end of summer smells like the end of a bullish rebound on the markets after almost two months of bear market rally. The culmination of a VIX expiration, Fed minutes, and monthly options expiration helped break the equity market down on Friday and potentially ended the summer rally.

After a rather successful earnings season despite the fears, poor macroeconomic indicators for the end of the year have somewhat revived fears of recession, leading to some legitimate profit taking after this flourishing summer period.

Shares in Europe pulled back as Eurozone inflation hit a record 8.9% in July while German PPI rose 37.2% from a year earlier, Germany’s hotter than expected reading on producer prices renewed inflation concerns over the old continent.

The Jackson Hole conference at the end of the month and Fed Chair Powell’s speech Friday could once again be an adjustment variable to add to market’s forecasts.

MARKETS : Let’s Not Get Carried Away

Legendary hedge fund manager Michael Burry has once again tweeted a warning about a potential stock market decline. Burry, most known for his bet against subprime mortgages, which was made into the film “The Big Short,” warned that rising consumer debt is a significant risk to the U.S. economy.  Michael Burry sold off its long positions on 11 comps during Q2, including bullish bets on Alphabet, Meta, Bristol-Meyers Squibb & Nexstar 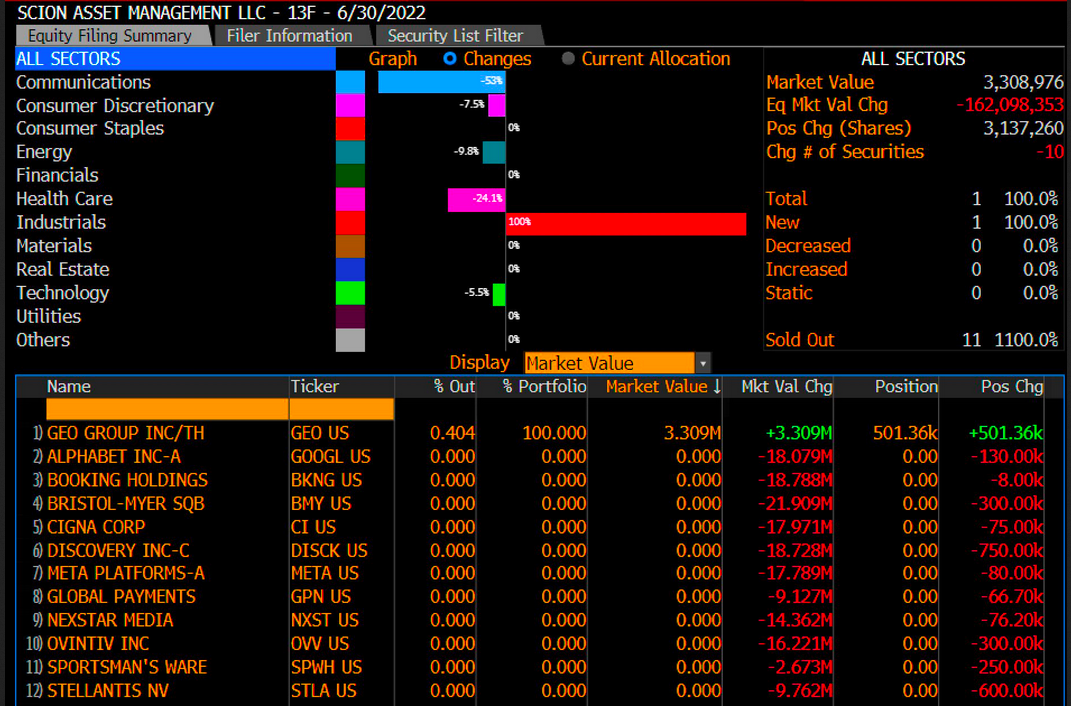 For investors, the market is now back to highly overbought conditions. As shown below, the market is not only testing resistance at the 200-dma but is also well deviated above the 50-dma with the Relative Strength Index (RSI) back to more extreme overbought levels. The sell-off on Friday was expected, but we will have to wait and see if it is a one-day dip or a more sizeable retracement as we are closed to the 50% retracement level at 4243.  We suspect we may see the latter with the MACD close to a sell signal. 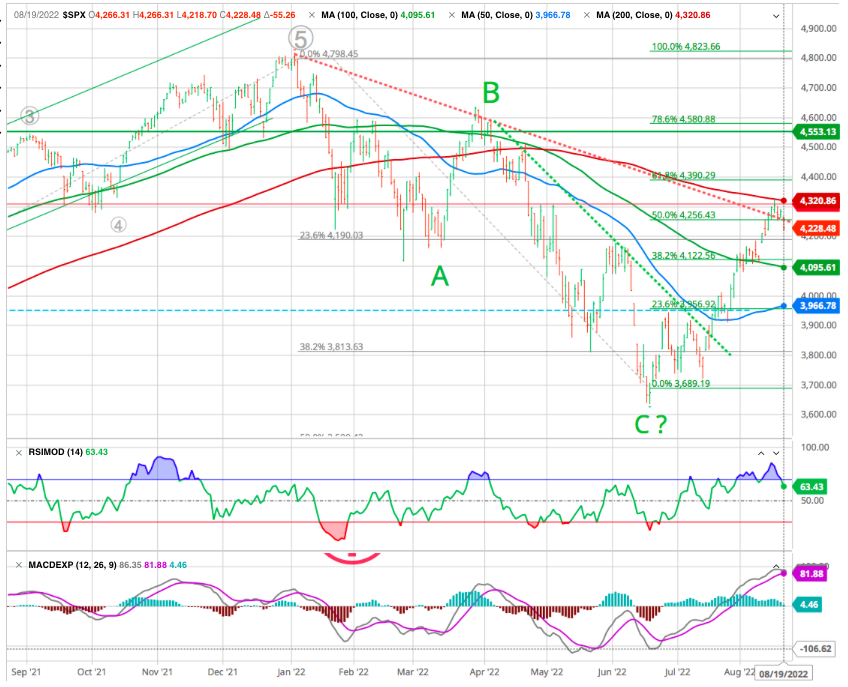 The most logical retracement rallies are at the 100-dma (green line) and the 38.2% retracement level, coinciding with previous support levels. A break below that, and we will retest lows.

Therefore, we will probably see the SPX and stocks, in general, post further declines in the fall, bringing the stock market down to a W-shaped bottom or possibly to new lows before the “ultimate” bear market bottom materializes around 2,800-3,400 in the S&P 500.

As noted above, an important indicator is a 50% decline retracement. When stocks have historically accomplished such a reversal, markets performed better over the next 12 months. Many have suggested a 50% retracement of peak to trough declines always marked the end of a bear market.

“Since WWII, every time the S&P recovered 50% of the bear market price decline, while the 500 may have re-tested the prior low, it never set a lower low,” Sam Stovall, Chief Investment Strategist at CFRA Research

That is not true.

A top would then likely be confirmed by a move back below the market’s July peak near the 4,000 level.

On the other hand, if the index moves decisively above the 4,500 area, it would significantly weaken the bearish case for stocks.  However, we still believe this is a low-probability outcome for several important reasons.

First, we still haven’t seen any of the clear signs that have marked the natural end of bear markets in the past.

Second, we are also not seeing any indication that the Federal Reserve is ready to act in support of higher stock prices again.

As shown below, that is true, except for an essential points. The only bear market low in history that occurred in the midst of a Fed tightening cycle was in 1987, at an S&P 500 forward operating P/E of less than 10, and a price/revenue multiple less than a quarter of today’s level. 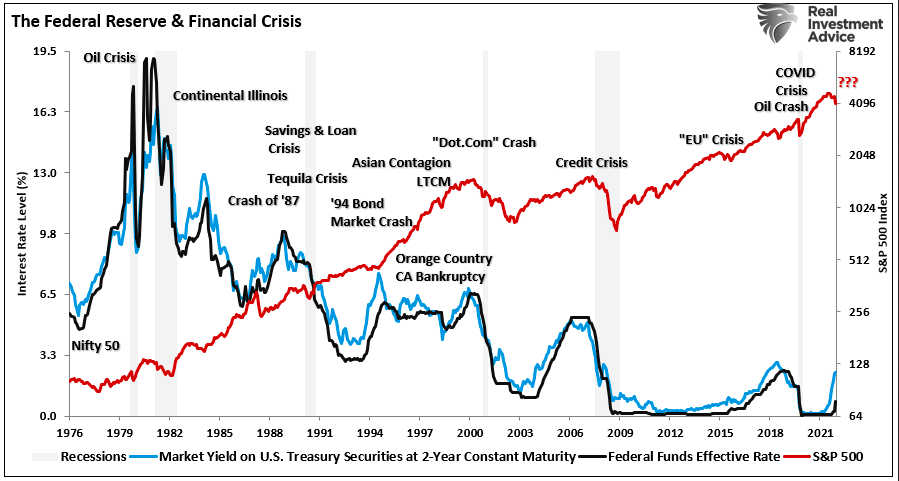 Now, you could argue that the 1987 crash was an outlier. Unlike the other examples I mentioned, this decline didn’t coincide with weakness in the real economy. And the market recovered relatively quickly soon after.

Still, even with this exception, it should be clear that the size of the recent rebound in the SPX does not necessarily mean that this bear market is over.

Wall Street appears convinced that the half-point retreat from the highest core inflation in 40 years, currently at 5.9%, will encourage the Fed to “pivot” to lower rates in no time. Yet when the Federal Funds rate has been lower than core inflation, with core inflation above even 2.5%, the Fed has never shifted to easing unless recession has pushed the unemployment rate toward 6% or higher.

As the Fed noted: “Once the policy rate had reached a sufficiently restrictive level, it likely would be appropriate to maintain that level for some time to ensure that inflation was firmly on a path back to 2%”.

Nowhere in that statement is a notion of cut rates anytime soon, which belies those jumping into stocks hoping for a “pivot.” While the FOMC minutes discussed the need to hike rates further as inflation remains “unacceptably high,” they also suggested moderation as the lag effect of rate hikes becomes apparent. Such was evident in their “dovish” statement that many officials saw a risk of over-tightening because of constant changes in the economic environment and the lag in the effect of monetary policy. In other words, that is the risk of a “policy error”.

Gold has fallen for five consecutive sessions and is now trading around USD 1,750 per ounce.

While bitcoin had, since the beginning of July, begun its ascent into positive territory, letting crypto-investors regain some optimism about a potential sustainable bullish recovery on the digital currency, the fall was brutal this week. After trading around $25,000 on Monday, BTC is now hovering just above $21,000, 15% lower, this Friday. This end of August is therefore shaping up to be tumultuous and full of doubts in the cryptosphere.

Up 0.6% Friday, the DXY index is now only 1% off the two-decade strength recorded a few weeks ago—that as the yield on 10-year government bonds flirts again with 3%. Bottom line: A reversal in some of the recent easing of financial conditions. 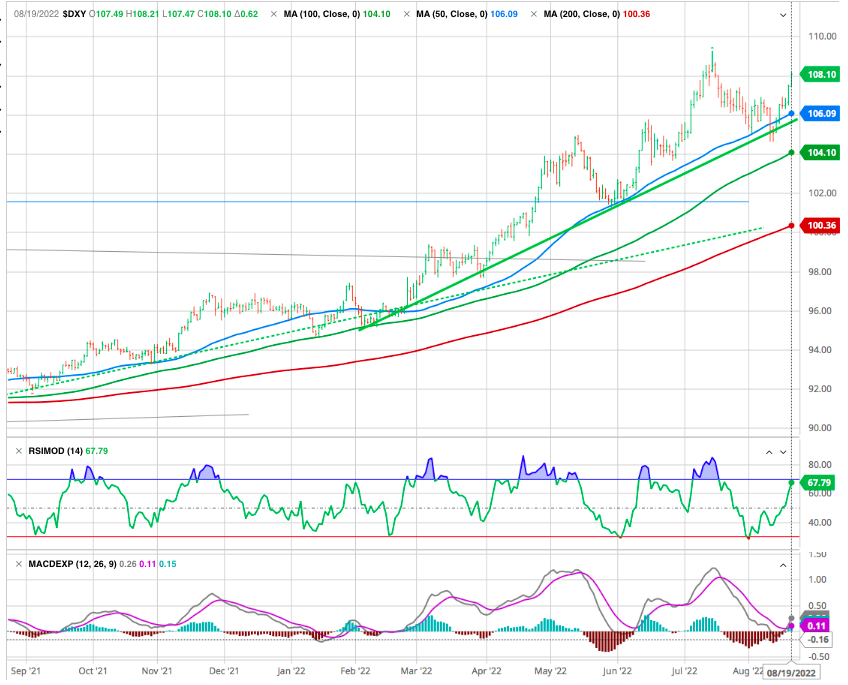 Jackson Hole will have answers 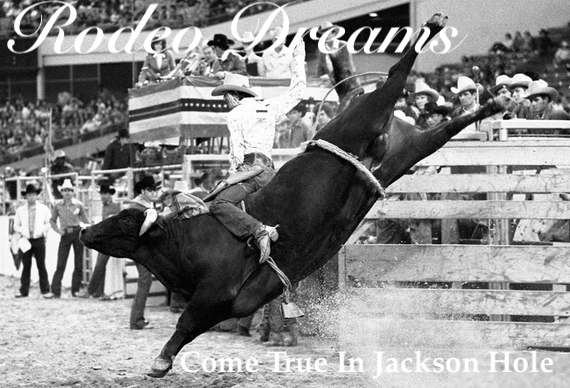 The FED taming the bulls

The focus of the markets next week will be on Jackson Hole and the tone from Federal Reserve members at their annual symposium. The Fed meets at a time when some analysts are warning that frenzied trading in meme stocks and overconfidence in inflation being tamed could be a signal that investors are in front of their skies.

The annual retreat by central bankers to the Tetons is getting more attention than normal with U.S. equities appearing to be factoring in a tamer fight against inflation than FOMC speakers have tipped off in their speeches and dot plots.

Fed Chairman Jerome Powell is expected to dig in a bit and establish his hawkish credentials. The tone from Powell could shift investor sentiment if he reiterates that the risks of inflation are more significant than the risk of a hard landing for the U.S. economy. The Fed is still anticipated to raise the target range for the federal funds rate by 50 or 75 points in September and follow with 25 or 50 points hikes in November and December. 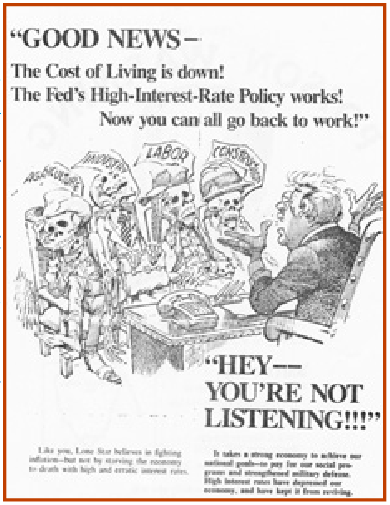 The Fed has implied it will need to see inflation move steadily lower for at least a few months before it stops raising rates. So, while the small slowdown in headline inflation last month (8.5% in July versus 9.1% in June) was a positive first step, it isn’t enough to justify an end to rate hikes on its own.

If the Fed were to stop hiking now, it would risk further damaging its already-fragile credibility, especially with midterm elections approaching this fall.

But more importantly, even if the Federal Reserve does stop hiking rates soon, that doesn’t mean it will immediately start cutting them right away. Barring a crisis, it has typically kept rates steady for several months or even years following hiking cycles in the past.

Meanwhile, the Fed’s quantitative tightening (QT) program is scheduled to continue removing tens of billions of dollars of liquidity from the markets every month for the next year or two at least.

A presentation by economist Edward J. Kane at the 1983 symposium reproduced advertisements that criticized Fed policies.

Why does this matter?

Because history suggests that nothing short of a complete reversal of monetary policy – from aggressively tightening to aggressively easing again – will be sufficient to cut this bear market short.

Unfortunately, the Fed currently has no plans to reverse its policy any time soon. And we aren’t yet seeing any signs of an impending crisis that would prompt it to reconsider.

To be clear, we still believe a crisis is likely – history suggests the Fed has already hiked more than our highly financialized economy can tolerate. But it’s not here yet, and with inflation still well above its official 2% target, the Fed is unlikely to pivot unless it is forced to do so.

The Fed tightening the monetary screws during this vulnerable period isn’t exactly a bullish recipe for asset price appreciation.

The end of August is near. Summer is almost over. Enjoy what’s left (and be really careful with your portfolio). 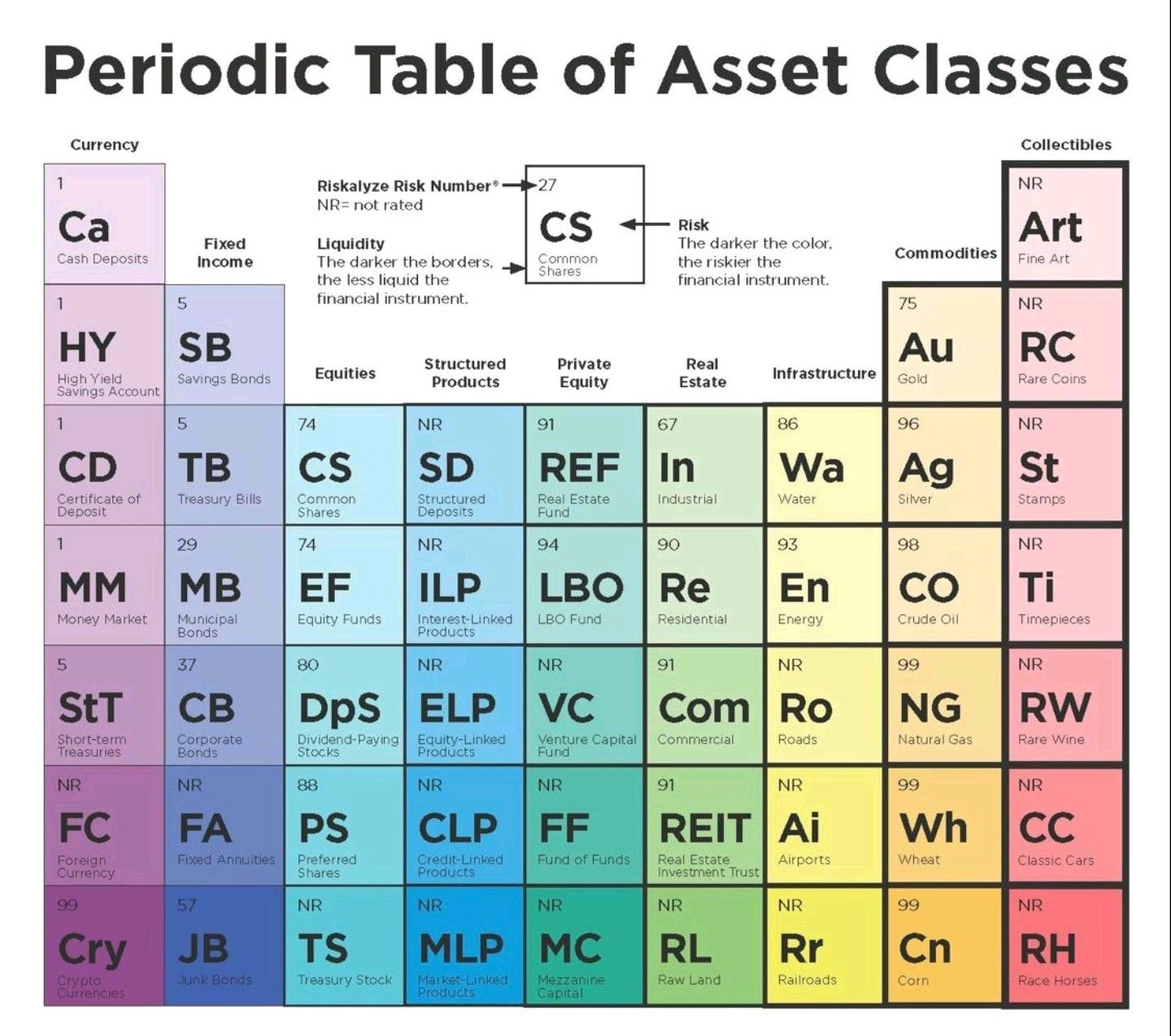