MARKETSCOPE : A Year to Forget !

Hey Trader … Have You Been Good for Santa ?

The long-awaited Christmas rally lost steam at the end of the week. Despite the new slowdown in inflation in the United States last Wednesday, he data showed that headline inflation rose only 0.1% in November from October, a tick lower than consensus, risk aversion suddenly resurfaced at the end of the week, following the much more hawkish comments of the Fed and the ECB, leading to fears that monetary tightening will continue for a prolonged period and that the economy will enter a recession. 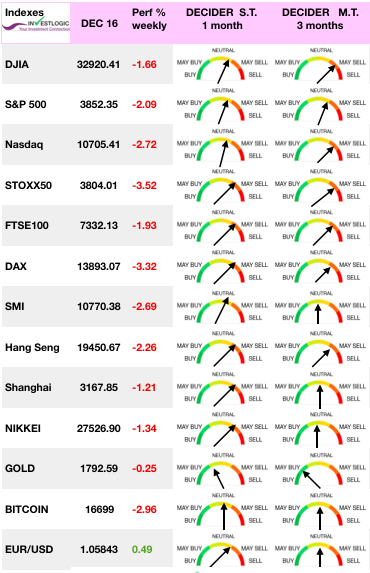 The major indexes posted a second consecutive week of losses amid renewed fears of the economy sinking into a recession next year as major central banks may not ease up on rate hikes just yet.

Trading was especially volatile on Friday with $2.6T worth of options expiring as part of triple witching day.

The week featured the Federal Reserve, European Central Bank and Bank of England all turn more hawkish as inflation remains stubbornly high. As widely expected, the Federal Open Market Committee increased its policy rate by 50 basis points to 4.25%-4.50% on Wednesday. Of note, San Francisco Fed President Mary Daly said the Fed still has a “long way to go” to get inflation down to 2%.

While even rates are no longer expected to rise at the same rate, they will still rise as the primary mission of central banks is to ensure price stability. As we will discuss next, Jerome Powell was indeed more hawkish than expected, signaling further rate increases and making clear that no “pivot” was coming.

MARKETS : A Year to Forget 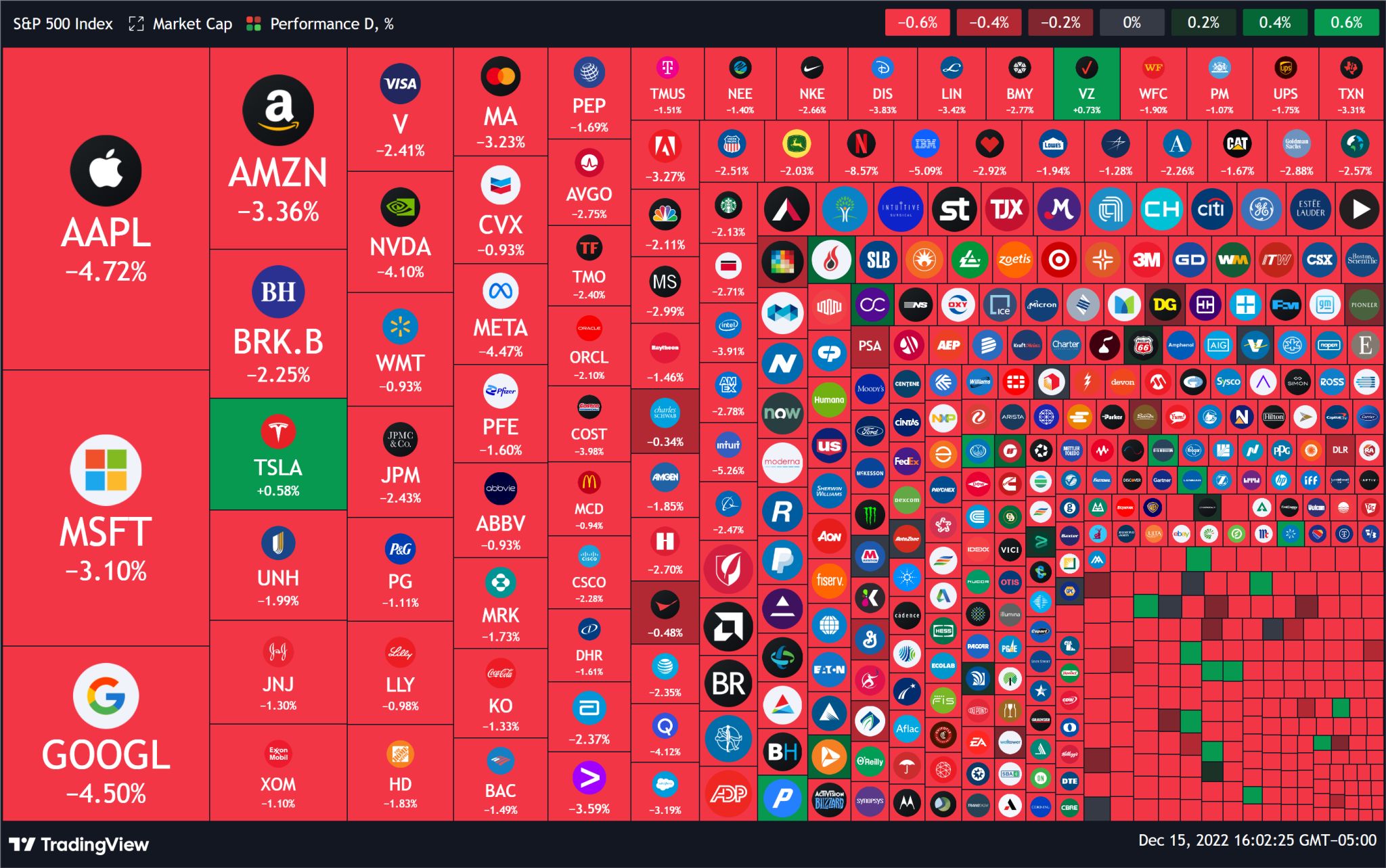 First glance, this looks short-term bearish. That downtrend dotted red line has basically been confirmed, and that horizontal blue support line has been breached. With the Fed showing no signs of slowing down (and yet the economy showing many signs of slowing down), we could easily see a revisiting of the lows at the previous 50% fibo correction and most probably to 61.8% (3200). 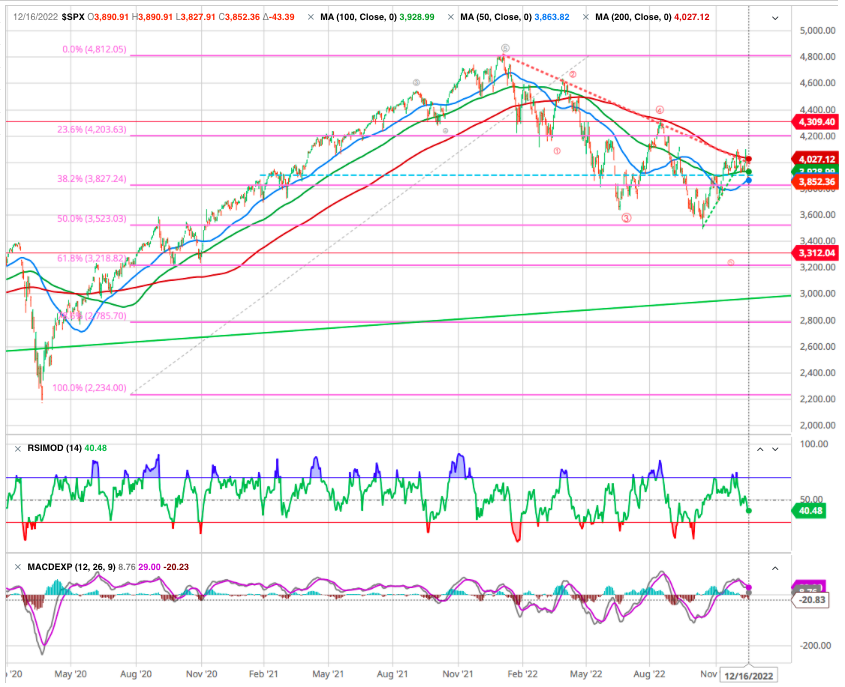 The daily 200 dma on the S&P 500 is holding strong as resistance. It is now a waiting game to see if we get weakness back to the October low or a bear trap before the bulls kick in.

The MACD sell signal remains a good signal NOT to get sucked into rally attempts. Remaining cautious has served readers well over the last several weeks. If occuring, that  rally may be somewhat limited, given the downside break of the recent consolidation range, which will provide overhead resistance.

Situation is getting even more unstable on the Nasdaq. The primary trend is still down. 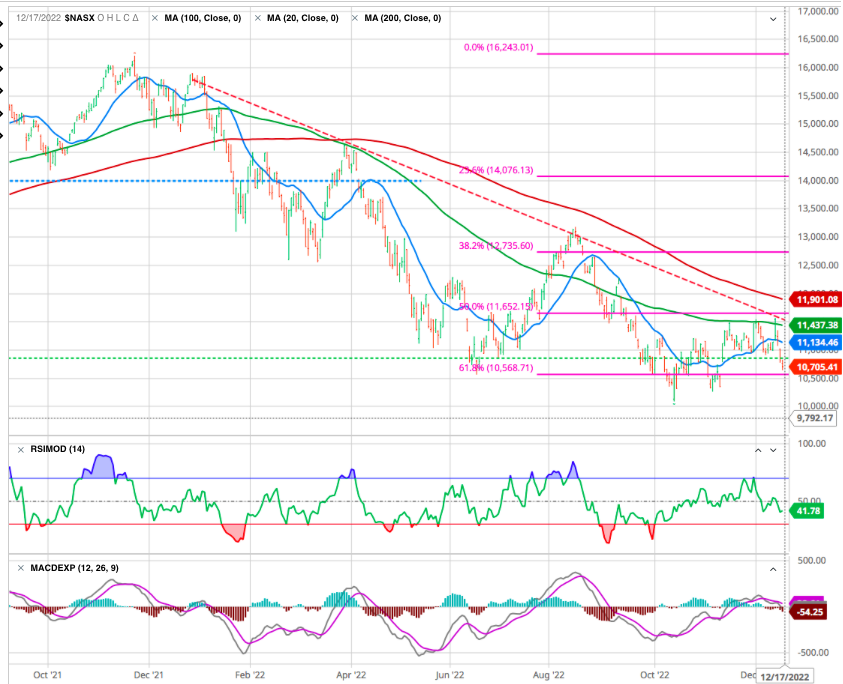 This current bear market in the Nasdaq is now at a magnitude of (-61.8%) so far. Can it go lower from here? Yes. Can the Nasdaq hold the 10,000 area and start to move back to its old highs? Yes, but it’s unlikely. It all depends on which way earnings go from here. But, for now, this is still not a good environment (rising interest rates) for longer duration and higher PE growth stocks. 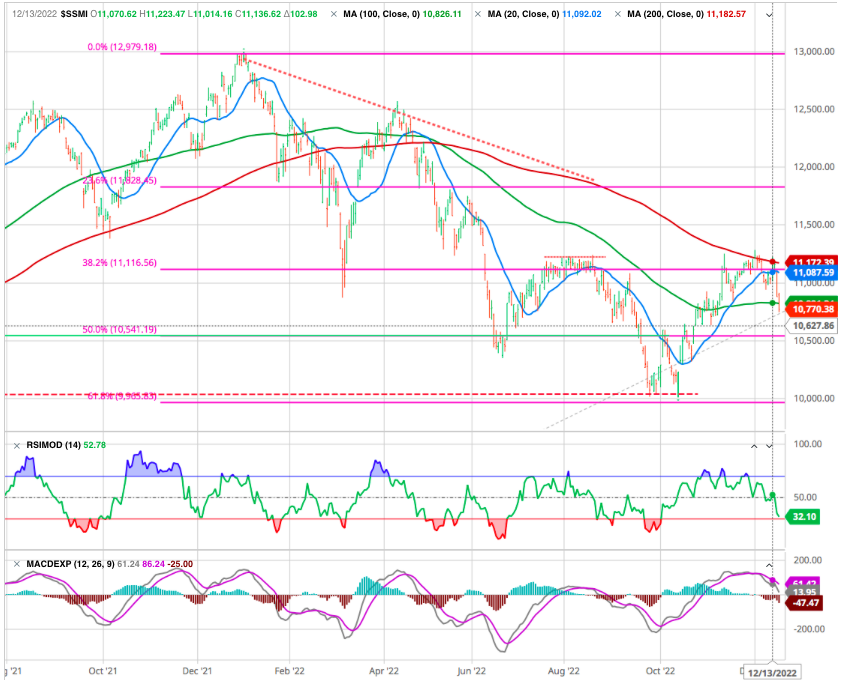 Much of the loss in the indexes this year has not been because of a drop in earnings growth. In fact, we will once again have record earnings this year, $221 per share from $208 per share last year. If indexes follow earnings, then why didn’t they hit new highs this past year? The biggest reason is that we saw a huge multiple contraction in 2022. This was caused by a sharp reversal from falling interest rates to a new, rising interest rate environment.

The reason is that forward operating earnings today will not be at the same level in the future. Since May 2022, forward earnings estimates have declined by 15%. We suspect estimates will fall further, making forward valuation assumptions unreliable.

But then again, stocks usually bottom before the economy does… as I often remind readers, and while I pay close attention to macro-fundamentals along with price action; “(almost always, but with some exceptions) price moves faster than fundamentals”. 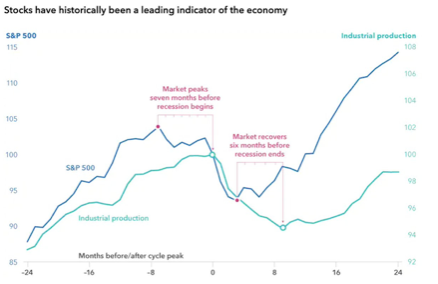 The leading indicators have now declined enough to push the odds of recession to a high level. 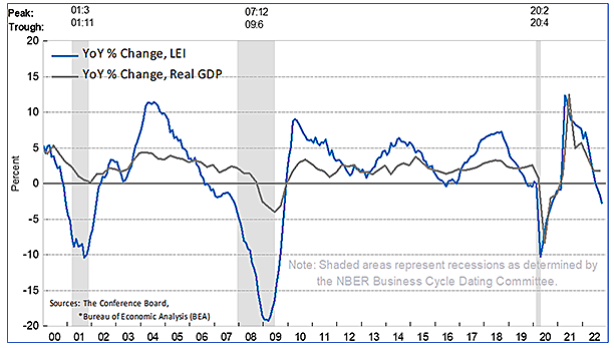 As you can see above, the year-over-year percentage change in the Leading Economic Index (blue line) is falling deeper into negative territory. Similar levels have signaled an oncoming recession in the past. But the question is, what do investors do with this information? 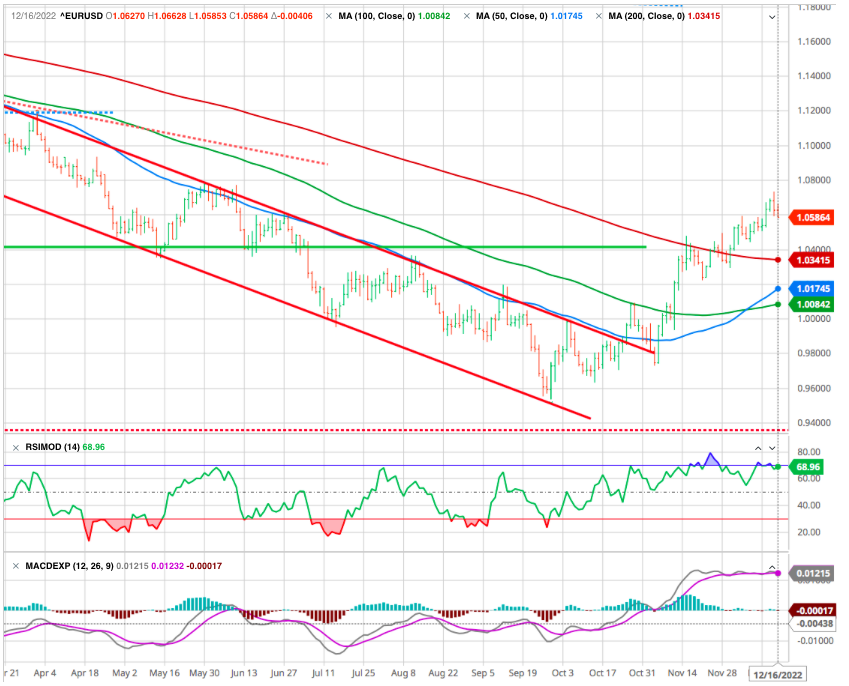 After breaking and testing the down channel the Euro went up testing its former resistance and breaking above the 200 dma. Next resistance is 1.10.

After episodically crossing the $18,000 threshold in the middle of the week, bitcoin has retraced the entire rebound in the last 48 hours. It is now back below the $17,000. This new setback proves, once again, the feverishness of the sector which is struggling to regain the confidence and optimism of investors. The turmoil around Binance in recent days, after the collapse of FTX last month, contributes largely to this nervousness in the market.

No Pivot Unless Something Breaks 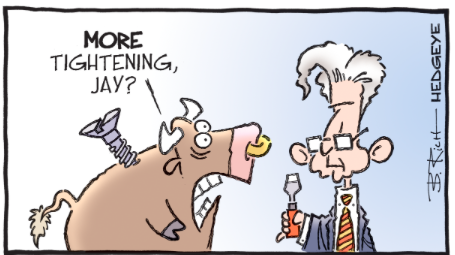 The Federal Reserve’s decision to reduce the pace of rate hikes to 50 bps marks the beginning of the end of this rate hike cycle. However, a reduction in pace of rate hikes is not a pivot, and the Fed’s quantitative tightening program is likely to continue for the foreseeable future.

According to its summary of economic projections, investors should expect sustained interest rates in 2023. The “pivot” will not start until 2024 when the lowest projected rate is still above 3.0%. 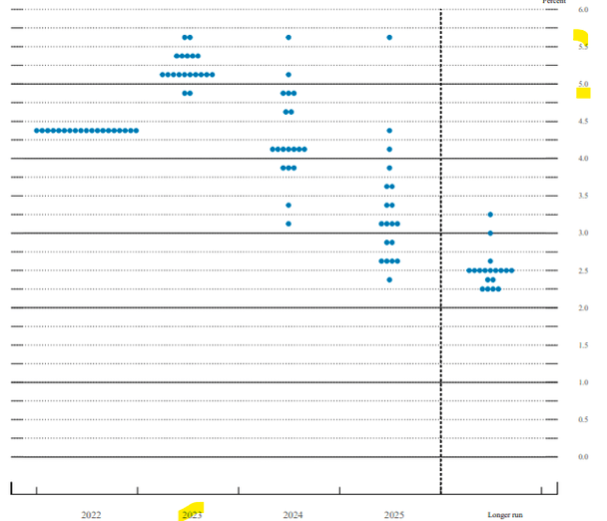 With the Fed tightening into a deeply inverted treasury yield curve, the near-term environment should be risk-off. Hence, equity markets could see increased volatility in upcoming weeks.

“We do not want to overtighten because we think cutting rates is not something we want to do soon, but if financial conditions ease because markets price in such cuts, a peak policy rate of 5.25% may NOT be sufficient to put inflation on a path to return to 2% over time.”

That comment is not what the bulls want to hear. It is also the message that Jerome Powell has repeatedly tried to deliver this year each time the market rallied in hopes of a “pivot.”
When the market rallies, it boosts consumer confidence and eases financial conditions. Such is exactly the opposite of what the Fed wants, as it needs TIGHTER financial conditions to reduce economic demand.

For a quarter of a century now, investors have worked on the assumption that the Fed (and other central banks) lack the nerve to press ahead with tight policy if it hurt asset prices. It’s not an unreasonable belief, as the central bank has caved to market pressures at every time of asking since its epochal decision to rescue Long-Term Capital Management in 1998, and then cut rates to help the market regain its feet. It was the one time when Paul Volcker ever publicly criticized his successor, Alan Greenspan.

There’s a widespread belief that this moral hazard can be relied on. If the stock market falls enough, or if an outright crisis breaks out in the banking system or the credit markets, then the Fed will be there to bail everyone out again.

The problem with this approach is that all of the moral hazard to develop since 1998 has come against a backdrop of persistent deflationary pressure. The Fed, and other central banks, have been able to foster liquidity comfortable in the belief that there’s no risk that they will stoke inflation by doing so.

Once again, the issue boils down to Team Transitory vs. Team Structural. If structural inflation really is back, investors had better ditch their assumption that the Fed always blinks.

The last time inflation posed as big a problem as it does today (with headline CPI above 6% for an extended period of time), the Fed either raised rates at an even faster pace than Jay Powell & Co. have done this year (in 1974 and 1980) or the central bank maintained a policy of continuous tightening for far longer than we have seen so far (in 1967 and 1976). 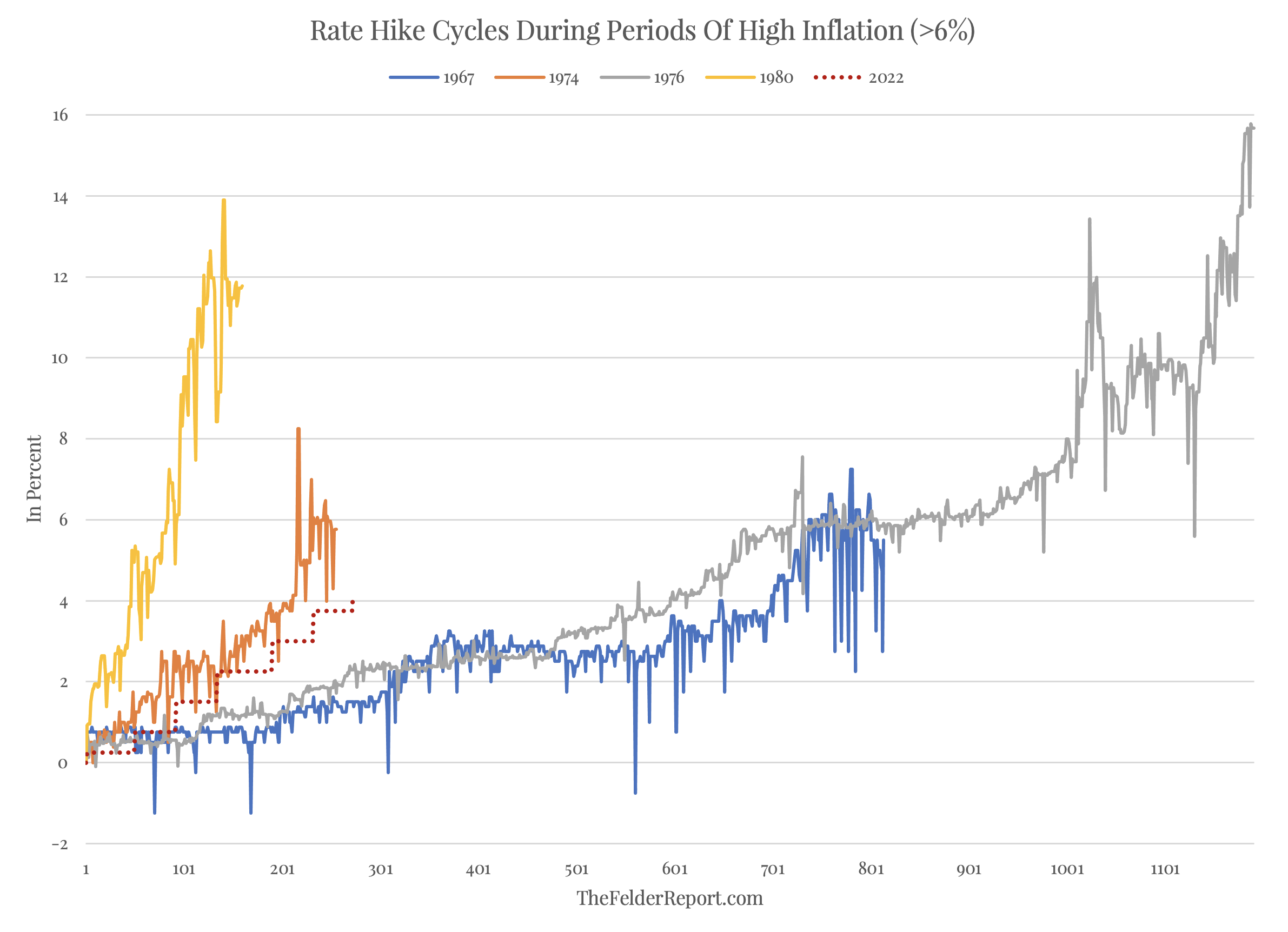 Therefore, as noted recently, the ONLY reason the Fed will pivot on monetary policy to an easing regime is if something breaks economically or financially.

The Fed was extremely clear they are going to hike rates until “inflation” is on a trajectory towards its 2% target. The Fed is currently using very blunt instruments to achieve that goal, which will most likely result in a recession.

Notably, most “bear markets” occur AFTER the Fed’s “policy pivot.”