Market Wrap as of January 13 : Looking for Direction 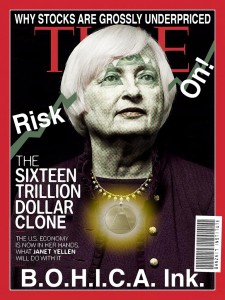 The shockingly poor US employment data is bolstering bonds, while initial equity market gains have been reversed.   It is weighing on the dollar, nearly across the board, and giving some of the accessible emerging market currencies a reprieve from the recent selling pressure.

In particular, many observers are suggesting that it raises doubts over the Fed’s willingness to continue to pullback from its asset purchases, as generally outlined along side last month’s tapering decision.   Some observers have linked it to arguments that the economy has become dependent on QE and at the first sign of withdrawal there is a loss of activity.

The immediate response was to send US Treasuries broadly higher and the dollar lower, against nearly all the major and many emerging markets currencies.We expect the Fed to go ahead with slowing of QE purchases.  Fed officials have argued that there has been a cumulative improvement in the labor market.  A month’s disappointment will not change that understanding, though a second dismal report may be harder to shake off.

The Fed’s Lacker (a non-voting hawk) tried playing up the drop in the unemployment rate to 6.7%, which is not far from the Fed’s 6.5% threshold.

A key part of our story for marked improvement in US growth this year is a substantial reduction in the fiscal drag that held back the recovery in 2013. And indeed the budget deal reached last month strengthened this story by providing a bit of sequester relief this year.  On February 7, the current suspension of the debt ceiling expires. Of course, without an increase in the debt limit, the Treasury again faces the risk of default. There still seems to be unwelcome posturing around this issue—a majority of House Republicans reportedly still want to extract a price for raising the limit, while the White House insists it will not negotiate. 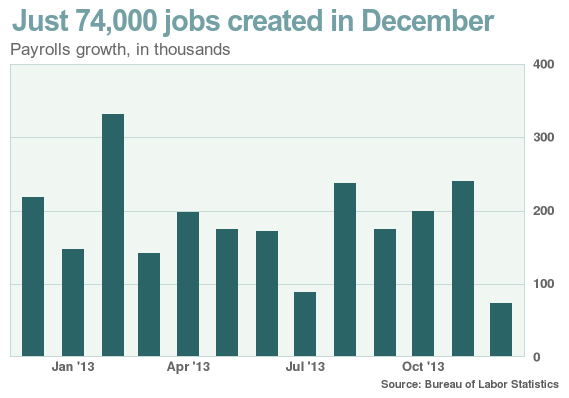 Equities: Equities were mixed, looking for direction. Last week was a mixed bag for eight world indexes. The first-of-year selling last week continued for three of the four Asia-Pacific contingent, with the Japan’s Nikkei and China’s Shanghai posting sharp losses. That’s a reversal for the Nikkei, but more of the same for the chronically slumping Shanghai. The US and European indexes, along with Hong Kong, posted small gains. They have begun the year lower in Japan, although this followed a gain in the Nikkei of over 50% in 2013, ending last year at the highest since 2007. In contrast, Italian equities were solidly bid this week, perhaps bolstered by the ECB’s dovish tone. Canadian equities also posted a solid gain on the week as investors became more upbeat about economic prospects with further CAD depreciation expected. 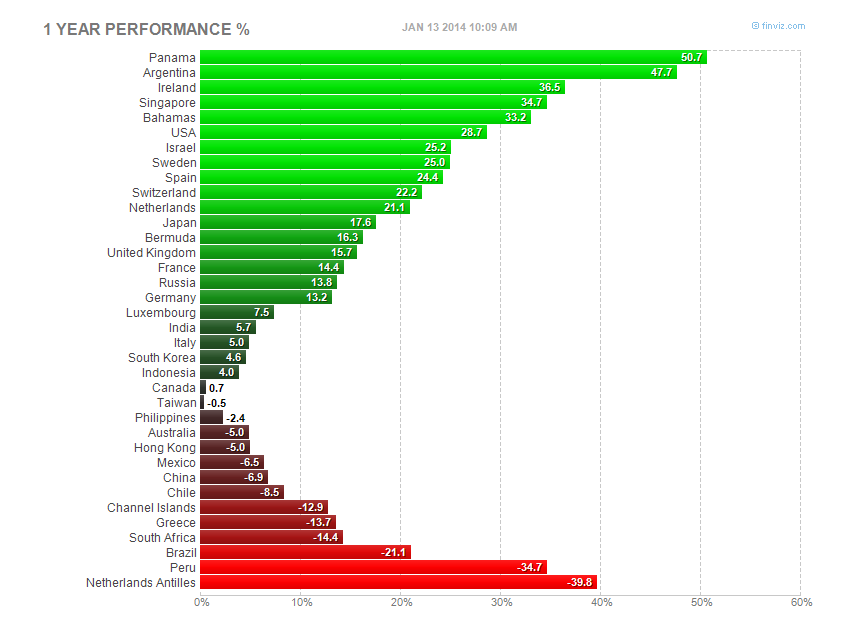 Bonds: Government bonds were range-bound much of the week but caught a bid following the disappointing US jobs print. At the risk of oversimplifying, there seems to be a single overriding driver of the global capital markets in the coming days.  It is how investors see the implications of last week’s dismal jobs data.

Whether we want to blame the rise on the “taper,” excess issuance of bonds by the Fed or extremes in sentiment, what happens from here for bonds and the interest sensitive arena has reached a critical inflection point. Outflows have been large from bonds over the past few months, yet Trillions remain invested in interest-sensitive assets (Bonds, Utilities & Real Estate). From a technical standpoint, what happens to yields, Utilities & Real Estate in the 3-pack below could have a huge impact on investors going forward.

This key support test is coming into play with unique sentiment readings. In May when the Power of the Pattern suggested that rates would head higher, Bond bulls were easy to find … not so much now.

Currencies: CAD was the biggest mover this week among G7 currencies, depreciating to its weakest since September 2009. The sharp decline in US yields in response to the jobs report sent the greenback sharply lower against the yen.  It was the biggest dollar decline in about ten weeks.  It finished below the 20-day moving average for the first time in two months.  The risk is that the yen’s strength weighs on the Nikkei, which lost 2.3% last week to be the weakest of the major bourses. AUD also continued to grind lower.

Despite an apparent belief among the US mainstream media that ‘taper’ is priced in, Saxo Capital Markets warns that Emerging Market countries with large current account deficits like Brazil, India, South Africa, Indonesia, and Turkey face increasing problems. As the following chart shows (and highlghted most recently by Brazil’s highest FX outflows since 2002!) could see their currencies weaken even further if the Fed’s taper plans result in a deterioration of global risk appetite. 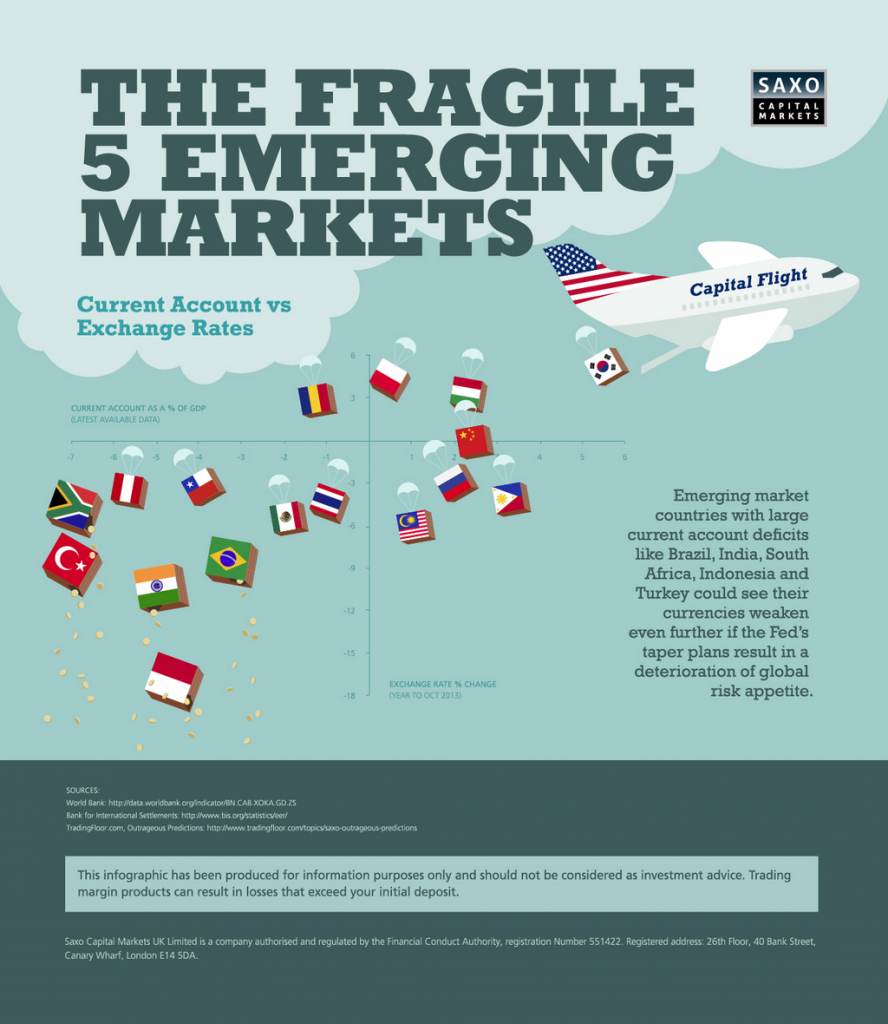 Commodities: Oil prices were bid early this week on concerns over Libyan oil supplies. But continued upbeat reports on US crude production appears likely to leave prices little changed for the week and down for the year.

The last 2 weeks have seen a 35% collapse in Baltic Dry Index  When this indicator of global trade rises, everything is rosy and reams of asset-gatherers and talking-heads will quote it as indicative of how great the world is. When it drops – silence.  There is a relative seasonal pattern over the holiday period – with shipping costs rising into the holiday and falling after but… this is the biggest drop from a Christmas Eve since at least 1984, 30 years! 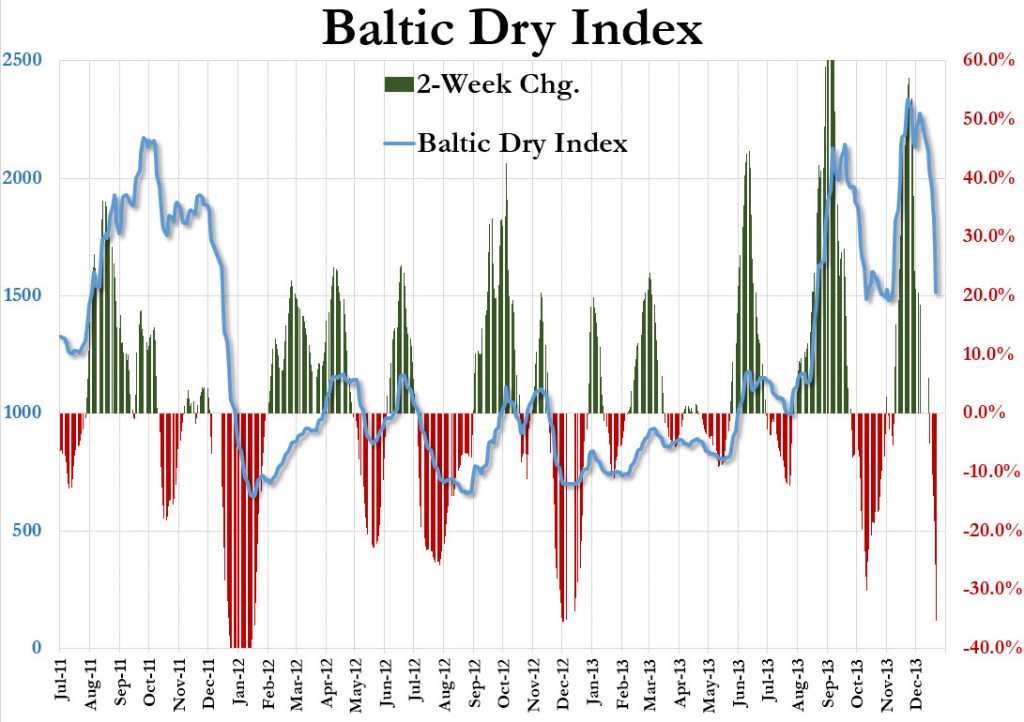 How markets are rigged against you – by Amanda Lang

Amanda Lang, former financial journalist at CNN,  looks at ways the financial system is rigged in some people’s favour and how really Wall Street is working

After years of reporting on some of the best examples of Wall Street stacking the deck in its favour, she has concluded that the entire system underpinning the global economy is rigged in some form or another. And it’s not just financial markets that are at stake. The real economy, with factories, services, goods and jobs for real people, is under threat. “There’s a few smaller, inside actors who always seem to win,” he told Lang. “They have more information than anyone else.” Everything from the price of food, to currencies, financial transactions known as “swaps” and interest rates are implicated, she says.

Every day, trillions of dollars are exchanged by buyers and sellers on trading floors across the world. The places where that happens are colloquially known by the faceless moniker of “the markets” but every time somebody buys a barrel of oil, a shipment of potash, a Royal Bank share or a Japanese yen, there’s a real person behind that transaction. 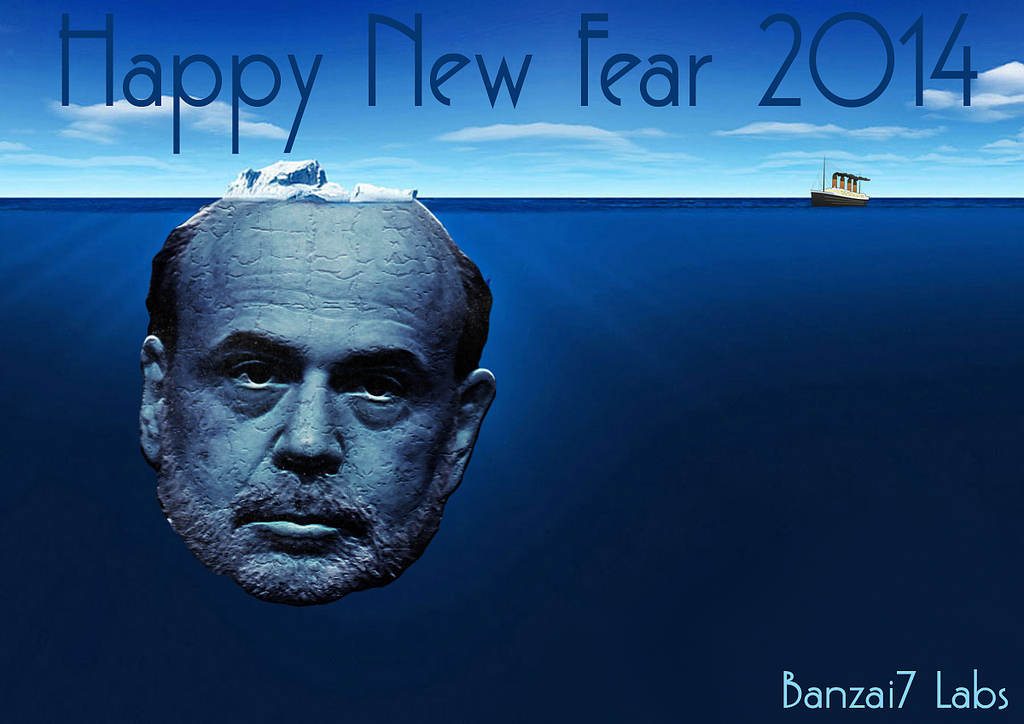