Market Comments as of October 28

We leave the introduction, which should be enough, to the real Maestro:

“There is no means of avoiding a final collapse of a boom brought about by credit expansion. The alternative is only whether the crisis should come sooner as a result of a voluntary abandonment of further credit expansion or later as a final and total catastrophe of the currency system involved.”

Markets Settle into a New “Normal” 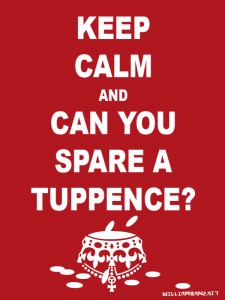 The damage from the government shutdown will likely be temporary, assuming there is no lasting damage to confidence. Congress took significant political damage from this month’s debacle. So we believe the midterm election provides a huge incentive to reach a budget compromise as legislators attempt image repair. Of course, investors, businesses, and consumers may assess the probabilities differently, and their judgment will ultimately be reflected in their spending behavior.

Everywhere we look, everyone argues the same things as the bullish excuse — QEternity. Stocks will continue to rise at an unrelenting pace because the Fed will keep pumping money into the system.

The result of this, unfortunately, is that money is not being put into the economy, but rather into speculation. This is a problem for SuperBen and the League of Extraordinary Bankers. Yes, they must keep stimulus in place and allow time to reverse inflation expectations. However, the stock market’s current pace is making time short. It is for this reason I believe there is a distinct possibility that this week the Fed could surprise us all by acknowledging the pace of stock gains, and express concern over speculators.

Some argued this will never happen, especially since a “dovish” Yellen is next up at bat. The notion that Yellen would ignore a potential bubble in the making is not totally false. Deutsche Bank made waves when it suggested that the Fed has now missed its tapering window, and will plough on thorough until the next downturn without ever lowering the pace of flow. This week SocGen has decided to make waves of its own with an even crazier pills idea: instead of no taper… ever… the Fed will not only not announce a Taper in coming FOMC meeting but will in fact hike QE!

In retrospect, this suggestion as ludicrous as it is, makes sense. After all, the Fed has lost so much credibility, it will never make up for it with a taper in October, December, March or June. In fact, the longer the Fed delays tapering (which it now will never do), the greater the confidence loss. So since there is no downside to going full retard and never tapering again, the Fed may as well go the other way: after all, it is not as if anyone on the FOMC understands what a collateral shortage is, or how dire its implications are.

And the other upside from the Fed announcing a $15-20 billion, or more, increase in October or shortly thereafter, is that it will merely bring the grand reset that much closer. Which, considering the centrally-planned, crazy pills New Normal world we live in, is easily the best possible outcome.

In the past Yellen brought up concerns over extreme conviction in asset markets and disconnects from underlying fundamental reality. The timing of this could be ideal for underlying risk-off behavior to manifest in absolute price declines.

So do your worst: Janet. 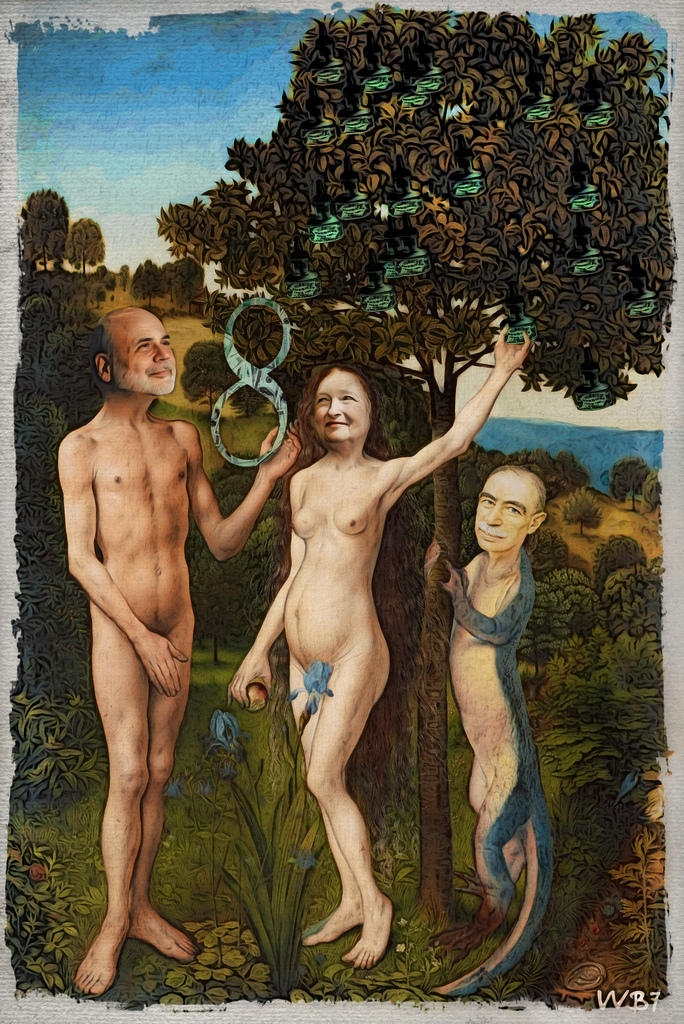 We saw more signs of progress in Europe: The ECB, which will become banking supervisor next year, announced a new (stricter) round of stress tests for 124 Eurozone banks. ECB President Mario Draghi said that this time, the ECB will not hesitate to fail banks: it wants the market to view this stress test as credible—the last couple weren’t.

Stronger economic data, but tighter monetary policy in China: China’s currency rose to another new high against the US dollar, as manufacturing, business sentiment and new home prices were all up. The People’s Bank of China (PBoC) tightened policy; the SHIBOR overnight rate (equivalent of Fed Funds) rose to 4.4% – the highest rate since the PBoC engineered a late-June credit crunch. Analysts seem to think that this time it’s more a case of general tightening due to rising inflation concerns. –See our comments here

In Japan, economic activity is moderately improving: September’s trade deficit was wider than expected, driven largely by larger and more expensive energy imports (no domestic nuclear energy production and the weaker yen). September was the 15th consecutive month of trade deficit, which reached a new 6-month high. Exports were up 9.8% from a year earlier, but imports gained 13.9%, largely because of the cost of imported fuel. In other news, Japan’s biggest financial institutions increased holdings of sovereign debt, maturing in 10 years or more, for the fifth consecutive month. -See below a full report –

Equities: Equities are mixed. Rallies continue in the US, Canada, UK, Germany and Australia on a mixture of upbeat economic and earnings data, and expectations of supportive monetary policy. Disappointing data held back France and Italy.  but MSCI Emerging Markets was down 1% and Japan fell sharply, but this left it in the erratic trading range it’s been in since spring, up over 50% from a year ago. 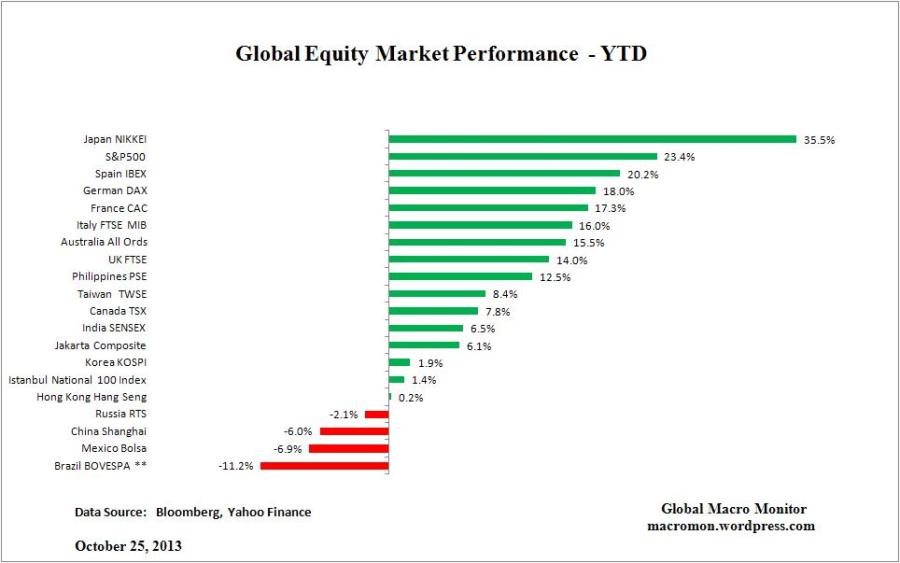 A Boost From Asia?

This year hasn’t been kind to all stock indexes, especially when it comes to key Asian stock markets! The chart below reflects that the Hang Seng and the Shanghai Index are lagging the S&P 500’s performance by a large margin so far in 2013. The next chart reflects that both the Shanghai & Hang Seng index are facing multi-year resistance/channel lines at (1). The Emerging markets have been some of the weaker performing stock markets in the world for the past few years.

Bonds: Bonds were generally bid on speculation that central banks could be easier for longer.

Is there a trend here? – Everywhere one reads press puffery about the “American manufacturing renaissance” the only problem is each time the numbers come out they show further deterioration. In fact, if one fades the nonsense, then one wants to remain long fixed income – as in QE-infinity (but keeping duration short for fear of stagflation) and probably, short USD.

George Carlin on the American Dream

“The only true American value that is left… Buying Things…” There’s a reason for why education sucks and why it’s never going to be fixed, and that’s not the only hard hitting truths that George Carlin shares in this video…

Currencies: CAD weakened as the BoC struck a decidedly more dovish tone. EUR rose to its highest in two years, fueling fears of another unwanted headwind in an already tepid  eurozone recovery.

Earlier this year, 80% of investors became bullish on King Dollar, taking a position that owning the U.S. Dollar would provide them some form of portfolio protection, hoping it would help them enlarge their asset values. Was a false sense of security in the air? At the same time many were becoming bullish on the Dollar, the crowd didn’t notice it was hitting a 9-year resistance line that has held it in check time and time again.

Currently the decline in the Dollar has taken it down to a multi-year support line and few seem to be excited about King Dollar as only 25% of investors are attracted to the Dollar!

After briefly topping $110 just last month, the big oil rally faded fast. Monday marked crude’s first visit below $100 since July. And it didn’t stop there…By the end of the week, crude pushed as low as $96. That’s a 4% drop so far this week. And it brings us one step closer to my $90 target I set on Sept. 18.

Since 2011, crude has sharply reversed every time it made a run toward $110. This year is no different. You can see on the chart where crude failed just above $110 in early 2011 and early 2012. We’re seeing very similar action this week after yet another go at the highs with no follow-through… 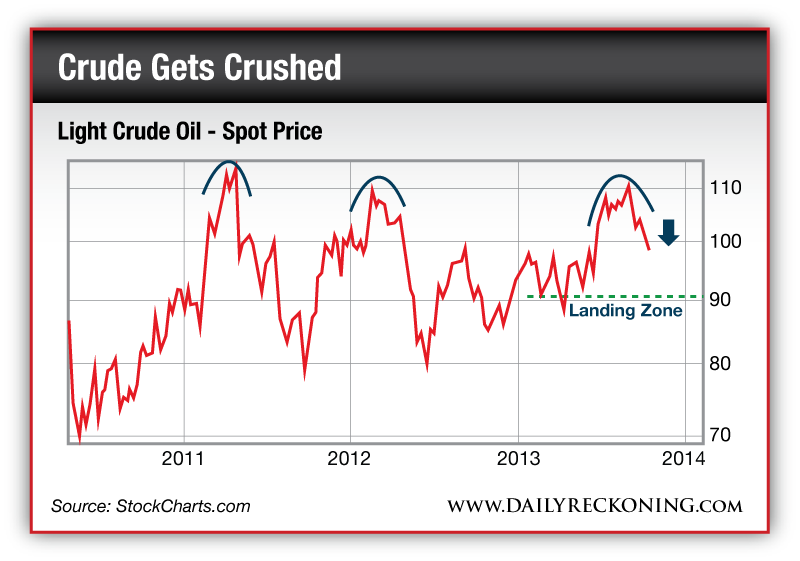 Crude is hitting four-month lows as oil inventories hit their highest levels since June at 5.2 million barrels (that’s a rise of nearly 20 million barrels over the last month, according to the Wall Street Journal).

As much as we loathe saying “we told you so”,  the truth is that just 3 weeks ago we pointed out the fact that the Gold Index was being heralded as proof of the world’s great recovery was a mistake.

This week BofAML’s MacNeil Curry is changing his view on gold from bearish to bullish. The impulsive gains from the 1251 low of Oct-15 and break of the two-month downtrend (confirmed on the break of 1330) tells him that a medium-term base and bullish turn is unfolding. BoFAML looks for an ultimate break of the 1433 highs of Aug-28, with potential for a push to 1500/1533 long term resistance.

In the next several sessions Curry suggest buying dips into 1309, cautioning that this bullish view is “wrong” if gold breaks below 1251. For those awaiting additional confirmation of a turn, Curry notes you need to see a break of 1375 (Sep-19 high & right shoulder off a multi-month Head and Shoulders Top). 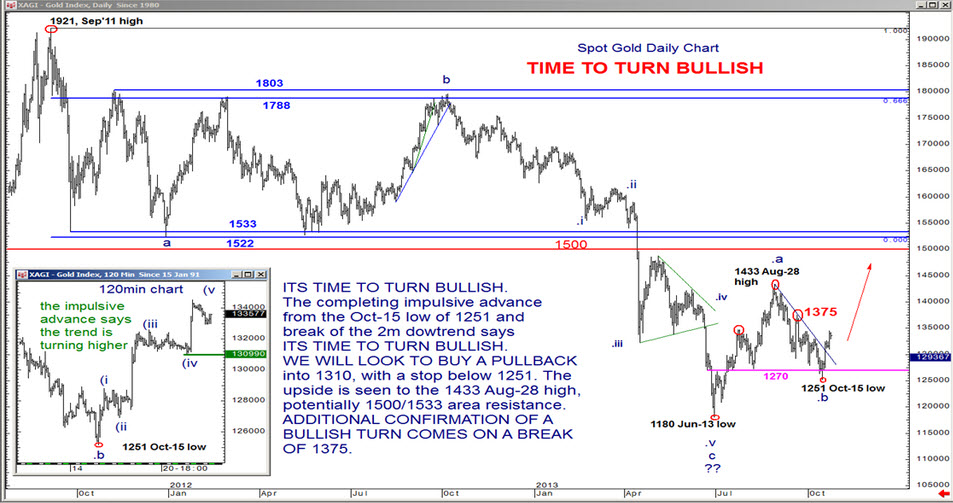 The Gold Miners ETF (GDX) got a nice bounce the last seven days with a break above the late August trend line. Even though the big trend remains down, the short-term trend is now up with this small breakout. Longer-term, a potential double bottom is taking shape with the August highs marking key resistance. The indicator window shows the Gold Miners  holding above its prior low and forming a bullish divergence.

Abenomics : One Year After

One year later and due mainly to the fact the Japanese stock market has risen an astounding 70% year-over-year, talking-heads, politicians, and  central bankers proclaim Abe’s trip into the monetary policy black hole as a success (it would seem on that basis that the head of Venezuela’s “central bank” deserves a Nobel prize). Abe has managed to devalue his nation’s currency by 25.5% against the USD in that time and the price of Japanese government bonds (despite some early teething trouble with the government’s repressive activity) is practically unchanged up 0.75% on the year. But away from the ‘market’, Job creation remains stifled, inflation is rising (but thanks to import prices) and wages languish down 0.9% as the trade balance is collapsing. 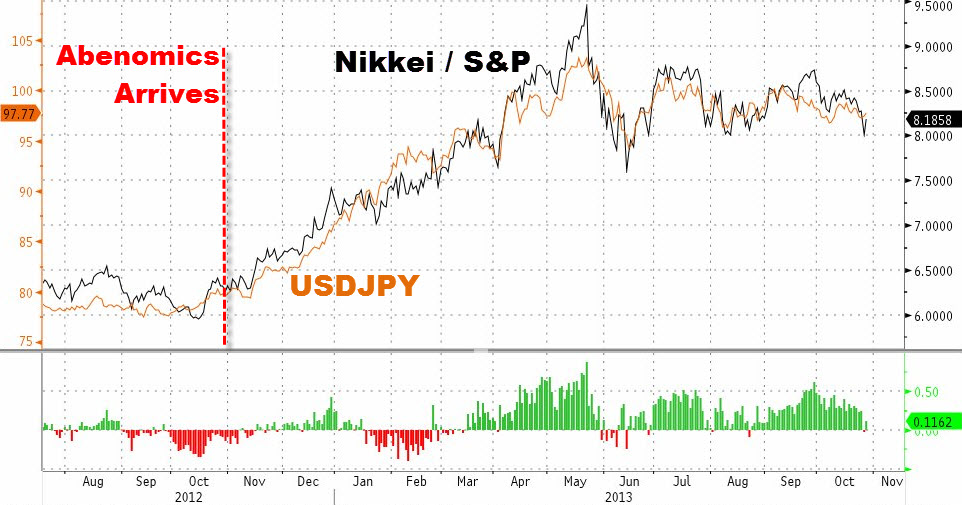 see complete story ft blog    Also on here : FT : Abenomics one year on and on our blog

Don’t worry and be happy … 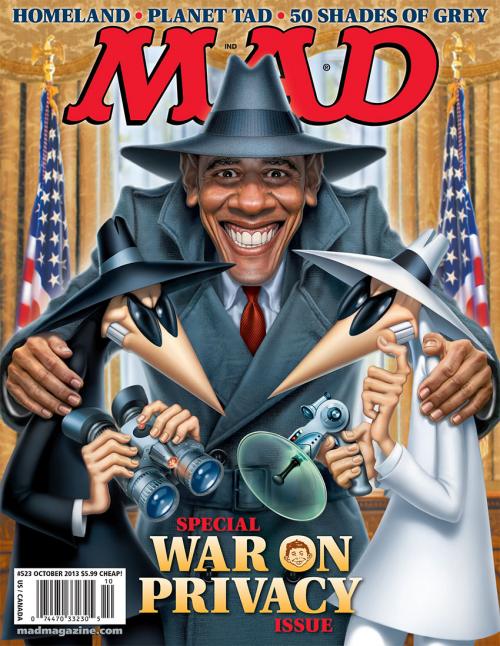