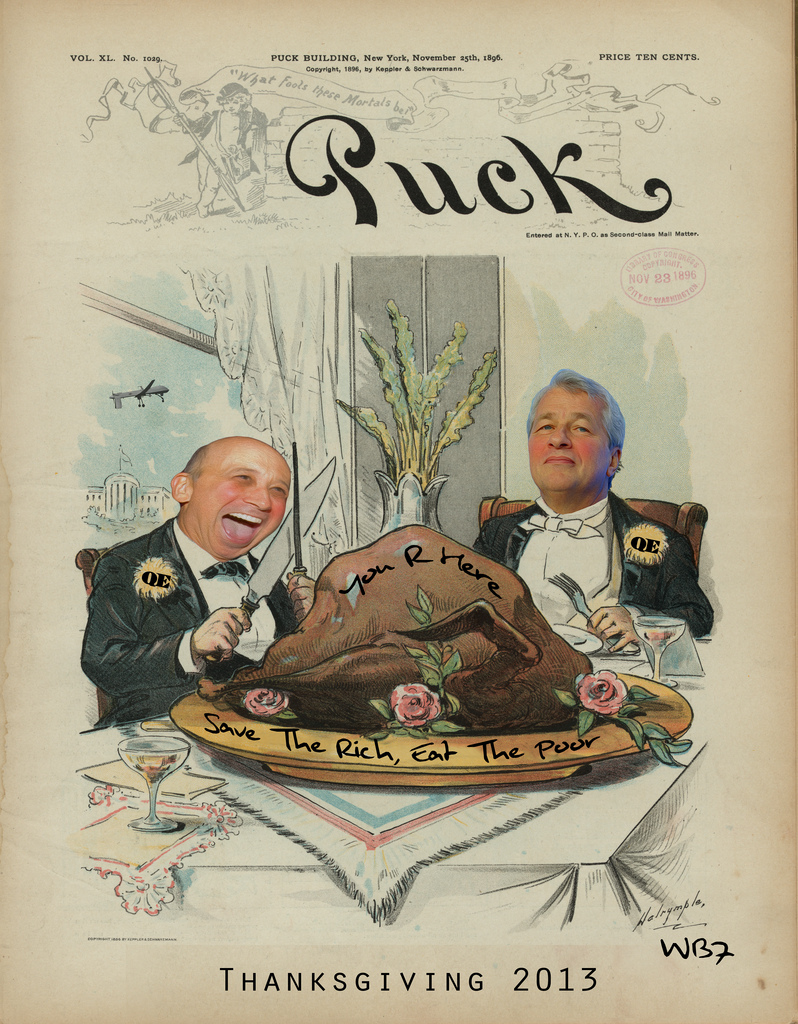 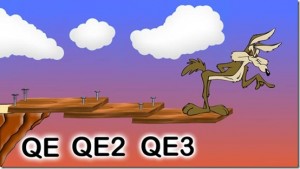 Really ?…Yes and because it is a unique situation we cannot predict the way it will end. However what we can bet on is that the law of gravity still exists on this planet and this big monetary experiment is not going to end well ! We also saw a desire to align the start of tapering (whenever that is) with strengthening forward guidance on administered rates in order to mitigate any tightening signal markets may inappropriately extract from tapering. And there is no consensus yet within the FOMC on the best way to fortify forward guidance.

NY Fed President Dudley (a dove) sounded upbeat about the economy in a speech last week. Fed Chairman Bernanke hinted at the Fed moving from quantitative easing (QE) to “forward guidance”, saying “The mix of the tools will change somewhat over time.” Separately, he called the rise in bond yields “unwelcome and unwarranted”. For quite some time no serious Fed official has outlined the need for a limited Federal Reserve in the way that Charles I. Plosser, President of the Federal Reserve Bank of Philadelphia, did in a speech last week at  the Cato Institute’s 31st Annual Monetary Conference, Washington, DC.

He essentially proposes four limits on the US Federal Reserve:

“These steps would yield a more limited central bank. In doing so, they would help preserve the central bank’s independence, thereby improving the effectiveness of monetary policy, and they would make it easier for the public to hold the Fed accountable for its policy decisions.”

Both Fisher and Plosser will be voting members of the FOMC this coming year. Look at the lineup and the philosophical monetary view of each of the members of the FOMC. Next year we could actually see three dissenting votes if things are not moving in a positive direction, although another serious proponent of monetary easing is being added to the Committee, so it may be that nothing will really change.

Meanwhile, the ECB sent out shockwaves last Wednesday when unnamed officials claimed the Bank was considering cutting its deposit rate to -0.10%. The reports noted that there was not yet a consensus on the Governing Council. And President Draghi tried to dampen speculation on Thursday. But the specificity of this policy chatter does highlight the risk that the ECB could yet experiment with negative policy rates; an experiment which some fear could end up doing more harm than good.

The financial conditions in Europe do not appear supportive for the regional economy that has graduated from contraction to stagnation.  Money supply growth is slow.  Lending to businesses and households continues to contract.  The decline in inflation (disinflation) is threatening to morph into falling prices (deflation) in a growing part of the euro area. 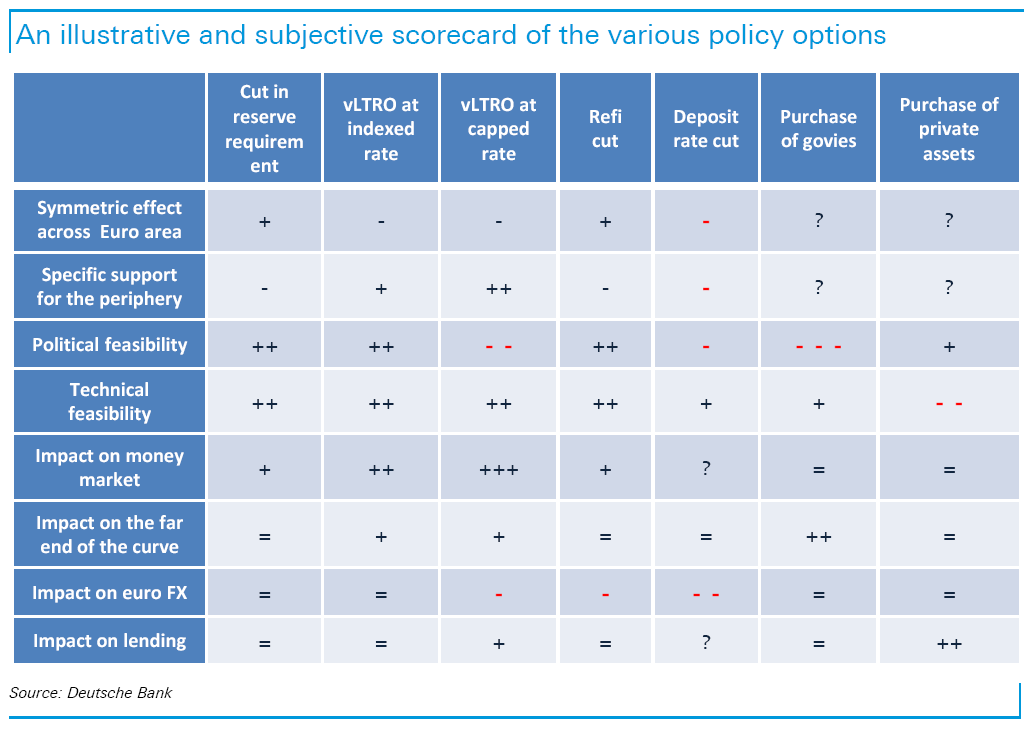 From Deutsche Bank.  It is a formalized look at the many of the options the ECB.  It is not exhaustive and today’s talk about a possible lending-for-funding type of LTRO is not included in the matrix.  Perhaps it is most useful as a broad framework to structure one’s own thinking rather than a set of answers.

It is in the ECB’s interest to play up their options and drive the message home to investors that their resources have not been exhausted.  However, as we have argued, none of the options are particularly appealing.  Another LTRO is likely to seen minimal participation ahead of the ECB’s stress tests.  Another cut in the refi rate to bring to zero might lower dampen overnight rates a bit, but they are already very low (except during the run up to the end of the reserve period and the end of the month).  It is unlikely to boost lending or arrest disinflationary headwinds.

The ECB can boost excess liquidity by reduced the required reserves.  However, may not boost lending.  European banks are continuing to de-leverage and the new regulatory demands appear to be an important driver.  The ECB can only make current collateral more effective by reducing the haircuts imposed or widening the acceptable universe, but may also not be particularly effective is boosting lending, or addressing the financial conditions more broadly.

While the ECB has acknowledged it is technically and legally ready to have a negative deposit rate, most officials seem clearly and understandably reluctant to take this unprecedented step.  Yes, a couple of countries like Denmark and Sweden have had negative deposit rates, but not major central bank has, including Japan, despite yesterday or ZIRP (zero interest rate policy).    Not only are there intended and unintended consequences, but there are foreseeable and unforeseeable consequences.  It could potentially further squeeze the very same banks that the ECB would like to boost lending.

Outright bond purchases, as in a genuine quantitative easing program, while theoretically possible, are highly unlikely.  It would seem to violate some key agreements.  That Germany feels quite adamant was evidenced by the resignation of not one, but two, German members of the ECB in protest to Trichet’s sovereign bond purchase program (SMP).   Remember, the German Constitutional Court ruling on OMT is still pending and expected in Q1 14. 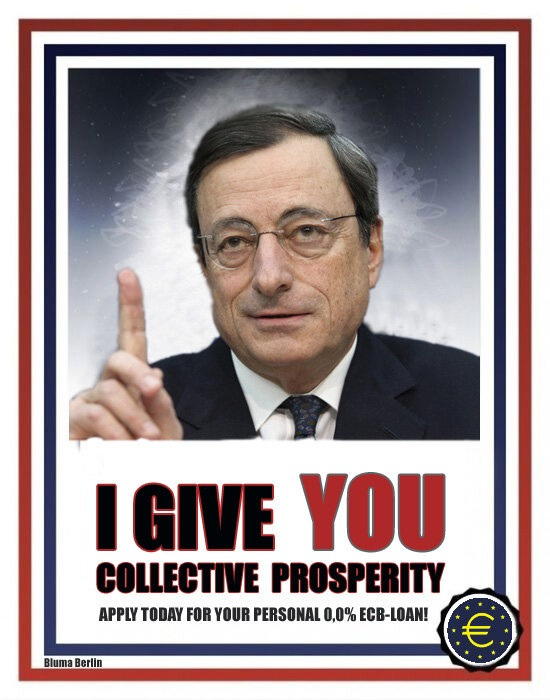 In China, The MNI China Business Survey slid and the HSBC Flash Manufacturing PMI was soft. Peoples Bank of China Governor Zhou said that China will ‘basically’ end intervention in the currency markets and move to market-based floating exchange rate … but didn’t suggest when.

Equities: Equities began the previous week with considerable momentum—major indexes in the US and Germany hit record highs. However, worries that Fed tapering could start soon eroded investor confidence and slowed the rally. The tech-heavy NASDAQ continues an impressive rally in the US, crossing the 4000 level for the first time since the tech bubble burst 13 years ago. Major eurozone equity indexes are also up significantly, as investors perhaps anticipate further easing from the ECB.

Bonds: Rates ended up a bit on OK economic news and a sense that the QE taper might start a bit sooner than previously expected. Recall that it had risen to as high as 3.00% during the summer in anticipation of tapering but rallied after the Fed decided not to pull the trigger, sending the yield down to as low as 2.50% in October. Dovish speculation on the ECB and BoE has trimmed European yields as well. 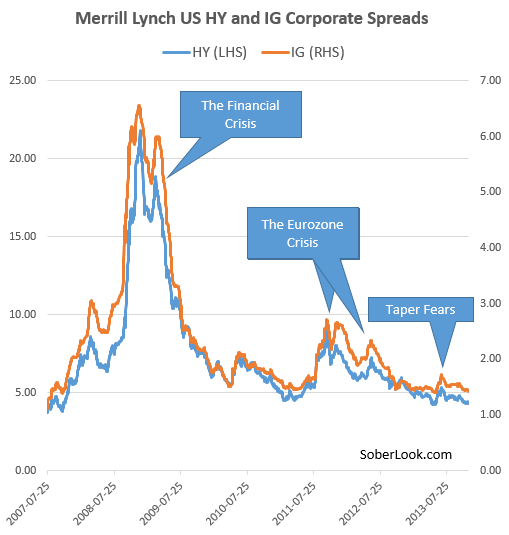 That complacency, combined with the artificial suppression of interest rates to historically low levels, has led to a “chase for yield” in potentially some of the most dangerous places like the “high yield” (a much more marketable term than “junk”) credit market.

Currencies: Last week EUR dropped following reports that the ECB could be considering a cut in its deposit rate into negative territory, but it found some traction after Draghi dampened the negative rate speculation. JPY, AUD and CAD are significantly weaker again this week.  It was Bank of Japan (BoJ) Governor Kuroda’s turn to talk the Yen down; he said the recent decline in the yen was not abnormal and the BoJ remains open to further easing. The Yen fell 1% against the dollar and a bit more against the euro. Emerging Market currencies are acting like a call on QE: rallying when more QE seems more likely, and vice versa. 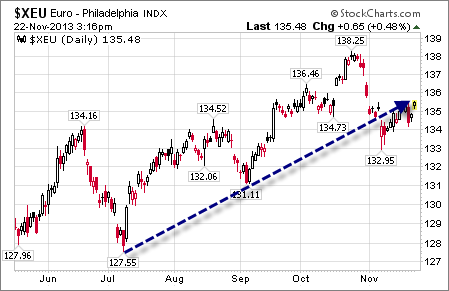 Commodities: In spite of the interim agreement with Iran, oil prices (as measured by the Brent global benchmark) are little changed. However, the US benchmark West Texas Intermediate (WTI) dropped below $93 per barrel for the first time since May following reports that US crude stockpiles rose for a ninth straight week. WTI has dropped steadily since flirting with $110 in early September. Gold is little changed on the week but has also ground lower since September and is well down on the year. Gold’s drop through 1260 negated the bullish bias. The drop below the Oct low shifts focus to the 6/28 close at 1234. 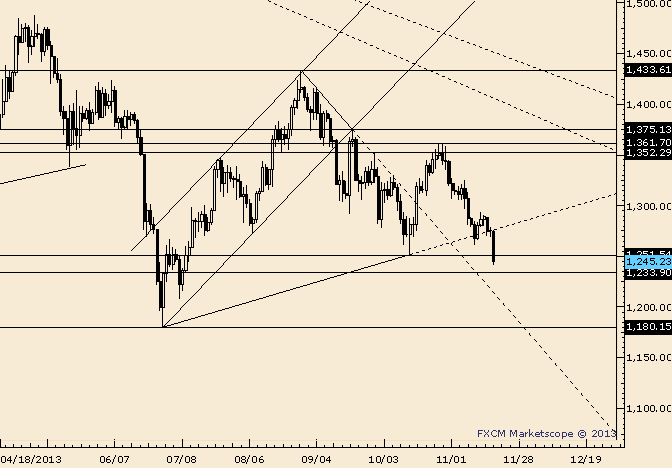 Trading Strategy: Stopped out at 1260. Flat for now. -The trendline that extends off of Aug and Sep highs may serve as support.

Another quick, painful tumble for gold futures could be in store for us to close out the year.

After four straight days of declines, gold futures sit near $1,270. That’s the “danger zone” for anyone who’s watched the daily chart develop this year. It’s the same area where the yellow metal finally caught a bid last month and managed a $100 run higher before getting turned away near $1,360.

I don’t know what will happen from here. Both the chart and the price action have been nothing short of ugly over the past couple of weeks. If buyers don’t swoop in to save the day here, gold could very well take the elevator all the way down to $1,200. That means we’re one step closer to negating the higher low posted in October…

Remember, the $1,200 mark is also near the 2013 lows. Ouch. There’s nothing to like about how this chart is shaping up to end the year. Barring some sort of a golden miracle, it looks like gold will end 2013 on the naughty list.

Virtual currency bitcoin traded to over $1000 on Wednesday. The Dow shot to over 16,000. And China decided to go even further down the capitalist road.

It could also make gold obsolete. This new money is easier to use and costs nothing to store. But regulate it? That may be impossible. Bitcoin is arguably the most disruptive monetary technology yet invented. It could be the biggest financial story since gold. Nothing like it has happened in 6,000 years – an entirely new… and better … kind of money.

In fact, it could help bring in a whole new phase of economic development… Watch BELOW for more details …

The following graphic was put together by the folks at Promontory Financial and is extremely telling. It looks at three ways in which a U.S. citizen might choose to go about sending a $1,000 downpayment to Europe for the purpose of renting a vacation home. They put Bitcoin side by with with a traditional bank wire as well as a credit card transaction. The results might surprise you… 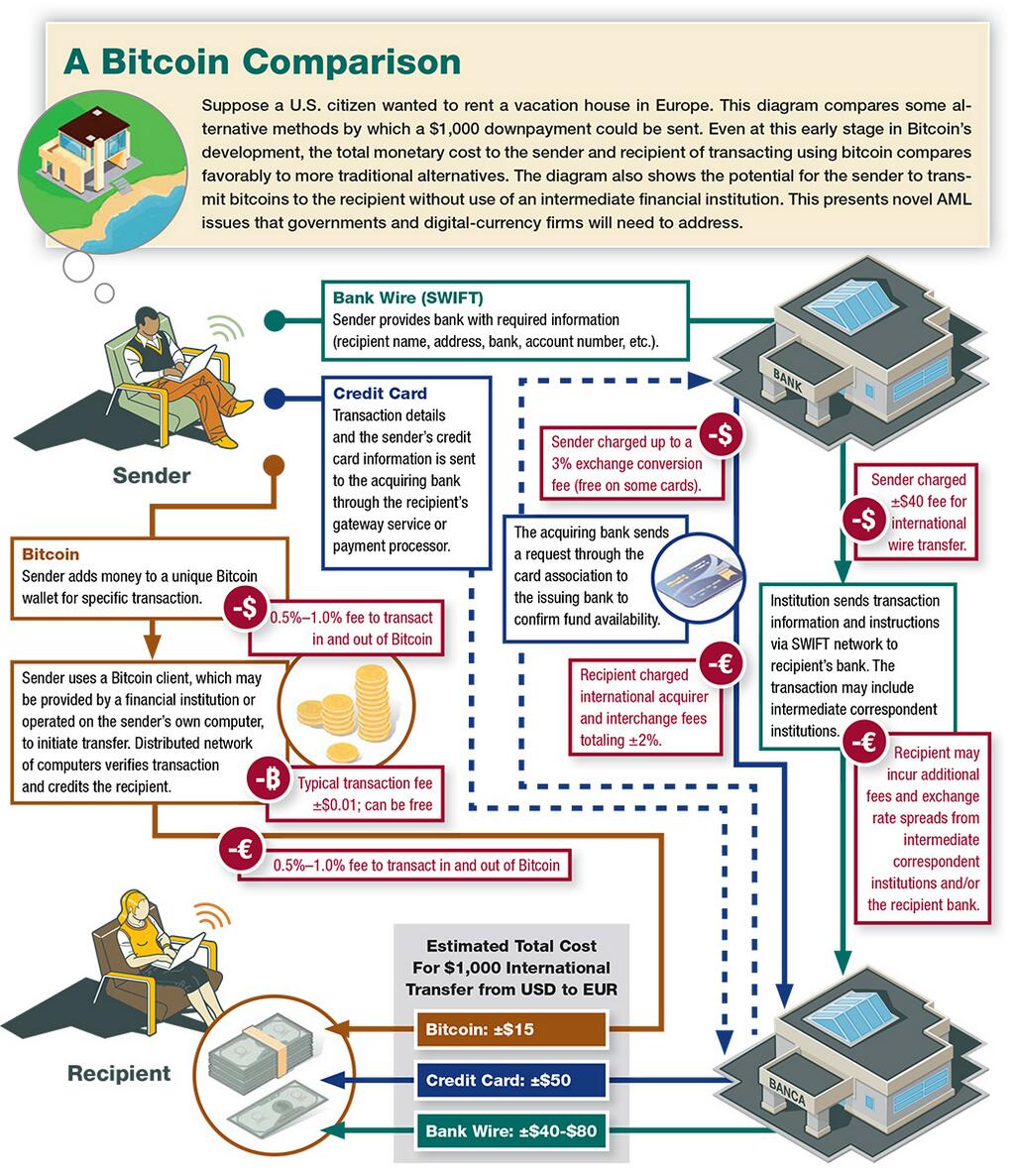 Apparently, you can now use Bitcoin to pay tuition for a master’s degree in cryptocurrrencies. All you have to do is go to Cyprus. There, the University of Nicosia — the first institution of its kind — will accept the cybermoney.

“We are acutely aware that digital currency is an inevitable technical development that will lead to significant innovation in online commerce, financial systems, international payments and remittances and global economic development,” writes CFO Christos Vlachos on the school’s website.

The university deeply depends on its online students, which face transaction fees up to 10% when applying. Accepting Bitcoin makes that a nonissue. In addition to that, Cyprus’ economic woes coupled with their one-off levy on bank accounts make it the ideal place for the disruptive digital alternative to the euro.

“More than any other nation,” writes The Daily Dot’s Tom Sampson, “this Mediterranean island republic has seized upon this international, unregulated currency. During the midst of the island’s banking crisis, when politicians discussed the idea of seizing bailout funds from private bank accounts, citizens rushed to transfer their money into Bitcoin in order to keep it from prying hands.”

When I checked yesterday evening, a Bitcoin could be bought for more than 1000. Just a two weeks ago, we could’ve bought one for $200 less. Were we fools not to buy? Will there be another opportunity? Should we take a chance in that case? 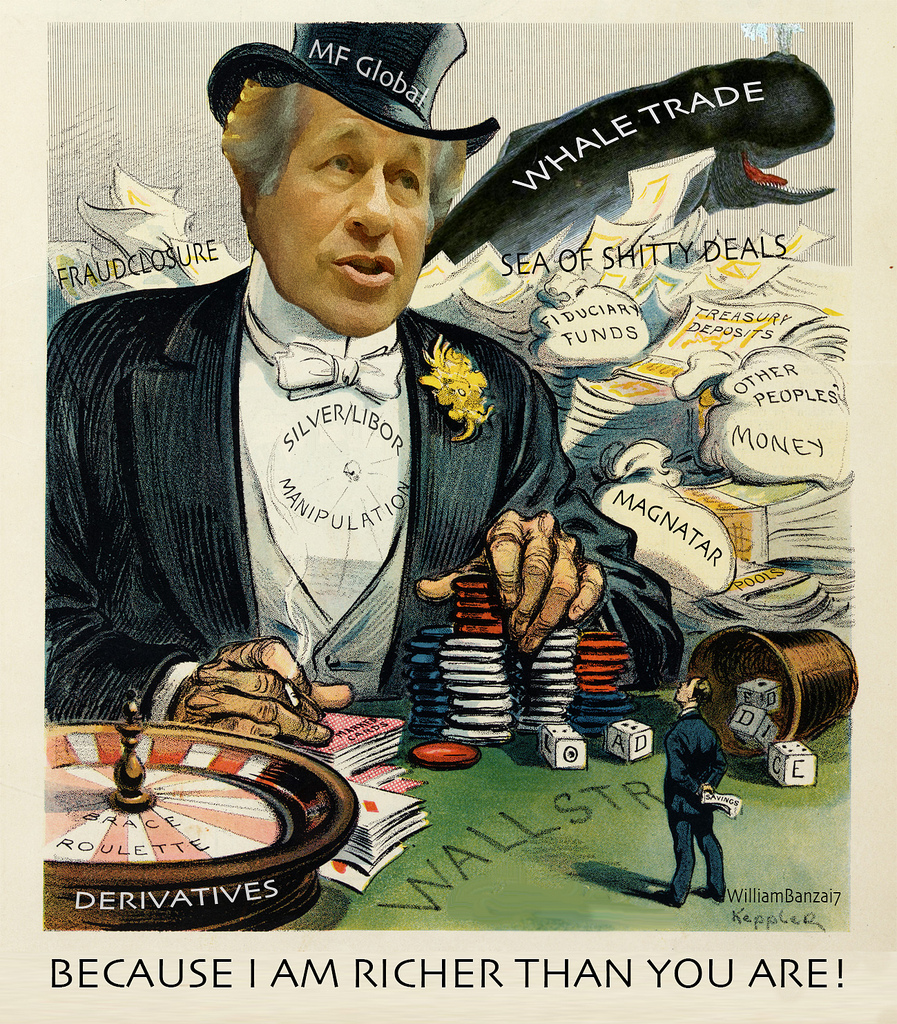