Market Comments as of November 18 : Printfest 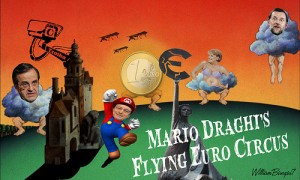 In Europe : Gradual improvement. The Bank of England upgraded its economic outlook; and it appears that Spain and Ireland are ready for clean exits from their rescue programs. This was Italy’s 9th consecutive down quarter…but we’ll see positive growth in Q3 if the improving trend holds.

In Japan : Happy Anniversary, Abenomics! A year ago, former Prime Minister Noda called for the elections that brought Shinzo Abe to power. Since then, the Bank of Japan’s balance sheet has tripled, the yen is down 20% against the dollar and MSCI Japan is up 80%. As expected, Japan’s Q3 GDP growth was soft, at 1.9% (annualized), restrained by falling Asian demand rising energy imports. Q4 GDP growth is widely expected to be over 3%.

In China : No Surprises. The communique of the Chinese Communist Party’s 3rd Plenum emphasized giving competition and market forces a “decisive role” in the economy, but didn’t suggest changing the role of state-owned enterprises or loosening political control.

In the U.S. : Although highly anticipated, Dr. Yellen’s testimony offered few surprises. Yellen certainly came off as dovish during the hearing, but probably no more dovish than she has long been thought to be. And frankly, we didn’t hear much different in her tone from Bernanke.

In the question and answer portion of the hearing, Yellen signaled strong support for the quantitative easing (QE) program specifically. Indeed, she forcefully argued that QE has made a “meaningful contribution” to growth. And while she acknowledged QE can’t go on forever, she opined that the benefits of asset purchases still outweighed any costs and gave no sense as to when she expected tapering to begin. In fact, she sounded in no rush to remove policy accommodation, arguing that it is important not to remove support too soon and more specifically that the Fed should not remove support while the recovery is fragile.

Equities : What does the French, London, Hang Seng, China, S&P 500 and German stock markets have in common? The answer isn’t that they are all at all-time highs! Years ago the song “We are the world” became popular. The six-pack reflects that the world’s key stock markets are all moving higher together and are attempting breakouts at the same time!

Stocks were mostly higher, with support from strengthening investor conviction that easy monetary policy isn’t going to disappear any time soon. Yen weakening sent the Nikkei soaring to its highest since May. We note that the MSCI Emerging Market Equity Index fell about 6.5% from Oct 30 through the middle of last week.  In the second half of last week, it recovered by 3% and appears poised for additional gains in the coming days.  It closed a little above 1005 before the weekend.  Technically, there is potential toward 1018, before more formidable resistance is encountered.

Once again, the flood of momentum-chasing hot-money provided by the world’s central banks’ printfest is leading investors to push up European equities markets to the highest level since 2011 amid optimism that the region is recovering.  As Bloomberg notes, “investors in Europe continue to buy hope for an upcoming earnings recovery,” investors are entirely ignoring the fact that earnings expectations for the European region are collapsing to their lowest since September 2009. 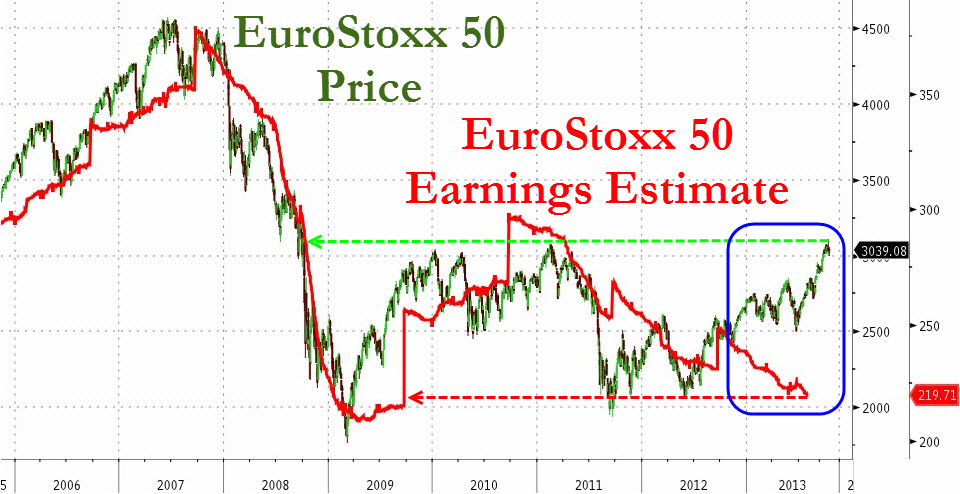 Bonds : Bonds were mixed but generally found support on weak activity data and dovish rhetoric from Yellen.  European sovereign yields were generally slightly lower. Japanese investors, who have been net sellers of foreign bonds this year, has swung to the buy side, with net purchases for five consecutive weeks (through Nov 8) for a total of around $35 bln. Japan’s 10-year JGB yield jumped 4 basis points (bps) last week – a big move for JGBs

S&P, which continues to grant the UK triple-A status, cut France’s rating to double-A last week. We can understand why ratings matter for corporations.  The rating agencies may have access to private information.   We can understand why ratings for many low income economies can be helpful.  The information may be difficult to obtain and might not be followed by many economist.

However, when it comes to the high income countries, that have troves of analysts and economists scrutinizing their economic data, we are skeptical of the value of ratings.  They rely on publicly available information, which is readily accessible. 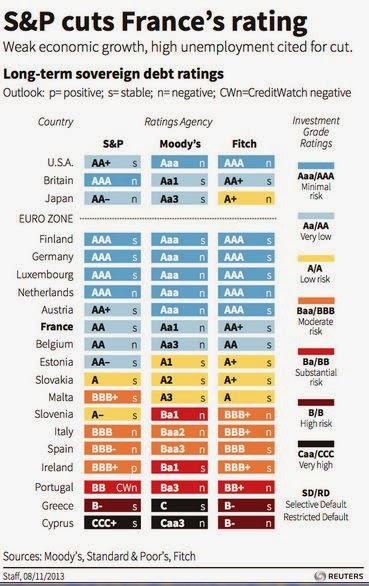 It may be that movement within the high investment grade status is of little significance, but a move out of investment grade would be seen as more serious.  Yet this would seem to be a bit circular as many asset manager mandates have rules about the credit rating, defined by one or more of the top three rating agencies, of their investments.  Those fund managers that are limited to investment grade investment only, may have to jettison bonds if they lost that assignation.

Currencies : Yen weakened markedly after GDP growth was reported to have slowed sharply in Q3.  Japanese Finance Minister Aso made a stronger statement, saying “It is necessary to have the option to intervene in currency markets.” Markets responded by bidding the Yen down 1% against the dollar and down 2% against the euro (the ECB won’t print). JPY topped 100 for the first time in two months. Meanwhile, EUR bounced back a bit from its sharp decline of the previous couple of weeks. Emerging market (EM) currency returns were mixed, but most strengthened against the dollar on Yellen’s testimony.

Commodities : Gold was down 1% before Yellen’s testimony, then rallied to end the week roughly flat. Oil (Brent, a key global benchmark) was sharply higher after the P5+1 talks with Iran broke down and as instability in Libya threated to disrupt oil production in the country again. In contrast, the US oil benchmark (West Texas Intermediate) actually fell for its fifth consecutive week as US crude inventories increased more than expected. 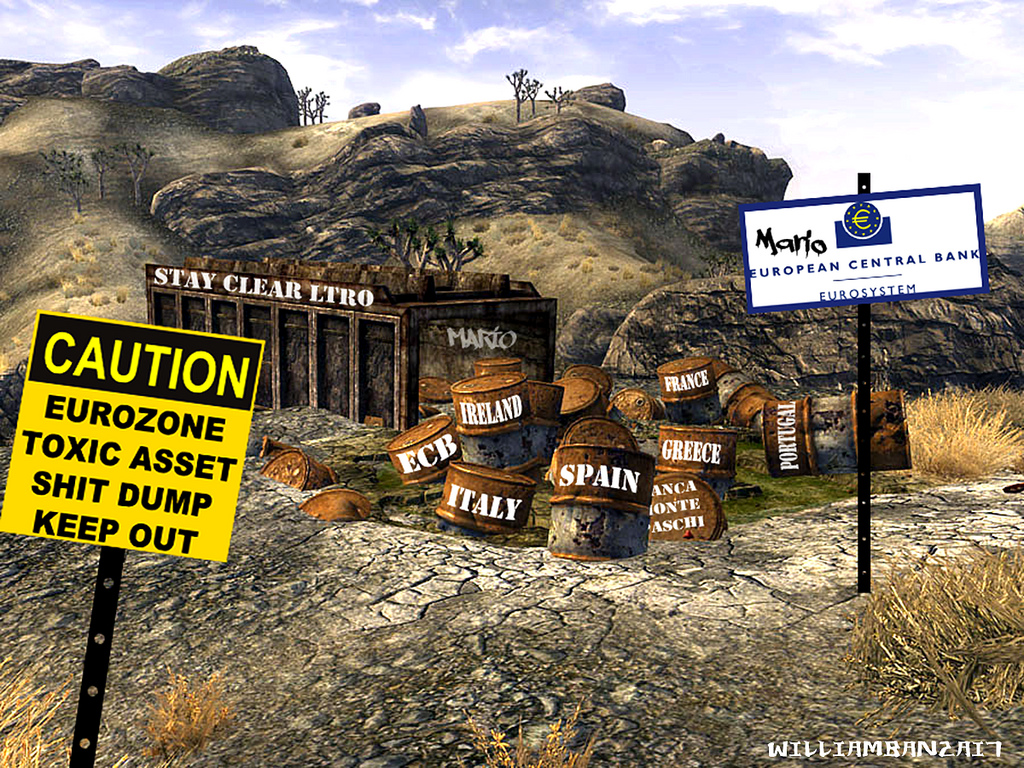