Is the Story of Emerging Markets Intact ?

Two new important macro developments have surfaced recently, which deserve our attention for their likely impact on financial markets:

We believe that the most important issue for investors is not whether tapering will start sooner rather than later, but what will happen to equity markets when interest rates begin to rise, probably next year.  China’s abrupt change of direction of their economic policy can have profound implications for emerging markets (EM) as well as the global economy in future months.

The gloom over emerging markets in general and the BRICs in particular is not really new, but has accelerated over the past few months on the back of decelerating economic growth, street protests and policy mistakes in several large emerging markets, as well as the fear of a start to a reduction in asset purchases in the US (tapering). Investors have been reducing their exposure to EM bonds and equities (as well as developed markets bonds) over the past two months in exchange for Developed markets equities. In order to understand if this trend will continue, we have to look at the causes for the pessimism about emerging markets and optimism about developed markets.

What happened? Indications in mid-May from US Federal Reserve Chairman Ben Bernanke about a moderation in the central bank’s asset purchase program caused fixed income investors who had invested in offshore bonds, particularly in emerging markets bonds, to view the high yields they were receiving in those bonds as less attractive if US interest rates were to rise. In addition, signals from the People’s Bank of China that it would not intervene in the market after a sharp spike in a key interbank lending rate in June raised concerns about the stability of the banking sector there, and further heightened investor concerns that global liquidity could dry up.

A sharp, across-the-board sell-off hit emerging market debt, currencies and equities during the second quarter. Those particular emerging market countries with high current account deficits, large foreign holdings of local bonds and exposure to China were among the worst affected. Turkey, Egypt and Brazil were particularly hard hit; their respective equity markets ended the quarter with declines. In addition, periods of social unrest in these countries also heightened investor anxiety.

So the question is: will a better outlook for developed countries be enough to offset a more subdued growth in emerging markets (EM)?  Given the importance of the Chinese economy and of EM for the global economic picture, we believe that the spill-over effects will not be modest, and that we may be entering a phase of lower global growth.

For the time being, we prefer to remain underweight in EM bonds, which, to us, continue to appear richly valued based mainly on the relatively low credit risk premium. We would like to explore EM equity opportunities on a “value” basis and try to avoid those countries or sectors where fundamentals are still priced for perfection and concentrate instead on selected and attractive valuation stories. We have long argued that considering EM or even just the major countries (Brazil, Russia, India and China or BRICs) as a homogenous investment is a mistake. The macro and micro differences are large enough to allow for big decisions on country and sector selection, especially in a slowing-growth scenario for EM.

For example, within the BRICs, China is not the only country facing macroeconomic challenges, as India and Brazil have been running large current account deficits, which highlight potential currency risks. The recent underperformance of Chinese equities is probably at an advanced stage and thus makes us relatively comfortable with our exposure there. We are well aware that the ability to invest in the right sectors and the right stocks within the country will remain crucial.

Indonesia, Turkey, Brazil and India were among the countries which had seen excessive investment, Investors should not sell emerging markets in an “absolute sense” but should sell relative to other global developments. For example, Mexico could benefit from growth for the neighboring U.S.

Performance of the S&P 500 (white line) and the MSCI Emerging Market Index (yellow line), in a log chart, from the start of last year. 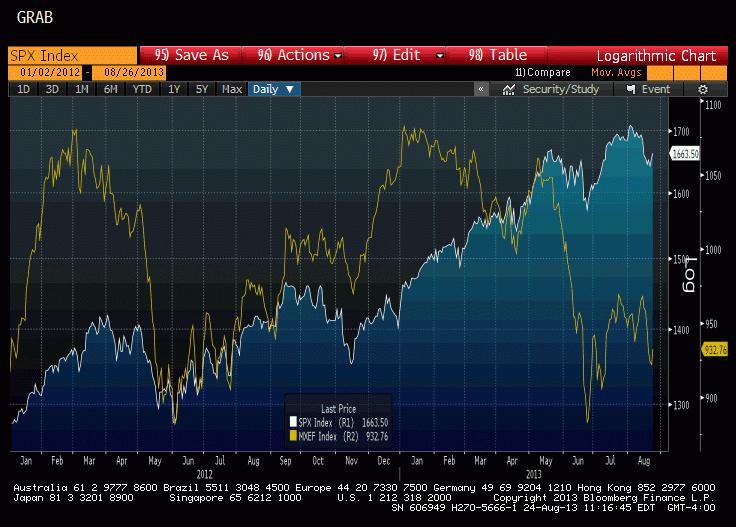 Although a number of emerging market currencies have been under strong downside pressure in recent days, the big sell-off in emerging market equities took place in May and June.  There has not been as much decoupling as it may seem.

Being contrarian or value-driven doesn’t mean we will necessarily buy anything we can get our hands on during a market downturn. During times of extreme stress, liquidity is important. It is important that you don’t buy corpses which have fallen in price but have unhealthy fundamentals (otherwise known as “value traps”), but rather, find patients with good recovery prospects that appear undervalued.

We are finding attractive valuations not only in the BRICs but particularly so in the frontier markets (a subset of emerging markets), which in some cases have single-digit price-earnings (P/E) ratios and even lower price-to-book ratios. (See charts below for emerging markets overall). 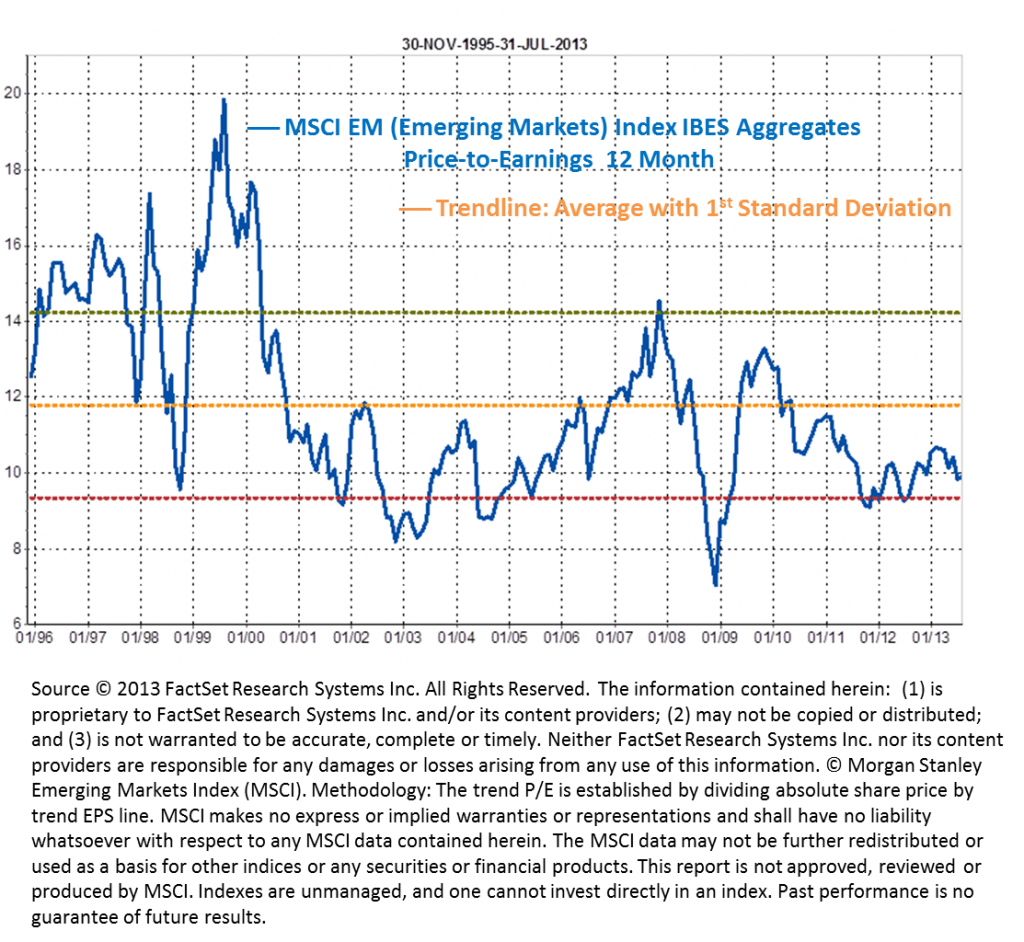 In the short term, the recent massive sell-off of EM equities  is translating into more appealing valuations (both in absolute and relative terms), resulting in a possible rebound from the current level. The main issue, though, is whether the slower than expected growth rate in EM is fully reflected in prices.  Otherwise, we could expect further underperformance of EM stocks and bonds.

Many Emerging Market currencies (notably those of India, Brazil and Indonesia) have been weak since the beginning of May. The declines accelerated sharply in recent weeks, leading to something approaching panic in several markets last week. Much of the sell-off is probably due to the (increasingly panicky) retreat of “hot” money that moved into these currencies seeking yield when the Fed pushed U.S. rates down—emerging market bond mutual funds have seen large redemptions. A second possible culprit/contributor is weakening fundamentals, as slowing growth in China ripples through the commodity-export-oriented economies of ASEAN countries.

The Chinese currency is a notable exception to the pattern of currency weakness: it has risen modestly but steadily against the dollar in the past 4 months. I noted last week that China’s been selling Treasuries—which would support its currency—but that doesn’t seem to be why its currency isn’t falling…rather, its currency hadn’t appreciated as much in the “hot money EM currency rally”…so there’s been a “re-alignment” trade within Asia.

Comment: This feels more like a panic for the time being (too late to sell…maybe time to start buying?) rather than the start of another Asian currency crisis. Fundamentals and currency valuations don’t seem as imbalanced now as they were in 1997…and the fall in ASEAN currencies relative to the Chinese renminbi should help the ASEAN countries recover.

The Case for Emerging Markets

We believe emerging markets in general have three attractive characteristics, which haven’t changed from what we see.

We would not classify this recent bout of emerging market volatility a crisis of confidence as some would, but it marks a good time to again reiterate the value of a long-term perspective and emphasize that we base our analysis and projections not on this year or even next year, but generally five years out in time.

Major Asian economies are no longer the proverbial growth tigers of the world economy. Only China and South Korea are poised for sustainable growth. They also have ample room to support demand and employment. With the exception of Philippines, smaller East Asian economies have shown very weak growth in the first three months of this year. Some, like Thailand and Taiwan, have even recorded a sharp drop in economic activity. 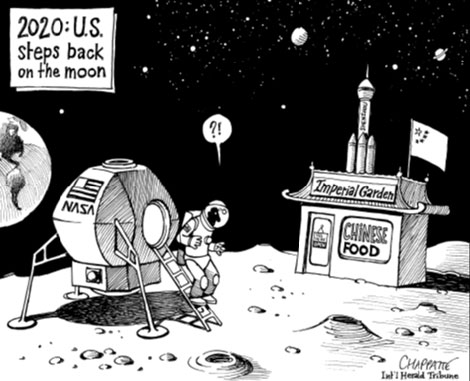