Beginning of the End or the End of the Beginning?


Is the Mining Sector About to Explode Higher? There is opportunity to be had but one must be selective

Most readers will fall into three categories: those who want to know how gold stocks and the word opportunity can coexist in the same sentence; those who have been swayed or afraid to invest in gold and are wondering what to do with their current portfolio; and those who recognize that they can be a contrarian or a victim in these markets and believe that there may be a turn in the market that can lead to wealth.

Today’s market is similar to a replay of a movie that we’ve all seen before. The low sentiment toward gold and gold stocks was also very prevalent in 1999. At that time, like today, you were able to buy reality at a discount. The 1999 market gave rise to such success stories as Southwestern Resources Corp., International Uranium Corp. and AngloGold, all increasing tenfold or more. 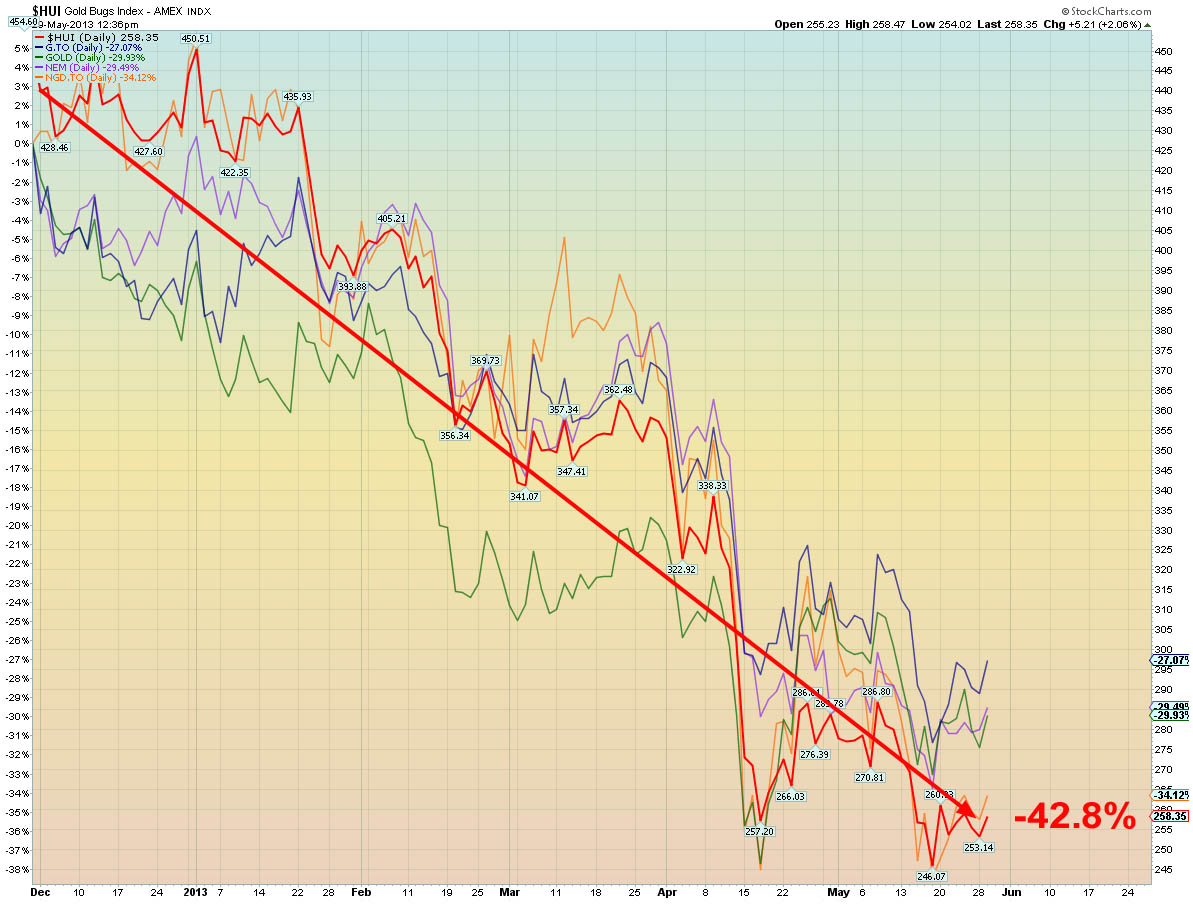 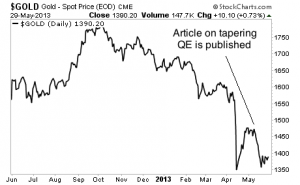 What’s interesting is that the Gold smackdown occurred just a few weeks before the Fed leaked that it was considering tapering its QE program. We know for a fact that the Fed has a tendency to leak critical information to its cronies and connected insiders. Looking at how Gold moved just a few weeks before the word “taper” was picked up by the media, one wonders if the Fed hinted what was coming to the connected few before the rest of us. 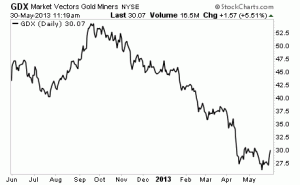 Regardless of Fed shenanigans, the Gold smackdown hit mining companies the hardest. As a result of this, numerous mining companies were trading at only slight
premiums to their cash levels. With no debt on their books you were essentially getting their Gold reserves and infrastructure for free (provided there wasn’t too much political risk).
All you needed was for mining companies to bottom out… which looks to be happening now.

How do we uncover opportunity amidst so much volatility in the marketplace?

Excellent gold stock opportunities are still available in this wonderfully miserable market. Gold stocks represent excellent opportunities to create wealth.
A mine is a depleting asset; every day that goes by while it is in production reduces the size of the business. Legacy assets are becoming strained and long of tooth. They are dwindling, which spells supply disruptions, and therein lies the opportunity. The costs associated with keeping mines in production are increasing and supply disruptions to such important assets are becoming more common place. And this dramatic fall in Gold prices is causing a strategic rethink…there needs to be more focus on getting back to running profitable operations. And re-think they have as many gold companies are re-budgeting and rethinking larger operations to see what they can do to cut costs.

Our dwindling legacy mines are in urgent need of being replaced by new discoveries. So, where are they? 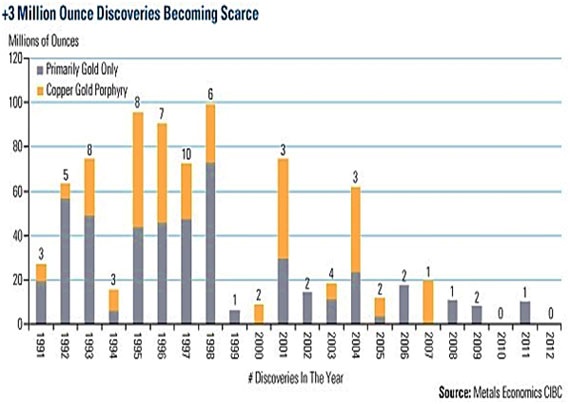 The chart dramatically shows that this industry has seen an acute lack of significant discoveries in the recent past. Meanwhile, the industry is chugging through more than 80 Moz gold, 680 Moz silver, 15 million tonnes of copper and 90 million pounds of uranium annually. These depleted reserves need replenishment. And, in today’s challenging economic environment, the quality needs to be higher.

Discoveries made in the mid- to late 1990s are largely due to the increased financing activity that took place 10 years earlier. Funding comes 10 years ahead of discovery activity. The poor discovery rate of today is relative to the poor market conditions and lack of funding we suffered in early 2000s. Since that time, funding has ramped up, notably between 2005 and 2007. If this cycle holds true—let’s call it the circadian rhythm of mining—then we may be directly in front of a renewed exploration and discovery cycle.

Going forward, high-return deposits will be key. The seniors have not spent money on exploration, leaving them with only one place to turn. . .the juniors.

These criteria form the “must haves” when choosing gold shares that will yield the best returns. These criteria represent the tip of the iceberg. This is really just the beginning of your homework assignment in making your stock selection. Understand that the performance of this sector is really dependent on only a handful of stocks. The outstanding returns of the few derive benefit to the many.

The Pareto Principle is firmly at work here—80% of the gain is derived from 20% of the stocks. Finding that 20% is key.

Shine returns to platinum and palladium

Historically, it has paid off to first identify which of the seven will be the leaders of the next cycle, and then properly time the purchases. 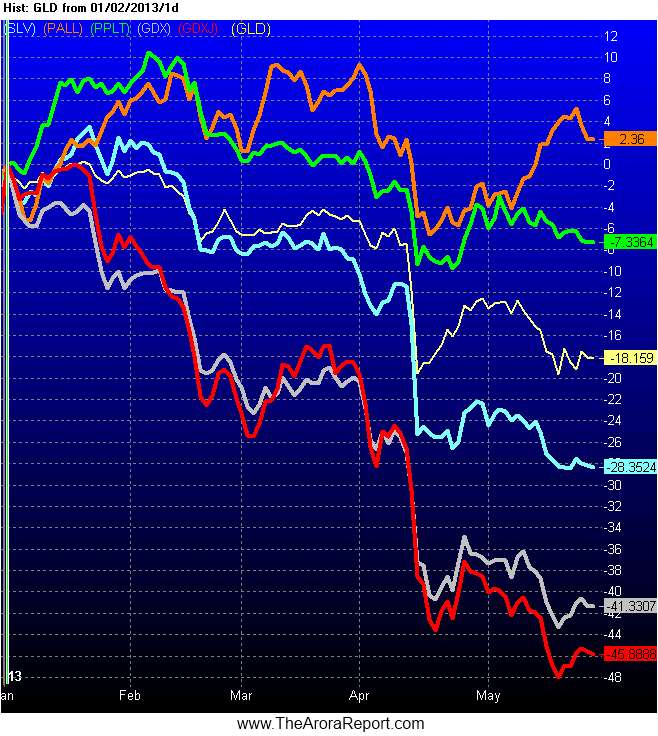 About 80% of platinum is mined in South Africa. At present, mining platinum is very labor intensive. The platinum ore does not easily lend itself to mechanical methods commonplace in silver and gold mining. Additionally, South Africa is torn with labor strife. In 2012, 50 people died in violence related to strikes at platinum facilities. As hard as the South African government is trying, a complete peace with labor is still not completely at

The point is that supply will be constrained.

Most of the world’s palladium comes from South Africa and Russia.

In the 1970s and ‘80s, Russia stockpiled lots of palladium. Lately, Russia has been selling palladium from its stockpiles into the world market. However, the Russian stockpile is rapidly becoming depleted. In 2010, Russia sold one million ounces from its stockpiles. This year, sales from the Russian stockpiles are projected to be only 200,000 ounces. Almost all of Russia’s palladium is produced by Norilsk Nickel as a byproduct from nickel mining. Norilsk is beset with falling ore grades and environmental problems.

Palladium production in South Africa is being affected not only by labor supply but also by electricity shortage. Palladium and platinum mining is energy intensive.

Just like platinum, palladium is relatively scarce. Only 6.9 million ounces were mined in 2011.

Palladium demand will exceed production by 511,000 ounces in 2013. Platinum demand is also likely to be slightly ahead of production. The main reason behind the increase in demand is the increase in car sales. Indians, Chinese, and Brazilians are getting rich. They are buying more cars. It is projected that in 2013, 82.7 million cars will be sold worldwide. A typical catalytic converter in one of those cars contains about four grams of palladium, platinum, or rhodium.