GOLD – From the Situation Room

There has been a major shift in investor attitudes around the world toward gold and silver. Investors remain interested in buying and holding these metals against a wide range of possible political, economic, and financial crises that could shake their personal financial positions, but they have have shifted from a fear-driven attitude that they have to buy gold and silver today regardless of the price because the world’s financial system is going to collapse tomorrow, to a more nuanced realization that their worst fears are what we already are seeing: A protracted period of reduced real growth, higher unemployment, structural debt, deficit, trade, political, military, and other imbalances that threaten economic stability worldwide, low interest rates, and weak overall economic performance as Europe, the United States, and Japan slowly pays down the debt built up over the past five decades. In that environment, investors have become price-sensitive: They buy on dips and pull back when prices rise.

PIMCO On Gold – The Simple Facts

Short term overbought it is our view that from January 2013 on we will start the next Bull Leg in this continuing Bull Market.  So, get ready to deploy some of that cash you have been holding back when Gold and Silver start testing support. 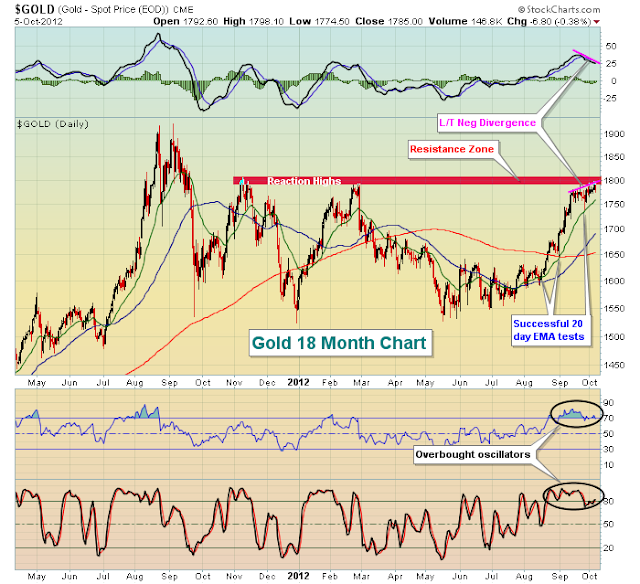 First, gold is definitely overbought, so a near-term unwinding of both the RSI and stochastic is to be expected.
Second, a fairly significant area of price resistance has been reached. The reaction highs in November 2011 and February 2012 both failed between $1790 and $1810 an ounce. We saw three intraday highs last week in the $1790s. Finally, traders need to deal with slowing momentum.